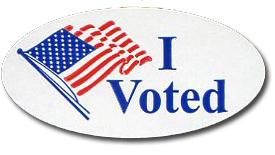 After being raised in a household free of overt political discussion, I never had any idea which political party was mine. A moment of clarity arrived in eleventh-grade Physics class when a fellow student named Jeff sought to offer me personal definition: he asked me my views on abortion. I gave him an answer. He told me which party was mine. To him, it was as simple as that. I decided then and there that the two-party monopoly left a lot to be desired. Thus was my head sent spinning into years of aimless political apathy, college-campus pluralism, irritatingly noncommittal neutrality, alternative-newspaper perusal, and Jello Biafra spoken-word albums. Truly it was a time of intellectual isolation for me, though the accompanying music could be cool at times.

Two decades later, I’m no more into taking arbitrary sides, generalizing entire parties based on the actions of a single faction, or collecting campaign buttons than I was in my misanthropic youth. However, at least now I can say I’m participating in the voting process anyway, because the small local elections are close enough to home that the votes really can make a difference, free of interference from unhelpful interlopers like the Electoral College. Also, just because I can.

END_OF_DOCUMENT_TOKEN_TO_BE_REPLACED

The Indiana State Fair is a great annual celebration of Hoosier pride, farming, food, and 4-H, with amusement park rides and big-ticket concerts by Top-40 or country artists. My son decided long ago that it wasn’t his thing anymore, but my wife and I attend each year as a date-day to seek new forms of creativity and imagination. Mostly that means culinary concoctions that shouldn’t exist but do.

First, foremost, and most unfathomable: the “Elvis” — a bacon peanut-butter banana burger.

It sounds heinous, but wasn’t all that bad when you realize bananas and Jif Creamy peanut butter aren’t exactly sharp-flavored foodstuffs. They made the sandwich richer and creamier, for what that’s worth. If you remember that banana is a tropical fruit, pretend that the salt on the burger is like sea salt, and imagine that the bacon is reminiscent of a roast pig at a luau, then you could tell people it’s a Hawaiian Paradise Burger. Rationalizing the peanut butter might be trickier.