We talk, joke, and moan all the time about Hollywood’s constant reuse, recycling, and rebooting of the movies and TV shows of our childhoods and of the childhoods before ours. We enjoy, or just as often roll our eyes, when today’s musicians cover or sample all the favorite songs of previous generations to present echoes of them to new audiences repulsed by old stuff, regardless of its anointed “classic” status.

Last month we found one artist who asked: why stop with cannibalizing the works themselves? Why not repurpose their very containers? What if you take all those shiny, reflective objects that served as portals into our homes for Hollywood and the record labels alike, and converted them into brand new, abstract doorways to imagination?

END_OF_DOCUMENT_TOKEN_TO_BE_REPLACED

The centerpiece of the Indiana State Museum lobby is the “Indiana Obelisk” –at just under fifty feet. the tallest sculpture to date by artist Robert Indiana.

Previously on Midlife Crisis Crossover: throughout 2016 my wife and I spotted and compiled a number of sights related to the 200th anniversary of our own Indiana earning statehood, nineteenth in a series of fifty, after Louisiana but before Mississippi, Illinois, and Alabama. Between this year’s State Fair and the one-time Hoosier Homecoming, we had ample opportunities to learn more about our heritage, celebrate the achievers who paved paths for generations ahead, reassert reasons for hometown pride, and transcend that one time Indiana Beach amusement park actually had as its official ad slogan, “There’s More Than Corn in Indiana!” Because once upon a time, that was a thing we had to insist.

Earlier in December we attended one last commemorative event: a temporary exhibit at the Indiana State Museum called “Indiana in 200 Objects” assembling artifacts and souvenirs from Hoosier celebrities, businesses, industries, and moments both famous and infamous. Presented here is just over one-tenth of the available displays — a selection of those that caught our eye, spoke to us on some level, and posed properly for our amateur cameras. Not every sight was a wellspring of unlimited positivity (one could argue for trigger warnings on two of these images for more sensitive souls), but even the darkest relics can illustrate how far we’ve come and help us gauge how much farther we have to go.

END_OF_DOCUMENT_TOKEN_TO_BE_REPLACED 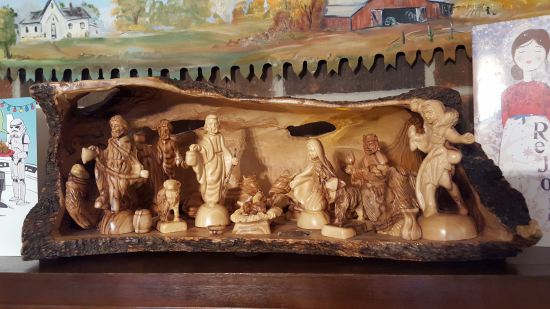 The prettiest among my in-laws’ Nativity scenes, a handicraft find on one of their small-town expeditions, which they’ve surrounded with a selection of this year’s Christmas cards. I didn’t realize till a few minutes ago that the card we sent them tried to sneak into the shot.

Christmastime is here, basically! With last-minute shopping to do, relatives to visit, presents to give, and fresh-baked cookies to overdose upon, sleeping in heavenly peace may be an unattainable luxury during our three-day weekend. As we’re finalizing our plans and preparing to dive in, please enjoy this gallery of memories from our past four weeks foreshadowing the upcoming celebrations of Jesus’ birth (observed) and all those’ll entail, Lord willing.