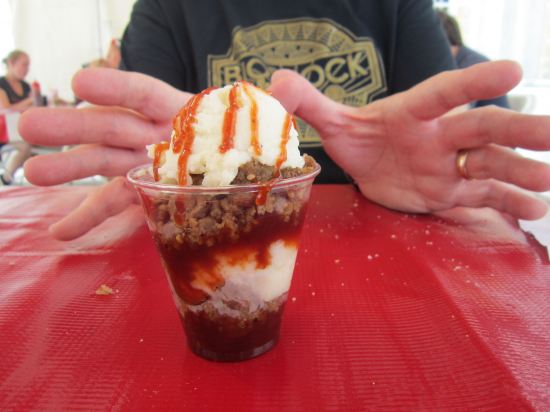 This is not ice cream. That’s not chocolate.

It’s that time again! The Indiana State Fair is an annual celebration of Hoosier pride, farming, food, and 4-H, with amusement park rides and big-ticket concerts by musicians that other people love. My wife and I attend each year as a date-day to seek new forms of creativity and imagination within a local context. Usually, 70% of our quest is food.

Each year the State Fair announces the annual theme of a single ingredient and holds a contest daring all the vendors to create a new dish around it, like a sort of Food Network cooking show except I think the grand prize is just “for exposure”. Recent history has brought us the Year of the Tomato, the Year of Corn, the Year of Soy, the Year of Popcorn, and last year’s disappointingly non-food-based Year of the Coliseum, in honor of the longtime event venue that had reopened after a two-year closure for extensive renovations. This year’s theme was “the Year of the Farmer”, a.k.a. “the Year We Ran Out of Food Themes”. For anyone who thought “the Year of the Coliseum” wasn’t directionless enough, 2015 had only a handful of the many vendors offering a random, disconnected assortment of ostensibly new dishes, at least one of which was flat-out pretending to be new.

We tried to make the most of it anyway and found a few items worth actual dollars.