When I was a kid, Expo Hall was one of the most interesting buildings to visit at the fairgrounds. Back in those days, various small businesses (indie shops, booksellers, home repair services, satellite TV providers, educational toys, and so on) lined up booths in the hall and gave out tons of promotional freebies — free pencils and pens, free stickers, free candy, free rulers, free flimsy coloring books, and so on. As an adult I lost enthusiasm when company reps stopped the freebies and focused their energies on annoyingly intrusive huckstering and hard sales pitches for boring products, with one or two exceptions. Last year the booths were noticeably sparser, longtime welcome participants like the great South Bend Chocolate Company were nowhere in sight, and those who did show up seemed more desperate and/or shady than ever. The childhood charm was next to nonexistent, and the place was probably about 1-2 years away from takeover by NFT shills.

It’s therefore hard to blame State Fair officials for shaking up the status quo and trying something completely different this year. All the salespeople were ejected from Expo Hall and replaced with a different kind of spectacle: baby farm animals!

I’d heard before our arrival that the fair had added a new feature to the hall called Momma Town, something involving animals. We were unaware that’s all the hall now contained. The premise was simple: small farm animals in cages and pens. Come in, look around, ooh and aah, drag your kids back out the exit. As for the old concession stands? The free eyeglasses cleaning stand? The Gideon Bible people? The neck massages? The electric bendy mattress sellers? The free cooking demos? Master’s Hand BBQ? The Bureau of Motor Vehicles license renewal and voter registration kiosks?

Momma pig and her litter.

Llamas were the tallest animals around.

Caged rabbits remind me how the Indianapolis Zoo used to feel back in the ’70s before they upgraded to the more humane free-range habitats. 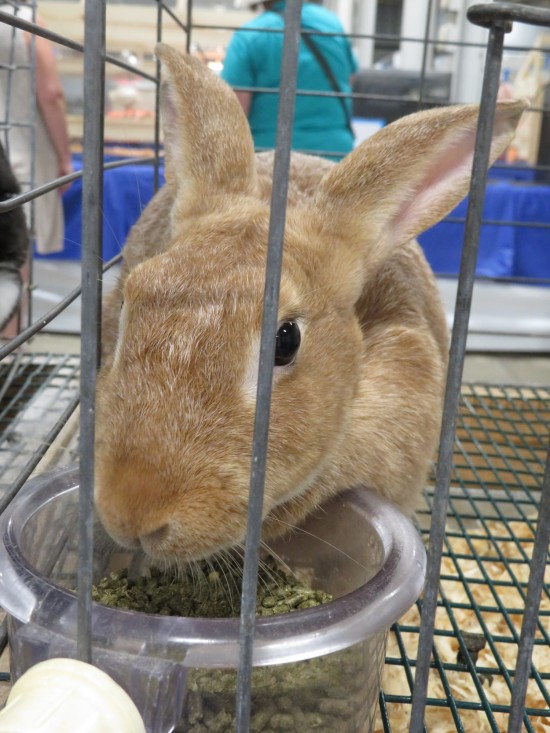 Possibly the king of the cell block.

Bunny’s escape plan is to flow through the bars like a T-1000.

This chicken once shanked a dude just to watch him die. 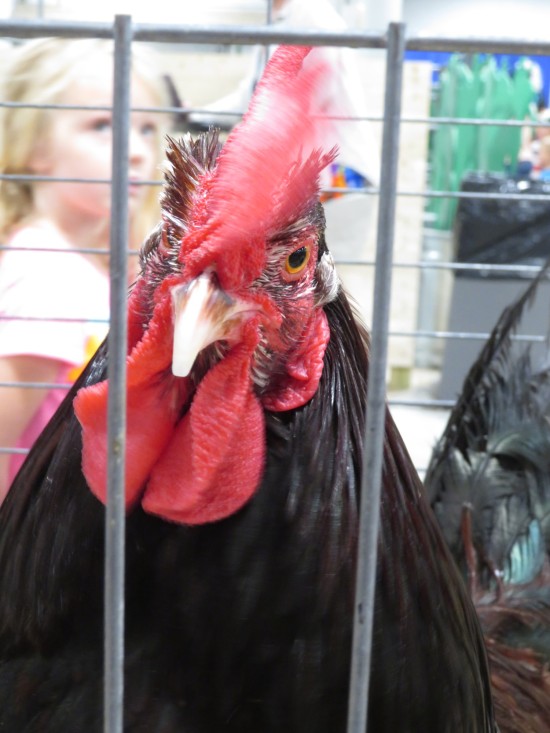 Q: What do they call it when those gears a-turnin’ in a chicken’s head go and have a meltdown? A: Rooster Cog Burn.

Where all the chicks are at.

WARNING: Agrotourism May Be Hazardous to Your Health. Participant Discretion Advised. Walking in Here Constitutes Waiver of All Our Liabilities.

That’s very nearly all the animals we saw. As for the rest of those thousands of square feet… 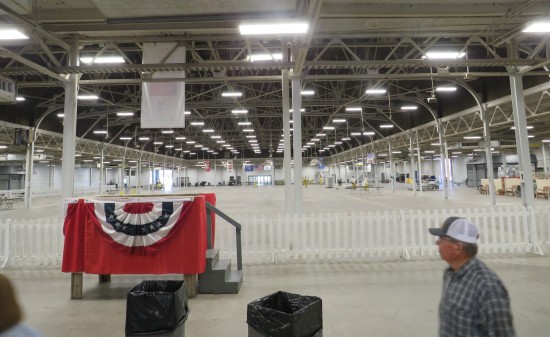 …nothin’. Maybe on other days they had animal judging, animal stunts, animal trivia contests, or fairground worker fight clubs. As of the last Thursday of the fair, over half the Expo Hall was fenced-off dead space. It’s understandable why they wouldn’t line the remaining acreage with the usual Expo Hall tenants. Nobody wants to ply their wares while steeping in animal stench.

By way of communicating their radical allocation changes, officials had signs placed at the front of the Expo Hall advising us attendees that some of those vendors had been relocated to the AgHort Building, which used to be exclusively devoted to produce competitions, honey, bonsai, scarecrows, the annual cheese sculpture, and other farm-adjacent collections. For 2022, nearly two-thirds of the AgHort Building now housed former Expo Halls refugees — a fraction of what used to show up. But their relocation made it possible for the Expo Hall to be reinvented as yet another animal exhibit to go with the many, many, many, many barns and other animal enclosures found all around the fairgrounds.

I can’t decide whether or not I’m complaining.

To be concluded! Other chapters in this very special MCC miniseries: