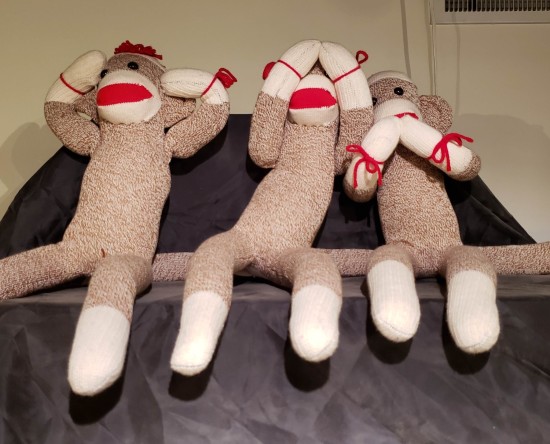 Sock monkeys performing the classic “See no evil, hear no evil, speak no evil” sketch like all your favorite politicians.

Show of hands, who’d be excited to visit a sock museum? Complete lack of hands, right? But what if the socks were turned into sock monkeys?

Some things are all about presentation.

After passing through Wisconsin with only two stops — between which our sluggish but unanimous family voted to skip the Dells altogether this time — we ventured into cozy, familiar old Illinois and toward the city of Rockford, where we’d be staying for the final night of our vacation. I had a short list of potential attractions to check out, but due to exhaustion — and, if I recall correctly, due to potential road obstructions from downtown events — we chucked nearly the entire list except one place. It seemed harmless and sufficiently cute and benign for us, so we could say we did something with Day Nine.

Rockford’s Midway Village Museum is one of those specialist organizations devoted to local history, mixing familiar olde-tyme objects with native achievements and memorabilia they can claim as their own. Their website encourages guests to “explore Midwestern life as it was during the early 1900s”. We’re from the state next door. The Midwest is not an exotic subject to us. However, Rockford can boast of a claim to fame that we can’t: they’re the Home of the Sock Monkey. Since 2008 the museum’s largest exhibit has been “The Missing Link: Socks, Monkeys and Rockford’s Industrial Past”. Someone’s working on opening an official Sock Monkey Museum in another town northwest of Chicago, but as of July 2021 they were neither finished nor along our route.

I have no idea whether The Kids These Days are familiar with sock monkeys. I promise they’re a thing, and have been to varying levels of homespun ingenuity since the 1870s. They remained a patchwork sort of invention until after the Nelson Red Heel socks came around circa 1932 in the wake of the Great Depression as a sort of folk art. Their specifically odd socks paved the way for standardization in the sock monkey design community. The full story is much more exhaustive and available online in a 46-page informational packet with a documented history of sock monkeys and instructions for how to make your own, both the monkey-sewing steps and the sock manufacturing machinery blueprints. You’ll understand if I decline to summarize all that here.

To do sock monkeys right requires using the Nelson Red Heel socks as your primary materials, produced at Rockford’s own Nelson Knitting Factory. Done correctly, your sock monkey will have the distinctive cross-threaded speckling that looks like its skin is tuned to a TV channel that went off the air at midnight, the gaping mouth made from the sock’s heel in the same color as hope-my-boyfriend-takes-me-back lipstick, the digitless paws and feet they flail around to catch your attention, and those black eyes too full of meek self-pity to peer into your soul. Sock monkeys: they need your help to live! 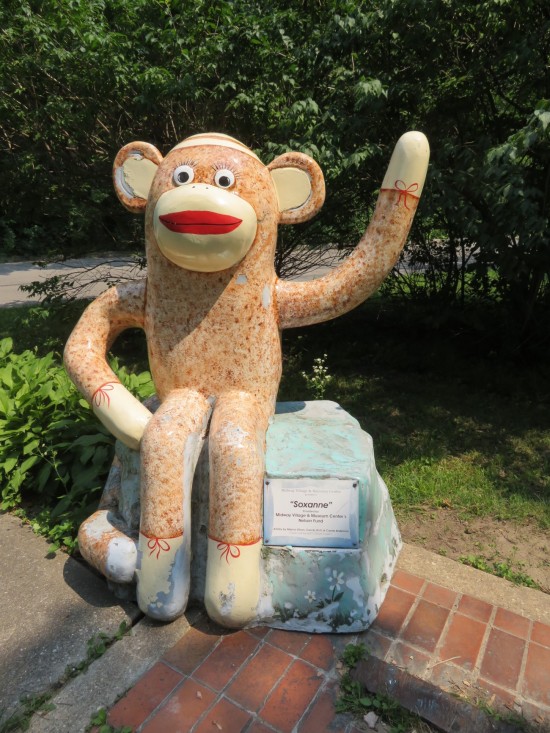 Soxanne, one of several giant fiberglass sock monkeys, is first to welcome you in the parking lot. 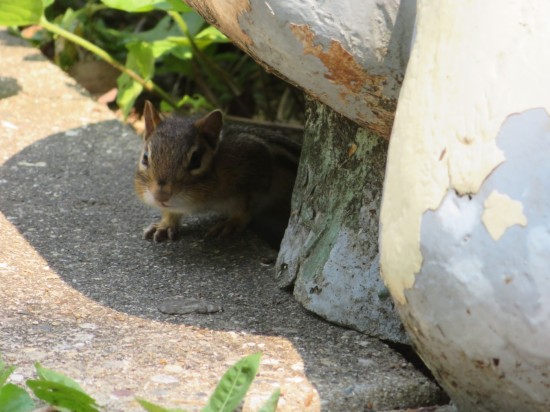 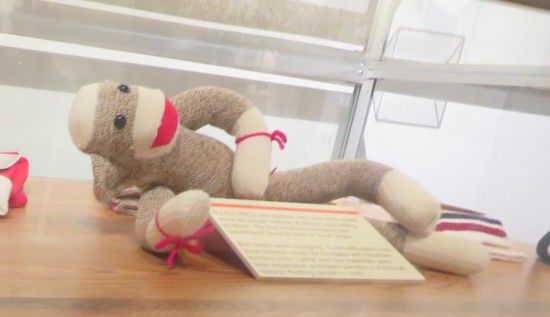 A basic sock monkey tries to be alluring to new generations. 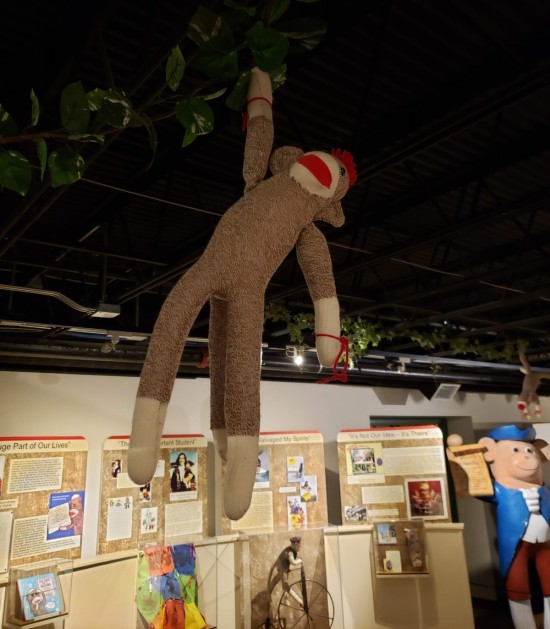 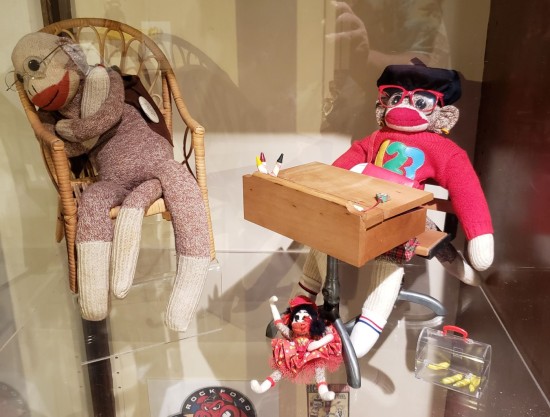 Sock monkeys can play a variety of characters, much like your average SNL vet but on cheaper salaries. 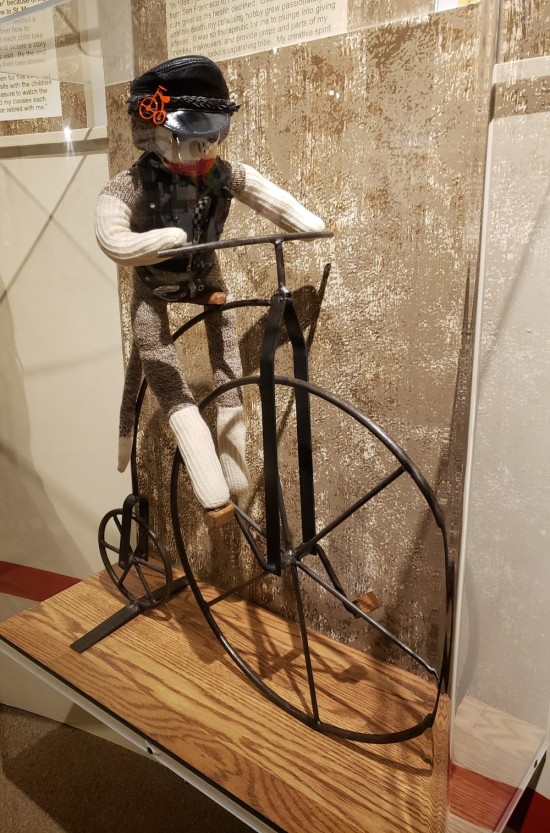 Not the first high wheeled bike we saw on this trip. 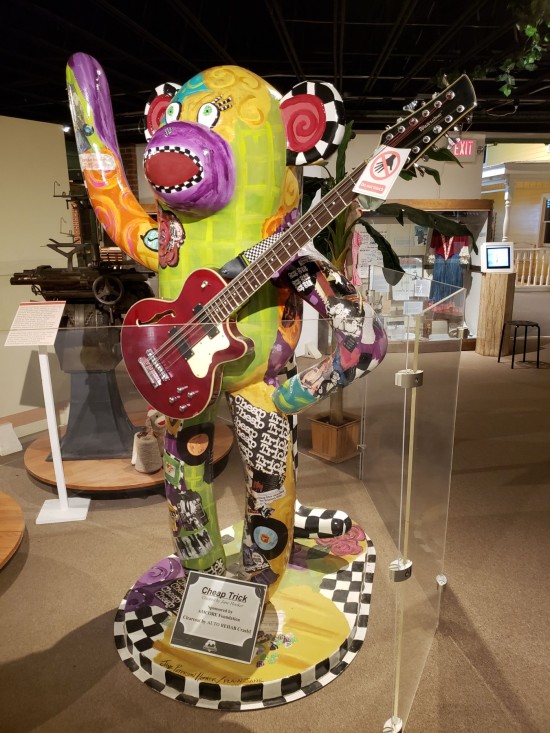 Among the giant fiberglass sock monkeys, Best in Show was this salute to another group of Rockford’s hometown heroes, rock legends Cheap Trick. 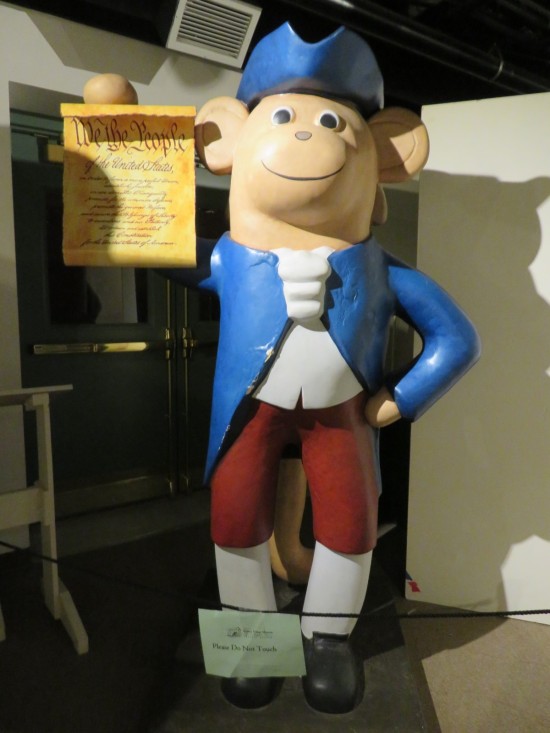 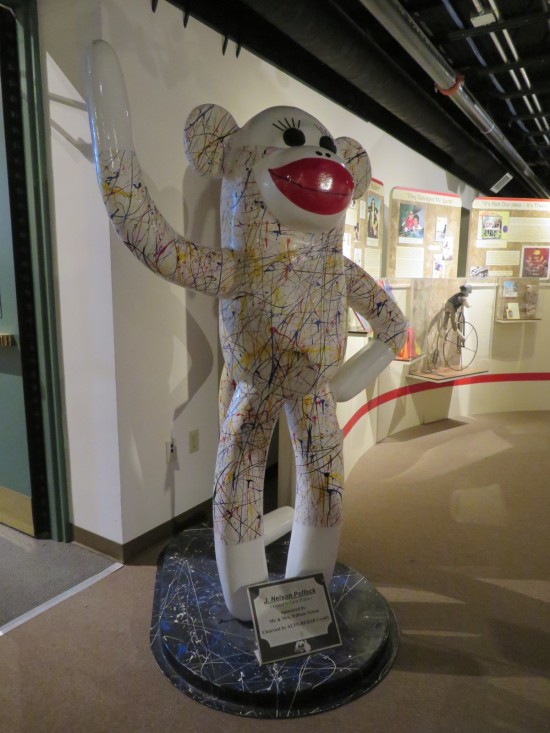 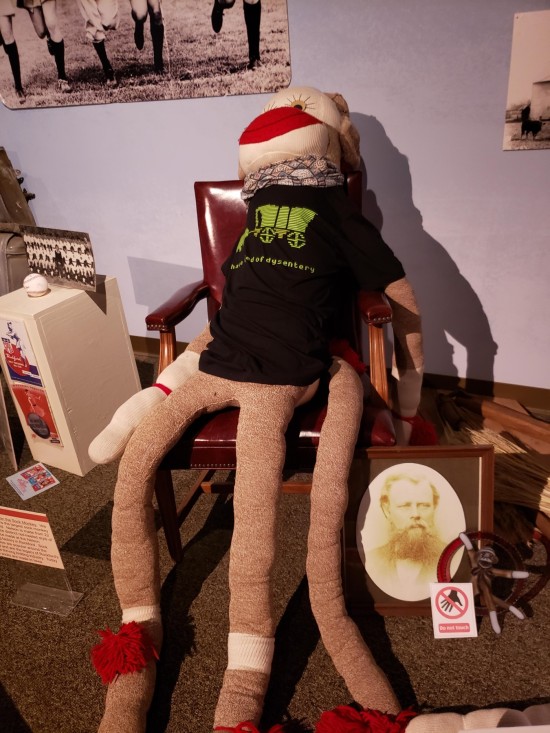 Nelson here is the World’s Largest Sock Monkey, at 7-foot-2 and built from 22 pairs of Nelson socks. After our nine days on the road he looked like how I felt. 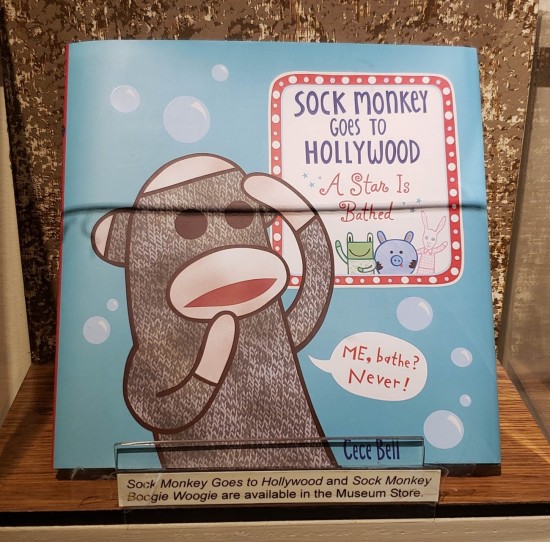 Sock monkey literature is available in the gift shop, though I didn’t see any of Tony Millionaire’s NSFW Sock Monkey graphic novels. 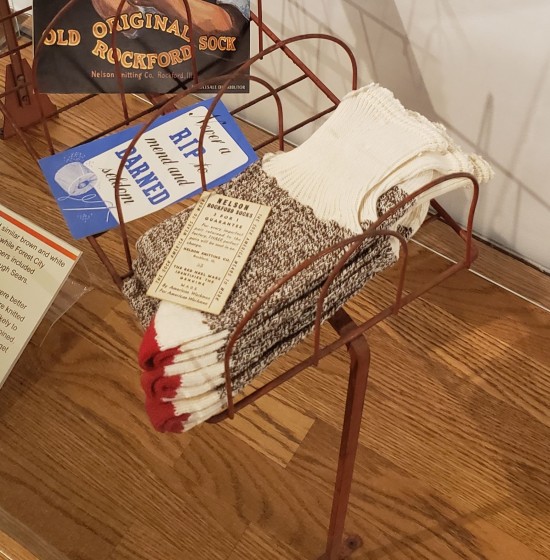 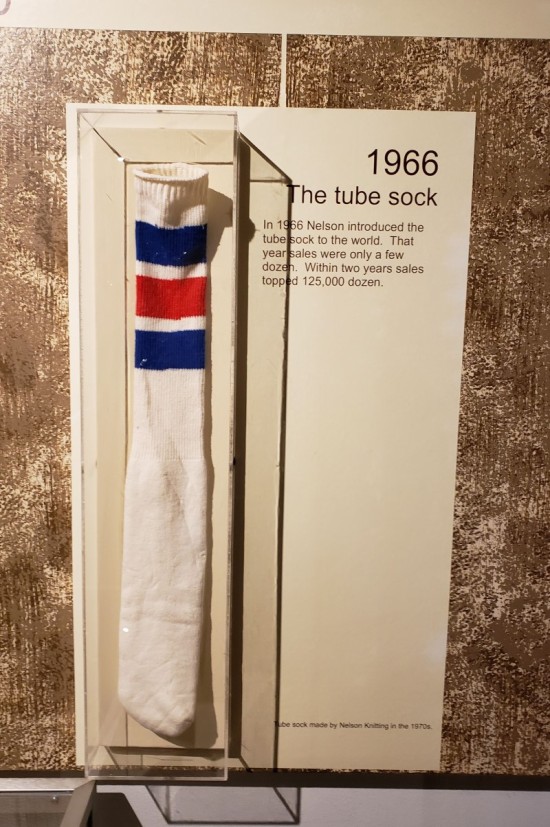 Nelson also pioneered tube socks back in 1966. You can also make monkeys from those, I guess, if you must. 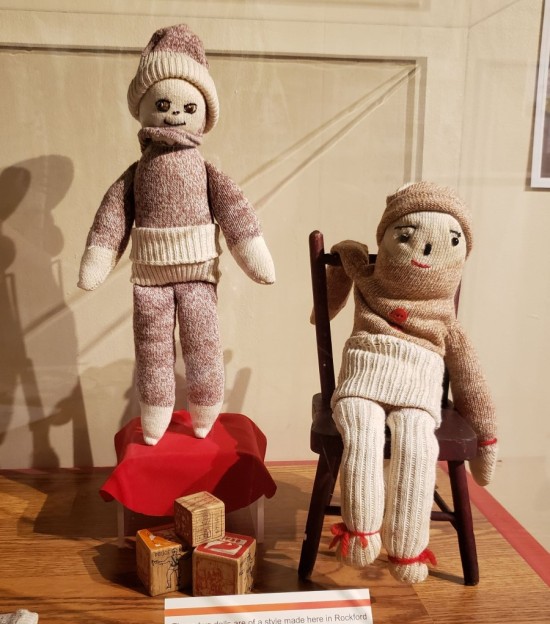 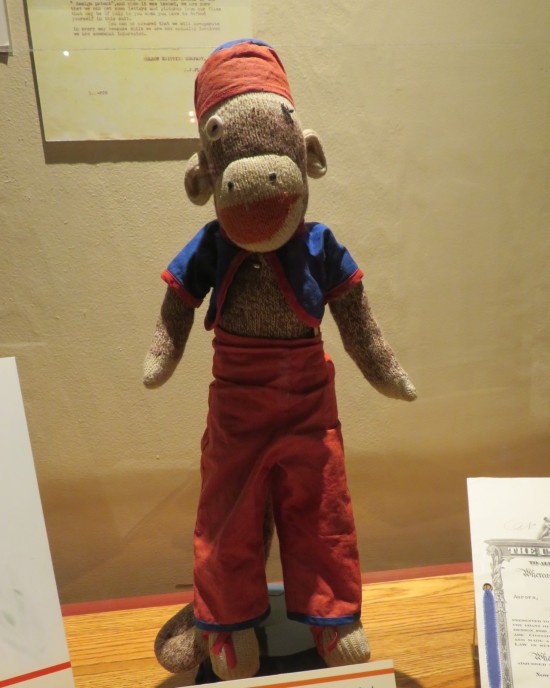 This 1951 homemade prototype was a crucial piece of evidence in a contentious lawsuit against a 1953 would-be patent holder. 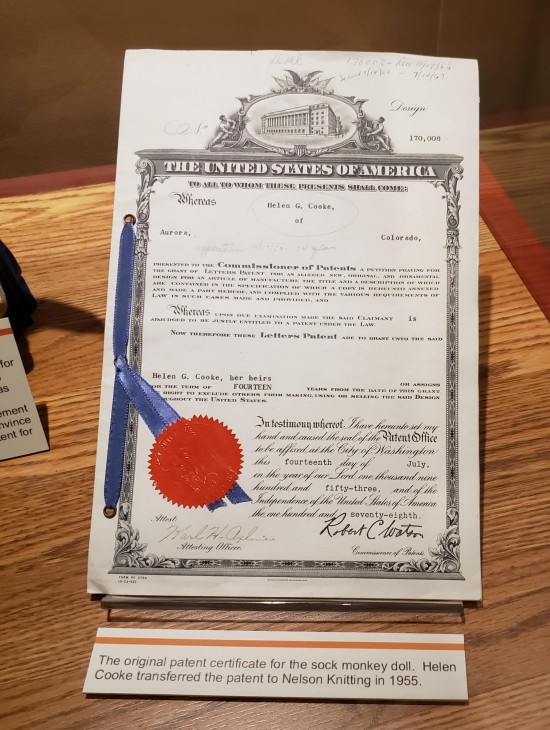 The official patent papers secured by the company in 1955. Accept no substitutes.

The Nelson factory found other places in history. They made socks for the military, including for at least one World War. Theirs were the Official Socks of many an organization and sports team. Rockford itself had other memorable moments to share. Mostly we were there for the sock monkeys, but we looked around a bit more. 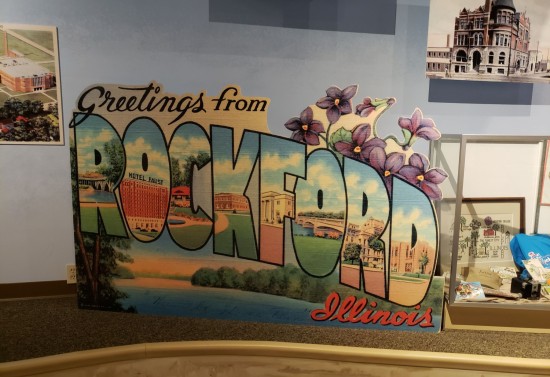 Rockford welcomes you to the other half of the museum. 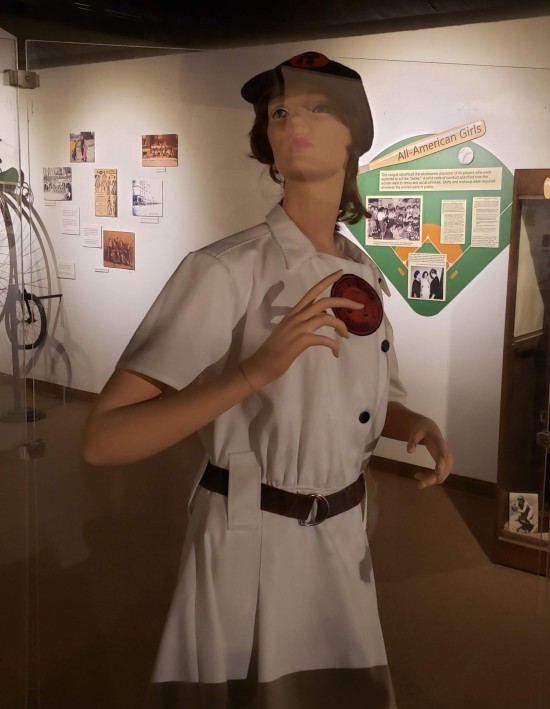 Uniform from the Rockford Peaches, their women’s baseball team (1943-1954) that won the 1945 league championship and appeared as rivals in A League of Their Own with some historical errors. 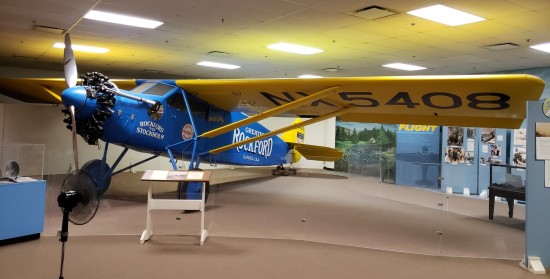 The Greater Rockford plane, which in 1928 attempted a flight to Stockholm but ran out of gas over Greenland. It was returned 40 years later. 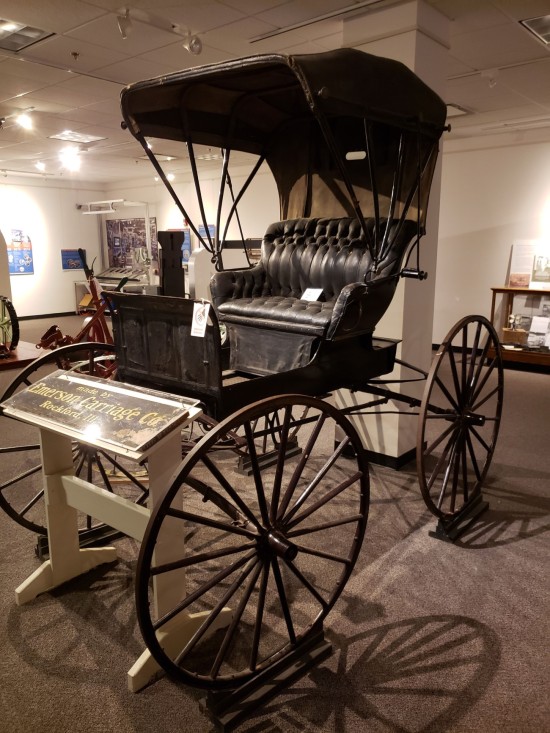 Other local products of note included the Emerson Carriage. 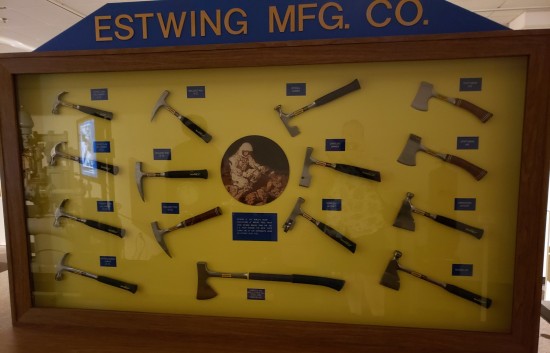 The Estwing Manufacturing Company made an array of geology tools, some of which were used during our 1969 moon landing mission. 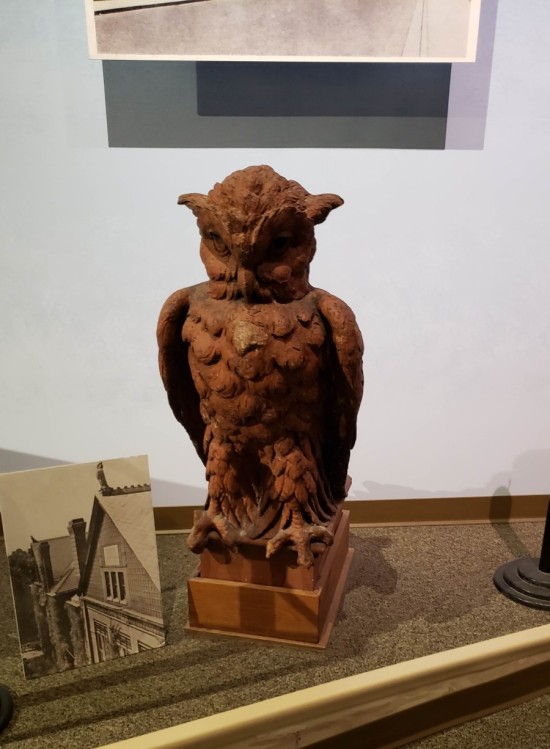 Also made nearby: this creepy owl that used to sit on some building and judge all humanity. 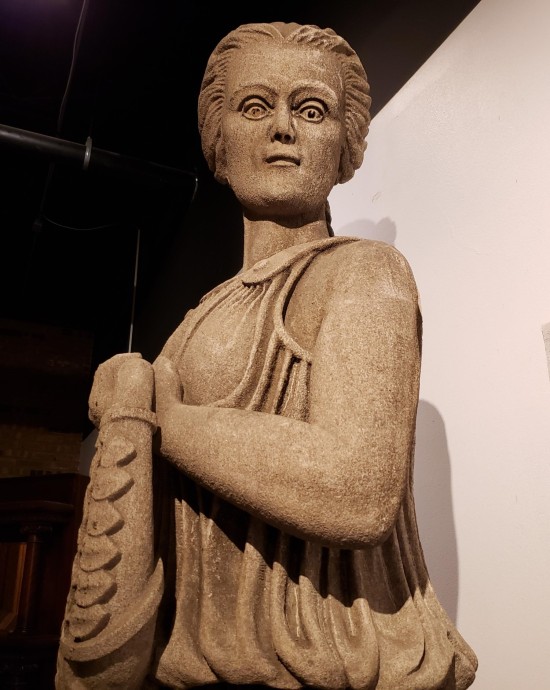 Even more judgey: this 1878 Charity statue that once perched upon the old Winnebago County Courthouse roof. On weekends she’d moonlight as a Doctor Who villain called the Judging Angel.