Officially the highest buffalo statue we saw on this trip. Eventually we’d see a real one at a higher elevation, but for now this would have to do.

Our next stop promised a giant pit filled with centuries of accumulated fossils jammed into one cramped space. In my mind we were about see a Sarlacc but with thousands of jutting bones instead of spiky teeth. My preconceptions may have been unfairly fanciful.

Once Anne and I were done getting in more than a day’s worth of steps around downtown Rapid City, we returned to the hotel, collected our belongings and my son, stopped for sundries and prepared to exit South Dakota at last…

Sample panorama on the way as we exited South Dakota, never to return for the rest of the year.

Intro to Wyoming, where we’d be passing through for the next 400+ miles.

As schoolkids are generally taught, to the indigenous populations out west the buffalo was their superstore — a one-stop grocery, hardware store, department store, beauty shop, and armorer on four legs if you knew which parts could be repurposed for which needs. Rather than waste perfectly good raw materials on single-use hunting weaponry and ammunition, numerous Plains Indians tribes in the area shared a practice of routing buffalo herds into deep sinkholes and other natural depressions. They let gravity do the killing for them, climbed down inside, extracted the parts they needed from their quarry, and left behind the remains as a sort of community landfill, with no need to invent dump trucks to do any heavy lifting for them. Another shocking truth revealed here: they didn’t always use the entire buffalo. Otherwise there wouldn’t be buffalo remains and this chapter would not exist.

In the ’70s one such sinkhole was discovered when I-90 was being carved through the beauteous, previously unspoiled terrain. I-90 architects agreed to bend the path slightly south of the find to preserve it. The Vore family of farmers, who’d been working the lands since the 1880s, donated the relevant acreage in 1989 to the nonprofit foundation now in charge of it. An hour west of Rapid City and not far from the Black Hills, that hole is now an archaeological site called the Vore Buffalo Jump. 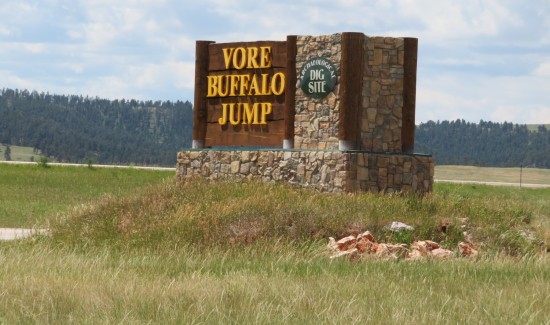 Their official signage, within skipping distance of the interstate.

Their modest parking lot is off a dusty access road. 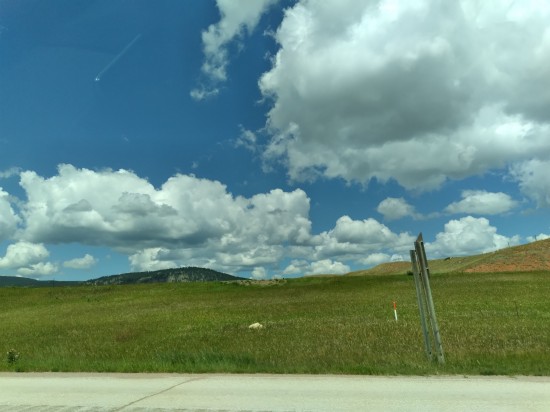 The nearby landscape, among the hundreds of potential Windows wallpaper shots now in our collection.

Some estimated 4,000 bison were herded into the Jump between 1500 and 1800 A.D. It’s a wealth of fossils and indigenous artifacts, of which maybe 10% has been excavated to date as fundraising and manpower have permitted. Research slowed a bit when key personnel retired a while back, but sometimes interns will enable a bit more progress. Civilians can come gawk at a remove and receive a limited tour-guide intro for free, as we saw them perform for a pair of hardy power bicyclists who’d pedaled dozens of miles out to the middle of mostly nowhere for the opportunity. From June through August, an admission fee earns an up-close look at the dig itself.

After paying dues at the plain wooden gift shop, guests are escorted to the teepee-shaped visitors’ center that was added to the property in 2013 as an introductory exhibit area, featuring gorgeous hardwood interiors as seen in our lead photo. Docents lay down context and show off a selection of arrowheads and other artifacts before descending into the dig itself.

That visitors’ center. Much like our rental car, it was bigger on the inside.

We didn’t photograph the arrowheads because we’ve seen those before at myriad museums, but other special features included this animal-skin map of the local waterways.

The feature presentation is at the bottom of the sinkhole. The building around the site was another new addition within the past decade. 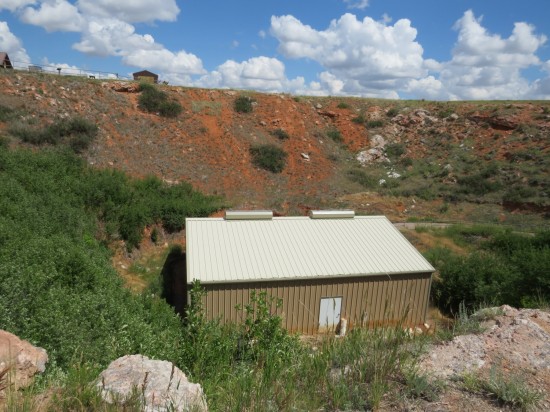 Farther down the spiraling path, you can see the northern side of the sinkhole and make out a bit of the varves that help with dating the findings. 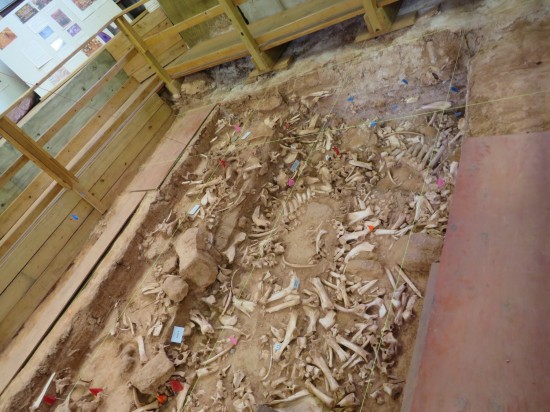 The official dig site in all its bony verisimilitude.

The closer you look, the more bones that even us laypeople with rudimentary anatomy knowledge can identify.

Every dig photo can be turned into a fun family game of COMPUTER, ENHANCE IMAGE to see what you recognize.

The deep end of the dig. For now. Pending further funding. Their newsletters provide candid detail on the latter for accountability’s sake. 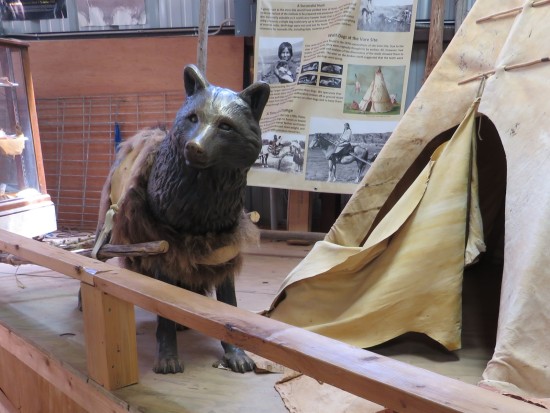 For younger visitors, decor around the dig site includes this good wolf-doggie statue.

We toured along with one other couple. The husband asked a hundred questions and our guide was more than happy to answer every single question at length. I’d normally admire that, but that doubled the amount of time we’d planned to spend here. The long uphill walk back up the spiraling path was also a lot more exercise than we’d bargained for, surely burning even more calories than our mile or so around Rapid City had done.

They didn’t quite grant my wish for a bone Sarlacc, but that’s okay. The experience helped me modulate my expectations for subsequent stops on this vacation. Not every site west of Rushmore needs to be mind-blowing. Historical tourism is not necessarily a parade of blockbuster imagery. Sometimes it’s a glimpse into the world of professionals doing the hard works, more for education than for entertainment. For more of the latter, sometimes the pretty Wyoming landscapes would have to do.