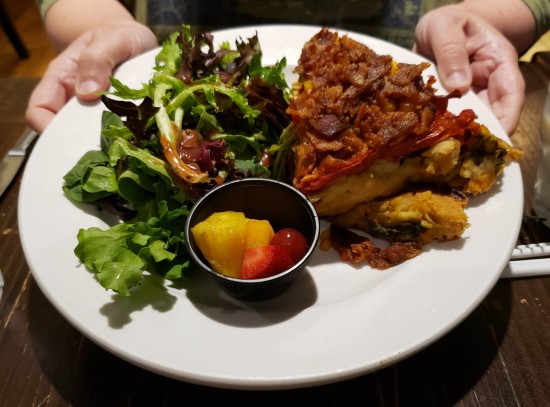 The most bacon-forward quiche we’ve ever ordered. The salad and fruit cup bring a lightening balance and make the whole meal seem more responsible.

Some folks patronize blogs for the words. Some are just here for the pictures. Words and pictures are often meant to interlink hand-in-hand, but authorial intent is not truly in charge of the reader’s experience. Consumers can exercise their freedom to ignore one half of the storytelling in favor of the other. Comics have sold for years using a similar dichotomy.

Sometimes my connections between words and pictures are tenuous, but they’re no less real or visible to me. In this very entry, for example, food aficionados can appreciate glimpses of one August morning at a lovely little eatery in Zionsville called Rosie’s Place, the last time we hit up a local establishment that wowed us enough to remember to take photos. Previous Zionsville visits have been a treat every time, no matter which of their establishments we’ve visited.

While that photo gallery is in progress around me, readers who don’t mind my characteristic verbosity can see me fumbling for the right words in a moment of grief and rage.

Rosie’s Place, a restaurant beloved enough to have a line at the door before they opened at 8 a.m.

Dragon Con notwithstanding, September has not been relaxing. Sources of stress have been adding up and seemingly multiplying, just in time to throw off the readings on my next physical in two weeks. Nearly all those amassed burdens actually weigh more heavily on others than on me, but I’m faring poorly at shouldering the partial tonnage that’s been shifted to me.

I’ve never been great at pretending everything’s fine when it isn’t. I’d rather say nothing than lie outright about my state of mind. I can sustain a silence better than a facade. And the worse things get, the quieter I get. In the worst of times I’m a furnace stoked by the wrong kind of fuel, straining to contain whatever fires burn within, but riddled with design flaws that malfunction at hotter temps. Inside me I can feel pressure needles soaring, surfaces cracking, steam hissing, gauges reddening and blinking.

Candor is my release valve.

I don’t need every pipe to burst and unload all my mental sewage. A trickle is a good start.

In this catastrophic eighteen-month era of last straws piled upon last straws, the most recent last straw was of course due to pandemic. Anne and I have stayed safe, gotten the vaccines, followed the rules and guidelines, tried to stay on top of the science as updates have floated down to us from above and myths have spewed through cracks in the gutters. So far we’ve made it to today epidemiologically unscathed, blessedly reconfirmed as I type this on our fourteenth day after hanging out at Dragon Con with 42,000+ other attendees.

Not everyone we know can say the same. At least nine relatives (that we know of) have contracted the coronavirus to date. One case amounted to little more than a head cold. One was the same except losing their sense of smell for a good while. Some hacked their lungs out for weeks, but are doing better and have since tested negative. One was in the hospital for two days, but has likewise recovered and plans to return to weekly Bible study group soon. The eldest among them, statistically the likeliest to die from it, was also the only one who was vaccinated. After a few days of on-and-off fever and some light coughing, she rocketed back to good health compared to the others.

The virus felled a distant relative months ago. We heard little. We knew them little. We never counted them as close enough for us to say, “Yes, we’ve known someone who died from COVID.”

Then a former coworker of mine passed away from COVID complications at the end of 2020. They’d been gone from the company for some time, but we’d worked together for years. As with most public-facing obituaries, the COVID aspect was never loudly broadcasted, but truth passed through the grapevine. That’s the moment I could begin answering honestly, “Yes, I’ve known someone who died from COVID.”

Now they aren’t the only one.

Fresh pasta in the window — not at Rosie’s, but at a quaint neighboring shop along our walk back to the car.

Now I know someone else who has died — someone I knew for over twenty years, a mentor and old friend.

I remember the good times. Chats about our families. Lessons learned. Faiths shared. Awkward holiday parties endured. Nitpicky arguments over legalistic minutiae. Mutual moments of laughter, frustration, and the emotional landscape in between. Borrowing and enjoying their copy of a bestselling YA novel before the film was released. An anecdote about a large appliance that made a difference in my life.

I also remember 2020. When casualties began to mount and pandemic precautions became not just a smart idea but mandatory rules, they were the very first person I knew in person who clearly wasn’t taking COVID seriously. As massive alarm and confusion gripped the world and every situation outside the home became a potential point of vulnerability, and masks became an everyday accessory Or Else, they were the first to approach me past the six-foot mark with mask at half-mast while speaking. This was not an isolated occurrence for them. I remember an occasional giggle or cavalier expression when the subject of the pandemic came up. I remember cringing inside as fear welled up behind my Halpert-ized expression in our short exchanges. I remember at least one time unsubtly backing up an extra foot or two, and seeing no indication that they’d noticed. When the vaccines arrived at long last, I predicted they would opt out.

As time went on, circumstances were rearranged and our paths no longer intersected in person. Beyond that point our interactions were limited to safe exchanges of occasional email, and never brought up the subject. Out of sight, out of harm’s way.

Because of that physical absence, I was totally unaware that they’d been hospitalized last month due to COVID complications until the day of their death less than a month later.

My brain was a cauldron of emotions exploding into each other. Shock at the sudden news. Sorrow at the end of a twenty-year friendship. Grief for the dearly departed. Sympathy for the family left behind. Disappointment that I’d been in the dark about the grave situation and the many calls to prayer that had preceded its finale.

I’m quick at math. Sometimes I can remember calculations I already ran in my head months ago.

This death had been absolutely preventable.

This death had been entirely, easily, immediately, freely, benevolently preventable.

I tried talking about it with hours, but words failed in a mixed setting. We would agree upon the awfulness of the event, then just look at each other, shake our heads, skip our next thoughts, and vocalize the kinder sentiments we’d rather be thinking instead.

I churned inside for hours until I could get back to Anne and let it out. And weep in gratitude that we’re both still here.

I’m sure Heaven’s cool, but I’m not taking the express bus there, so for now I’ll settle for this lovely Zionsville alley, typical for their entire downtown.

When the late Warren Zevon was diagnosed with cancer back in 2002, he appeared on The Late Show with David Letterman for what they both knew would be his final appearance. In several minutes of friendly but frank chitchat the two friends veered from cheers to fears, from light gallows humor to Deep Thoughts and back again. Zevon was aware and candid about the fact that the cancer was a direct result of his life’s choices. As he put it to Letterman, “I think that I chose a certain path and lived like Jim Morrison, and then lived thirty more years. Who knows why. You make choices and then you have to live with the consequences. There’re always consequences.”

Letterman then asked him in all seriousness, “From your perspective now, do you know something about life and death that maybe I don’t know now?”

After a pause, Zevon threw a callback to an exchange from minutes earlier: “Not unless I know how much you’re supposed to enjoy every sandwich. Y’know?”

All things considered, it’s awesome Zevon at least had that opportunity to spend time with old friends before the end. Some people get a final interview. Some don’t.

The other day, a stranger on Twitter brought up that exchange in a wholly unrelated context, but it struck me squarely between the eyes in a week when I’m dwelling even more on mortality than is de rigueur for 2021. It turned my head away from that direction and back toward the frequently wondrous land of the living and the perks it has to offer despite its myriad downsides. It was a reminder of the beauty we can find in the quotidian, the joy in the little things around us, and the grace notes inside a single meal, whether fancied up or simplified.

That’s when I remembered the pleasant Saturday at Rosie’s Place with Anne. The memory didn’t suddenly imbue me with a divinely sunny attitude, but it provided some much-needed perspective that helped refine this entry’s rough draft in my head, which initially felt like 2000 words of furious, piercing guitar feedback. At the same time, it didn’t fully distract me from the turmoil that’s nagged at me, or from the troublesome divide between the things we think deserve our full attention and the things we choose to ignore at our peril.