Hanging out at Six Flags America with Yosemite Sam and avoiding the fashion police in my backwards cap, fanny pack, and souvenir T-shirt from our 2000 road trip to a sci-fi convention in St. Louis.

Every year since 1999 Anne and I have taken a road trip to a different part of the United States and seen attractions, wonders, and events we didn’t have back home in Indianapolis. From 1999 to 2003 we did so as best friends; from 2004 to the present, as husband and wife. My son tagged along from 2003 until 2013 when he ventured off to college.

Sure, a lot of couples prefer to spend their downtime at the nearest beach, book passage on a cruise, or max out their credit cards on a Paris dream trip. We have our own agenda. Finding creative ways to spend quality time together. Searching for tourism options that wouldn’t occur to our peers. Digging for gems in unusual places — sometimes geek-related, sometimes peculiar, sometimes normal yet above average. We’re the Goldens. This is who we are and what we do.

We’ve shared stories and photos from all our annual excursions here on MCC. The experiences that predated this site were recaptured in hindsight from the photos, memories, and previous online write-ups at our disposal. In a few cases our archival searches were disappointing, as we could’ve sworn we took more photos than what we found. Once I’d finished reposting every single vacation, I assumed that was that and moved on. Then a few months ago, Anne happened to be combing our library for something and stumbled across a pair of forgotten, small, old-fashioned photo albums that had been buried behind or beneath other albums and scrapbooks in some overshadowed nook. Within those mini-albums we rediscovered a secret stash of unused pics from our 2003 road trip to Washington, DC. Suddenly my completed online project had a gaping hole in it.

Mind you, they’re not the best photos ever. They were taken by amateurs on cheap cameras using 35mm film before we switched exclusively to digital photos in 2009. No one was filling our inboxes with requests to revisit our road trips. But in my mind, now that I can see these did exist after all, the omission of these unintentional outtakes leaves the original MCC miniseries incomplete. And the older we get, the more excited we get at the thought of restoring missing memories, grit and blurs and all.

Presented here, then, are bonus images from that time my best friend and I drove my son out to DC, learned a bit of American history, found a lot of places shut down for post-9/11 renovations, walked too many miles, and came to hate Subway sandwiches because it was the only cheap restaurant we could find near our hotel.

The very special MCC version of this tale ran seven chapters in all, as follows:

2003, PART ONE: My son was added to our supporting cast for the first time. The drive from Indianapolis to DC ran us past Sideling Hill, a part of the Allegheny Mountains that had an interstate carved through the middle of it and used to have an overlook rest stop. Then it was onward to a tiny hotel room in our nation’s capital.

An overlook view of the parking lot and mountain panorama into Maryland and beyond.

2003, PART TWO: First stop was of course the Washington Monument, followed by a guided tour of the Bureau of Printing and Engraving, where photos were forbidden and their short supply of fun did not meet demand. Our desperation lunch at the Holocaust Museum and Cafe remains an all-time Bottom 5 meal experience. 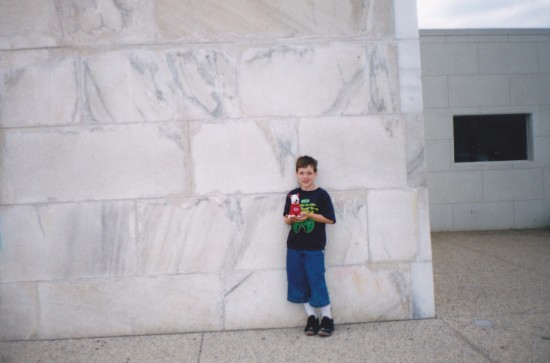 My son at the corner of the Washington Monument with his mascot for the trip, Bullseye the Target Dog.

2003, PART THREE: Excitement levels were on the upswing as we walked through two Smithsonian complexes: the National Air and Space Museum (later seen in distorted forms in such films as Transformers: Revenge of the Fallen and Wonder Woman 1984) and the National Museum of Natural History, which later featured in Night at the Museum: Battle of the Smithsonian. The latter was not the last time that dinosaur fossils would pop up in our travels. 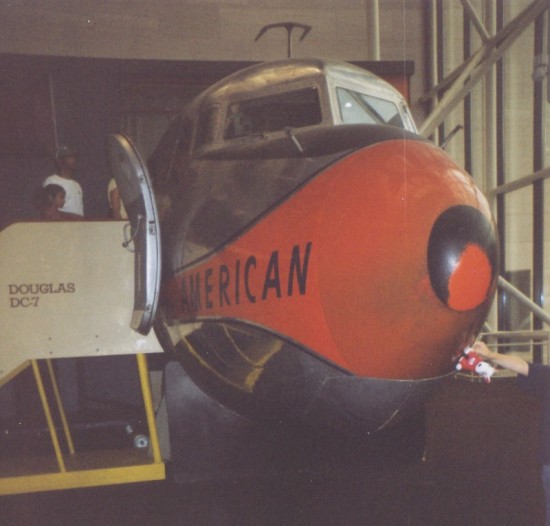 A Douglas DC-7 transport plane. Only a handful still exist, none of them in active service.

Cold War foes side by side; a Soviet SS-20 missile and an American Pershing II missile.

Bullseye and an old aircraft mural.

A fossil from one of your larger underwater dinosaurs, whose name was unreadable even before editing.

2003, PART 4: As a compromise for my son’s sake, whose interest in oddball roadside attractions never matched ours, on each vacation we made a point of stopping at either a zoo or an amusement park. Our inaugural concession was at Six Flags America, east of DC and within unsafe distance of Baltimore. I have no idea what it’s like today; upon our visit several rides were out of order and we witnessed at least one ugly confrontation between staff and an unruly, basketball-wielding guest ejected from an attraction. My very first bout with heat exhaustion sent me to the benches while Anne and my son did their best to salvage the day. 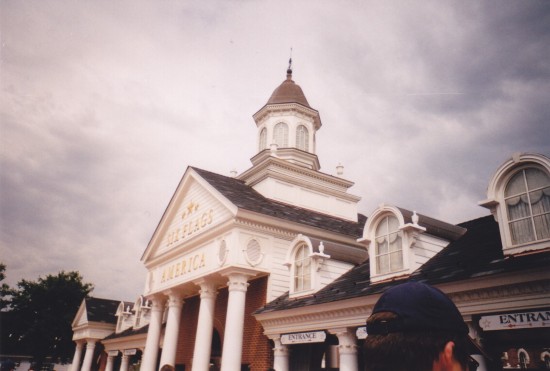 Welcome to Six Flags America! Be amused at your own risk! 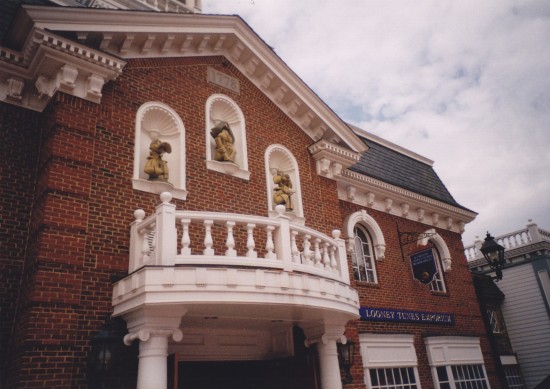 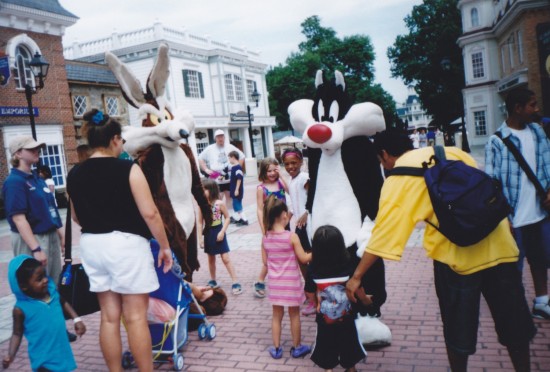 Sylvester and Wile E. Coyote were trained professionals handling the summertime heat in their furry suits far better than I did in my stupid cap. 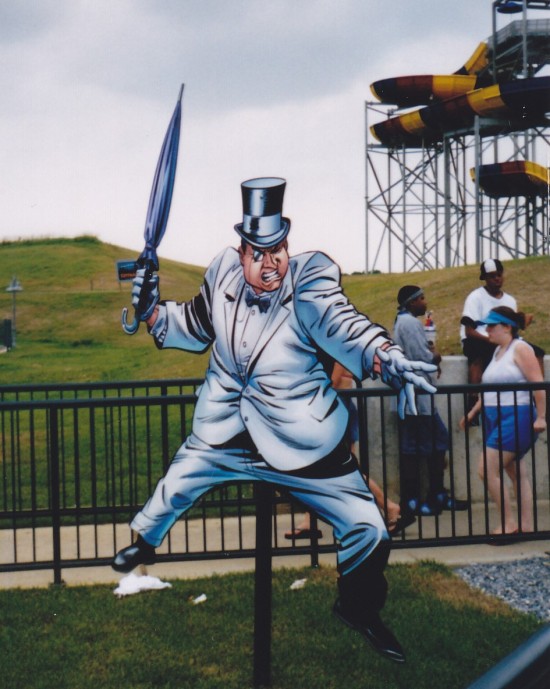 The Penguin menaces a Bat-ride.

Anne accompanied my son on their standard ordinary Viking ship ride. You can barely see Anne through the bars at lower left, waving at me. 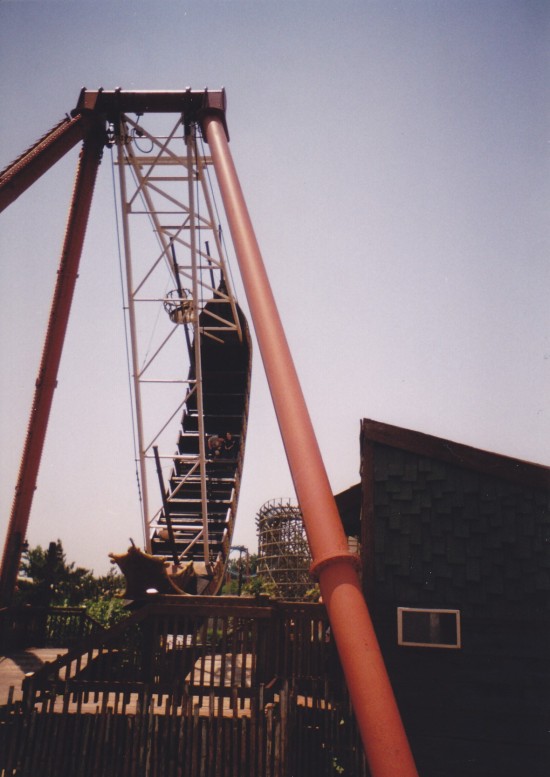 Same ride, but now Anne is burying her face in my son’s shoulder while waiting for terror and/or nausea to subside. These things never fazed him.

2003, PART 5: Our walking path took us from the White House (closed to visitors except certain qualifying organzations) to the Vietnam Memorial, with numerous statues standing around and in between them. This was the only day for which everything previously posted is pretty much all there is. The link is included for completeness.

2003, DAY 6: Our Family Circus-style overlong winding walk ran us from the Lincoln Memorial across the Potomac River to Arlington National Cemetery. One photo captures a sadly egregious oversight from our itinerary:

Our only photo of the U.S. Capitol, which we either couldn’t or simply didn’t visit due to construction. In the foreground, crews continue cleanup of the previous week’s July 4th festivities.

2003, PART 7: After one last series of exhibits at the Smithsonian’s American History Museum, we drove straight home on the last day, dazed and fatigued and sorry we couldn’t have seen everything. Closed locations as of summer 2003 included Ford’s Theater and the National Archives, among others. The National Museum of African American History and Culture didn’t exist at the time. There’s also the matter of swinging by Washington National Cathedral and adding Woodrow Wilson to our collection of Presidential burial sites. Someday we’ll return for a sequel, preferably after humankind has gotten a handle on that whole nasty pandemic and once DC has deescalated from its hyperpartisan war zone status. 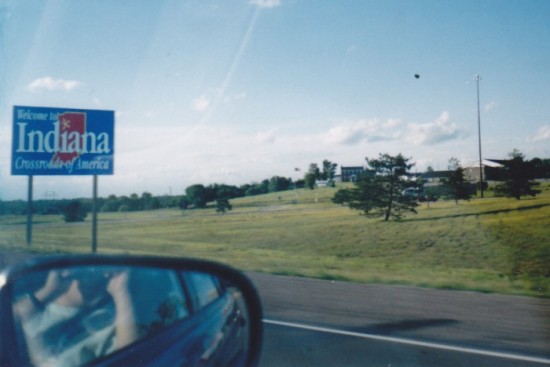 One of our usual, comforting “Welcome to Indiana” signs.

The severe thunderstorm that overtook westbound I-70 and followed us the rest of the way home. Not exactly the “happily ever after” note we would’ve liked.

…and in conclusion, even in more primitive times before we had mobile phones, our annual road trips were a land of contrasts.

[Link enclosed here to handy checklist for our complete road trip history to date. Follow us on Facebook or via email sign-up for new-entry alerts, or over on Twitter if you want to track my TV live-tweeting and other signs of life between entries. Thanks for reading!]