The makeshift memorial that rose up near the Grandstand box office in the days after the events of August 13, 2011.

Have you ever looked back on an occasion, really dug deeply into those tucked-away memories, only to have your rose-colored glasses slapped off when you’re suddenly reminded of a truly terrible part that you’d managed to forget?

The Indiana State Fair is an annual celebration of Hoosier pride, farming, food, and 4-H, with amusement park rides, cooking demos, concerts by musicians either nearly or formerly popular, and farm animals competing for cash prizes without their knowledge. My wife Anne and I attend each year as a date-day to seek new forms of creativity and imagination within a local context. As if our dwindling downtime to-do list for 2020 weren’t already small enough to fit on a Post-It, Anne and I are still reeling from Thursday afternoon’s announcement that the 2020 Indiana State Fair has been canceled after too many vendors kept backing out, painfully aware that crowds and super-powered viruses remain a volatile mix.

Recounts of our State Fair experiences have been among MCC’s annual traditions ever since I launched the site in April 2012. But it’s not as though our lives began in April 2012. We have quite a few stories not yet shared here from pre-MCC days. We may not be able to make new State Fair memories this year, but we can wallow in the older ones we haven’t revisited in a while.

Hence this previously unshared flashback to our 2011 experience…which was, to understate it horribly, not the fair’s best year.

On Saturday evening, August 13, 2011, an outdoor concert by the country group Sugarland was disastrously preempted when forceful winds from an oncoming thunderstorm blew down the stage rigging and the whole thing collapsed onto the crowd. Footage is still online from a variety of sources for historical purposes.

Four people died on the scene; three more died later from their injuries. The number of additional wounded was somewhere between twelve and seventy, depending on your rumor-monger of choice at the time.

The band was supposed to be on stage at that very moment. Their tour manager had held them back literally the one minute before, because of weather concerns. Rightly so, in hindsight. The debate over whether or not The Show Must Go On clearly took far too long to settle before fate made them rue their indecision.

Anne and I had planned for weeks beforehand to attend the fair on Thursday, August 18th. Thus we found ourselves on site five days later.

The fairgrounds had been closed all day Sunday for cleanup, investigation, and general common sense in the face of such incidents. All other events scheduled for the Grandstand for the rest of the week were canceled or relocated. The fair reopened Monday the 15th to, of course, much smaller crowds and much more somber ambiance. Many people couldn’t see the logic in visiting such a scene, one where happiness had turned into horror with just a cold-hearted snap of Mother Nature’s wretched fingers. Some suggested that the fair should just pull the plug and end early this year out of respect. Some remonstrated others against going via pithy Facebook proclamations because you all gonna die. The State Fair to them had become a Final Destination mousetrap waiting to strike twice.

We couldn’t blame people for feeling skittish. But we already had the day off from work. The vendors were willing to make a go of it. Other Hoosiers were willing to make the most of the day. Debate was hot and heavy over whether or not Those Who Died Would Want the Fair to Go On. Anne and I stuck to our plan. 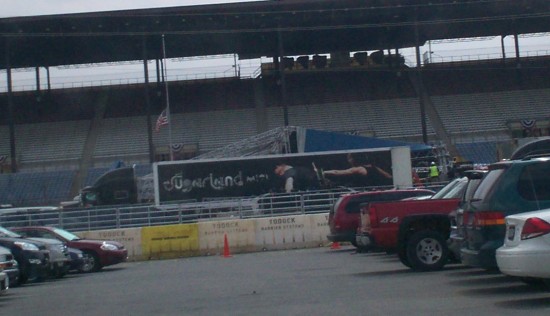 Our view of the Grandstand from the parking lot. Note the flag at half-mast. 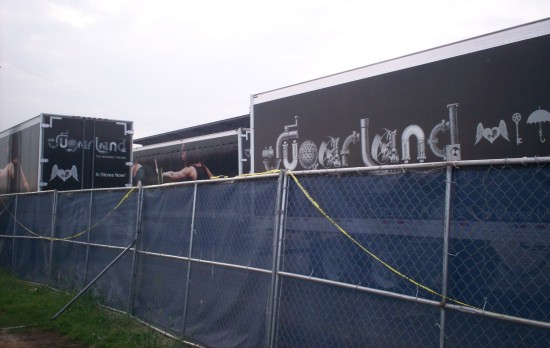 Several Sugarland trailers were still there days after the fact for the investigation. They also acted as a partition between the wreckage and the parking lot. 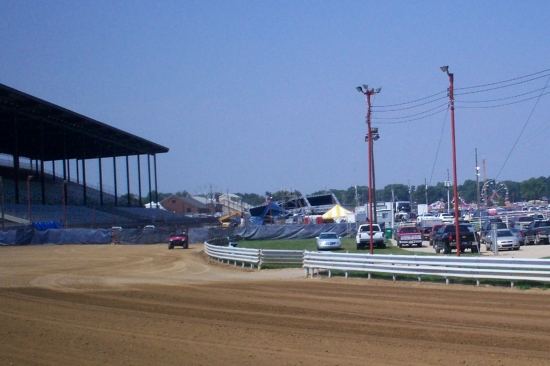 The view from the southeast corner of the horse track. 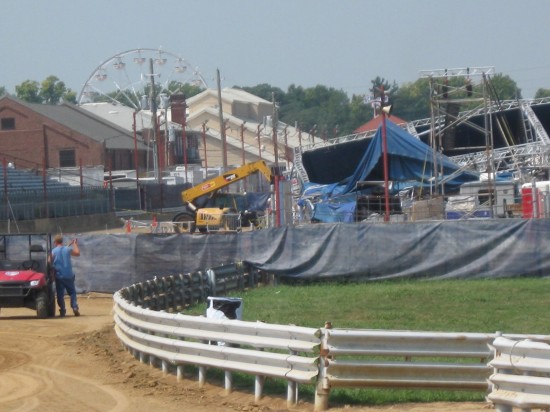 The best intrusive shot we could get. Fair volunteers didn’t care how close we got to the fence. Looky-loos were few when we arrived at 8 in the morning.

State Fair officials made the decision late Thursday to offer free admission anytime after 4 p.m. and all day Friday. The crowds improved drastically in size.

Later on Thursday evening, Train and Maroon 5 moved their performance to downtown Indianapolis at Conseco Fieldhouse (later renamed Bankers Life Fieldhouse), which was staffed entirely that night by unpaid volunteers. Both bands donated 100% of the proceeds to the victims’ families and related recovery efforts, to the tune of $350,000 or more.

Sugarland’s instruments and stage equipment were pretty much destroyed. They canceled a planned show at the Iowa State Fair, but that same Thursday their tour continued on schedule in Albuquerque, an affair that was understandably scaled back and stripped down, prefaced with a stirring tribute to their previous ill-fated gig. On October 28th they held their own benefit concert for the victims and their families.

The first among the dozens of lawsuits was filed on Wednesday the 17th — against the band, the fair, and the other corporate entities involved. By 2014 the total settlements numbered in the tens of millions. For some the scars have never faded.

All that effectively overshadowed what was supposed to be that year’s most solemn display. For the upcoming tenth anniversary of 9/11, Indianapolis would join the ranks of the numerous American cities erecting their own 9/11 memorials honoring hometown connections to the thousands who were killed. On display were the intended centerpieces, a pair of pillars that were formerly part of the World Trade Center itself. Attendees could see the real things for themselves before they were moved for the final installation downtown. 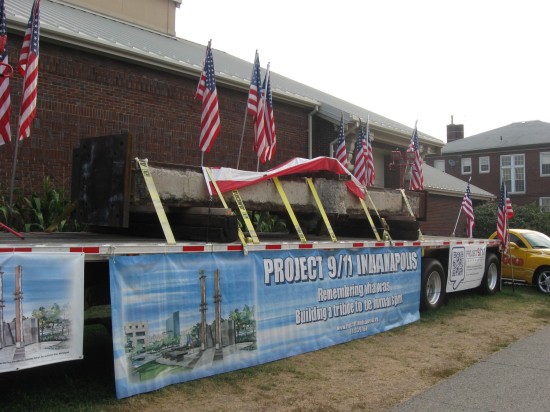 We saw the pillars in their new home five months later, but that’s part of a special-event photo gallery for another time.

While the Indiana State Fair has been a renowned focus of frolicking family fun, the 2011 edition had a serious side to it like none before nor since. It staggers the imagination to wonder what a 2020 version would’ve looked like if the show were going on.