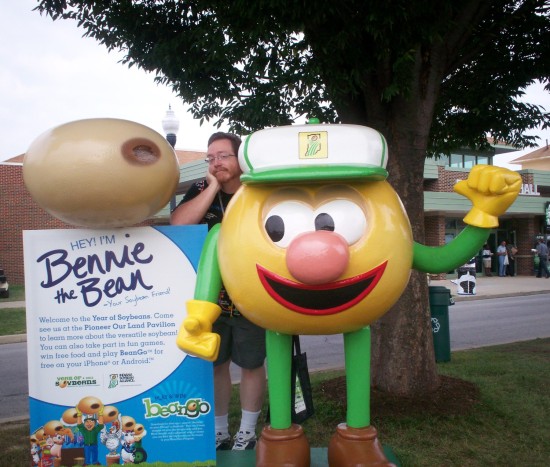 Me and Bennie the Bean. Soys will be soys.

The Indiana State Fair is an annual celebration of Hoosier pride, farming, food, and 4-H, with amusement park rides, cooking demos, concerts by musicians either nearly or formerly popular, and farm animals competing for cash prizes without their knowledge. My wife Anne and I attend each year as a date-day to seek new forms of creativity and imagination within a local context. As if our dwindling downtime to-do list for 2020 weren’t already small enough to fit on a Post-It, Anne and I are still reeling from Thursday afternoon’s announcement that the 2020 Indiana State Fair has been canceled after too many vendors kept backing out, painfully aware that crowds and super-powered viruses remain a volatile mix.

Recounts of our State Fair experiences have been among MCC’s annual traditions ever since I launched the site in April 2012. But it’s not as though our lives began in April 2012. We have quite a few stories not yet shared here from pre-MCC days. We may not be able to make new State Fair memories this year, but we can wallow in the older ones we haven’t revisited in a while.

Hence this previously unshared flashback to our 2011 experience. We tried to make the most of our day in this, the Year of Soybeans.

Time was, the farmer-centric State Fair would celebrate a different crop every year. 2010 was the Year of the Pig. 2009 was the Year of the Tomato. This year’s inspirational State Fair theme, for some reason likely political, was the Year of Soybeans. They have their uses — soy sauce, miso, teriyaki, school food — but seldom do you hear anyone besides Martin Prince chanting, “Soy! Soy! SOY!” while bouncing up and down like a kid at Christmas.

Vendors who wanted to participate in the annual “Signature Foods” theme therefore had to incorporate soy into their new culinary creations. This year’s dishes:

…and in conclusion, that’s why Part 1 of this miniseries was, to the best of my knowledge, 100% soy-free. Soybean statues were easier to find and somewhat more entertaining.

The official State Fair gift shop, decked out for the theme. 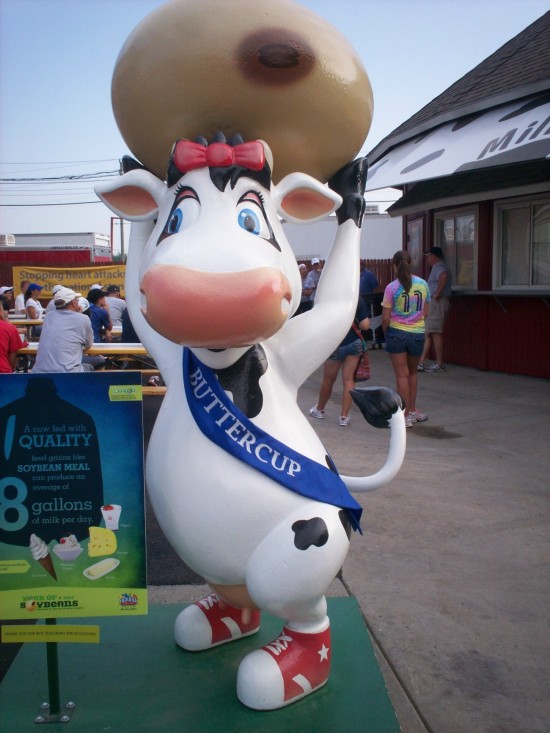 EAT MORE SOY! says the Dairy Barn’s mascot, stealing her shtick from her cousins at Chik-Fil-A. 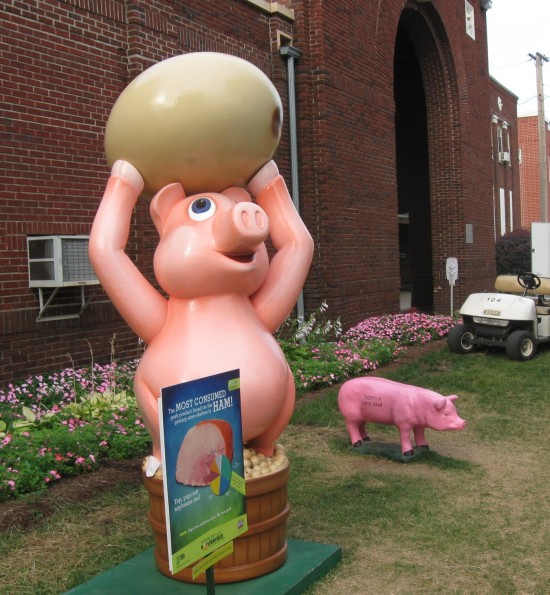 The fair also used to dedicate one exhibit hall to an international display celebrating a different country each year. For 2011 it was Germany’s turn, because why not. Prominent reminders of their culture’s imprint on world culture included pastries, lederhosen, and polka music.

A recreation of the erstwhile Berlin Wall.

Garman Flags, a bit subtler than some of the other mementos listed above.

We tend not to get overly excited about checking out the numerous animal barns and choking on their pervasive pungency, but a few lifeforms wandered in front of our cameras.

I know why the caged butterfly sings. He sings the blues because bars and mesh make for lousy animal photos.

…and so it went elsewhere at random.

A 20-foot-tall, 7-ton recreation of Renoir’s Dance in the Country by sculptor Seward Johnson. It moved on to other cities after the fair’s end. 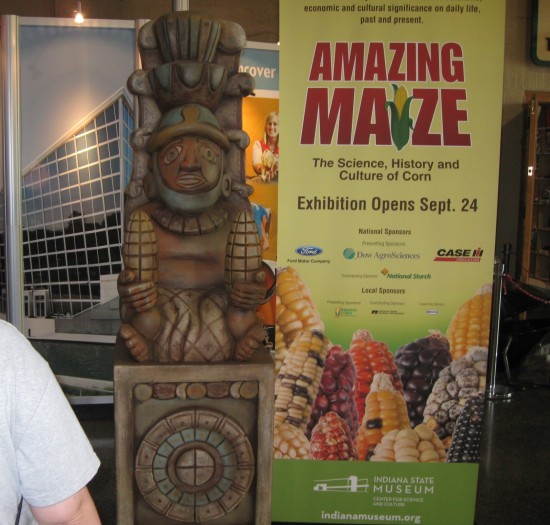 A corn maze god appears on behalf of an Indiana State Museum exhibit. Pay no attention to troublesome documentaries such as King Corn or Food, Inc. that malign his most holy reputation.

Anne with fake special guest Flo from Progressive, on hand to offer fair-goers tractor insurance or whatever.

…you get the idea. The End. Thanks for reading! Lord willing, we’ll be back with all-new State Fair photos next year.