Loukoumadis (fried dough), our final dessert at the Mediterranean Grill in Avon, Indiana. Taken in April 2017 on their final weekend in business. If only we’d shared more meals from there…

Midlife Crisis Crossover isn’t an official foodie blog, but restaurants are among the many and varied subjects we touch upon as we refuse to focus on a singular topic. Whether they’ve enlivened our annual road trips, featured in our wedding anniversary celebrations, given us something to do on Super Bowl Sunday instead of watching ads or sports, or simply welcomed us in for one-time tryouts, restaurants are a treasured aspect of our travel experiences, in other states as well as around our own hometown of Indianapolis. As you can imagine, my wife Anne and I are missing a lot of them right now rather intensely.

We’ve shared photos and warm feelings from dozens of eateries over the past eight years. Not all of them lived to see 2020, which in some cases may not be such a bad thing. Regardless, in this moment of wistful nostalgia, here’s a fond look back at some of the places that are no longer with us, who shut their doors after we visited them and didn’t even call us to say goodbye, because that’s not how it works.

Spageddies in Lafayette, IN: I realize we just shared this one five minutes ago, but it would be unfair to omit them. We tried this Italian eatery on Anne’s 2019 birthday weekend, which was also the occasion of Purdue University’s Homecoming festivities. At lunchtime the place was deserted. They closed without notice four months later, not long before the upheaval of everyday American life in the Age of Coronavirus.

Kaza Maza: From the ashes of the Mediterranean Grill (see our lead photo) rose this Moroccan/Mediterranean successor that could continue their legacy in the same strip-mall slot, albeit under different family management and with their own take. We cheerfully celebrated our fourteenth anniversary with them in July 2018. Alas, within a few months they were gone as well. By the end of that same year the space was assumed by an Indian restaurant we haven’t tried yet. Frankly, I’m afraid of jinxing them.

Lamb tagine slow-cooked in a clay pot with prunes, and an onion sauce, topped with sesame seeds and possibly almonds. Still the greatest prune dish of my entire life.

Stella: Massachusetts Avenue in downtown Indy is one of the most competitive restaurant districts within city limits. A few stalwarts have stuck around for years, but the neighborhood turnover is so high that it’s hard to get attached to any fresh new places. For Anne’s birthday in 2017 we dressed up for an evening of Southern European cuisine in a wood-fired oven left over from the previous tenants. Four months later (I’m trying not to sense a pattern) the owner chose to redirect the company’s energies to other projects, but it was hard to tell if the competitive environment was to blame or if they simply got bored and wanted to try something else. 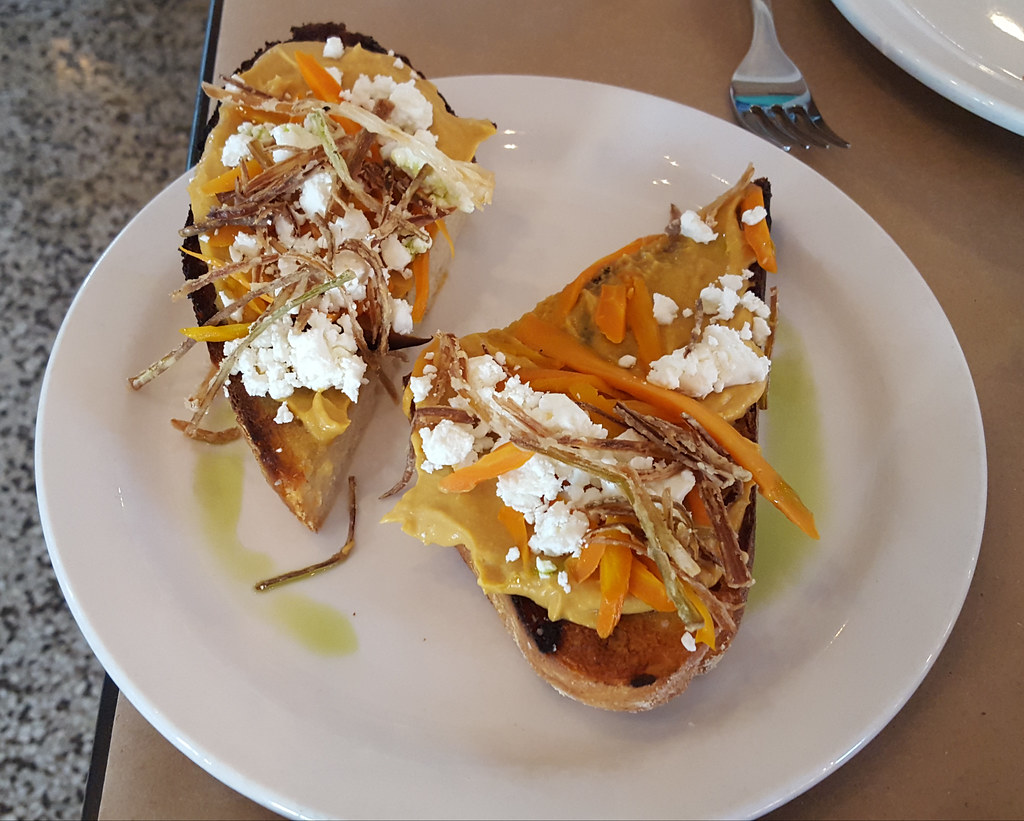 Rigas’ Family Restaurant: Not everyplace we go needs to be trendy or upscale. We can’t afford that all time and we’re not social media influencers (gag) accustomed to a haughtily hollow lifestyle. If we ever act as though we are, please call us out and you’ll have my tearful repentance. Anyway, this mom-‘n’-pop diner was a fixture for 53 years in Bellaire, Ohio, where we had lunch one late afternoon on our 2017 road trip after visiting two consecutive toy museums in two different states that were each occupying former schoolhouses. Six weeks later, Mrs. Rigas instantly retired and thankfully didn’t blame us.

Two Boots Pizza: When we stayed in a Hell’s Kitchen hotel for our 2016 return to New York City, nearby mealtime options included one of several locations for this pop-culture-happy pizza chain that gave creative names to its offerings. In December 2018 they were not the first Two Boots shuttered for tax-related issues.

To be honest, the moderately gentrified storefront was a more remarkable sight than the food itself.

The B Spot: We’re suckers for ventures owned by Food Network veterans as long as they’re not priced into the five-star stratosphere. We’d seen Michael Symon compete on Chopped and other shows, and had to give him a try on my 2016 birthday when his people planted a flag on Indy’s north side with bold burgers and bizarre shakes. Two years later they surrendered and sneaked away, disappointed with the returns.

McCarthy’s on the Riverwalk: Hours before we hit The B Spot, we’d discovered this one on the banks of the Elkhart River while walking around downtown Elkhart. We ate lunch there the following March after our tour of the inaugural Hall of Heroes Comic Con, but by that point weren’t in the mood to take photos. (Anne was merely tired; I’d smashed my kneecap that morning and couldn’t bend my leg. Pain distracts me from leisurely pursuits.) Another year later they ended a nearly decade-long run for top-secret paywalled reasons.

Lola’s Bistro: We live in one of the parts of Indianapolis that rarely has the privilege to welcome a new, independently owned restaurant. This means our DoorDash and Grubhub options are mostly uninspired corporate franchises, and it means we get unreasonably excited when someone deigns to locate anywhere near us. We made a beeline for this Filipino hideaway — whose owner’s wares also include a couple of top-notch ice cream shoppes — as soon as we could after their grand opening. We enjoyed the one meal, then rent our garments two months later when said owner announced on their website that they were sacking the whole concept because the executive chef for whom they opened it and designed it around in the first place quit on them. The Mexican joint that replaced them closed last year. Once again an otherwise perfectly fine location for the right enterprise is irrevocably cursed.

Their banh mi was fine, but the star of our lunch was dessert, the Turon — deep-fried plantains wrapped in rice paper, plus ice cream and toppings.

Barcelona Tapas: Since our family doesn’t watch sports, we have an annual tradition of celebrating every Super Bowl Sunday with an evening of fine dining, preferably far away from TVs. For the occasion of Super Bowl 50 (yes, I had to look it up) we ventured out to the only tapas place we’ve ever tried. We loved the concept and the dishes themselves, though prices precluded us from going too wild. They lasted another year-‘n’-a-half before ending their run on Labor Day weekend when lease negotiations broke down.

The Chicago Skyway McDonald’s: Sometimes it’s not the food we miss. Once upon a time there used to be a McDonald’s in the middle of the I-90 toll road that we drive a few times every year from home to our beloved Chicago comic-cons and back again. By the time we leave the Windy City at the end of the day, we’re usually dead on our feet and dying for any food that’s better than the tripe they serve at convention centers. After our first few Chicago con trips, the Skyway McDonald’s became our easiest fallback position for post-con suppers because we didn’t even have to exit the interstate — just pull off to the side, and BAM. There it was. Several trips later it became our little tradition. The food wasn’t great. The ambiance was usually somewhere between unsettling and threatening. But it was our tradition…until 2015, when the McDonald’s Home Office ordered it wiped off the map due to low sales. Now it’s just an extra-wide breakdown lane.

I trust you know what a Double Quarter Pounder with Cheese looks like, but I still love the one and only photo we ever took there, of the tollbooths a few hundred feet away.

Tater & Joe’s: For Anne’s birthday in 2015 we spent the day in Terre Haute, toured a museum owned by a Holocaust survivor (who sadly passed away last year), and at milady’s request fetched lunch from a hole-in-the-wall that specialized in creative baked potatoes. Their menu was impressively varied for a diner their size, but their downtown seemed rather sleepy despite multiple nearby colleges. I guess everyone else thought their spuds were duds because they were uprooted a year later.

Cropichon et Bidibule: Tish! That’s French! Or was French, anyway. My 2015 birthday took us to another Massachusetts Avenue proprietor with haute cuisine and high hopes, one of only two French restaurants we’ve ever tried, neither of which exists anymore. In the case of Croppy’s-and-Buddy’s here, local scuttlebutt had it their authentic name was among the turnoffs that helped nail their coffin the following winter. ‘Twas a better fate than what the other, long-gone French bistro suffered — over there, they paved paradise and put up a trailer park.

So far, all the other well-regarded places we’ve posted about since 2012 remain in business. Or at least haven’t dissolved. For now, anyway.

Though a few restaurateurs here in town have made the hard decision to close permanently over the past month, our continued prayers and appetites are with those establishments far and wide. May they survive to the other side of this awful, hopefully short-lived period so we can return to those much-missed feelings of community, experimentation, and cooking far more expert than our own.