Upon our return home, I did my best to post our photos of the experience as quickly as possible, twelve chapters’ worth plus prologue and epilogue. Seven of those galleries were devoted to their gargantuan cosplay parade through the streets of Atlanta…

The proud annual tradition of the Saturday morning Dragon Con parade is definitely not a thing we can see back home at any of our usual cons. Multiple groups and organizations walk, ride, roll, and gallivant together in a united display of pop culture through downtown Atlanta. Hundreds of participants boast costumes and gear from across the wide spectrum of entertainment. The festivities draw thousands of onlookers every time — not just D*C attendees, but Atlanta citizens as well…the spectacle is nonetheless a staggering feat of community and imagination. Of the nearly 1800 photos Anne and I took over the course of our eight-day trip, roughly 400 of those were from the parade alone…

…and that’s essentially it for the Dragon Con parade at long last, well after the cosplayers involved have probably already recuperated, forgotten about photos, and moved on to planning for their next major events.

And here we are today, not moving on but rather moving backward. Because I can! Feel free to try and stop me retroactively somehow.

The following surplus gallery marks where the 14-chapter Dragon Con saga fits into the larger narrative that is Our 2019 Road Trip. It also serves as one last hurrah of outtakes, excerpts, and baffling oversights. Some of these I wasn’t happy with the first time around and wish we’d done the cosplayers better justice. On some of them I’ve second-guessed whether or not I was too picky. A few were simply, inexcusably overlooked and underappreciated during the hours I spent curating, editing, uploading, labeling, sharing, and being driven to exhaustion by laboring over so many photos in such a short time frame…which I’ve gone ahead and done yet again for what I presume is the last time, but for real now. I think. Enjoy!

Among the previous omissions were numerous photos of assorted famous cars of pop culture. Exhibit A: a S.H.I.E.L.D. cruiser.

The ECTO-1 is a familiar convention sight, usually brought by fan groups for charity fundraising initiatives. 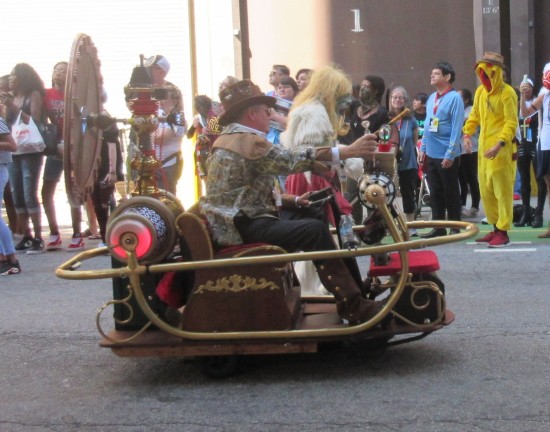 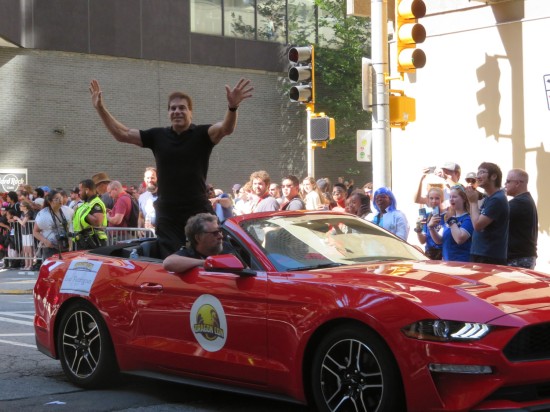 Alternate shot of one of the sweet celebrity-carrying sports cars. In the back seat a cheery Lou Ferrigno shouts, “NO FREE PHOTOS! EVERYONE OWES ME $80!” 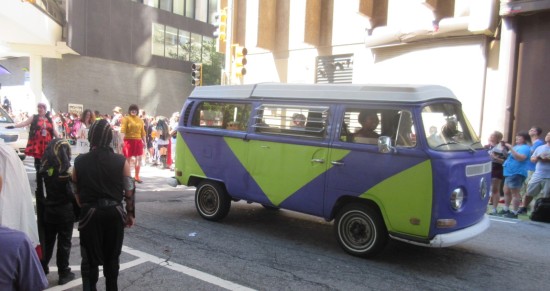 The Scooby Gang’s Mystery Machine. Its presence here means someone in Atlanta is faking ghosthood for profit. 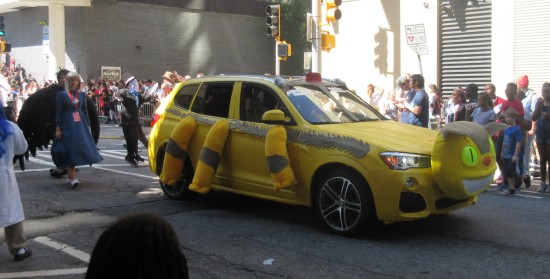 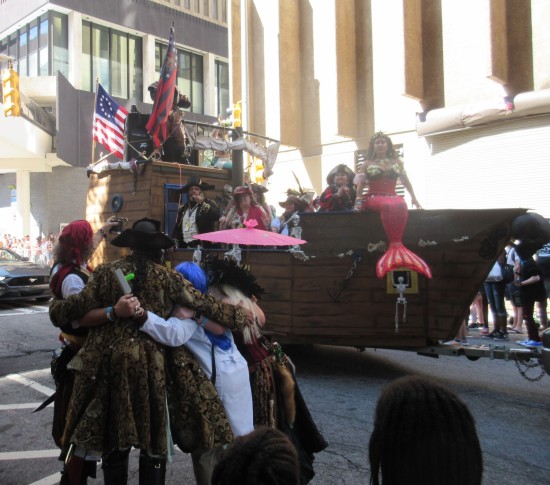 Pirates disembark from their ship for group photos. 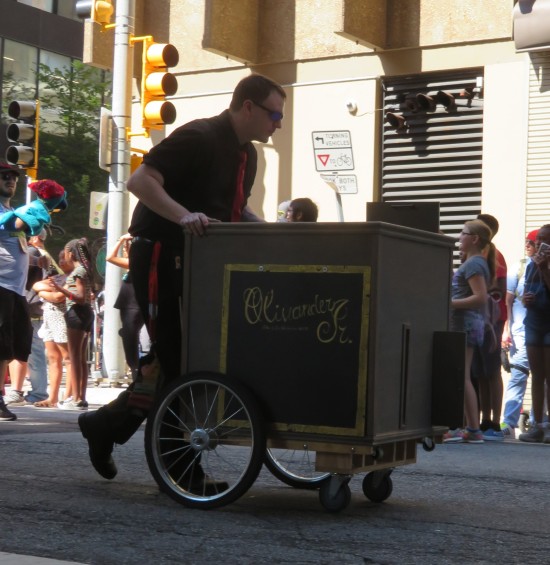 Olivander Jr. taking it to the streets with his wand cart. Why buy from an ice cream man when you can buy a wand and create your own treats from thin air? 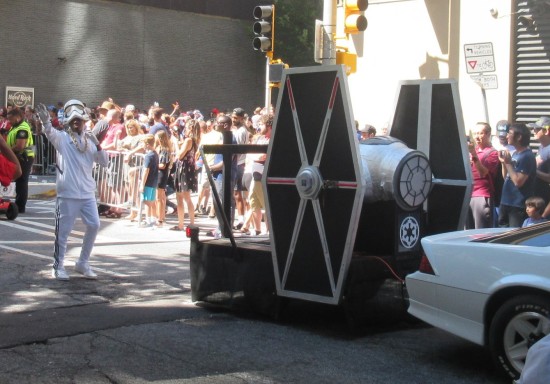 TIE Fighter pulled along on a trailer, which is how most of them end up after a dogfight with the Millennium Falcon. 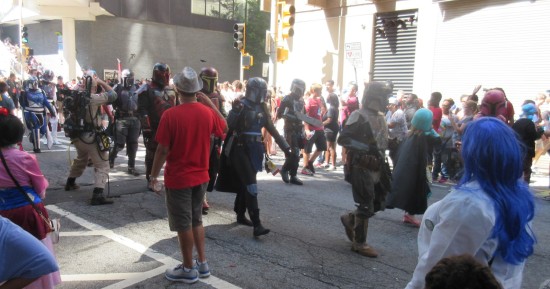 (Minor note of peevishness: in addition to cashing in on this week’s Mandalore Mania, that photo is also my clearest shot of the two individuals who, during the parade’s final twenty minutes, each decided to jump out in front of the more orderly fans who’d been in position and politely toeing the line for hours, and started adding to their Instagram stories at the expense of anyone standing behind them. Pieces of their anatomy appear in several of our photos as unwanted Easter eggs if you look closely. Triple extra credit points to any readers game enough to look back at the original chapters and spot the one photo where you can see the one lady standing on the other side of the street before she crossed over and began hogging ours. I was tempted to devote an entire entry to the matter, but decided to vent my pettiness in this paragraph instead and then, one hopes, let it go.) 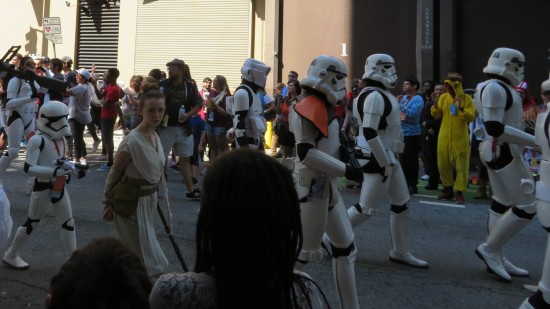 Rey and the best turnout of Stormtroopers we’ve seen from the 501st Legion outside of a Star Wars Celebration. 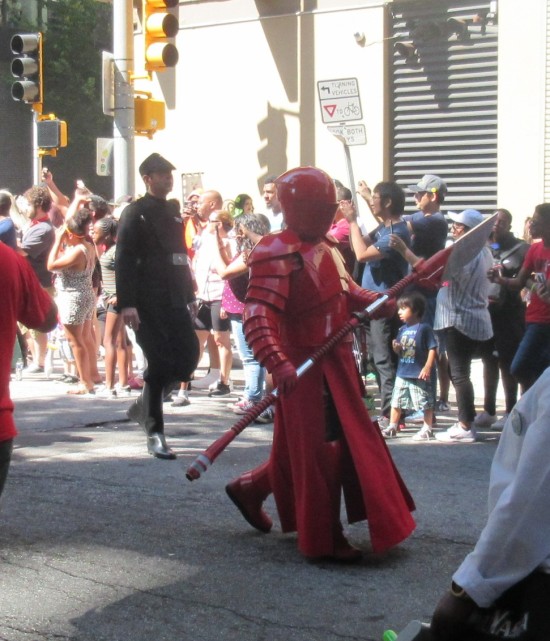 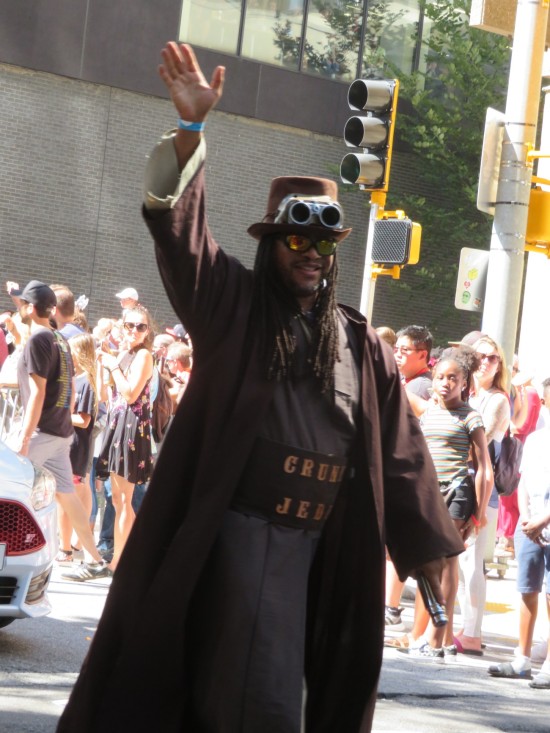 Crunk Jedi! Looking for inroads into that New Canon. 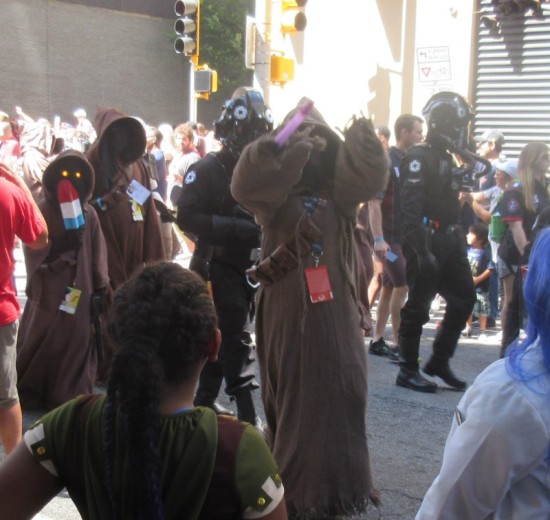 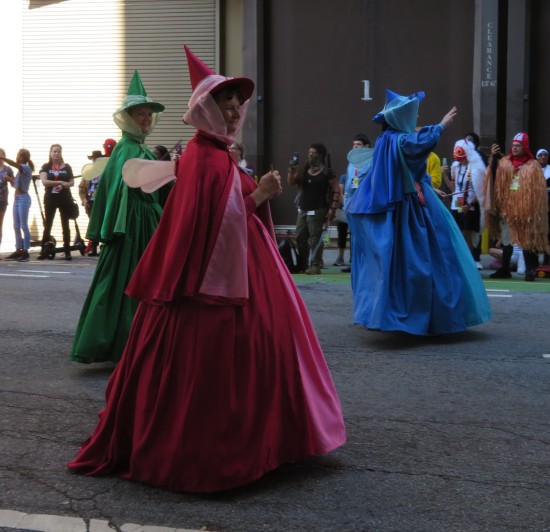 Fauna,Flora, and Merryweather, the fairy godmothers from Disney’s Cinderella. 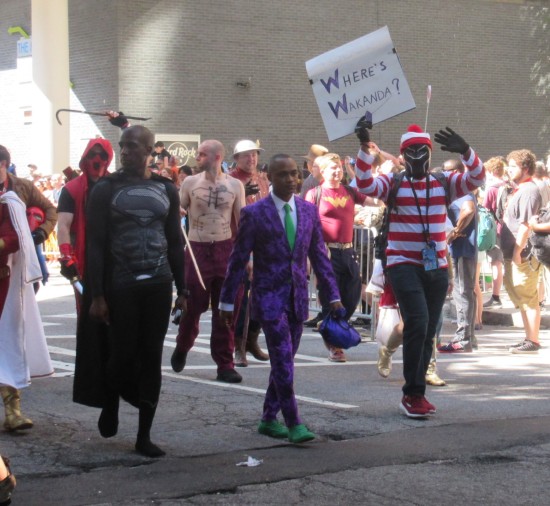 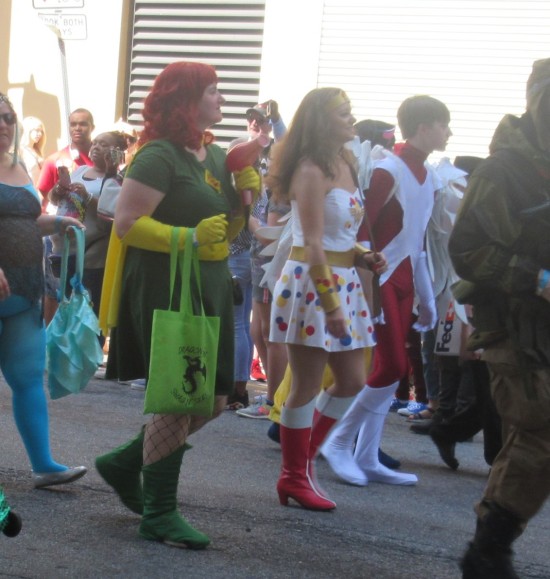 The Vision, polka-dotted Wonder Woman, and X-Men charter member the Angel in his old X-Factor costume. 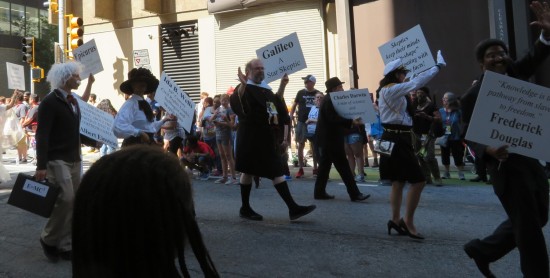 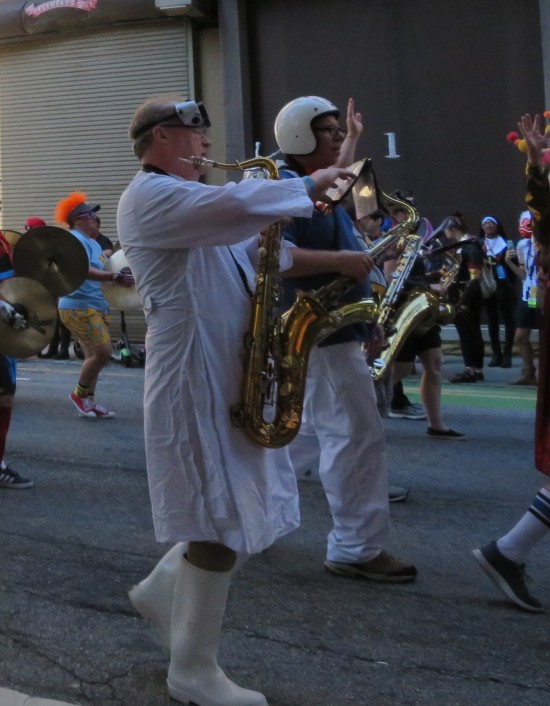 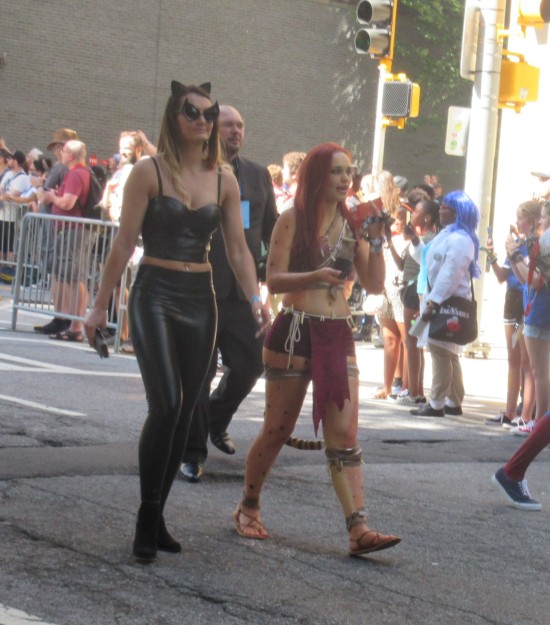 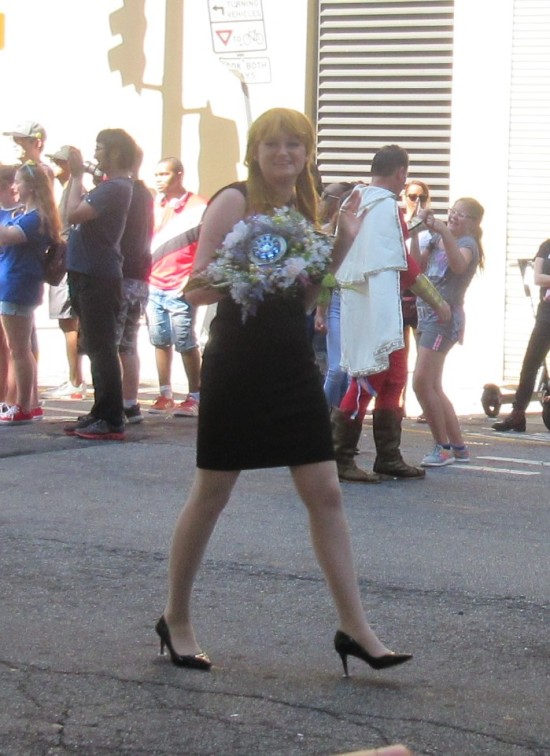 Pepper Potts with an Arc Reactor in her bouquet. 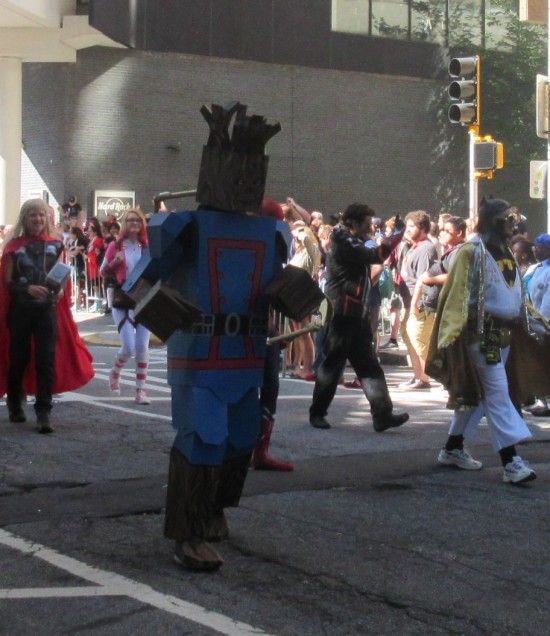 Groot, dressed from that time someone in comics thought it made total sense for space renegades to wear matching military uniforms. 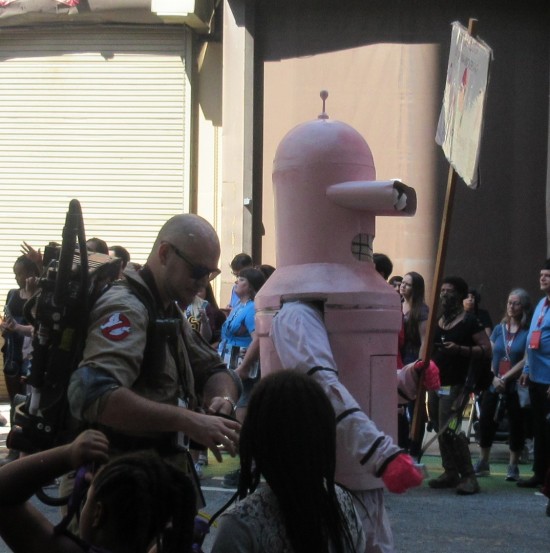 Pink Bender from an alt-timeline Futurama. 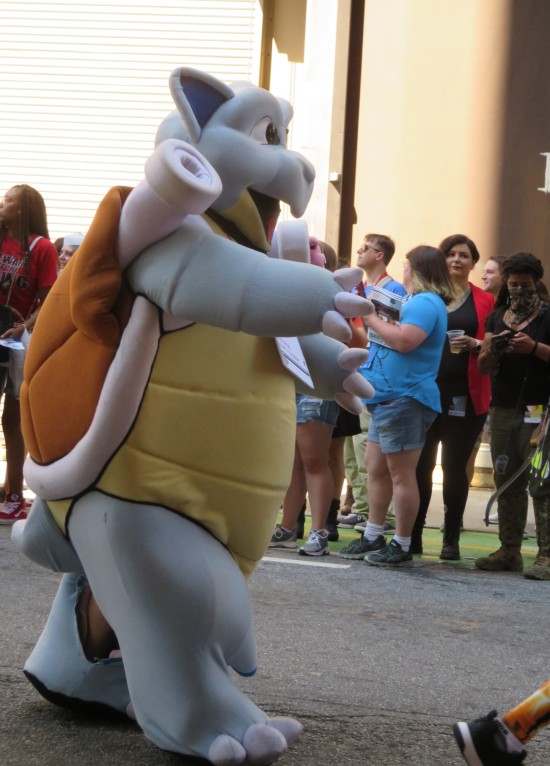 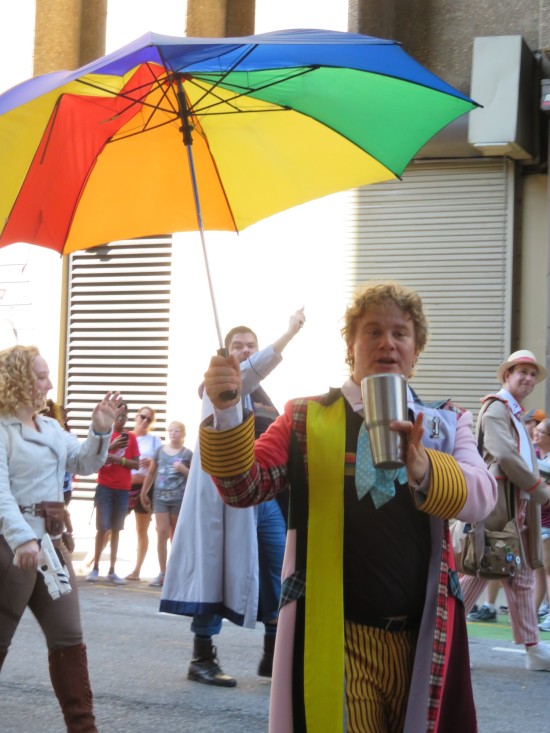 The Sixth Doctor, bringing his own shade to buffer Atlanta’s overbearing summertime sun.

…and here endeth our Dragon Con 2019 parade coverage. Most likely.