We’re in Atlanta and it’s a civil rights museum. The list of obvious candidates for the lead photo position was pretty narrow.

A couple hundred feet north of The World of Coca-Cola was the National Center for Civil and Human Rights. The museum opened in June 2014, the realization of an idea 13 years in the making, built on land donated by the Coca-Cola Company. The permanent exhibits divide into three categories that flow from one to the other as you progress through its halls — the story of Atlanta’s own Martin Luther King Jr. segues into the history of American civil rights, which in turn broadens in scope on the top floor into an exploration of international human rights as they’re interpreted and/or denied today.

The mission statement from their website: “Our purpose is to create a safe space for visitors to explore the fundamental rights of all human beings so that they leave inspired and empowered to join the ongoing dialogue about human rights in their communities.” It’s no mere, perfunctory school field trip destination for Black History Month.

As with quite a few museums, many of its exhibits are synthesis of words and pictures, fascinating in their own right but maybe not great for sharing in internet photo galleries like this one. Its walls tell the stories of Gandhi, Mandela, Yelena Bonner, Vaclav Havel, Estela de Carlotto, and others who lived lives of perseverance toward freedom. We found a wealth of material that seemed unfair to hoard all to ourselves. 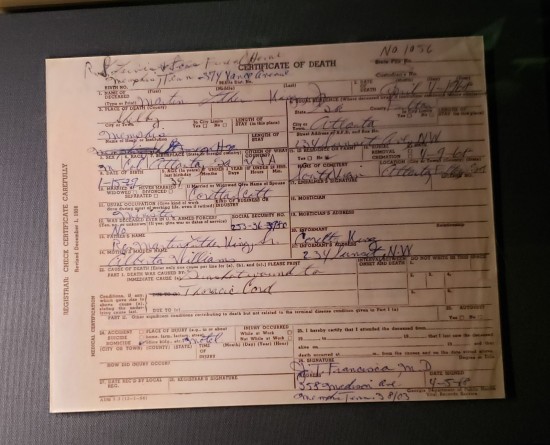 Artifacts from Dr. King’s life include a copy of his death certificate. 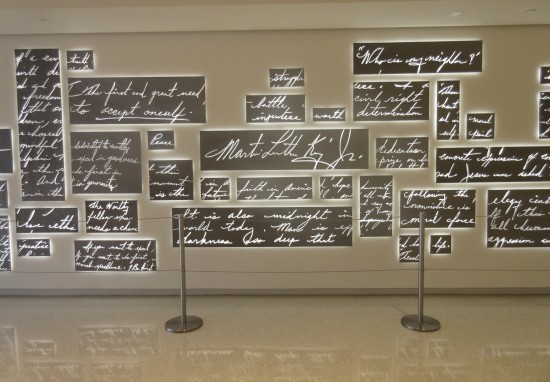 Though King is dead, his words live on, immortal for as long as we continue to treasure and learn from them.

(Fun foreshadowing: this wasn’t our last dive into MLK history on this vacation.)

Among the most eye-catching symbols: a bus covered with the mugshots of arrested civil rights protesters and marchers. 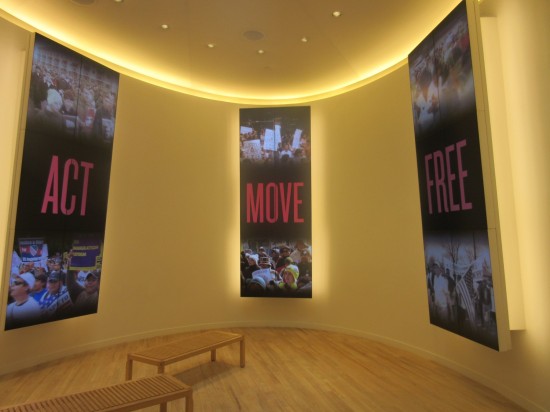 Multimedia installations roll news clips and interviews from the era. 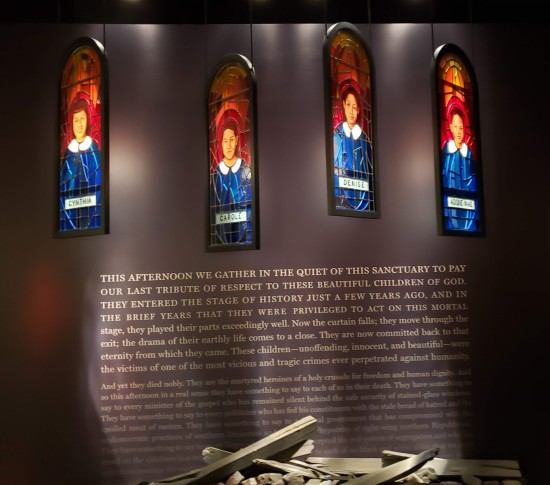 Tribute to the four young girls murdered in the terrorist bombing of Birmingham’s 16th Street Baptist Church in 1963. (We visited the scene in 2015.)

The 1960s even turned Amercana’s own Norman Rockwell serious and relevant, as in his 1963 work The Problem We All Live With. (This is a replica; the original is currently in his official museum in Massachusetts.) 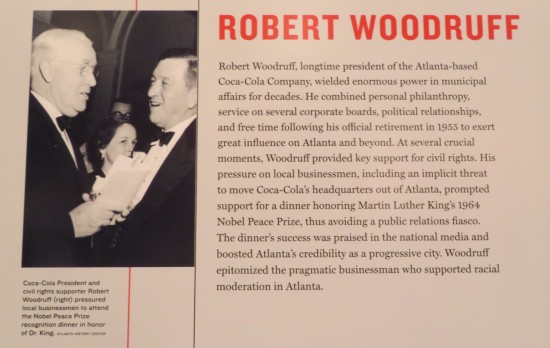 Shout-out to Coca-Cola president Robert Woodruff for that time he wielded his considerable power to take a stand on MLK’s behalf.

Not all leaders were eager to sit tight and wish really hard for white guys to legislate on their behalf unbidden.

A handy scorecard to segregationists of the era, guys who were cool with “NO BLACKS” signs, separate educational facilities, and violent racist oppression. 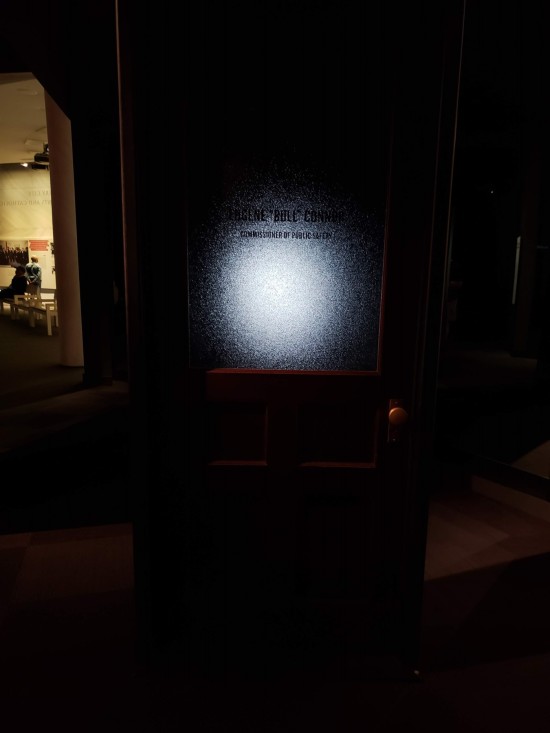 Among the cornerstones of negotiating human rights worldwide is the U.N.’s Universal Declaration of Human Rights adopted December 10, 1948, which listed thirty in all. Here, committee chair Eleanor Roosevelt holds up the Spanish-language version.

Larger displays break down some of the more commonly invoked rights individually. (This is just a few of said displays, not the sum total.) 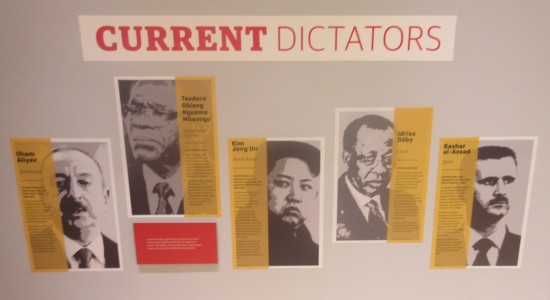 “Current Dictators”: a handy if not necessarily comprehensive field guide to present-day non-benign regimes at the time of our visit. 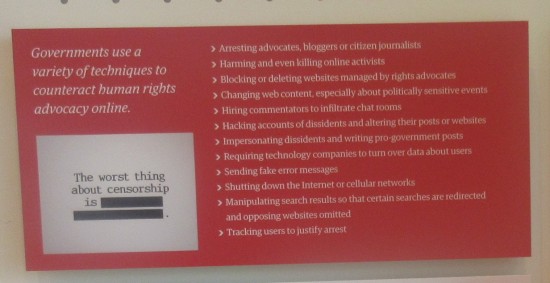 Immediately concerning to anyone reading this entry on a technological device: summary of methods used by regimes to shape, bend, twist, manipulate, dominate, eliminate, and otherwise dictate online life according to their immoral whims. 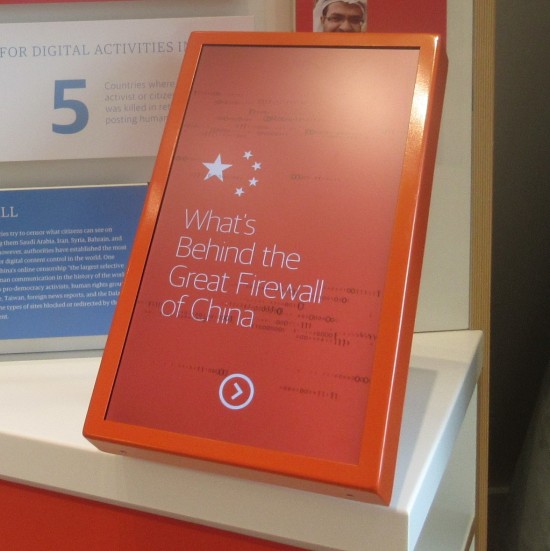 A selection of tables show off imported products made in other countries using oppressive worker conditions and/or outright slave labor, such as this chocolate that was of course not sold by your favorite chocolate company but by some other similar dudes but eviller. You hope. 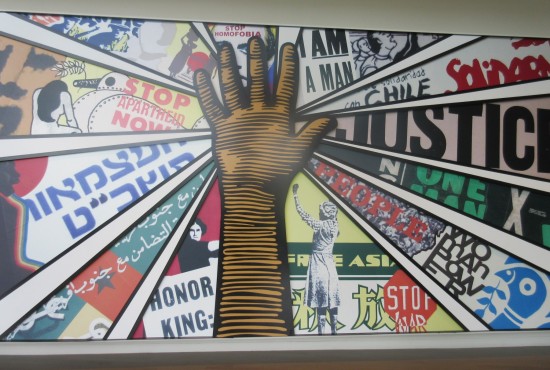 The mural in the lobby, tying the whole place together.

At the end of our tour I came away with a copy of Spike Lee’s documentary 4 Little Girls from their gift shop. A half-block later, heavy rains showed up and tried to drown us as we walked the entire length of Centennial Olympic Park back to the Atlanta Streetcar stop. In the final analysis, it was a blessing and a privilege that getting soaked was the worst thing to happen to us that day.