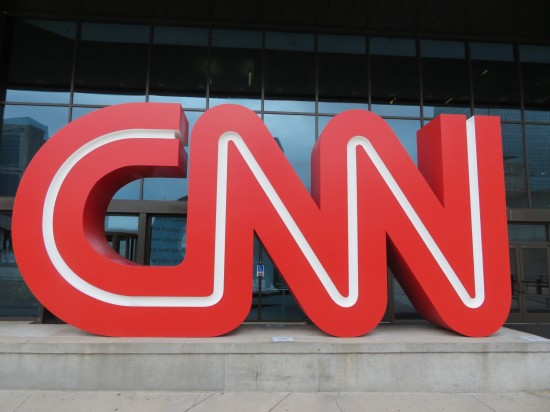 The artist formerly known as Cable News Network. You can pronounce it “Conan” for short, but people will look at you funny.

Atlanta is home to a few major companies with international reach and historical impact. Among them, CNN was closest to our hotel. The 1980 brainchild of local media mogul Ted Turner, best known to our generation as the guy who brought us Turner Classic Movies and who thought it would be cool to have It’s a Wonderful Life garishly colorized, CNN was the first 24-hour all-news channel, back in the days before every hobby, profession, concept, or word had its own dedicated 24/7 cable channel out there.

The building has been around since 1976, but it’s been the CNN Center since 1987, when CNN and its eldest offspring CNN Headline News relocated and made it their broadcasting home. CNN’s primary programming now shoots in NYC, LA, and DC, but HLN and other CNN offshoots still call ATL home. As it happens, the CNN Center offers tours to the public. We thought it sounded fun. Neither of us watches CNN regularly, though Anne dabbles in HLN’s true-crime programming. Sadly, our tour did not include a meet-and-greet with the narrator of Forensic Files.

Our view of CNN Center from next door at Centennial Olympic Park. That’s the adjoined Omni Atlanta at right.

The CNN historical marker offers more context and tried to save me a few sentences’ worth of typing. 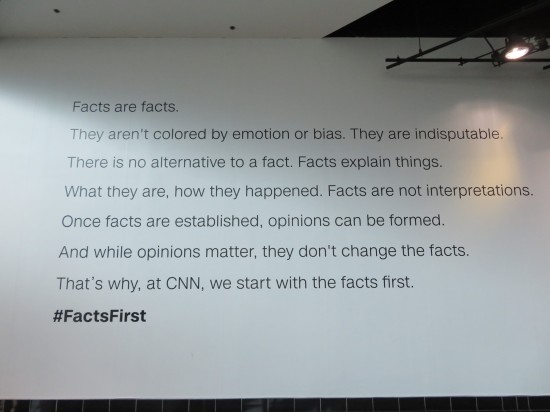 After passing the first security guard at the front door, the lobby greets visitors at far left with a primer on How Facts Work. Because some people need practical advice.

Pan to the right of Facts 101, and there’s the current slogan.

Farther right of that is the entrance to the center courtyard, reminding you the Ted Turner legacy remains a thing even though the erstwhile Turner Broadcasting empire is now part of AT&T’s WarnerMedia (formerly Time Warner (which had its roots in Warner Communication (a spin-off from Kinney National Company (a merger containing Kinney Parking Company, a New Jersey joint originally co-owned by a mob guy)))).

In the center of the Center is a food court, a view of the many office levels rising above, and an Earth. Back when the CNN Center was known as the Omni Complex, its features includes an indoor amusement park (just like the Mall of America) called the World of Sid and Marty Krofft. The park’s largest remnant is a 196-foot-long escalator, certified by Guinness as the longest freestanding escalator in the world, which carries group tours upward into the center of the Earth.

Apparently it’s a load-bearing escalator and could not be removed.

We approached the main desk and bought tickets for the next available tour. After the usual “where are you guys from?” exchange, one of the two clerks on duty told us he happened to be from Indianapolis, though not our neighborhood. Curiously, the same thing happened when we toured 30 Rockefeller Plaza in 2011 and met a page who said he had coworkers from Fishers and Zionsville. That’s…an interesting coincidence if true. Call it the Great Hoosier Diaspora, I suppose.

We had a good twenty minutes to kill until our tour time. While Anne headed straight for the nearest smashed-penny machine, I wandered their gift shop, loaded with official CNN merchandise as well as select items from other companies that share their corporate umbrella. 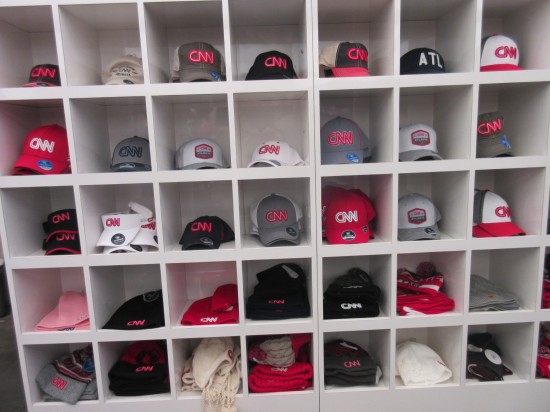 Way more CNN hats than any human will ever need. 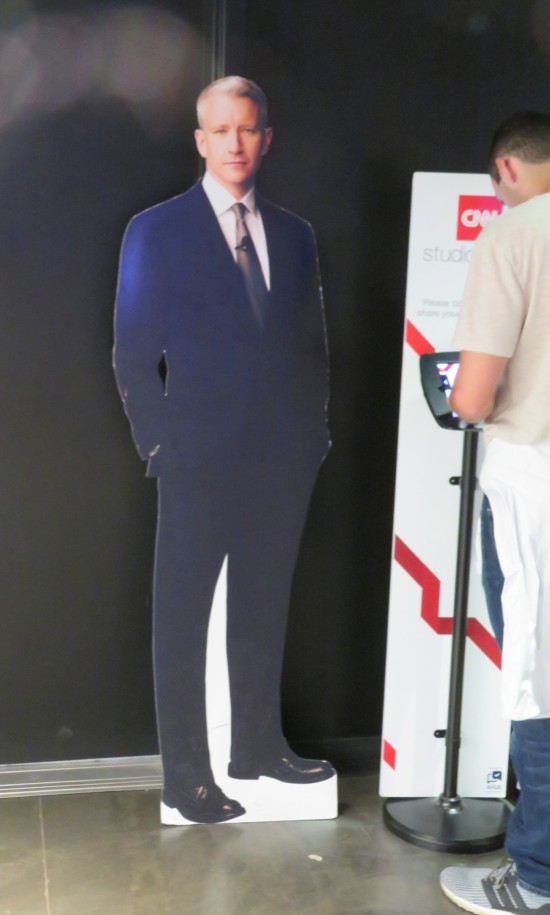 The nearest celeb was this Anderson Cooper standee. A fun reminder of that time eight years ago when we were about sixty feet from him while he tried taking tourist photos from a moving convertible in downtown Indy. 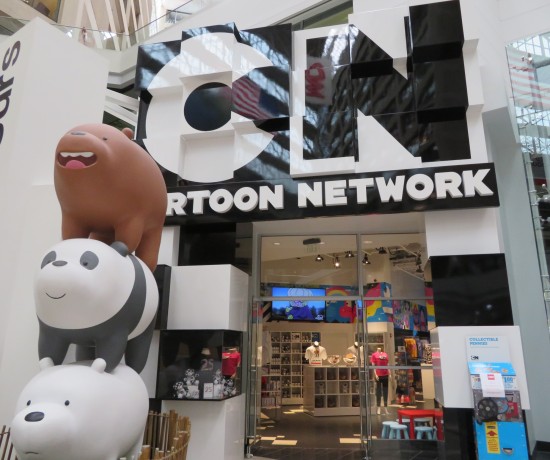 A Rick and Morty corner section for the discerning Adult Swim devotee. 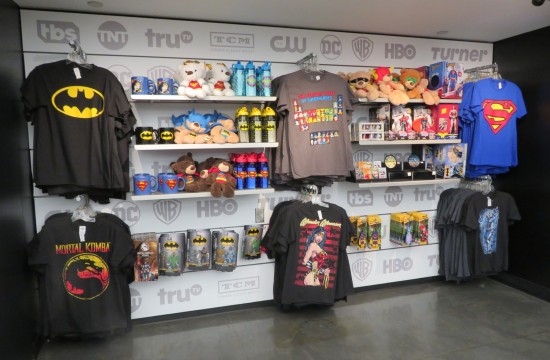 The heroes of DC Comics get a smattering of representation. Actual DC comics do not.

One of 47 dolphin statues erected around Atlanta in 2011 as a promotion for the Georgia Aquarium.

When the time came for our tour, we reported to the appointed gathering spot, marched through metal detectors, and were accompanied by security guards up the escalator and all throughout every single stop and step on the tour. On the occasion of our August 26th tour, things were not copacetic in America between our journalists and our politicians in power, to say nothing of the latter’s occasionally unscrupulous fanboys. CNN was taking no chances.

Journey into the center of the Earth, with the day’s headline news at fixed points zipping past on our left.

In the official welcoming room, a director’s control panel demonstrates the number of screens and camera angles that can be viewed at once. At left, the President of France tries not to roll his eyes at America while speaking at the G7 Conference. 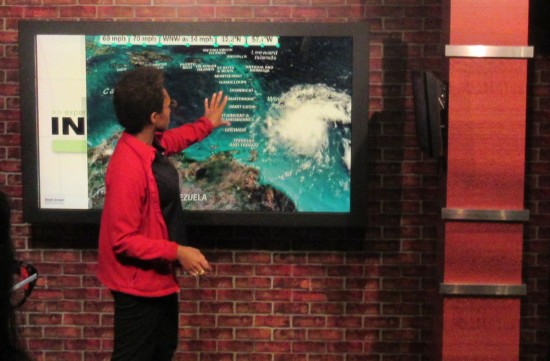 …and that’s the last point at which we were allowed to take photos on the tour. However, no such decree was proclaimed about taking notes while we walked. Other things we saw on our heavily guarded tour:

For the final act, we gathered in a freezing mini-auditorium to watch a self-promotional video about the importance and awesomeness of CNN, the critical function that its mission plays in American life, and the accomplishments of its anchors including but not limited to Anderson Cooper. We were prepared to be patient and polite as clips began to roll from past major breaking news stories. Then came the background music — a very familiar piano tinkling, joined by a subtle drumbeat, then an increasingly louder, somber orchestra behind them…at which point Anne and I looked at each other because we had both just recognized Hans Zimmer’s theme from Man of Steel.

We spent the rest of the video stifling our laughter while Cooper and other correspondents shared true, deadly serious, sometimes life-changing tales and reports over bombastic strains that once accompanied a superhero flick in which Superman murdered a bad guy.

On that note, the tour ended and the guards escorted us back to the main lobby. Before heading out to our next Atlanta destination, we grabbed lunch from their food court at a fast-food place we’d never heard of called BurgerFi. I’d assumed at the time that they were small and/or exclusively Southern, but a quick check of Google Maps confirms they have a location two hours northeast of us, up in Fort Wayne. Who knew.

For some reason our order took a good ten minutes or more to make. A few customers behind us in line got their meals before we did. That never impresses us in a restaurant, and effectively killed any interest we had in paying attention to whether or not the food was any good. Once we got ours, we shoveled it down while more guards looked down upon the crowds from an overhead catwalk.

My BurgerFi-branded sandwich was called the “CEO” — a Wagyu/brisket double burger topped with Swiss cheese, truffle aioli, and candied tomato bacon jam. Anne had a plain burger, what we like to call a “Ron Swanson”.

Of course there’s a big TV in the lobby. While we ate and rested, CNN senior political pundit Nia-Malika Henderson expounded on the day’s mishaps and/or ramifications.