I didn’t hear the news till earlier today of the September 21st passing of actor Aron Eisenberg. We didn’t realize he wasn’t that much older than us. Age 50 is far, far, far, far too young. Really, all ages are far too young, but you know what I mean. I’m not sure my thoughts run more deeply than “This really, really sucks,” but we do have a few mementos for our remembrances.

Eisenberg on stage at Starbase Indy 2014.

Anne and I of course knew him best from his recurring role on Star Trek: Deep Space Nine. As the Ferengi rapscallion Nog, whose dad Rom (Max Grodenchik) worked at the station’s bar for his uncle Quark (Armin Shimerman), Eisenberg spent his first few seasons playing the neighborhood delinquent who frequently got his best pal Jake Sisko (Cirroc Lofton) into trouble. Nog’s race prized money and greed above all, and lived out their codes of conduct accordingly, which made for tense times between the two friends and Jake’s dad, station runner Captain Benjamin Sisko (Avery Brooks).

As the cast aged and the show became more complex, so did Nog. His sense of morality grew closer toward the side of good and selflessness as he learned from the positive role models around him, eventually leading to his joining Starfleet, serving aboard a Federation vessel, and later losing a leg in wartime. Deep Space Nine was fantastic when it came to letting characters and actors evolve throughout the course of the series.

Eisenberg performing as Nog in a sketch with Max Grodenchik at Starbase Indy 2014.

Anne and I met him at two different conventions. We posted about the most recent one back in November 2014. Our photos weren’t great, but the times spent watching them on stage — both in and out of costume — were a treat. We never saw Eisenberg in anything less than high spirits, as he was always “on” for the fans, even when one dedicated volunteer attempted to deny him entrance to the con’s refreshments room. Maybe he should’ve brought the mask.

The first time we met Aron Eisenberg, back in November 2001 when 35mm cameras and their flashes were still a thing.

Eisenberg and Grodenchik previously visited Indianapolis in 2001 for an “Indy Trek Con” held by Slanted Fedora Entertainment (about which the less said, the better). As they would once again in 2014, the TV alien-father/alien-son duo took to the stage to regale Trekkers with a bit of after-hours showmanship called “Ferengi Family Hour”. Other guests involved in the performance included Chase Masterson, whose DS9 character Leeta the Dabo Girl would become Rom’s wife and Nog’s stepmother; and Lolita Fatjo, a staffer on three Trek series and Production Associate on First Contact. I wrote about the occasion at the time (lightly edited from the original, because I can):

The most hilarious part of “Ferengi Family Hour” was a few-minute stretch of unplanned wild improv.

During one segment, the Ferengi family re-enacts “The Wizard of Oz”. When they arrive at the Emerald City, Chase, Aron, and Lolita Fajto (who plays the part of Rom’s mother Moogie, since Cecily Adams recently gave birth and therefore couldn’t attend) are all in character, while Max subs for the role of the Emerald City’s entry guard. Max is on the right side of the stage; everyone else is on the left. Only problem is, Max is supposed to be on everyone’s left. Apparently, he had to run over to the right side because the mike he was supposed to use over on the left side wasn’t working, so as the scene begins, he’s on the wrong side.

They knock at the door, and Max answers from the right side of the stage, breaking the fourth wall to tell the characters and the audience everything I’ve just written above, but while staying in character. Without pausing for breath, he continues to explain how wrong the scene is going and casually switches to the left side of the stage while he’s talking. Once he gets in place, the other three then proceed to knock again, and the scene begins to go on as planned, to much laughter.

After Max opens the door, he continues speaking and begins to walk to center stage. As he walks, he nearly trips over a tangle of microphone cords. He pauses in mid-sentence to blurt jokingly, “WATCH THAT WIRE!” then continues with his lines as written.

Correction: Max TRIES to continue. Upon hearing Max’s aside, Aron immediately bends right over at the waist and begins literally watching Max’s microphone wire, staring intently where it runs from his hand, down his leg, past his crotch, and to the floor along with a mess of other wires. While Max tries to keep saying his lines, Aron stays bent over, and keeps watching. And watching. And watching.

It’s a really goofy thing to do, yet the audience and the other actors are dying.

Max, barely containing himself, finally stops, looks at Aron, looks where Aron’s looking, looks at the audience, and says, “I don’t want to know what he’s watching.” 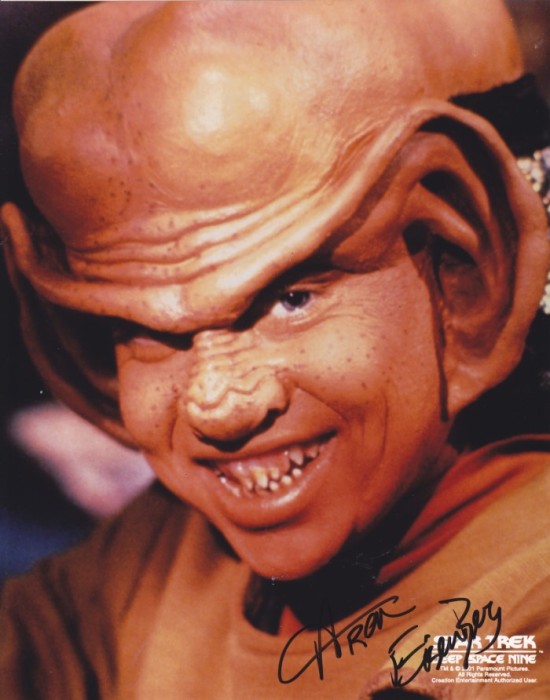 A souvenir from Anne’s files, a moment from happier times.

In their panel, among other subjects, Eisenberg complained about the only action figure ever made of his character. “Action figure” was a bit of a misnomer. Rom got a full-fledged figure; his accessories included a tiny Nog with zero points of articulation. He could’ve been a Ferengi rag doll. Eisenberg was exasperated to look back on this only toy ever made of him, which he described as “a choking hazard”.

He also called us “the best low-altitude audience we’ve ever had” — as opposed, we guess, to Denver fans who giggle more freely at higher mountain altitudes.

When we approached him in his 2001 autograph line, he asked me who to make it out to. Still easily starstruck by con guests back then, I stammered in all humility, “Uhhhhh, ‘To Randy’, if I could.” His instant response was of course to sign, “To Randy if I could, Aron Eisenberg”.

Such were our experiences with him, the committed performer and the cheery comedian no crappy toy or amateur photos could truly contain.