It’s that time of year again! Today marked the eighteenth Free Comic Book Day, that annual celebration when comic shops nationwide offer no-strings-attached goodies as a form of community outreach in honor of that time-honored medium where words and pictures dance in unison on the printed page, whether in the form of super-heroes, monsters, cartoon all-stars, licensed merchandise, or entertaining ordinary folk. It’s one of the best holidays ever for hobbyists like me who’ve been comics readers since the days when drugstores sold them for thirty-five cents each and comic book movies were sad, cheapskate abominations.

Each year, America’s remaining comic book shops (and a handful in the UK that can afford the extra shipping charges) lure fans and curious onlookers inside their brick-and-mortar hideaways with a great big batch of free new comics from all the major publishers and a bevy of smaller competitors deserving shelf space and consideration. It’s easy to remember when to pin it on the calendar because it’s always the first Saturday of every May and often coincidental with a major movie release. Granted, Avengers: Endgame already opened, but that’s not too far off the mark. In theory, folks should be craving new superhero adventures now more than ever, even if it means trampling guys like me trying to point out there’s a lot more to comics than just superheroes.

My wife Anne and I used to have a tradition of venturing to one of Indianapolis’ several comic shops an hour or two before they open, hanging out in line with other fans, availing ourselves of any freebies offered while we’re waiting, marching inside when the employees have braced themselves for the onslaught ahead, grabbing some of the free offerings, and spending money on a few extra items as our way of thanking them for their service in the field of literacy.

It’s worth remembering Free Comic Book Day is not free for shop owners. The publishers and distributor still charge money for all these comics, which shops then turn around and pass out to anyone who asks for $0.00 apiece. Participation is not cheap. Whether they do it for love of comics, or because they don’t want to look like miserly super-villains, most comic shops join in the fun anyway. No one expects newcomers to the medium to be aware of that, to feel guilty, or to chip in like it’s a charity.

For longtime readers? It depends on our conscience. 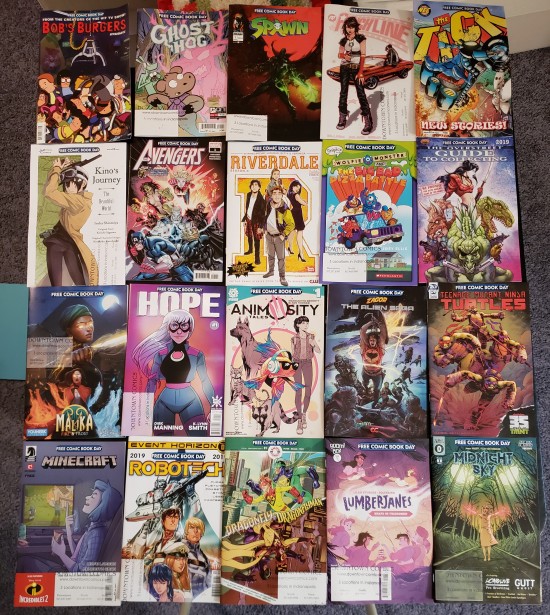 This year’s haul II: even haulier.

As with last year, my Free Comic Book Day involvement took on a different form. My local comic-shop chain once again offered a special deal that sounds crazy to anyone who worships at the altar of freebies: for a fair sum of money, we could pre-purchase a bundle of all 53 Free Comic Book Day comics that their stores planned to order. Normally these would all be free, but you’d look like a schmuck for casually walking in, picking up all 53, and walking right back out. I’m reminded of a moral that Anne and I frequently invoke for many situations: just because you can do it doesn’t mean you should.

For the one flat fee up front, they set aside copies of all those comics, bagged ’em up, and let buyers pick them up late Saturday afternoon, once all the furor and hubbub had subsided. Best of all, part of that sum will be donated to Peyton Manning Children’s Hospital. Some of the money, as well as some of the comics, will be For The Children. So I went for it again. I liked the idea of playing the role of patron, donating extra cash to a good charity and helping facilitate Free Comic Book Day for other folks in town, in a way that would help my shop offset the costs. If you really like comics, then sometimes you do things to ensure there will be more comics. And the economic realities of the comics business have not been kind to shops over the past 20+ years. It’s kind of a miracle that Indianapolis still has this many active shops, far more than a lot of large or even larger cities can say. I rather like the idea of them staying in business for as long as I remain attached to their wares.

Now that I’ve done my part, next is the harder part: reading all of these. The next step in my weekend will be to plow through these as quickly as possible, in 100% random order, collating thoughts and images as quickly as I can for sharing with You, The Viewers at Home. Once I finish this entry, in between chores and family obligations (including a baptism on Sunday afternoon, which is exciting), I’ll be live-tweeting thoughts and images as I go, maybe tossing in an occasional bonus Instagram here and there. Who knows where my time and attention span will take me. Last year’s live-tweeting sparked a few conversations with creators responsible for some of the better books. I didn’t hear back from those involved with the comics that were, um, clearly not for me, but that’s understandable. At least I know the roads in either direction will be paved with worlds of wonder and pallets of pure imagination.

Bride of this year’s haul: the trilogy achieves closure.