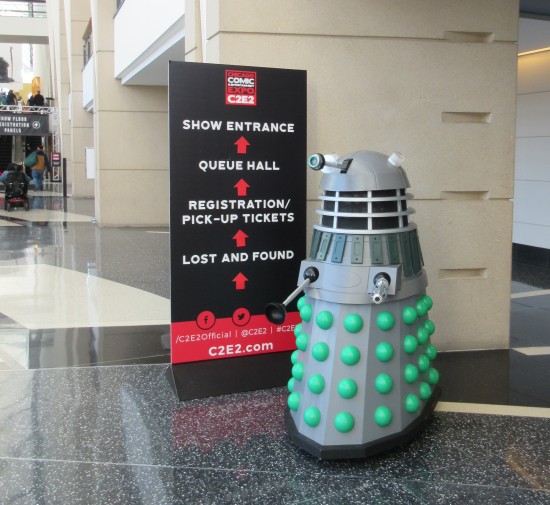 It’s that time again! My wife Anne and I just got home from the tenth annual Chicago Comic and Entertainment Exposition (“C2E2″), another three-day extravaganza of comic books, actors, creators, toys, props, publishers, freebies, Funko Pops, anime we don’t recognize, and walking and walking and walking and walking. Each year C2E2 keeps inching ever closer to its goal of becoming the Midwest’s answer to the legendary San Diego Comic Con and other famous conventions in larger, more popular states. We missed the first year, but have attended every year since 2011 as a team…

…and taken photos as a team, of whatever sights catch our eyes around the vast exhibit hall, which could contain several football games at once, though it does not because football is out of scope for geek mega-parties like C2E2.

In the spirit of the Moral of the Story from our seventh exciting chapter, in which we ultimately learned that photos are cool and words are dumb if you put too many together in a row, please enjoy one last photo gallery of stuff and things that demand your money or at least your attention. Looky! 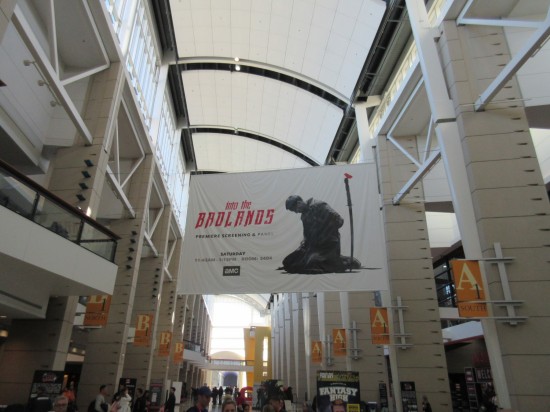 One of the many events we skipped was an advance screening of the final season premiere of AMC’s Into the Badlands, accompanied by head honchos Alfred Gough and Miles Millar. 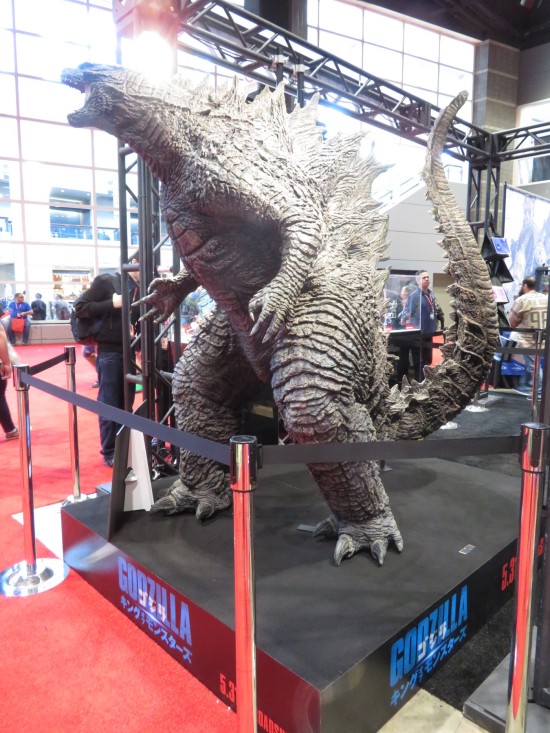 Large-scale replica of the redesigned star of the upcoming summer blockbuster Godzilla: King of the Monsters. 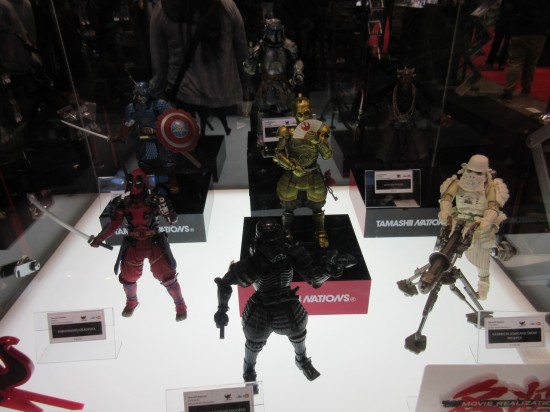 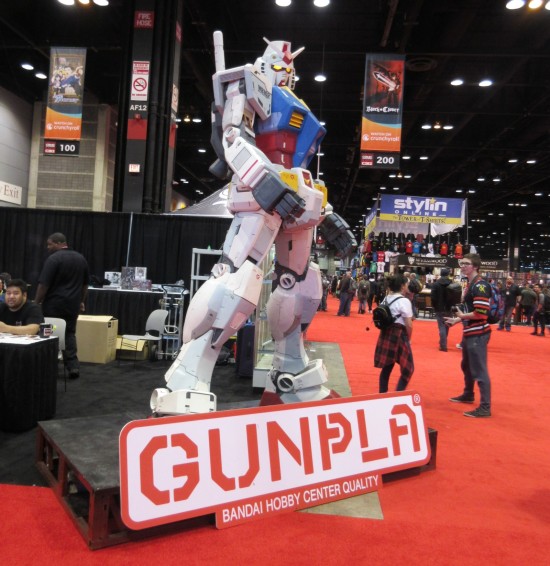 GUNPLA! A.k.a. the wonderful world of Gundam models. 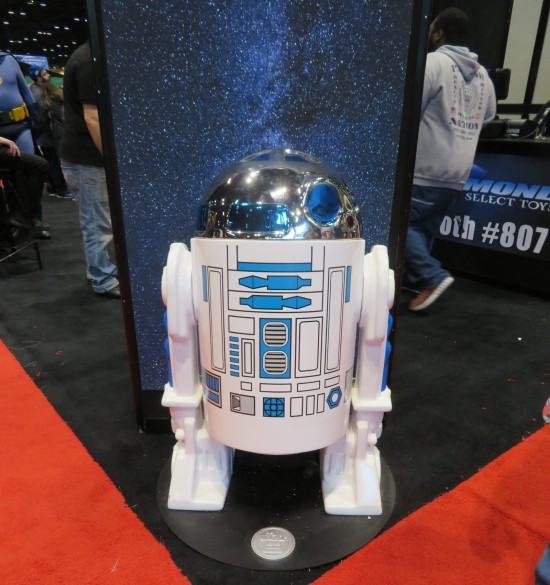 Not just an ordinary astromech droid, but a faithful recreation of the primitive Kenner R2D2 figure that was good enough for us when we were kids. 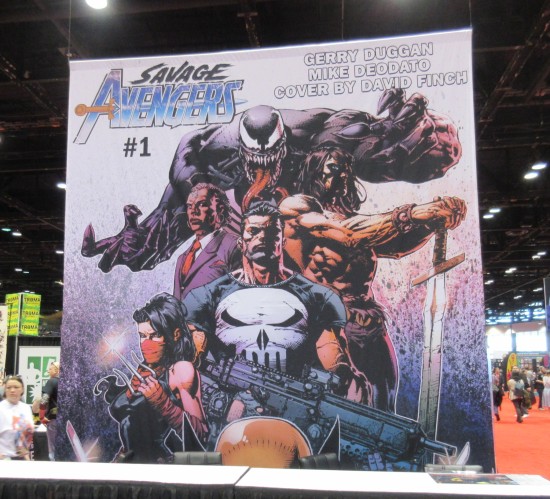 Decor at the Marvel booth included a banner for the upcoming Savage Avengers, which I presume is like X-Force but for Avengers. If that’s Conan the Barbarian I see on the team there, that’s gonna make for interesting reprint complications if and when Marvel ever relinquishes the Conan license again. 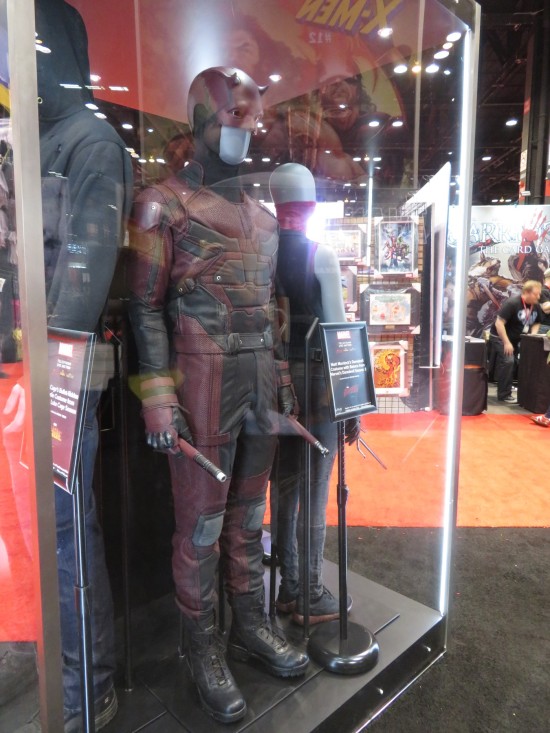 Marvel also brought actual props from their Netflix shows, such as Daredevil’s costume. 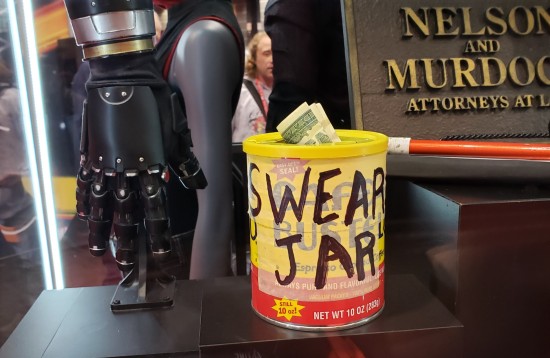 More props: Misty Knight’s cybernetic prosthetic, the swear jar from Pop’s barber shop (R.I.P.), and the sign from the door of Nelson & Murdock. 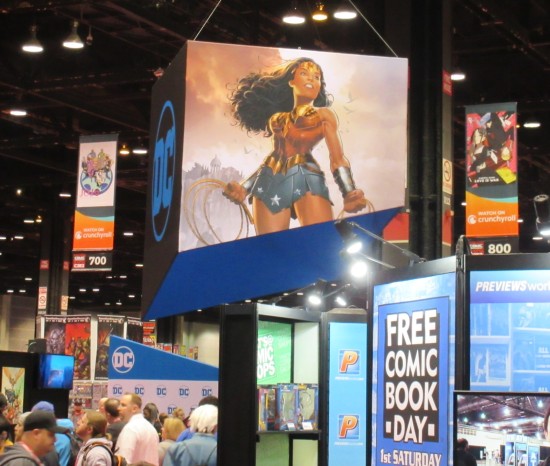 Next door, the same-sized DC Comics needs everyone to remember how much they loved the Wonder Woman movie. 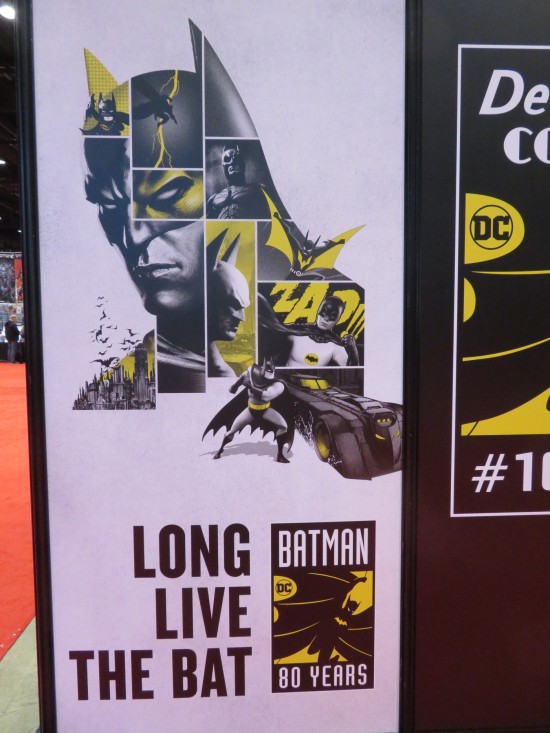 DC was proud to celebrate the 80th anniversary of Batman’s first appearance, celebrated the following Wednesday with the release of Detective Comics #1000, now in stores with loads of variant covers. 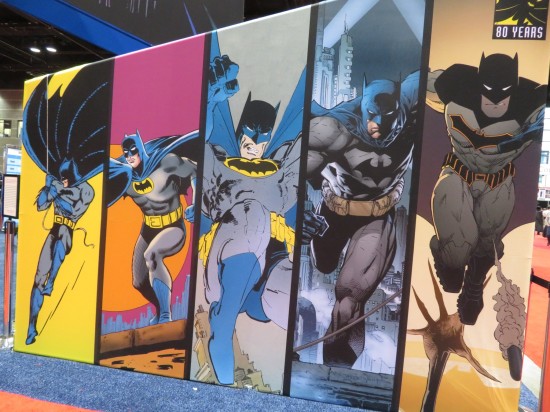 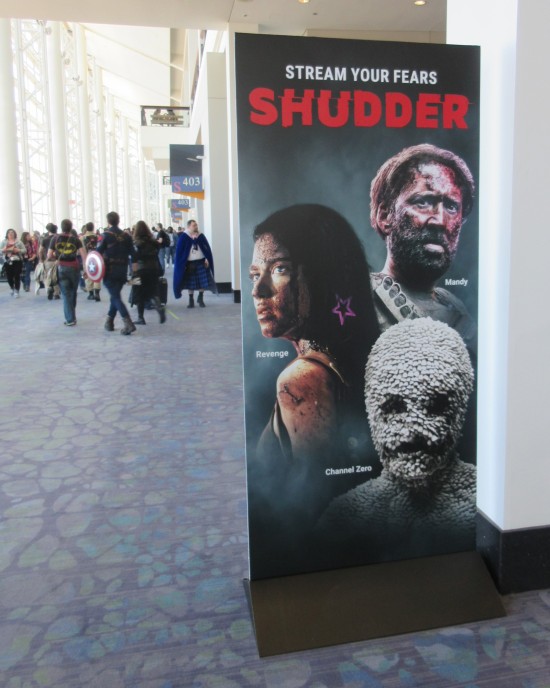 C2E2 was brought to you in part by Shudder, the only horror-flick streaming service audacious enough to bring you Nicolas Cage in Mandy. 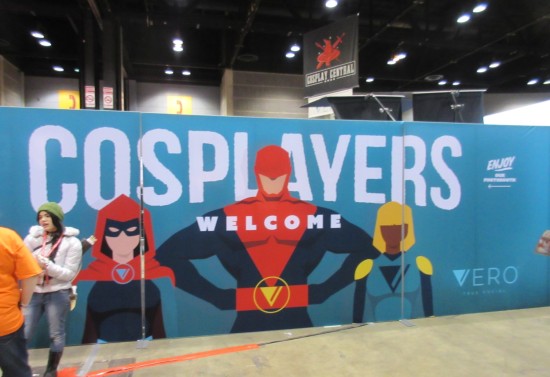 Cosplay Central contained one of this year’s biggest secrets: the booth for Vero (some social media startup or whatever) brought in special guest Ray Fisher from Justice League. Yes, really. There are photos. 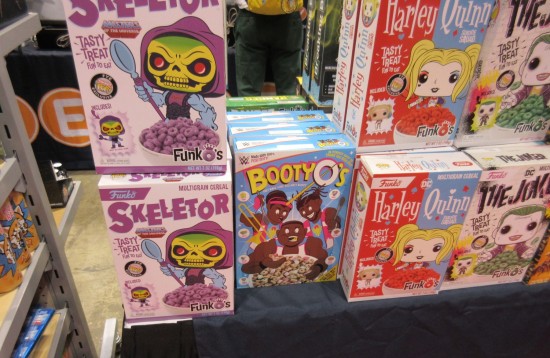 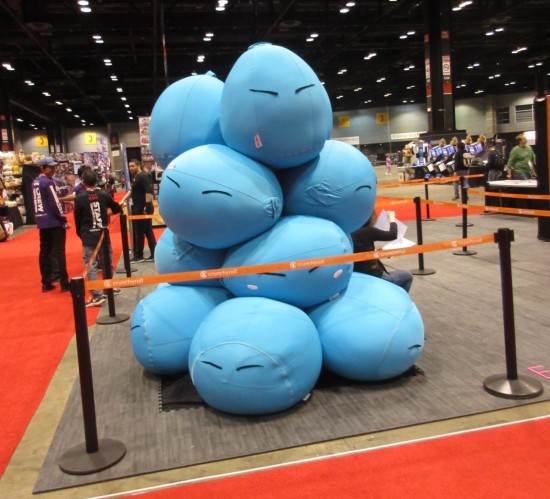 Crunchyroll brought giant blueberries with eyes. I’m sure they had their reasons.

WE ALL FLOAT DOWN HERE! 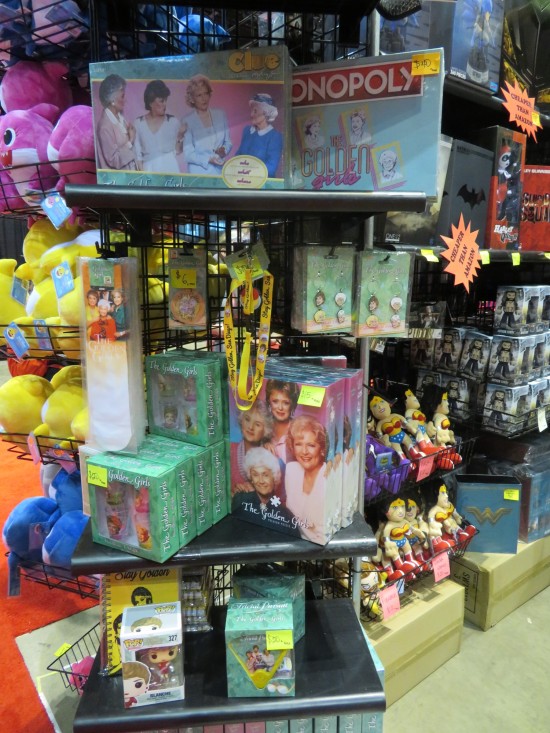 You say you can’t get enough Golden Girls merchandise? Perhaps you spoke too soon.. 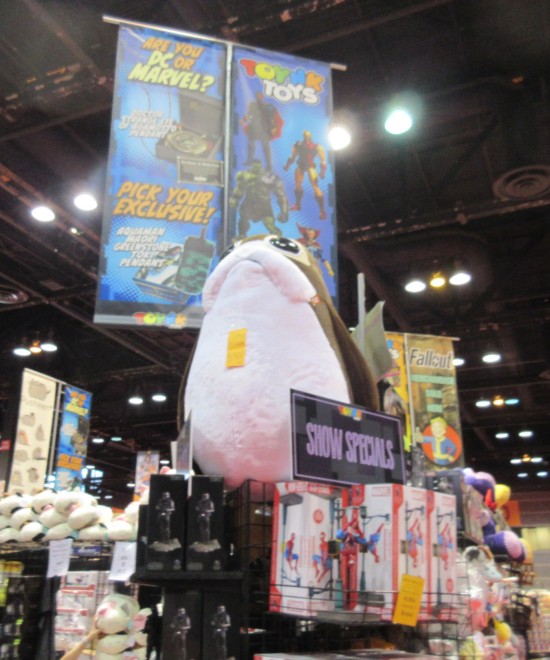 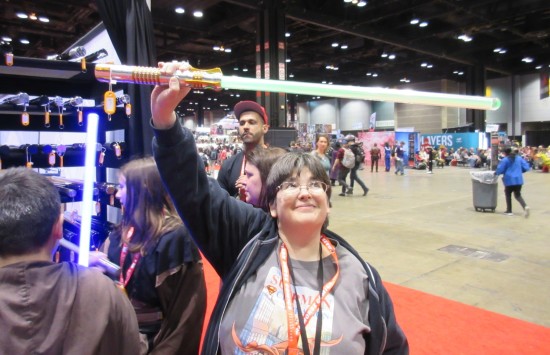 Anne with lightsaber. More foreshadowing. Check back in two weeks for the big payoff!

The End. Thanks for viewing!

Part 1: Paul Rudd! From “Clueless” and Marvel and Stuff!
Part 2: David Tennant!
Part 3: Marvel and DC Cosplay
Part 4: Disney and Star Wars Cosplay
Part 5: Last Call for Cosplay
Part 6: Artists Alley Plus
Part 7: Who Else We Met, What Else We Did