It’s that time again! My wife Anne and I just got home from the tenth annual Chicago Comic and Entertainment Exposition (“C2E2″), another three-day extravaganza of comic books, actors, creators, toys, props, publishers, freebies, Funko Pops, anime we don’t recognize, and walking and walking and walking and walking. Each year C2E2 keeps inching ever closer to its goal of becoming the Midwest’s answer to the legendary San Diego Comic Con and other famous conventions in larger, more popular states. We missed the first year, but have attended every year since 2011 as a team…

…and sooner or later we run out of cosplay photos as a team. It’s time to share all the cosplay that’s fit to print and left to post. Same disclaimers apply as in Part Two. Enjoy! Some more! 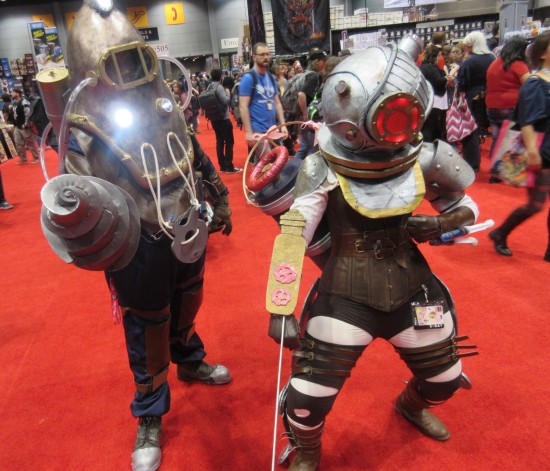 Two of my favorite video game villains, Big Brother and Big Sister from the Bioshock series. 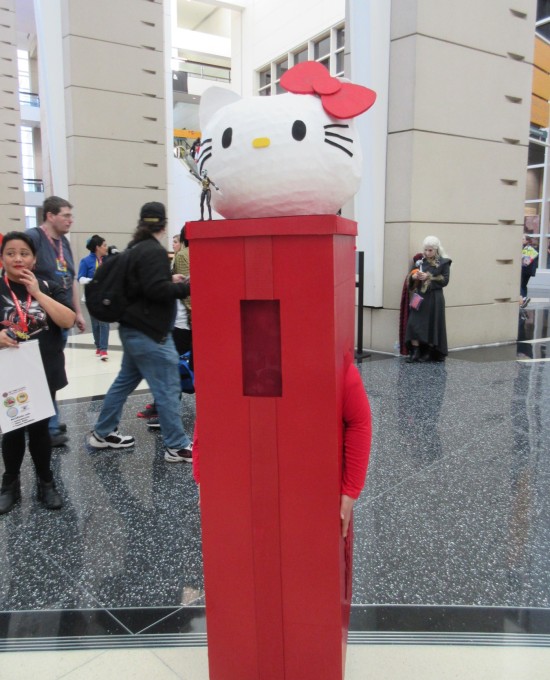 Hello Kitty Pez dispenser, for fans of strangers with candy.

Shaun of the Dead, who insisted it’s not a hard costume to pull off. Even so, a key part of effective cosplay is commitment and follow-through. 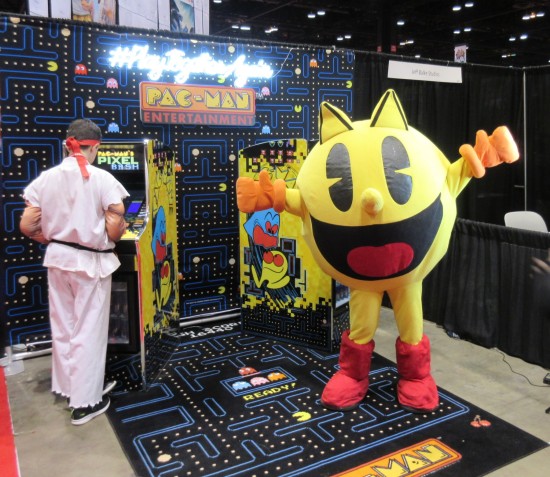 Pac-Man, representing on behalf of an exhibit hall vendor. Call him a “Booth Ball”.

Also shilling on the show floor: Sir Lionel and Susan, each voiced by Hugh Jackman and Zach Galifianakis in the upcoming Laika animated film Missing Link.

If you’ve ever been to a con where dozens of those inflatable orange T-Rex costumes wander around, this cosplayer aimed to get into the role more than skin-deep.

At most cons we end up with a small selection of photos I like to call “Stump the Olds”, in which we share photos of costumes that we thought looked somewhere between fancy and ingenious, and we took their picture even though we have absolutely no idea what character we’re looking at. If someone recognizes any of our next three subjects and can broaden our horizons by identifying them, that would be tremendously appreciated. I’m not quite satisfied with posting blind, unlabeled, anonymous cosplay pics even though thousands of convention-cosplay photogs super-love doing exactly that on Instagram all the time. I aspire to be at least a smidgen better than that if someone’ll help cure my ignorance. Much obliged! 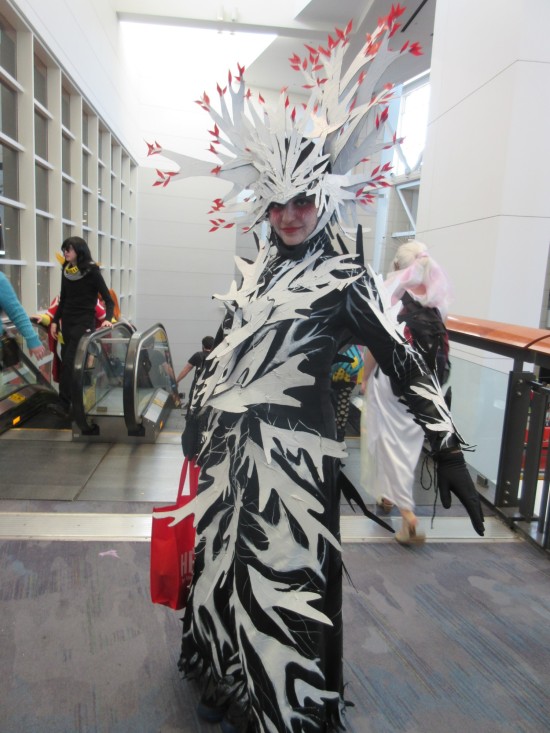 What if Mother Nature got sick of humanity and created her own mystical evil-tree armor to come rain natural sorcery revenge upon us all. 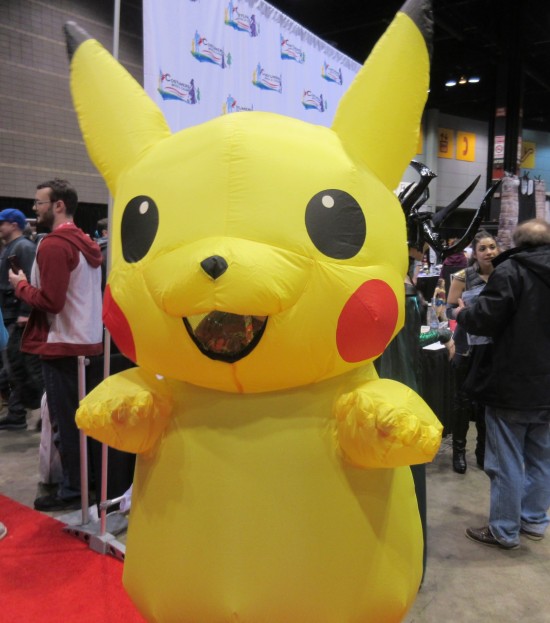 Back to easy, familiar pop-culture territory with Pikachu. Pika pika! See, him I know. 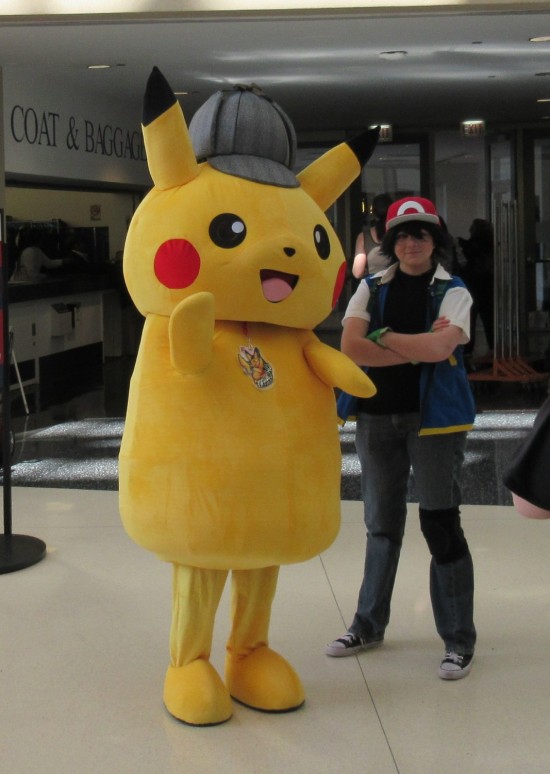 Same Pokemon, movie variant, with his old buddy Ash. We’ll come back to Detective Pikachu in a later chapter.

More faces for us middle-age fans to recognize on sight: TV’s Underdog and Simon Bar Sinister!

Bumblebee from the original Transformers. Calling them “Generation One” just makes me feel ancient, so let’s not.

Teaser photo from next summer’s smash epic Waluigi: Into the Waluigiverse.

Dancing Goku Black and friends out in the C2E2 lobby. 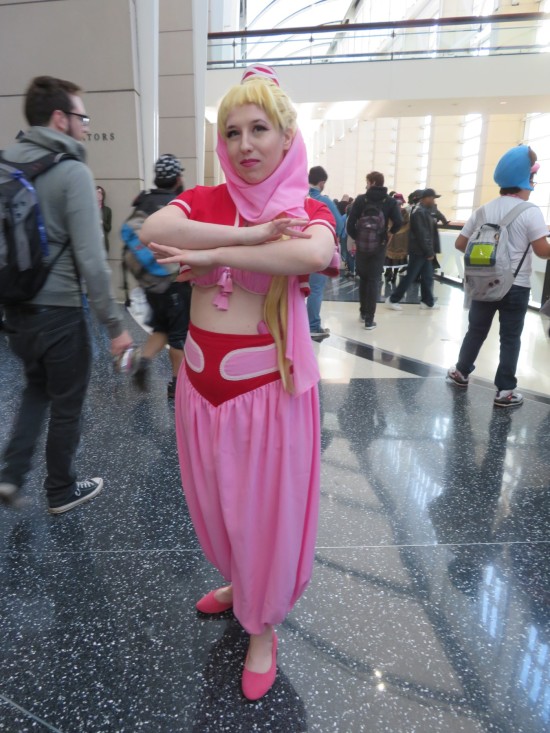 The genie Jeannie, our last cosplay photo of the weekend before we returned to our hotel and collapsed.

Part 1: Paul Rudd! From “Clueless” and Marvel and Stuff!
Part 2: David Tennant!
Part 3: Marvel and DC Cosplay
Part 4: Disney and Star Wars Cosplay
Part 6: Artists Alley Plus
Part 7: Who Else We Met, What Else We Did
Part 8: Geek Commerce on Parade