For the sake of decorum this caption shall attempt neither to quote “Super Freak” nor to reference Dave Chappelle.

During our initial research, we were surprised to discover President Millard Fillmore wasn’t the only public figure buried in Buffalo’s Forest Lawn Cemetery. Their large brochure lists dozens of noteworthy contributors at local levels — leaders, politicians, at least one descendant of George Washington — along with quite a few names known beyond city limits…including but not limited to R&B superstar Rick James, born in Buffalo.

A few presents from fans who made the trip out.

As you’d expect, many Presidents have isolated resting places, whether on their own estates or in official structures not remotely resembling a public gathering, though shared almost always with their First Ladies and occasionally with other family. Really, you’d think the gravesites of all your heroes and icons would be in secret locations where not just anyone could approach them at will, or all in faraway California and not worth a long drive. Between those notions, and the confluence of Millard Fillmore and Rick James in the same cemetery, our solemn in-person experience was easier to handle than the cognitive dissonance induced by seeing their names so closely together in print. Part of me reflexively can’t help trying to imagine them costarring in an ahistorical buddy-cop drama, but it doesn’t work on any level. 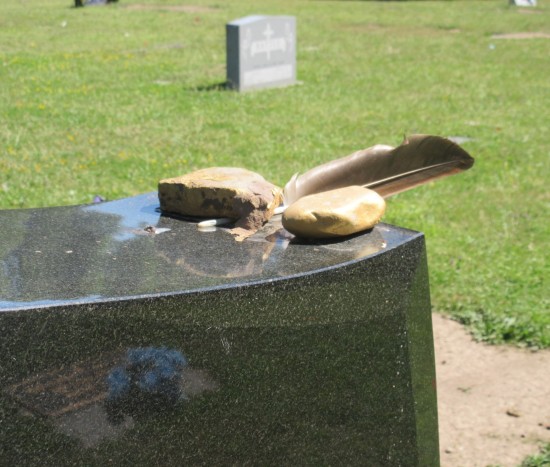 Two rocks and a feather atop Rick James’ tombstone. It’s meaningful to someone out there.

Also in Forest Lawn is a name that goes a bit farther back and higher up in the annals of black history: Shirley Chisholm, the first black woman elected to the United States Congress. She served seven terms on behalf of New York’s 12th District, which at the time covered much of her hometown of Brooklyn. In 1972 she also became the first black politician (male or female) to attempt a serious Presidential bid under one of the Big Two parties. Owing more to sexism than to racism, her campaign was ultimately undersupported and the Democrats instead chose George McGovern, a medically confirmed white guy who would go on to get curb-stomped by Richard Nixon despite the height of the Vietnam War.

I first encountered her name in February 1984 when my sixth-grade social studies teacher Mr. Harper gave our class a long list of names to choose from for doing Black History Month reports. Because it was 1984 in Indiana, I chose fellow Hoosier Michael Jackson, but I made a point of perusing that list up and down for several long minutes, wondering how many we’d get to learn more about in the future. I didn’t get to all of them in a timely manner, but to this day I still get a pinging sound in my head whenever I run across one of those names. Shirley Chisholm, who was still alive at the time and retired from Congress not long prior, was on that list.

Chisholm was from Brooklyn, served in Brooklyn, taught in Massachusetts after she left office, and died in Florida, but Buffalo was her second husband’s hometown. She shares a space with him in one of Forest Lawn’s four mausoleums of considerable size. 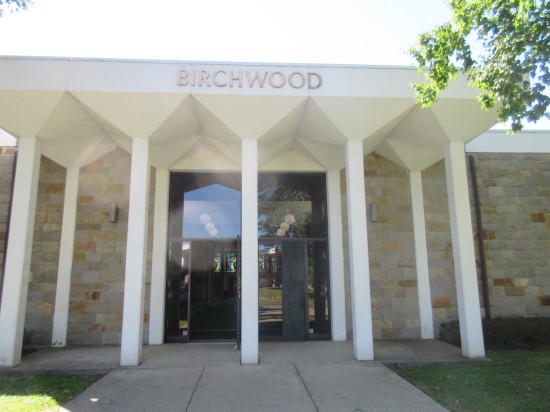 Birchwood Mausoleum, just around the corner from the Visitor Center. 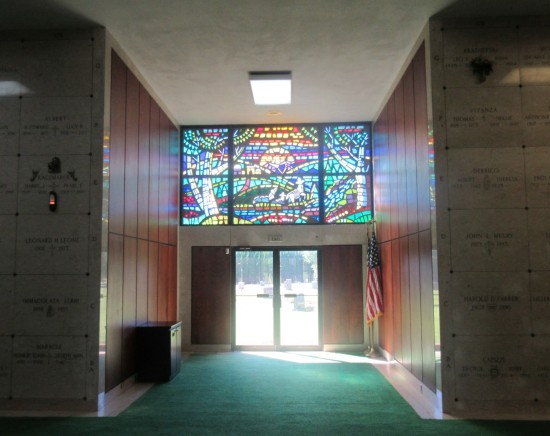 The stained-glass window above the entrance, viewed from inside.

Shirley Chisholm’s vault is in Birchwood’s main hallway, toward the back and on the left side, second from the ceiling. She has second billing below the husband she outranked. “Unbought and Unbossed” was the slogan for her first Congressional campaign.

Current-events trivia: a bill was introduced this past March to erect a statue of Shirley Chisholm on the grounds of the U.S. Capitol in Washington, D.C. As of today it’s still trapped in committee.

Less important trivia: I got an A-plus on that Michael Jackson report and still have it in my files somewhere. I have no idea why.

Also representing for black women, elsewhere in Forest Lawn is Mary Burnett Talbert, an ardent civil rights activist who served as a Red Cross nurse in France during World War I, who co-founded Buffalo’s first chapter of the NAACP before serving nationally as a board member and as their VP, who chaired and/or served with numerous committees and clubs for a variety of social causes, and who fought for suffrage, for historical preservation, and for intersectional feminism decades before that became a catchphrase.

Even with Forest Lawn’s colorful map, it took twenty minutes to find her grave, even after I took out my phone and began consulting other online photos for visual clues. Anne was a little concerned about spending so much time on one name, but the sheer difficulty turned my curiosity into a short-term obsession. I let that side-quest impulse take over.

This roadside plaque was the only read breadcrumb we found, but it’s not actually near her tombstone and had no directional arrows attached.

…and there she is. A paper printout of her Wikipedia entry would be taller than her tombstone, but shorter than the complimentary stick.

We scouted out the Fillmore family plot after Ms. Talbert’s, and had our attention caught by another nearby marker belonging to Levi Spaulding. We didn’t recognize the name at the time, but it was so towering that I made a point of snapping a pic for later research. Short version of the biography: Spaulding was one of General George Washington’s men during the Revolution. He was present through the Battle of Bunker Hill, the Battle of Trenton, the hard winter at Valley Forge, and General Cornwallis’ surrender at Yorktown. His is a pretty solid Forrest Gump-level historical tale.

His crypt is inscribed with nine names in all, the others being eight (!) relatives who also fought at Bunker Hill.

Anne had one more grave in mind to visit, near the southwest corner of the cemetery. On the drive there, we had brake hard for an impromptu interruption by Mother Nature. Three deer entered from stage left, bounded across the path in front of our car, and galloped onward to the northwest and out of sight. We barely had time to react, scramble for our cameras and record any glimpses of them as proof. Mild argument ensued over whose responsibility it had been to capture them all on camera for posterity.

Anne had made the mistake of relaxing and putting her camera way, but she managed to unholster it and snag a deer head, with slightly crisper results than the average Bigfoot sighting.

I realize it makes Anne nervous whenever I drive and point-‘n’-click at the same time, and yet here I am winning the deer photo contest one-handed.

The southwest corner also serves as an alternate main entrance therefore has a panoply of points of interest. The one Anne most wanted to see was the grave of General Ely Parker, a Seneca attorney who served under Ulysses S. Grant in the Civil War. His tombstone transliterates his birth name as Do-Ne-Ho-Ceh-Weh. Upon the war’s conclusion his skill set came in handy for drafting the terms of surrender at Appomattox Court House. After Grant became President, he was the first Native American to be appointed head of the Bureau of Indian Affairs. I had no idea that was ever thing, let alone still a thing. Once again I learned something on this trip. He was originally buried on Algonquin land in Connecticut, but eventually relocated at tribal insistence.

The lettering was superficial and the sun worked against us, but if you enhance, you can see “Do-Ne-Ho-Ceh-Weh” despite Wikipedia. 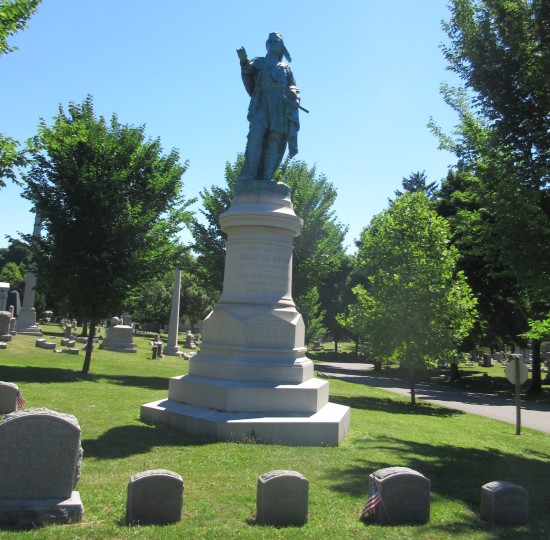 Next to Parker is Sa-Co-Ye-Wat-Ha (“He Keeps Them Awake”), a.k.a. Red Jacket, a Seneca chief who had a flair for impressive speeches, including one notable address to the U.S. Senate regarding freedom of religion in response to intrusive missionaries.

Monument saluting the firefighters of Buffalo and Erie County. 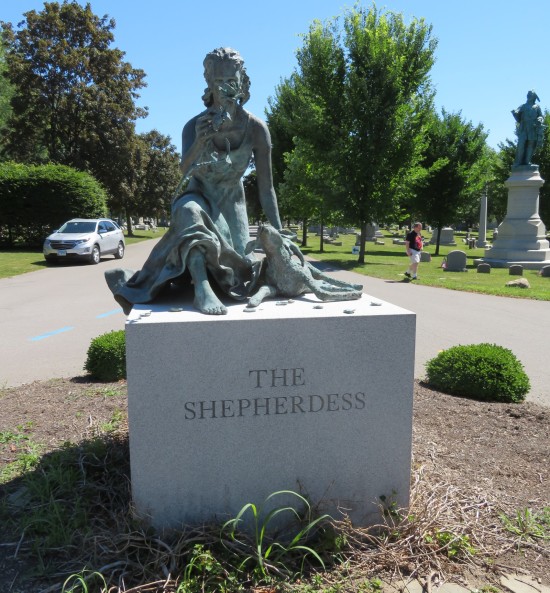 “The Shepherdess” is a 2009 sculpture attached to no particular decedent. The only article I could find online was behind a paywall. She shall therefore remain an enigma.

Not everyone in Forest Lawn is famous or upper-class. But many among its numbers remain deeply loved and missed.