The Trix Rabbit, Lucky the Leprechaun, and Buzz the Honey Nut Cheerios bee welcome you to Jungle Jim’s!

Previously on Midlife Crisis Crossover: last weekend my wife Anne and I drove a quick two hours from Indianapolis to attend our first HorrorHound Cincinnati convention. For us that wasn’t an all-day event, which left us time to wander a bit of Cincinnati. In addition to multiple Kings Island trips over the decades, we’d previously seen parts of the city on our past two trips to Cincinnati Comic Expo, which culminated in a six-part MCC miniseries that included some local attractions. HHC was in a different part of town and inspired us to see what else they’ve put on their map.

Recommendations from friends led us to one of the best groceries every. Jungle Jim’s International Market has been a fixture in the area since the 1970s — 200,000 square feet of foods, drinks, and stuffs from other nations across six continents. For all we know maybe Antarctica is also covered and we simply didn’t look hard enough. In addition to carrying hundreds of thousands of products, the store features a parade of wacky statues, cartoon characters, tongue-in-cheek signage, and odd specializations you’ll be hard pressed to find in your own neighborhood. Its wares are so renowned that folks like us drive from all over the Midwest to check them out and stock up on rare supplies, dabble in culinary experiments, or just let the surroundings overwhelm them altogether.

The following photo gallery represents a portion of what we encountered our first trip, which almost certainly won’t be our last. Enjoy the swell, sweeping, swirling tour! 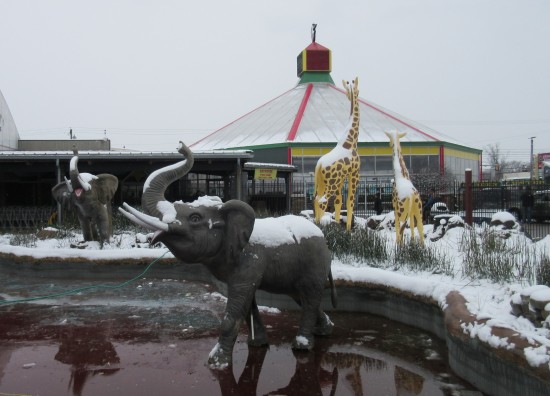 African wildlife greets us outside on this snowy spring weekend. 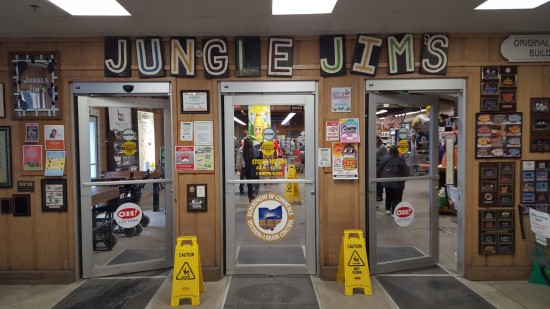 A can of soup in a swing oversees the token American food section. 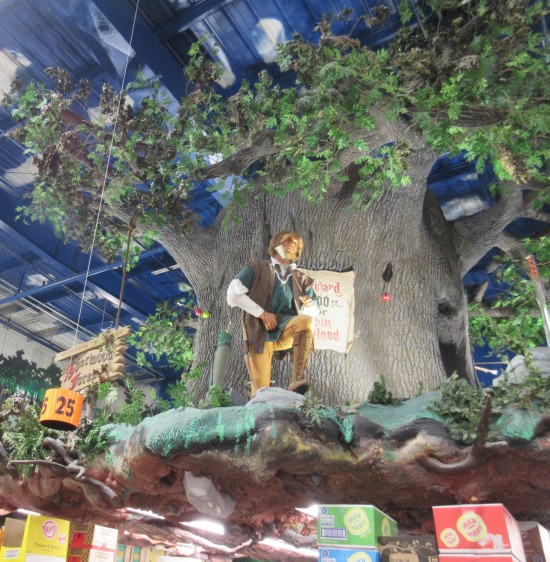 A slightly moving animatronic Robin Hood above the UK aisles poses like he’s about to take from the rich, but then he totally doesn’t. 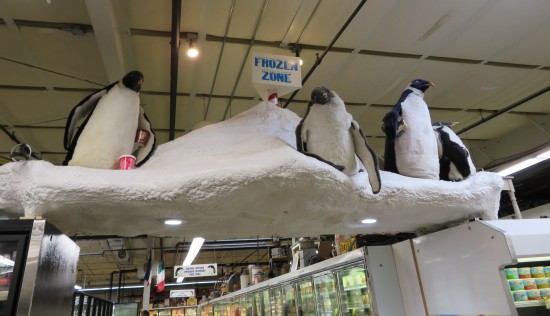 Wikipedia says this animatronic, singing Elvis impersonator is a lion. I thought it was a monkey. Only its manager knows for sure.

The cast of Gilligan’s Island rides aboard an S.S. Minnow parked in the middle of the fresh seafood area.

I’m not sure if choosing your own tilapia holds quite the prestige as picking a lobster at a five-star restaurant, but it’s a featured privilege anyway.

An overhead fire truck marks the largest hot sauce display we’ve ever seen. This is a mere fraction of the options at hand. 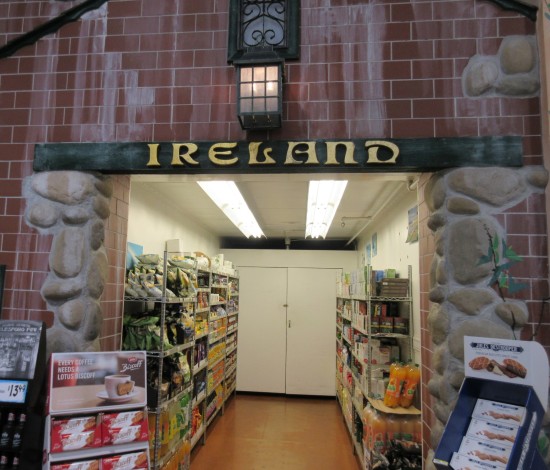 Several European nations such as Ireland have separate nooks in the back of the store.

Trained professionals staff a series of fresh counters, including the first charcuterie dealer we’ve ever seen.

Anne no longer has to wait for the next State Fair to get a caramel apple fix. 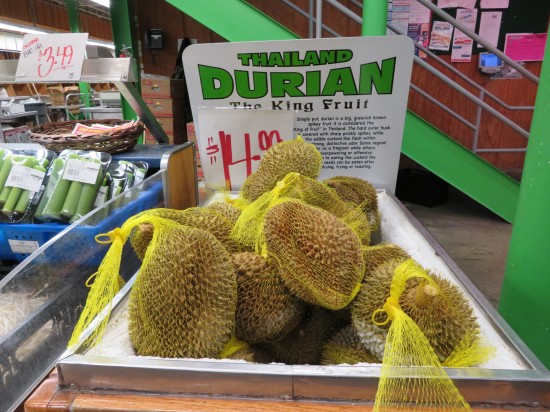 Anne and I have only seen the horrors of durian on TV shows like Chopped, where its existence was deemed unholy and regrettable. My son was once exposed to some in a Chinese food class in college. He had zero kind things to say about its toxic stench.

Python fillets for the discerning, upscale gourmand. They also had bone-in rattlesnake, which…do they even have McNugget recipes for that? 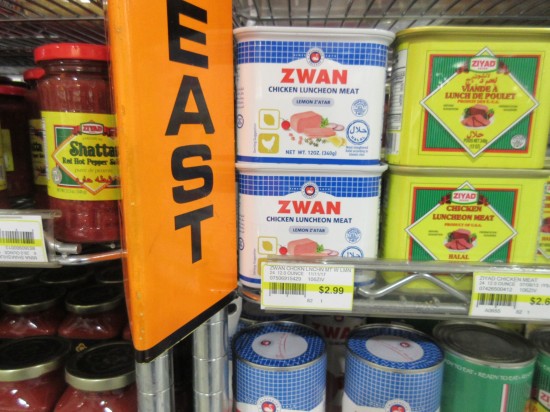 That time Billy Corgan looked at a can of Spam and thought, “Anything they can do, I can do better!” 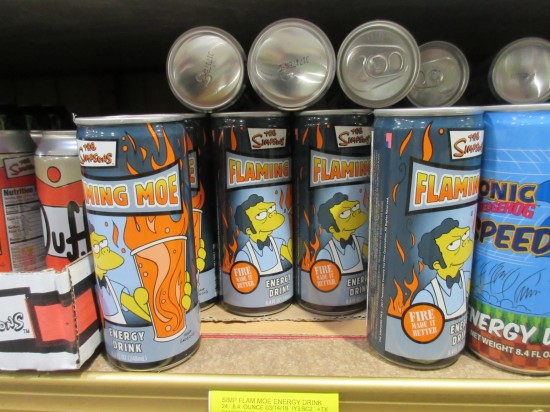 I’m not sure how many of their products are hot bestsellers and how many are discontinued failures. I’m afraid to ask which side applies to Flaming Moe’s. (Fire sold separately.) 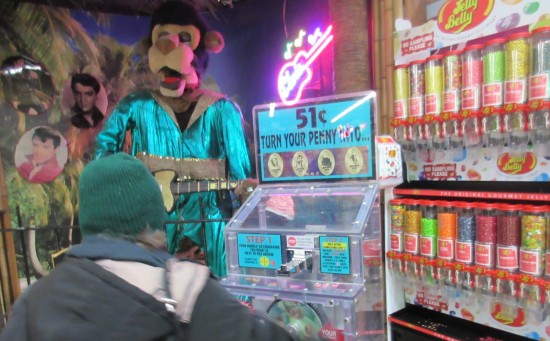 Anne’s favorite part: a smashed penny machine! Another set of travel tokens to add to her collection. 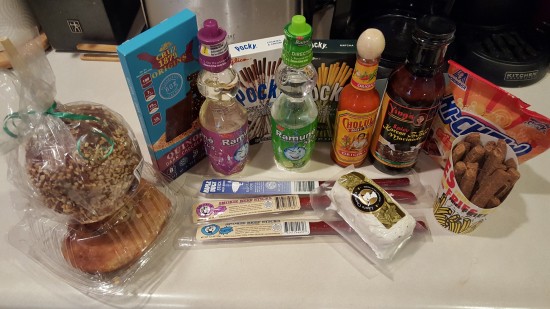 Some of the loot we brought home, including some Japanese snacks for my son and treats for the doggo.

We ended up spending nearly as long at Jungle Jim’s as we did at the horror con. And Jungle Jim’s is open all the weekends of the year, not just the one. Advantage: Jungle Jim’s.

Maybe on our next visit we can dig a little more deeply into the obscure and the exotic, when we don’t have a steadily worsening snowstorm on our tails.