Previously on Midlife Crisis Crossover: a flashback to our fourth annual road trip, a meetup in Grand Rapids with fellow Star Wars fans for opening day of Star Wars: Episode II — Attack of the Clones. Before and after the movie, we spent our first time in Michigan hitting a few key tourist attractions in the vicinity.

In Part 3 we walked you through the scenic greenery at Frederik Meijer Gardens & Sculpture Park, years before a series of subsequent expansions turned it into one of Grand Rapids’ largest attractions. But as the name implies, we saw more than just gardens. Assorted sculptures are on display for the art lovers curious to see human creations in the natural mix. The largest piece by far is Nina Akamu’s 1999 The American Horse, which would be quite the destroyer if magic ever brought it to life. 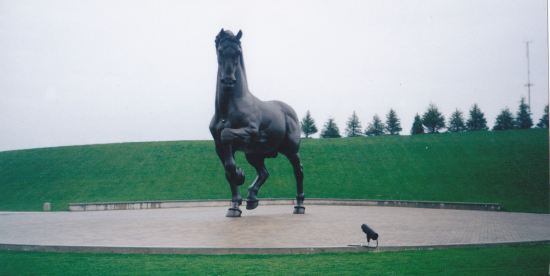 The Horse looks more peaceful without us standing next to him for visual reference.

Inspired by a 15th-century work by da Vinci, the bronze stallion is over twenty feet tall, twenty-eight feet long, and I couldn’t tell you how many tons. It has a twin in Milan, Italy, called Il Cavallo that debuted first, with three smaller replicas following in other locales.

Definitely less peaceful up in his personal space.

Their sculpture section isn’t vast, but it was a good start for rookie travelers like us. The philanthropy of the Meijer family and the space they set aside for pure aesthetics would set the pace for our dalliances in other art museums in the years ahead in Manhattan, Denver, Chicago, Birmingham (sorta), and our very own Indianapolis Museum of Art, among others.

No just outside, art peed at us here and there throughout the greenhouse, including at least one dedicated room, in which I amused myself by demonstrating how if you applied extreme college meaning extrapolation principles in all the wrong ways, you can pretend every single piece of art ever made somehow embodies The Duality of Man.

Roy Lichtenstein’s Bonsai Tree is one of many existing efforts that show he had a life beyond plagiarizing comic book artists. 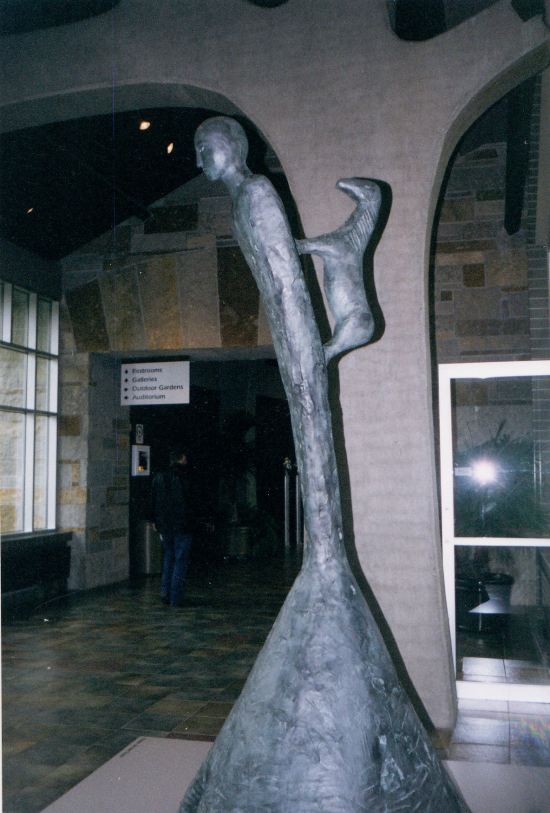 Tana by Italian sculptor Mimmo Palladino would make a good cover for a future edition of The Horse and His Boy. 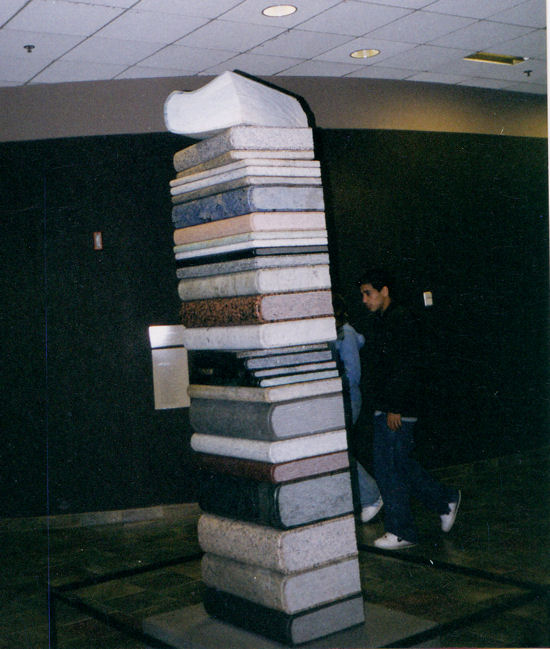 I’m assuming this was a sculpture and not some employee’s onerous college homework.

Not pictured was a series of sculptures whose artist and title are forgotten, but comprised the life cycle of a decomposing slice of blueberry pie. While our quartet observed and tried to “get it”, a security guard walked over and started joking along with us. There’s something you won’t find in your average art museum.

For us commoners, the greatest art of all was that which required no explanation and enabled the most satisfying interaction: a big turtle we could take turns play on. 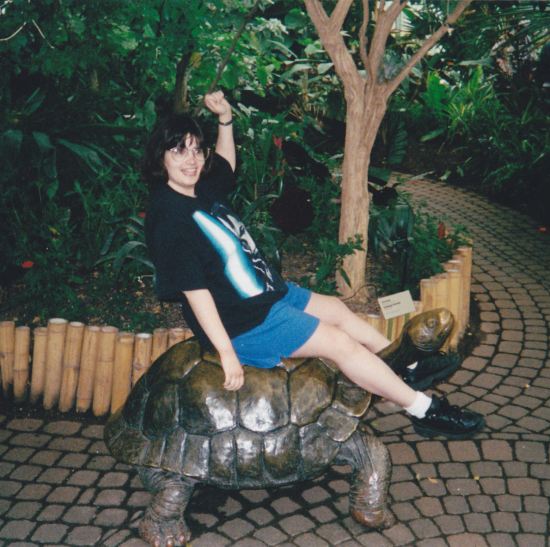 For Anne, the turtle served as a mighty steed.

For Shannon, the turtle was a wrestling opponent who never stood a chance.

For me the giant turtle was not a foe to vanquish, but an exemplar to contemplate. Through its simultaneous exhibition of a slow-witted demeanor bereft of reflexes and a shellacked exterior capable of deflecting all but the harshest of missiles and criticisms, this inanimate giant turtle’s thick skin symbolizing nobility and dense brain symbolizing sin taken together might well exemplify…The Duality of Man.

To be concluded! In our miniseries finale: how we got political on the way home…