We’ve posted several photo galleries over the years starring just flowers and plants, but none looked as cool or as lethal as these echinocactus barrels.

Previously on Midlife Crisis Crossover: a flashback to our fourth annual road trip, a meetup in Grand Rapids with fellow Star Wars fans for opening day of Star Wars: Episode II — Attack of the Clones. Before and after the movie, we spent our first time in Michigan hitting a few key tourist attractions in the vicinity.

In between movie showings, our friends Katrina and Shannon had us detour for one of the largest attractions in Grand Rapids, the Frederik Meijer Gardens & Sculpture Park. Opened in 1995 courtesy of the folks at Meijer — one of our larger big-box grocery/department store chains here in the Midwest — its 28 acres were donated to the city for use as a grand celebration of cultivated art and greenery. According to Wikipedia, Meijer Gardens has more than quadrupled in size since our 2002 visit. Our once in-depth examination is now an obsolete scratch across the surface of the flora and fancies that are surely like a standing army today. I suppose that’s what we get for arriving unfashionably early.

How Meijer Gardens looked to us back in the day. By 2030 I trust it’ll be an amusement park with roller coasters and animals made entirely from sentient super-seaweed.

Their greenhouse remains the largest we’ve ever entered, far as I can recall. Even if the flowers had been dull, the architecture alone boggled the eyes.

Numerous climates are represented to varying extents, particularly tropical regions, deserts, and other areas we’re likely never to live. The cactus collection just happened to catch my eye more often than its competitors. 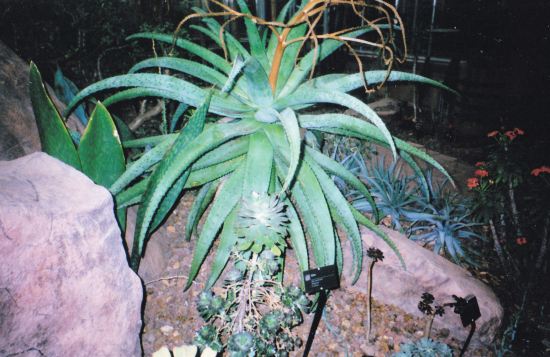 Speaking of my eye and how often it was caught: it’s odd in retrospect how many of these flower photos have survived in our records to this day, while other attractions pale in comparison, in both intact visual records and in our memories.

If you compare this assortment to Part 5 once it’s posted, you’ll notice a glaring disproportion in their quantities. I mean, I get why we’d want to remember sights such as this imposing stone arch over the walkway…

…but why would I care about these pedestrian potted plants? Was it the sign of non-green color that leaped out at me? Or nostalgia for when my grandma would water her houseplants? Or was this photo an accident?

Meijer Gardens was fun and we’ll show off more of it in Part 4, but it’s unfair to me that more than half of the Grand Rapids pics we didn’t lose are plants, plants, and more plants. That’s sort of fine, but wasn’t actually the focus of our trip.

Now see, this photo makes sense. This is an object that says to me, “I deserve to be noticed. I deserve a caption.”

…but sometimes that’s just the uncontrollable fickleness of mortal belongings and the things we meant to carry. Sometimes what we thought we packratted isn’t always what actually made it into our moving boxes and shelves. At least when plants are dislodged and disintegrated into the winds, you can just replant seeds and trimmings and with patience let the Circle of Life return them to square one. For us differently adaptable mortals, all we can do is make the most of what was left behind. Hence this inordinately preserved green-thumb gallery.

To be continued! In our next chapter: what passed for interactive art circa 2002, technically.