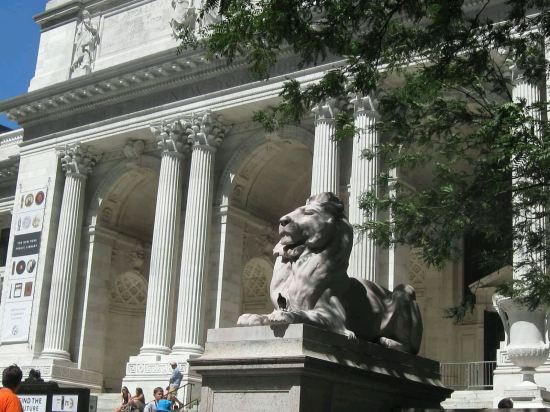 Hi, we’re the lions at the New York Public Library! You might remember us from such films as The Wiz and Roland Emmerich’s The Day After Tomorrow! We have a terrible agent.

Considering how many films have been made in New York, it wouldn’t be hard to create a vacation itinerary made entirely of sights Hollywood has already shown us. Retracing the steps of those filmmakers can be fun, but it’s especially rewarding when they lead you to unexpected treasure.

We awoke on our last full day in the Manhattan area to the local morning news breaking a story about another fatal shooting incident in Newark. My reaction: dull surprise. We’d had more than enough of the mentions of lovable Newark, where every downtown wall was a graffiti guestbook and every passerby could be your next opponent.

TV also tipped us off to another potential travel obstacle: live on stage in the middle of scenic Rockefeller Center, The Today Show welcomed very special guest Chris Brown! We watched with concern as the beloved felon lip-synched “Forever” to a crowd of 18,000 Auto-Tune fans. We didn’t relish the effect of that influx of concert-goers on the morning subway flow.

Before boarding the bus, for breakfast we walked across the street to a business center food court, where I grabbed an official New York bagel sandwich from a local vendor and my son got a footlong chicken teriyaki sub from Subway. I hated to betray the salt-pepper-ketchup? couple for the sake of convenience, but I needed to scratch “New York bagel” off my to-do list, and their cart didn’t sell bagels. Our vacation time was growing short. Sacrifices had to be made for the greatest good.

Outside, we waited for just a few minutes until the #159 pulled up, driven by the same uncomfortable staring driver from the morning before. He stared at us again, for a minute, then blared at us over the speaker for all of Jersey to hear, “YOU GOIN’ TO PORT AUTHORITY?”

Anne stepped up and explained that our prepaid passes were for the #158.

Even though we were now in earshot, he still broadcasted to one and all, “SAME THING,” and invited us aboard. I wish we’d known about a week sooner that the bus passes were interchangeable.

We put this humiliation behind us, moved on to the Port Authority, took the E train to the 7th Street station, switched to the D train, and exited in the underground Rockefeller Center station, one level below where the 18,000 screaming Chris Brown forgivers had convened earlier. By now they had either already dispersed or refused to leave the TV zone until they could have a chance to tear clothing samples off him.

Luckily my mission could be conducted entirely below street level. A convenient set of hallways led us from the station directly to the NBC Studio Store, where I bought myself a replacement “Troy and Abed in the Morning” mug. After what happened to the first one I bought, we weren’t leaving New York without one. If it meant losing my job and home, I was prepared to weigh my options. I’m happy to report this mug, unlike its predecessor, arrived home safely in Indianapolis and is now my ultimate coffee mug of choice. And we both lived happily ever after.

In hindsight I wish their theme song was more than six words long so I could sing it while typing this.

Without surfacing and risking the Gauntlet of Forever, we retraced our steps to the underground station and took the D train to 42nd and Bryant Park. When we returned to daylight, I lost my bearings at first and began second-guessing myself because nothing in front of us resembled what I thought it should.

This wall-mounted quote from James Joyce’s Finnegan’s Wake told us we were on the right path.

Then I turned around 180 degrees, and right there behind us was the New York City Public Library, As Seen in Ghostbusters.

Stupid smug library, thinks it’s so smart trying to hide from us behind those flimsy trees. 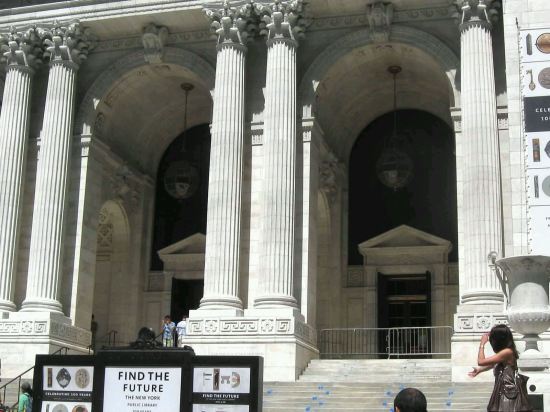 The library was celebrating the centennial of its opening by looking forward to the next hundred years.

If this were a musical blog, this would be a fine point to add a duet on “If I Were King of the Forest”. If only we’d thought ahead.

If the lions should fail to defend the library to the best of their ability, this backup god is prepared to step up at any time.

For those who fear the lion statues out front turning into Vince Glortho, standing guard inside are Lego lions a little less likely to be possessed by primordial demons.

Because FAO Schwarz doesn’t have a monopoly on Lego avatars.

Up in a remote area of the third floor is the Reading Room, As Seen More or Less in Ghostbusters, though the anachronistic monitors dispel the illusion of movie greatness.

We wandered a few other rooms at random and found art here and there, including this piece that I’m guessing highlights Moses getting rowdy at the base of Mt. Sinai over those Commandments.

For less abnormal people, the children’s section down in the basement has an even better star attraction: Christopher Milne’s original dolls that inspired his dad’s lifetime achievement that later became a cornerstore of the Disney empire. Behold the greatness of the original Winnie the Pooh and gang in their No Flash Photography rest home. 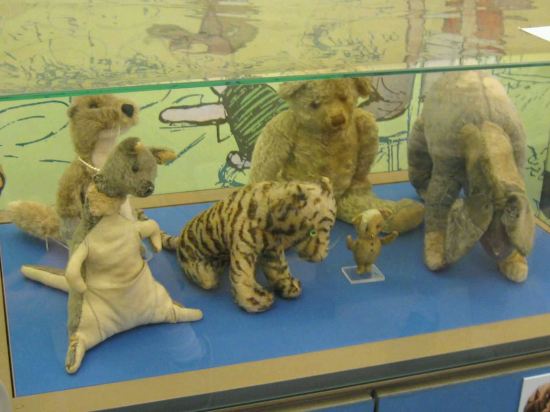 Tubby little cubby all stuffed with fluff! And his little friends, too! 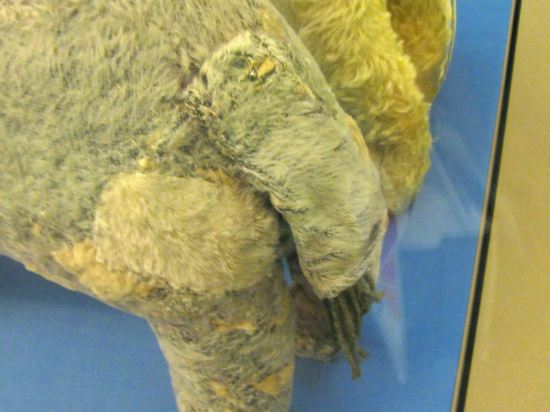 A closeup of their aging, disheveled fur reveals why strict precautions were taken for the sake of their preservation. 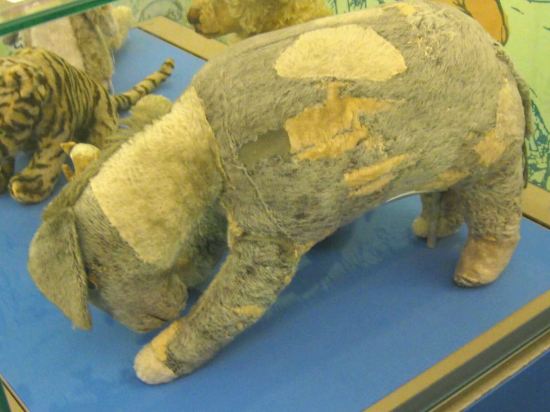 The tail of course belongs to OG Eeyore, who was naturally first to catch my eye because even as an adult I occasionally have moods just like his.

I wanted to take a few more photos till I realized we were blocking the view of a class field trip (camp? summer school?) on its way into the room. We bowed out and let the kids learn some literary history and/or see some off-limits toys.

There wasn’t much else to do without benefit of New York library cards or a list of reading material to pursue. We returned to the subway station below, walked to the far end of it, and traveled to Grand Street for a special encore presentation.

1. The photo of my Troy and Abed mug is new for the occasion. Still in use, still a prized souvenir, still one of the best pieces of licensed merchandise I’ve ever owned.

2. As of this writing the reading room is closed for renovation. Pooh and friends are still on public display, though.

3. I had myself an Eeyore mood for a few hours earlier today. Maybe someday I’ll outgrow those.]