Witness our first photos of Manhattan taken during — and stitched together after — our 2010 road trip, from the ferry on our way from the New Jersey shore to Liberty Island. A separate road-trip series for another time.

[Welcome to the first installment of a very special miniseries, representing the original travelogue from our family’s 2011 vacation to fabulous New York City, by which we largely mean Manhattan because we ended up skipping our to-do lists for all the other boroughs. Additional stops in New Jersey and Pennsylvania may not be proper consolation for anyone who was hoping to hear our thoughts on Coney Island or the Bronx Zoo. We’re revisiting this now because we’re planning on revisiting NYC in July 2016, hopefully with a better eye toward the areas beyond the rivers.

Some hindsight editing and modern-day commentary will be included along the way as value-added bonus features for readers old and new alike. All photos were taken either with my first Canon PowerShot or with my ancient Kodak EasyShare that became my wife Anne’s hand-me-down device for the next few years. Very little about these entries will approach 1080p quality, but we’ll do what we can with the materials at hand. Despite the Great Hard Drive Crash of July 2015, my wife saved backups of all of our digital vacation photos to Shutterfly, and you have no idea how excited I am to report that, on this very night, I’ve figured out how to download decently sized file copies for free instead of resorting to frustratingly inadequate screen shots. Science marches on.

Every year since 1999 Anne and I have taken a road trip to a different part of the United States and seen attractions, wonders, and events we didn’t have back home in Indianapolis. From 1999 to 2003 we did so as best friends; from 2004 to the present, as husband and wife. My son has tagged along each year since 2003.

For our 2010 vacation we visited Philadelphia and other convenient destinations along the Pennsylvania Turnpike. We spent one day on an off-topic digression into New Jersey, where Liberty State Park provided us ferry access to the Statue of Liberty. While Anne was engrossed in the statue and all that it has signified ever since the French loaned it to America in a previous century, my son and I were distracted by the long, gleaming coast of mighty marvelous Manhattan that beckoned to us from across the river. A mysterious, tempting voice whispered to us in our minds, “Over here, boys,” in a thick Brooklyn accent.

My son has only two years of high school left and will someday be excused from our vacations. In recent years he’s developed the disdain for quiet small-town life that commonly sets in among 95% of all Hoosier teenagers. He looks forward to moving out someday and arranging his own airfare or stowaway passage to other continents. Before the time comes for him to sally forth and start making his own independent agenda and mistakes, I figured the least we could do is heed the siren call of the Big Apple while we had the chance.

First step for our road trips is always our awaiting chariot. Renting a car was arguably a waste of funding, since I’d bought a new car just three months before and this one ended up sitting in our hotel parking lot unmoved for five days straight. Mostly we used it to store spare change and dirty laundry. But we wanted some measure of comfort, extra leg space, and cruise control (which said new car sadly lacks) during the long drives there and back again. Hence the Nissan Rogue. It was just okay, not a standout from a performance standpoint compared to past rentals. 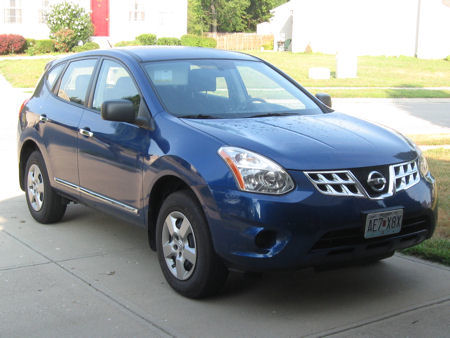 This isn’t a paid plug, as MCC isn’t the kind of blog that gets offers to do sponsored posts. It’s just that car rental is one of my few opportunities to play with new toys.

Also not a standout: all of Ohio. Typical of all of our past eastbound vacations, their big fat lengthy state was an unavoidable geographic obstacle whose interstate mediocrity consumed the bulk of Day 1. Their trees are duller than Indiana’s , their roadside attractions are nil, the noise barriers blocking our view of too many roadsides are drab and lifeless, and there’s always at least one major traffic blockage to throw off our ETA. If Ohio didn’t exist, and if Pennsylvania lost some weight, I can just imagine how many states would become scintillating one-tank trips for us.

I tried to use the radio to keep our minds off Ohio. No such luck. Our hometown random-decade pop channel, My107.9, stayed within range for hours, but is the aural equivalent of the wall at TGIFriday’s and didn’t hold our concentration for more than ninety seconds at a time. Not even popping in CDs helped us cover the distance any more painlessly. For hours upon hours all we saw, all we knew, all we were was Ohio, Ohio, Ohio, Ohio, Ohio.

We tried curing the monotony with a stop for lunch at a random Wendy’s in a town called Pickerington, which sounds like a punchline from a Mr. Belvedere joke. Competent fast food, light window-shopping at a Target down the street, and a mandatory gas station visit did nothing to neutralize the Ohioness of it all.

Random notes along the way:

* We wish our home church had a name half as cool as Rushing Wind Biker Church.

* Some well-meaning organization authorized a billboard proposing “ending homelessness one life at a time.” Hopefully this wasn’t a gated-community version of The Most Dangerous Game.

* “Sara Smile” sounds like a soundtrack for a slo-mo beverage commercial.

* The town of Bedford shamelessly referenced GEICO with its own roadside tourism ads: “So close a caveman could find it.” Would he want to?

Ages later, Ohio sluggishly stepped aside for West Virginia, which said hi to us for about a minute-and-a-half. I-70 East cuts through its upper corner before leaving as quickly as possible.

West Virginia has the Appalachians going for it, so those are nice.

I-70 then delivered us safe and sound to our old friend Pennsylvania. Once again the Pennsylvania Turnpike sped us along our way through much more varied pastoral landscapes, through its four mountain tunnels that all seemed to be missing more wall tiles and leaking more water than last year. Erosion and entropy are not the kind of sights you want to see while driving beneath 1000+ feet of theoretically solid mountain.

Our unremarkable hotel was in unremarkable New Cumberland, just off a construction site doubling as a narrow, dangerous turnpike exit. Dinner was four construction sites down at Culhanes Steakhouse, where the food was so-so and the local business advertisements on the back of the menus included two funeral homes. We counted our blessings nonetheless. Blessing #1: this wasn’t Ohio. 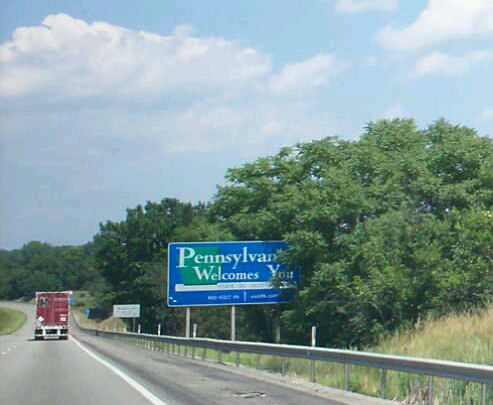 1. The reason for all the Ohio hate: on our 2004 drive back from Niagara Falls, a series of unfortunate events all happened to us within their borders over the course of several drawn-out hours. ‘Twas a tale fraught with surprise car breakdown, a miraculous Home Depot parking lot, an overturned semi, an exit with no reentry ramps, and my old nemesis Subway. Also, we’ve seen Ohio every time we’ve gone to Kings Island over the years, so on a certain level we’re tired of them.

2. Our longest West Virginia experience to date occurred on our 2008 road trip, when we visited Charleston and spent a night in a hotel hosting an American Legion convention, whose alumni indulged in poolside country-music karaoke all night long four floors below our window.

5. Local radio station My107.9 was transformed in 2013 to a new identity and even blander format, which I wrote about at the time. In a bit of encouraging cosmic confluence, I was reminded of that entry this very Saturday morning when one of the DJs I name-checked in that story left me a nice comment three years after the fact. Awfully nice of him.]