For Father’s Day weekend my wife and I drove up to Lafayette to hang out with my son and catch a showing of Jurassic World a week after the rest of the world already saw it. We headed over to the nearest theater and found ourselves greeted by the above-pictured phantasmagorical ursine sentinel, who totally wasn’t there last month when we saw Age of Ultron.

Officially titled “No Place Like Home”, this bear is one of forty commissioned by the Art Museum of Greater Lafayette as part of an art-awareness project called “Lions and Tigers and Bears, Oh My!”. Further details are available on their official site, including a map to the other thirty-nine in the series, which will be on display through mid-September. Frankly, I can’t imagine another bear topping this one.

I won’t pretend to understand why the Guardians and Oz are sharing a bear. Rocket is his face, Star-Lord is like his wingman, Ronan the Accuser is an irritated lymph node, and for some reason he has tattoos of the Scarecrow, the Kansas tornado, and Oz’s balloon sort of wandering around the Yellow Brick Road and the Blue Baum-Bear Brick DMZ.

I apologize sincerely for only capturing the edge of Gamora, who’s stewing on his right shoulder. As a sort of peace offering, please enjoy some Groot-uitous bear butt.

Don’t ask me. I’m just the guy who happened to have a phone with him.

The preceding expression of pure imagination in the form of a bear who got Hooked on a Feeling and went Somewhere Over the Rainbow is brought to you by the natural miracle of ROY G. BIV and the credits-where-due on the base plaque. 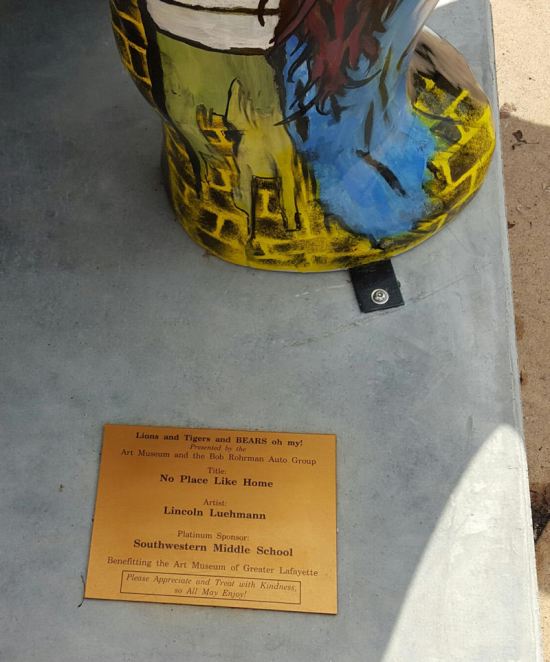