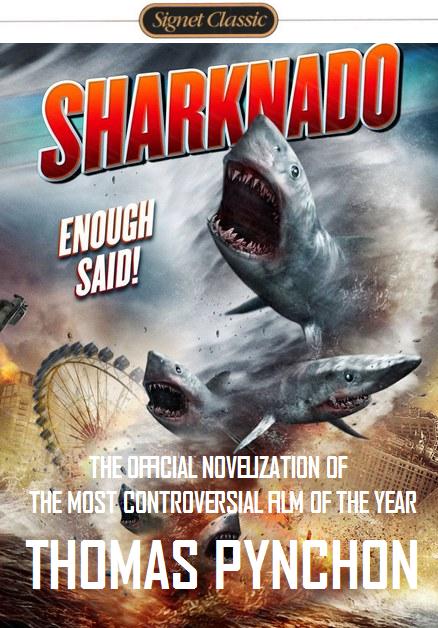 When my wife and I threw caution to the wind and watched Sharknado on Syfy (as previously reported), we were curious to know why the internet wouldn’t shut up about it. By the time the end credits sped by and Ian Ziering was transformed from a 90210 also-ran into a chainsaw-wielding hero soaked in shark fluids, we had learned an important lesson and vowed never to be curious about anything ever again. We also didn’t speak to the internet for three days.

Outside our household, Sharknado-mania is allegedly sweeping the nation. Consider the following recent headline stories:

* The initial Syfy airing of Sharknado drew a just-okay 1.4 million viewers. Thanks to rampant discussion about viewer bewilderment, the first encore attracted a slightly larger audience of 1.9 million. In an unprecedented development for Syfy, the second encore hypnotized 2.1 million unsuspecting victims. If the math bears out, permanent nightly Sharknado reruns could one day surpass The Walking Dead in popularity.

* The filmmakers have announced a sequel is now in the works with a Manhattan setting and a summer 2014 release date. A year should be more than enough time to “write” some dialogue, cast anyone who needs work, film random scenes of panicking, scrounge around for more stock footage of sharks, stitch it all together, use MS Paint to splatter in some effects, and deliver a finished product months ahead of schedule.

* This past Friday, Fathom Events arranged a midnight showing of Sharknado in 200 American theaters as a stopgap measure to quell the ludicrously increasing Sharknado demand that has yet to be sated by Syfy reruns or constant On Demand replays.

* In the wake of this inexplicable phenomenon, Syfy announced this week the coming of Sharknado licensed merchandise.

Frankly, I’m baffled. Outside the entertainment industry, how many other businesses can create a demand for intentionally defective product? A situation in which the consumer not only forgives the defects, but relishes them? If this same service ethos is applied to the entire line of Sharknado products, I can’t wait to see other pre-obsolete items on sale such as:

* Sharknado T-shirts with one sleeve missing and the logo printed in Comic Sans.

* Sharknado action figures with zero points of articulation, no resemblance to the actors, and painted only in neon shades of green and orange.

* Sharknado fruit snacks sold in unsealed wrappers with half the labeled ingredients left out. Consider yourself lucky if you can actually taste the sugar, because it means the kids at the candy factory were well enough to lift those five-pound bags and add some to the vats that day.

* Sharknado stationery sets containing one 5H pencil, a stack of black Post-Its, and one envelope with the back flap missing.

* Sharknado: the Original Motion Picture Soundtrack. Side A of this special-edition audio cassette is the film’s original songs composed by The Brady Bunch‘s Robbie Rist; side B is all “Kidz Bop” versions of same, sung by a chorus of unruly seventh-graders in after-school detention.

* Sharknado cereal — Partially processed oat globs and two-inch-wide marshmallows. Nothing inside is specially shaped unless you add milk, pretend the resulting mess is clay, and mold it into a sculpture of Tara Reid’s head with your own two hands.

* Beats by Sharknado headphones. One ear doesn’t work, you have to keep jiggling the wire on the other ear at just the right angle, the cord is only eight inches long, and the pads are made of burlap.

* A remastered special edition of the 2009 Syfy Original Movie Mega Shark vs. Giant Octopus that bills it as a Sharknado prequel.

* Sharknado: the Video Game, an 8-bit incoherent mess from the makers of Atari’s E.T.: the Extra-Terrestrial.