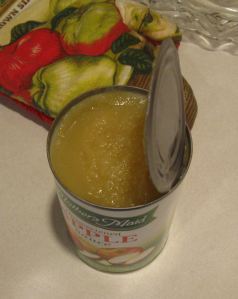 While plumbing the deepest, darkest regions of our pantry for quick supper ideas tonight, my wife discovered an ancient artifact not seen by mortals for uncountable years: a mysterious can of applesauce that expired April 7, 2011.

We don’t recognize the brand. Neither of us remembers buying it. I didn’t even know applesauce could be legally packaged in anything besides glass jars. If someone gifted it to us, their moot kindness was forgotten long ago.

For a moment I wondered if it was haunted — cursed, even. Maybe this applesauce belonged to the previous homeowner, who ran away from it screaming because it brought death and destruction to him and his loved ones, a sort of fruit-flavored monkey’s paw straight from the grocer’s clearance aisle.

I was also under the mistaken impression that scientific advances in food preservative technology meant that canned goods were viable for decades and were therefore exempt from expiry. Wait, no, check that: I thought most pantry goods were long-lived like that. I once visited a relative who wasn’t the best housekeeper, opened their pantry in search of something we needed for a project, and ran across a can of former foodstuffs that had somehow manifested a pinprick hole in one side and allowed most (not all) of its contents to evaporate over the course of what I’m fairly certain were years. From that example I should already be aware that canning isn’t a guaranteed path to immortality.

(…or is it? How stringent are food expiration dates? Are they calculated by certified food scientists to represent the exact moment at which the preservatives become inert and permit previously dormant contagions to awaken and replicate? Or are they arbitrary boundaries created by The MAN as a means of tricking unsuspecting consumers into throwing away stored food and buying new food much sooner than we really need to? The paranoiac theorist in me has to wonder.)

In the interest of science, and with flagrant disregard for personal safety, I opened the can to see what natural mutations might be festering within. I imagined all sorts of possible frights: intelligent penicillin colonies; stygian molds releasing explosive spores of death; maybe an entire hibernating ant colony; best-case scenario, a wormhole into another, creepier dimension.

As the photo already revealed, the contents were a viscous, reasonably applesauce-colored liquid. No seething acids, no sludgy morass, not even so much as a ghastly, roaring stench emerged from it. It didn’t look appetizing, but it wasn’t the chemical disaster I’d expected. All told, kind of a letdown. On the other hand, if I wake up tomorrow morning with lung disease induced by invisible evil applesauce spores, you loyal readers can rest assured you’ll be the first to know. (And then you can help me break the news to my wife.)

I know our pantry contains other, older ingredients that we rarely use but refuse to discard. I’m aware of one half-used bag of oat flour, a packet of onion soup mix, and a few ounces of wheat gluten that have seniority over most of the other pantry denizens. We’re usually not that negligent about cycling through our canned goods, though. I think we’re not, anyway. Frankly, I’m afraid to look further inside and see what other items are hiding in the back sections, growing old and unusable and possibly sentient.

And for anyone who’s still worried for me: no, I didn’t go so far as to taste the applesauce. Like a good husband who wasn’t in the mood to hear his wife’s admonitions, I emptied the applesauce into the sink, where it thankfully didn’t melt through the garbage disposal. It’s just as well. Room-temperature applesauce is gross.

Even if I’d had my wife’s permission to try it, I wouldn’t necessarily fear for my life. We keep plenty of medicine on hand…though an impromptu inventory tonight revealed that our newest aspirin bottle officially expired two days ago. Oops.