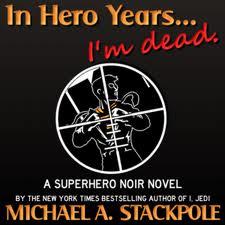 Fun trivia: I bought my very first ebook at GenCon 2012. When I accompanied my wife in the autograph line for Michael A. Stackpole, author of some of her favorite Star Wars Expanded Universe novels (several books in the Rogue Squadron series), I was surprised that one of the few items for sale at his table was a superhero novel called In Hero Years…I’m Dead. In lieu of hard copies, Stackpole had it available only on disk in ebook format. Undaunted by my complete lack of an eReader, I bought a copy anyway, for a few reasons:

1. I rarely buy much at GenCon because I’m not a gamer. The only vendors to extract profit from me were Stackpole and Oni Press, the only professional comics publisher on site.

2. I read the Rogue Squadron graphic novels Stackpole wrote for Dark Horse Comics once upon a time. Not bad, considering I read none of the novels and had no idea who most of the characters were. (Wedge, yes. The others, my wife had to explain to me.)

3. I’ve found the best way to spur myself into trying a new medium is to buy a work first, then worry about the device later. We owned our first DVD (The Phantom Menace) months before I bought my first DVD player. Likewise, the Blu-ray in my Up combo pack waited a good while before I could do anything with it. So there’s a precedent.

I’d like to read Stackpole’s novel at some point. As of this writing, though, I still have no eReader. I didn’t ask for one for Christmas. It wasn’t targeted on my Black Friday hunt. I’m not saving up for one. It’s not even on my wish list.

An eReader is a low priority for me as a direct result of one of my egregious first-world problems. Behold:

These stacks represent less than 50% of my current unread book pile. Both shelves (and half the shelf above, not pictured) are two rows deep with novels, graphic novels, how-to guides, coffee-table books, and other book-shaped objects that I’ve convinced myself I’ll read before I die (Lord willing), but for various reasons haven’t had their turn yet. Many of these books have had the misfortune of watching other books cut in line ahead of them. My insistence on devoting multiple months of 2012 to Neal Stephenson’s billion-page sorta-epic REAMDE didn’t help, to say nothing of my decision last year to begin dedicating hours per day to this newfangled blog thing.

Blame this shameful accumulation on any number of other factors as well:

* Gifts from well-meaning relatives.
* Great Amazon sales.
* Slightly less great Sci-Fi Book Club sales.
* Remnants from long-ago Goodwill 3-for-$1 binges.
* Works I bought at comic book conventions from independent writers and artists, as my way of encouraging them in their craft.
* Deeply discounted leftovers from when our local Borders locations all went out of business, one by one.
* A few longtime holdovers from my college years.
* Used books donated to me during a previous decade and belief system (by which I mean, my mom’s old, old horror paperbacks that continually rank super-low-priority).

I’d love to read more. I really would. Between my daily commitment to this site, the needs of my family, the chores of adulthood, the distractions of our fallen world, my Bible studies, my weekly comics fix, my uncool insistence on at least six hours’ sleep per night, that pesky full-time day job, and this darn Internet in general, book-reading gets short-shrifted more than any of my other hobbies and required activities. I do what I can, but my leisure time is finite. If I relinquish my writing talent and turn this site into a Tumblr-style repository for daily photos of our dog, I suppose that would free up some hours. I’ve no current plans to do that, but it’s good to know my options, no matter how not-tempting they are.

That’s why I’m reluctant to open my door any more widely into the world of ebooks. Though I’m struggling to fit the Stackpole novel into the reading order somehow, I’m otherwise in no hurry to extend my backlog into multiple dimensions. Far as I’m concerned, I shouldn’t be eying any new toys till I finish playing with the ones I already have.

Well, except maybe at this year’s C2E2 convention, which is less than three months away. Someone has to encourage those optimistic indie talents still working in the print medium, and I’m just the guy to overdo it.

1. The preceding essay was inspired by the WordPress.com Daily Post Weekly Writing Challenge, though the subject of my bookaholism had been nagging me before this opportunity arose.

2. The aforementioned Michael Stackpole novel can be purchased through his official site, where you can also read Chapter One for yourself before purchasing. Enjoy!