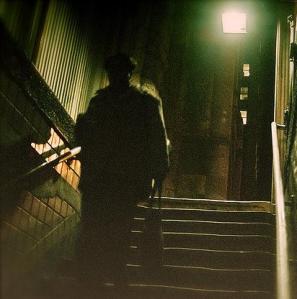 This mysterious stranger sees all, knows all, defies accountability, and is trusted by millions.

Today the Internet exploded with the news that J.J. Abrams would be directing the seventh installment in the recently unretired Star Wars series. Abrams fans rejoiced and are more excited about the next episode than ever. Movie fans grappled with the idea of one director dallying in both the Star Wars and Star Trek universes instead of choosing a side and sticking to it unconditionally. Abrams haters decided their world is ending and life no longer holds meaning. Members of all of the above circles rushed to be the first Internet user to crack a joke about lens flare. (Hundreds of millions lost that race.)

I found merit in the three theatrical releases that Abrams directed so far. (In order I’d rank Trek first, MI:III second, and Super 8 irksome but not terrible.) I bear him no ill will and wish his fourth film, Star Trek: Into Darkness starring man’s-man Benedict Cumberbatch and some other guys, were in theaters exactly now. I’ve seen all six Star Wars films several times apiece; follow the Clone Wars animated series; have partaken of several Dark Horse Comics SW projects; once read an entire Star Wars Expanded Universe novel; and am married to a wondrous woman whose encyclopedic knowledge of SW EU doesn’t frighten or alienate me. No matter who directs Episode VII: the Cash Cow Cavalry of Corellia, I expect to see it at least once.

All that being said: today’s announcement does nothing for me.

It’s not that I think Abrams and Star Wars go together like chocolate and ketchup. I’m simply patient enough to wait for official announcements from the studios themselves. I’m abnormal like that. If Variety, The Hollywood Reporter, or Entertainment Weekly (who frequently defer to the first two) are carrying the story, let me know. Otherwise, save it for the gullible or the rumor-mill addicts.

The scoop about Abrams and Episode VII was not an official announcement. As far as I can tell, this tidbit was fed exclusively to Sharon Waxman’s The Wrap and posted at 1:33 p.m. Thursday. Thirteen minutes later, Nikki Finke’s Deadline shared the news with its audience. From there word spread to all other news sites at all levels of credibility. Retracing the steps back to The Wrap’s original article, though, I was disappointed to discover that the source of this world-shattering business decision was “an individual with knowledge of the production”.

I realize journalists have the right to keep their sources anonymous, to protect their identities for fear of retribution or litigation. I take that seriously when we’re talking about a major Mafioso trial, a matter of national security, or a corporate whistleblower who would appreciate not being obliterated by Big One-Percent. That’s totally understandable.

If we’re talking about movies, you’ve lost my attention. Remember the days when anyone could make up their own movie news and pass it off as gospel, before anyone cared about minor character attributes such as veracity, accountability, honor, or any of the simpler Commandments? I haven’t. I remember a time when the illegitimate sons of Ain’t It Cool News were more than happy to take the word of random people and run it as gospel truth in extra-large headline fonts. Nine times out of ten, the unsuspecting public bought it. After all, liars don’t write headlines or know HTML, do they? Then it must be true!

Not within my realm of interests anymore. Fool me once, shame on you. Try fooling me seven thousand times, shame on you times seven thousand, not on me. Anytime Tom Cruise or Steven Spielberg are “in talks” to work on twelve different new projects, whenever someone gets an itch for a He-Man reboot, as super-hero productions whittle down their lengthy directorial wishlist, each time someone swears Ghostbusters III is a pinky-sworn done deal, I tune out.

I’m not interested in who’s “in talks” for a film. I don’t need to know someone is “circling” a project. I don’t have time to waste on interviews with “sources close to the production who spoke on condition of anonymity.” If your story leads with “We hear”, “It’s our understanding”, “Rumor has it”, or “Tiny-non-famous-amateur-news.com is reporting”, please feel free to keep captivating the masses of fans who drive your ad revenue and thrive on hearing every such prediction, even if only 20% of it ever comes true. I’m no longer mesmerized or even amused by the conjecture or fanfic of an alleged shadowy know-it-all calling himself Geek Throat or whatever.

When it comes to my moviemaking news, I’m all about promises set in stone. Once the contracts are drawn up, the talent is locked in, the project is greenlit, filming is a go, and there’s no turning back unless it’s another cursed Terry Gilliam set, then and only then am I all ears. Hypothetical what-if dream-news bores me.

If Disney, Lucasfilm, or Abrams himself confirm today’s news shortly by an official press release (preferably accompanied by a certificate of authenticity) testifying that Abrams is legally and irrevocably The Man for the Job, then hey, awesome. At that moment in time, I plan to be excited if it happens. Congrats to the rumor sites who cracked the veil of security and prematurely spread the word for the sake of street cred and site traffic. You’ll note I didn’t call anyone specific a liar or a madman, but I’d rather hear confirmation from the horse’s mouth than buy in and get punk’d again after the fact when it’s revealed as Internet hoax number eighty-trillion-and-five.

Besides, an individual with knowledge of the production told me Star Wars Episode VII: Being a Scholarly Contemplation on the Ways and Means of the Interstellar Deities Who Created the Force will actually be the directorial debut of acclaimed fantasy author Neil Gaiman. Remember, you heard it here first. Don’t bother trying to disprove it, or else you’ll destroy the magic of the Internet for everyone.