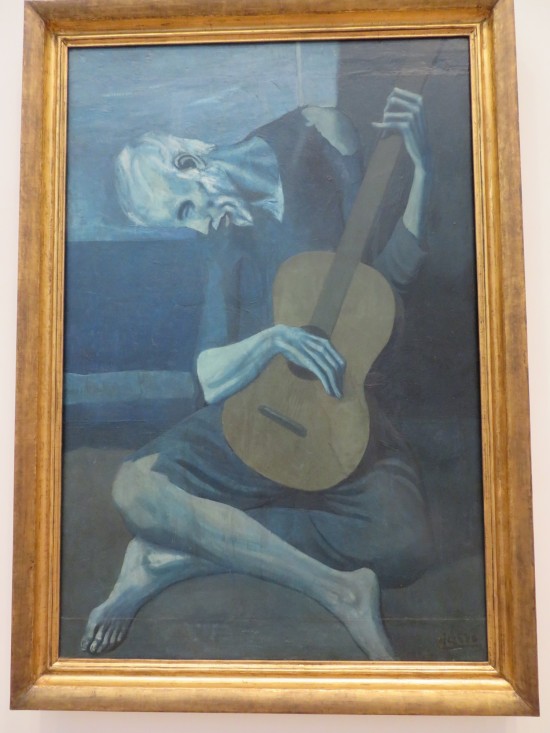 Before he turned to Cubism, Picasso’s Blue Period yielded works such as 1903’s The Old Guitarist, a sympathetic ode to society’s poor and disenfranchised. The longer you stare at it, the more details it reveals.

Previously on Midlife Crisis Crossover: as part of my 47th birthday celebration, my wife Anne and I drove from Indianapolis up to the Art Institute of Chicago and spent four hours with our eyes wide, jaws dropped, senses activated for deciphering strange shapes and arrangements, and cameras and phones at the ready. We barely saw half the museum and will have to return someday for more.

We concluded our day’s tour on the third floor of the modern wing, labeled “International Modern Art” on their handy map. Though “international” here largely meant “Western European”, we were well beyond the purely representational and into the not-so-straightforward movements and anti-movements of the early 20th century. Much of the collection was the sort that evinces cries of “I don’t get it” or “My kid could paint that” or “You call this art?” from the kind of observers who never list art museums on their vacation itineraries.

Whenever those same non-fans reach for a big name to use as a punchline to mock what they don’t dig, one of the commonest go-to talents is good ol’ Pablo Picasso. Chicago has quite a few of his works composed at varying levels of meaning and times of his life. When I sorted our modern-wing photos into piles according to historical movements, Picasso appears to be the only Cubist who caught our eyes and/or resides in those particular galleries. (We found one artist who apparently dabbled in Cubism later in his career, but not at the time of his paintings we saw here. That means he gets to wait till the next chapter.)

Among the other movements we paid attention to, the highest hit-count fell to the Surrealists — Salvador Dali and his amazing, stubbornly non-conformist peers and aesthetic descendants. As Pablo and those dreamers shared space in the museum, so do they share a gallery here.

(Fair warning: a few of these are vivid reminders that not all old-school paintings are aimed at all ages. Patron discretion is advised.)