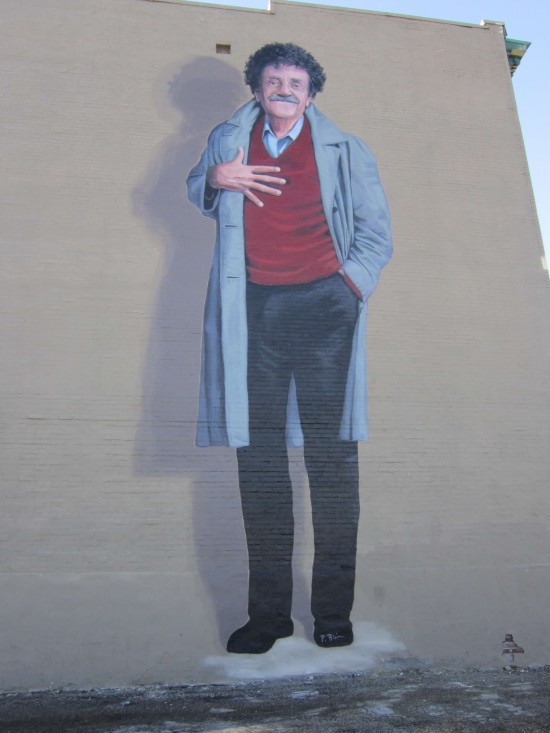 “My Affair with Kurt Vonnegut” by Pam Bliss, one of the city’s fan-favorite murals, stands along trendy Massachusetts Ave.

Once upon a time, and exactly once, Indianapolis hosted a Super Bowl. Back in 2012 our li’l city earned its first chance to host the big game. Thanks to tremendous teamwork among numerous organization and bodies cooperating under Mayor Greg Ballard, the Circle City welcomed untold thousands of visitors for a super-sized weekend of football mania, Hoosier tourism, and limited-time-only activities that welcomed all brought our downtown alive. It was a unique occasion that everyone in town could appreciate, including those of us who aren’t into sports, have never watched an entire football game — nary a Super Bowl, not even for the ads — and have never been invited to a Super Bowl party. We found ways to get into the spirit of the proceedings anyway.

All of this happened three months before Midlife Crisis Crossover launched. At the time I simply shared pics and stories with online friends, then reused a tiny selection of that material here on MCC one year later. I can’t remember why I was so stingy and only reposted eleven photos from among the dozens of relevant ones, including an entire quest involving citywide art. This past week our local media outlets have been holding their tenth-anniversary celebrations of that time we all did a Super Bowl together. That means it’s the perfect time for a remastered version of the tale of how we spent January 27-28, 2012, the weekend before Super Bowl 46…this time in trilogy form!

Regarding the aforementioned art quest:

Our fair city went to exquisite lengths to gussy itself up for visitors. To prove there’s more to us than just corn, sports, and culture-war slap-fights in Indiana, the Indy Arts Council kicked off an initiative to raise our artistic profile by bringing in artists, many of them locals, to paint murals all over town in the months leading up to Super Bowl Sunday — 46 such murals in all, because tie-in. The plan was to keep all 46 in place for a full ten years for quality-of-life purposes long after our out-of-town guests left. A recent check of the ol’ calendar has confirmed their decade is up. The Council is now seeking public input as to which murals should stay or go. For some of those works, it’s already too late.

On Saturday the 28th of that fruitful installation year, Anne and I set out to photograph as many of those larger-than-life expressions as we could until our time and energy ran out. Several of these were along the downtown Canal Walk; quite a few more were less than a mile out. Road closures for Super Bowl traffic foiled our efforts to reach other pieces in the vicinity. Some neighborhoods were farther away than we had time to include; others were the kinds of places where outsiders should not come to a complete stop. In all we captured roughly 22 of the 46 to varying degrees of clarity. (I’ll explain the “roughly”.) 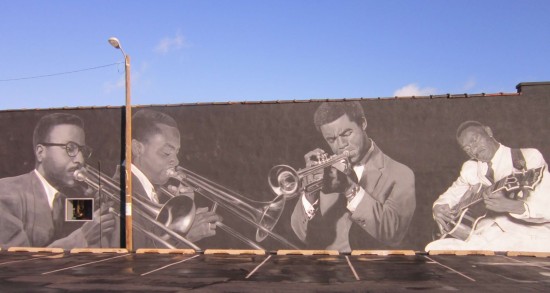 Another one from Pamela Bliss, “Indiana Avenue Jazz Masters” is on the side of a music store. Their windows were destroyed in the 2020 riotin, but the mural was untouched.

Detail from “Return to Innocence” on the far right side. 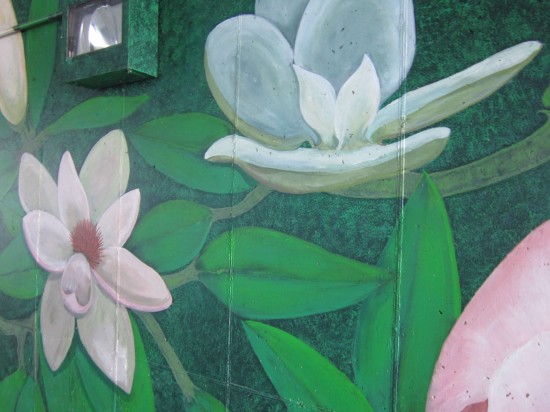 Hector Duarte, “Quetzalcoatl Returns to Look in the Mirror”.

Zooming in on some of Quetzalcoatl’s brush strokes.

One of four “Love Letter Indiana” closeups, starting at far left with probably one of the four winds of myth.

Continuing to the right, a swing kid and a giant tomato.

Swing Kid’s next door neighbor is the secret love child of Hedwig and the Phoenix. 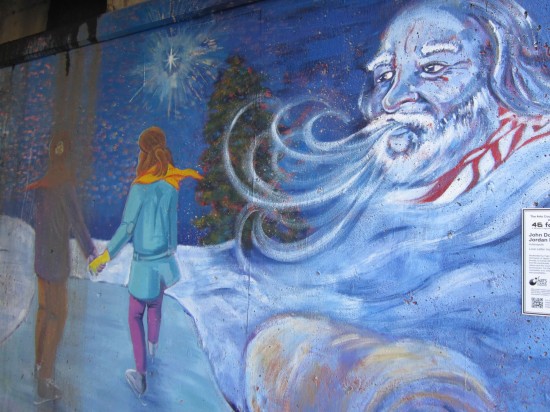 At the far right end, , Old Man Winter and a human friend look toward the North Star. 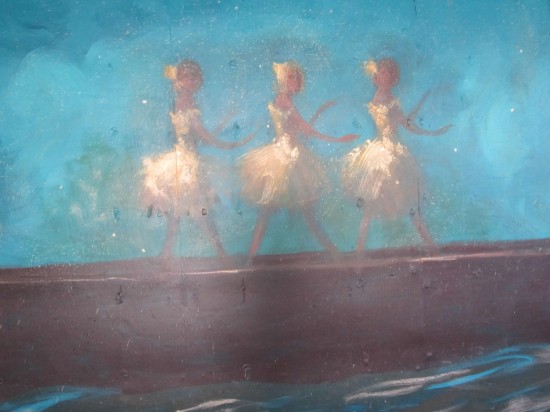 A detail from Kyle Ragsdale’s “Hoosier Hospitality on the Boatload of Knowledge”, which apparently neither of us caught in full.

My apologies in advance for the next three, which are not great shots but I hate to break up the set. A lot of these murals are hard to find online in any high-end quality and are nearly always unlabeled. I highly recommend seeking them elsewhere if you think you can. 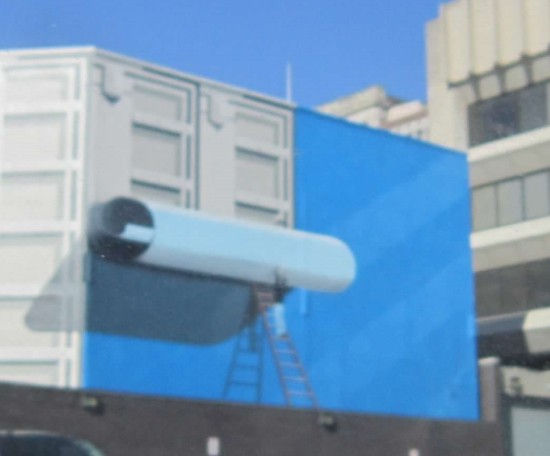 Michael Cooper, “Indy’s Always on a Roll”, spotted while driving.

We saw Erik Pearson,’s “Pennway” through a Pennsylvania Avenue building in a part of downtown where stopping would’ve cost extra. 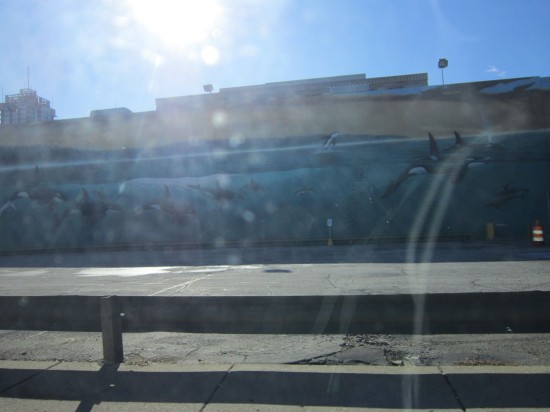 If you like whales, you might love Robert Wyland’s “Orcas Passage” in a part of downtown we never frequent. This one was the subject of no small controversy because it was painted over a previous long-standing mural.

We come now to the “In Memoriam” section, our slow-motion tribute to those murals that are no longer with us, including my absolute favorite of all the ones we saw. We here at MCC mourn their loss and recommend you finish reading the entry to the accompaniment of your least favorite Sarah McLachlan song.

Will Schlough’s “Jacks”, on a vacant commercial building on Meridian Street that was demolished in 2015 to make way for new apartments. 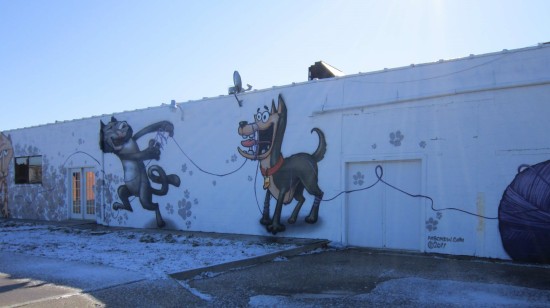 “Furry Animal Buddies”, by an art team who called themselves FAB Crew, adorned the Indianapolis Humane Society’s HQ in the Haughville neighborhood. These cute critters were at some point “damaged” and replaced.

…so I don’t even know how many of those five murals are excerpted in these six shots, which is why I said we got “roughly” 22 of the 46…

…all of which is now moot because the 65/70 North Split bridges and the “Trivergence” series have been torn down while the city reworks and rebuilds both interstates in new shapes, in a project that began in 2021 and feels like it’ll last until roughly the year 2525.

Another piece from Eduardo Mendieta, “On the Map” was on Main Street in Speedway, home of the Indy 500. This was my favorite of all the XLVI murals, on the side of what became the home of the Speedway Centre for the Arts in 2014… 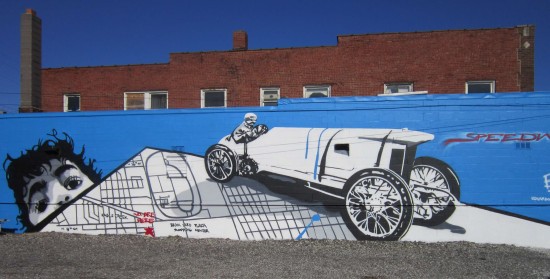 …up until they moved out and it was demolished in December 2018. In 2021 ground was broken on a new development that will include upscale apartments, penthouse condos, and a wine store, which I’m sure will come in handy and much more favored the next time we host the Super Bowl, whenever that might be.