Giant inflatable football poised over a small-scale simulated football field. Neither was in use but could’ve made a fun combination.

Once upon a time, and exactly once, Indianapolis hosted a Super Bowl. Back in 2012 our li’l city earned its first chance to host the big game. Thanks to tremendous teamwork among numerous organization and bodies cooperating under Mayor Greg Ballard, the Circle City welcomed untold thousands of visitors for a super-sized weekend of football mania, Hoosier tourism, and limited-time-only activities that welcomed all brought our downtown alive. It was a unique occasion that everyone in town could appreciate, including those of us who aren’t into sports, have never watched an entire football game — nary a Super Bowl, not even for the ads — and have never been invited to a Super Bowl party. We found ways to get into the spirit of the proceedings anyway.

All of this happened three months before Midlife Crisis Crossover launched. At the time I simply shared pics and stories with online friends, then reused a tiny selection of that material here on MCC one year later. I can’t remember why I was so stingy and only reposted eleven photos from among the dozens of relevant ones, including an entire quest involving citywide art. This past week our local media outlets have been holding their tenth-anniversary celebrations of that time we all did a Super Bowl together. That means it’s the perfect time for a remastered version of the tale of how we spent January 27-28, 2012, the weekend before Super Bowl 46…this time in trilogy form!

My wife Anne and I just so happened to have lived in Indianapolis all our lives, but we’d had no plans to participate in the big event any more than we usually would for other games. In fact, every year on Super Bowl Sunday our family goes out to a nice dinner because it’s always one of those days where every restaurant without a large TV is guaranteed to be deserted. As it happened, my employers were one of several local companies instrumental in providing resources to make this major tourism boon a reality for Indy. The company received a thank-you gift of a few dozen free tickets (normally a $25 face value) to the NFL Experience, for all intents and purposes a football convention to be held at our newly expanded Indiana Convention Center during the nine days leading up to the Super Bowl. I presume our officers called first dibs on some of those tickets. The remaining 33 were passed on to “top contributors”, which included me. I appreciated the compliment, even if my appreciation of sports falls short of what the other 99.99% of the American population holds.

It seemed a shame to waste the ticket, which was non-transferable. To sweeten the deal, HR permitted us to leave work two hours early on Friday the 27th to attend as a sort of “private event” perk. It was hard to turn down the promise of “private party”-level benefits and the chance to cut a Friday shift short, so I made the most of it. Unfortunately I was only given one ticket, and wasn’t told who else in the entire company is a “top contributor”. I had to go it alone — no coworkers, and no Anne at my side. That part sucked. Being alone in a crowd is rarely my idea of a good time, whether it’s a concert, a church service, a packed theater, or a non-comic-con.

To distract from the loneliness and indulge my habit of recording my experiences in case of future memory loss, I took photos along the way through the exhibits, memorabilia, activities and decor inside the NFL Experience. Keep in mind, my football knowledge is shallower than fake turf. Some mislabeling and/or ignorance may have occurred. 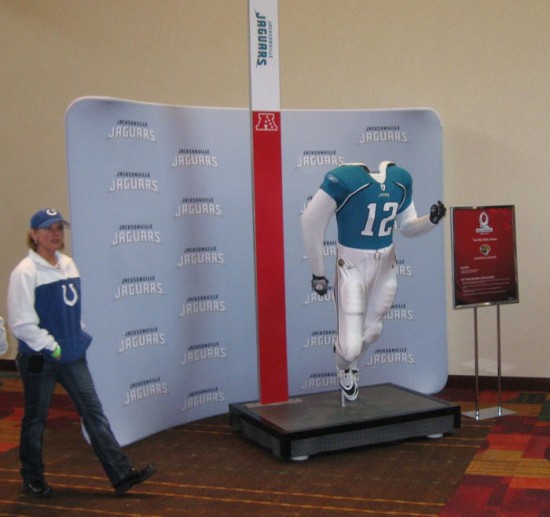 First exhibit inside: sample NFL uniforms. I snapped a Jacksonville Jaguar suit in honor of a friend in Florida who’d been the first to encourage me on Facebook to go all-in on the Experience. Also, its lovely teal color and its fair lack of people crowding it and blocking my shot. 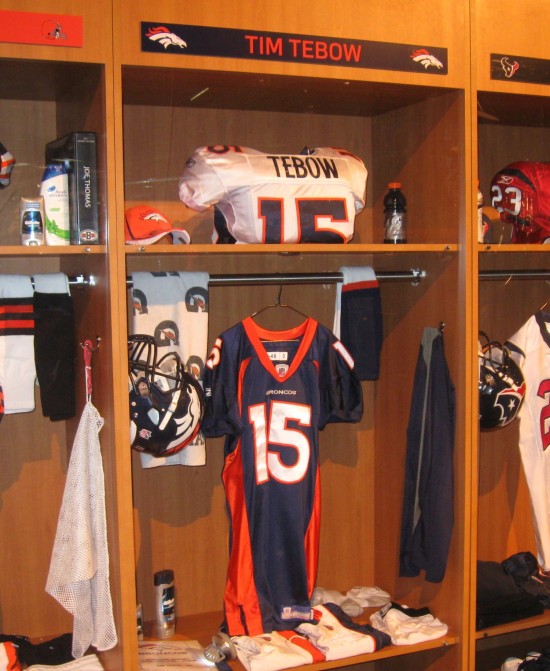 Taken for that same friend: this salute to Tim Tebow, whom he super-loved. Years later he unfriended me. I don’t know when or why. But Tim Tebow’s property remains.

A row of shiny monoliths chart the history of the game from start to finish, including that one (1) time the Colts won the Super Bowl after absconding from Baltimore to Indy.

Skill challenges let fans feel the adrenaline rush, strongman accomplishment, and toxic sweat of a real workout to be had in committing real football activities and earning proof of manhood. I tried none of those. I know my limitations.

Scientific simulation of what throwing the ol’ pigskin for a living can do for your biceps. (Why are their guns bigger than yours? Genetics!)

Trained craftsmen demonstrated how to make a real football. He skipped the steps for skinning the cow and cleaning its hide. 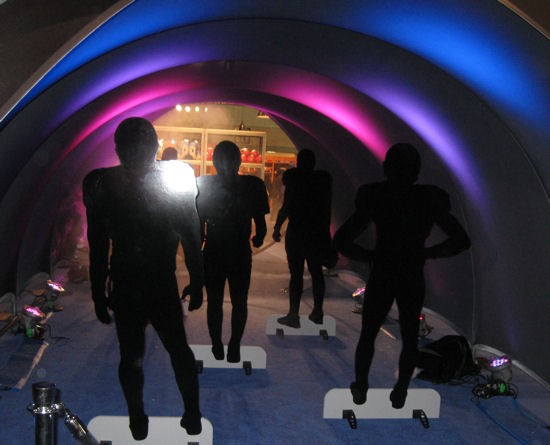 Simulation of an actual locker room exit onto a field. Feel the boldness of walking dramatically in other guys’ shadows.

Vitrines displaying old-time uniforms included this tribute to Bronko Nagurski from the 1930s Chicago Bears. His name can beat up my name. 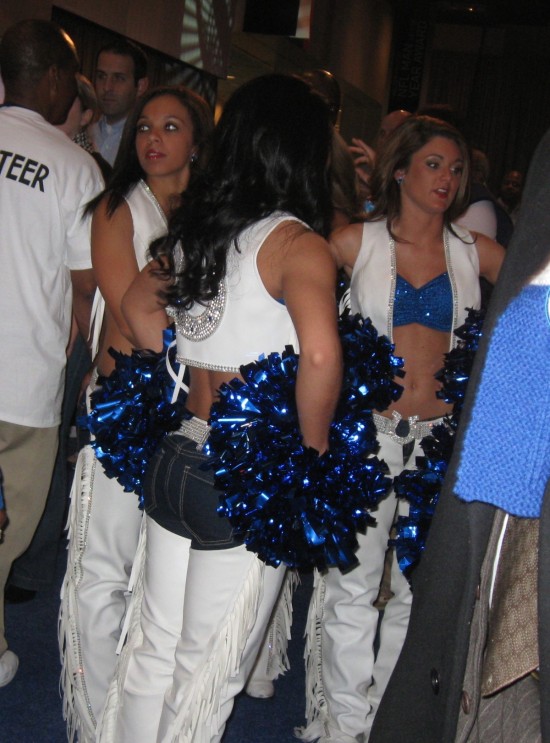 On break from walking and walking, I found a table and nursed a soft drink alone. Moments later, the Colts cheerleaders filled up the area to hang out before their next stage performance.

The Cheerleaders danced and sang a country song about drinking, partying, and “getting some”. Possibly a cover of a Super Bowl commercial.

Trying to take distant photos across a dark room of objects in motion with a mid-2000s digital camera resulted in zombie cheerleaders singing about BRAINS. 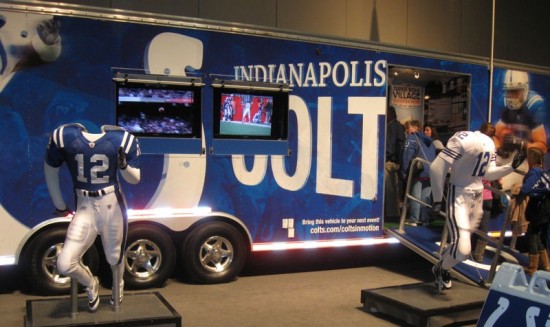 A trailer provided in-depth insight into the memorabilia and history of our Colts, who ended that season 2-14 because quarterback and future SNL champion Peyton Manning spent the entire year injured.

Closer to my speed was the kiddie section, where it was Adventure Time! Not that I actually did anything here, either. It was all digitized sports-related fare, including possibly a cartoon sports MMO.

Pepsi Max Bot was the most dynamic of the sponsors’ booth mascots. Its reps gave me several samples of Pepsi Max that helped me forget all the blocks’ worth of walking I’d done up to this point. 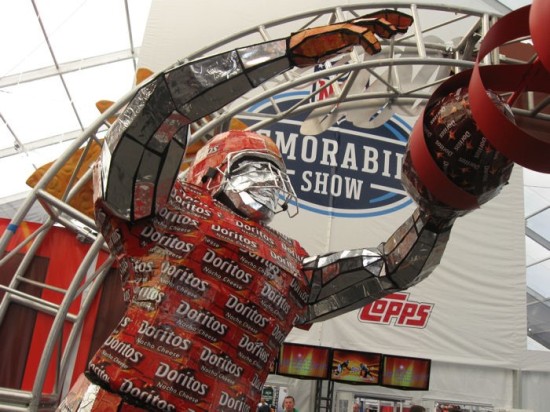 Several Colts players — mostly present, a few past, some from the practice squad — were on hand to sign autographs. Squint and you just might see the scalp of future restaurateur Gary Brackett.

Our local NBC affiliate hired someone to dress like an NBC peacock, because kids love Rainbow Big Bird with a thousand-yard stare.

The least attended exhibit in the entire Convention Center charted the evolution of the NFL corporate logo. Who among this fandom doesn’t love giant corporations?

In absentia Anne asked only one favor of me: she thought a photo of the Vince Lombardi trophy might be cool after its scheduled unveiling. The showrunners announced the ceremony would start at 2:45, but kept all other details shrouded in secrecy. The proceedings had no speeches, no instructions, no visible rituals, just a local high school band marching through the restless crowd. When the band stopped playing, everyone around me somehow just knew it was time to glom together into a long, vaguely line-shaped mass for their own personal imprisonment. The volunteers monitoring the front of the serpentine estimated a 45-minute wait. I took a shot from my place in line and moved on. 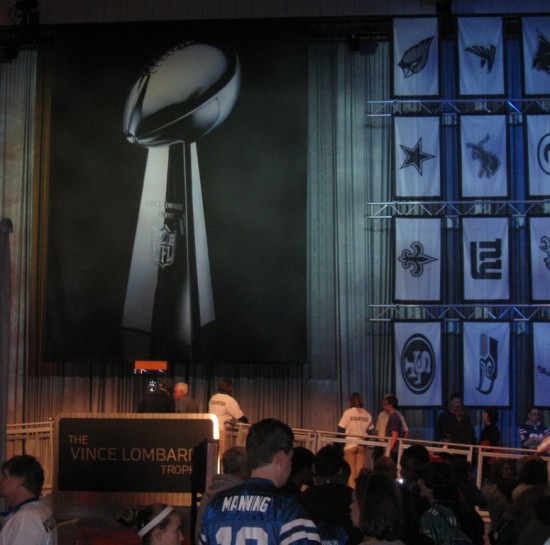 I’ve waited longer for less, but wasn’t in the mood to do so for the sake of sports.

In lieu of the Vince Lombardi Trophy, I hoped Anne would accept this photo of the Lamar Hunt Trophy, whatever it or he were.