A fond souvenir from our personal archives.

Fans grieved hard enough years ago when Chewbacca died in the Star Wars Expanded Universe, crushed by a moon. Hearing today of the death of Peter Mayhew, the man who brought George Lucas’ original Wookiee to life, was far more sorrowing. Everybody loves Chewbacca. Not even The Star Wars Holiday Special could damage him or our appreciation for the heart and muscle and loyalty he brought to the other, much shorter heroes of that faraway galaxy.

Anne and I had the chance to meet Mayhew at Star Wars Celebration 2002, somehow catching him in a very rare moment without a long line of appreciative fans in front of him, all wanting to express their affection. It’s possible we might have caught him just as he was about to take a break or participate in a panel, but nothing about his response indicated impatience, disturbance, inconvenience, or anything but grace. 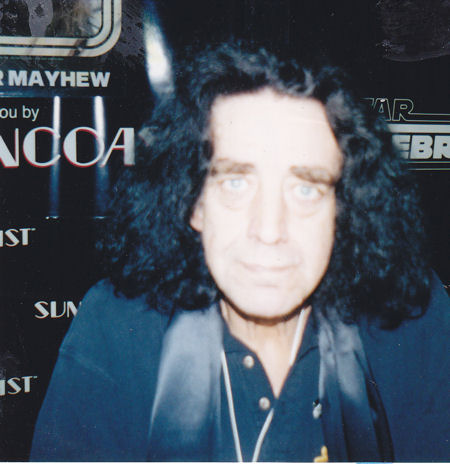 Portrait of the artist as a young lad of 57, immortalized on 35mm film before we went digital and stopped using flashes forever.

He was a guest at other cons near us intermittently, often appearing from the distance like a less wispy Joey Ramone and never lacking for company. His final convention appearance was at last month’s Star Wars Celebration Chicago, but some of his schedule had been trimmed due to medical issues. We had no idea of their severity, and were shocked to hear today’s negative update.

All things considered, it was extremely cool that he had the chance to embody the part one last time in The Force Awakens. (And at age 69 when the film was released, at that. We should all be so lucky to still be doing what we love at that age.) As always, Chewbacca was the stalwart partner sticking by his best friend’s side even decades later through thick and thin and infinitely troublesome. When that same best friend dies before his eyes, his fearsome outburst of vengeful rage and sorrow were our rage and sorrow. Though we may not have spoken his language, in that moment he spoke for us.

We feel a different shock today for the loss of that warrior and gentleman, and we pray he rests in peace.

Peter Mayhew when we passed near his booth at Wizard World Chicago 2011. Dunno who the fan is, but I hope he’s doing okay today.