Our grand finale awaited us in the town of Fairmount. Yet another Indiana town that dates back to the mid-1800s and once prospered from the Trenton Gas Field around the turn of the 20th century, Fairmount today is largely a commuter town, a popular living space for folks working elsewhere nearby. Garfield creator Jim Davis was raised there and still lives and works not too far away.

Some in Fairmount might argue Davis isn’t their most famous son. After we completed our Garfield collection, a few feet to our right was another familiar face waiting to welcome us to town.

You might remember him from such films as East of — wait, we already did that joke. 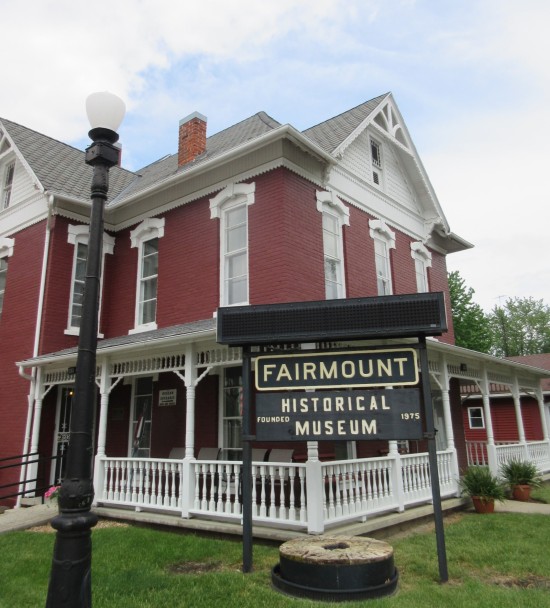 The former J.W. Patterson House, listed on the National Register of Historic Places, today serves as the Fairmount Historical Museum. We’d been cutting corners on previous stops throughout the day to give us better odds of arriving before closing time. As it turned out, they closed an hour later than I thought. Also, we wanted to arrive early in case their Garfield was kept inside and inaccessible after the doors were locked. Nope, Garfield stood outside on the porch, a free sight to any passersby. Ultimately there had been no need to hurry for the sake of the museum itself. Who knew.

But we were here. The museum was here. We had a little energy left. They had a couple hours left. We paid our fares and checked them out. Their biggest exhibition spotlight is reserved for hometown boy James Dean, who attended their high school before going on to costar in three major films and a handful of TV and radio credits, only to die unfairly in a 1955 car crash at age 24. Several people hung out in the museum throughout our visit, sharing their detailed knowledge of, and intense fandom for, the esteemed Mr. Dean.

We had to be honest and admit up front that we hadn’t seen any of his films yet, unless we can count the “YOU’RE TEARING ME APART!” clip that’s been featured in so many Academy Awards montages that it should be allowed to host the show next year instead of Jimmy Kimmel. They accepted this confession, didn’t judge us, and were more than happy to share what they knew and answer any questions about James Dean and James Dean accessories.

Commemorative bust by artist Kenneth Kendall, who later used it as the basis for a more prominent one that stands at Griffith Observatory in Los Angeles.

A work-in-progress bust of Dean by Dean, unfinished at the time of his death. Several display cases contain artworks by Dean, all the way back to childhood. 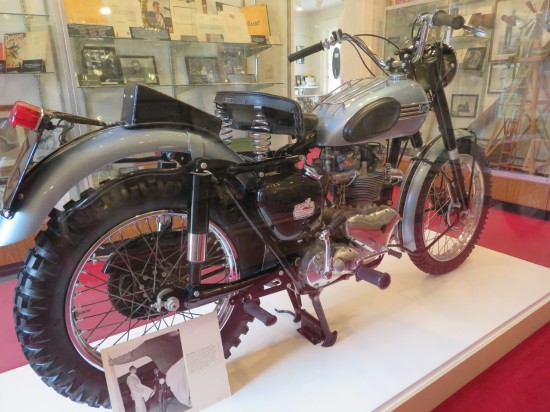 An extremely gracious gentleman told me all about Dean’s motorcycle, which he’s had the privilege to touch.

Before his fashion choices inspired millions, sometimes at a teen he had to wear team uniforms like this.

Much better: his costume from Giant. 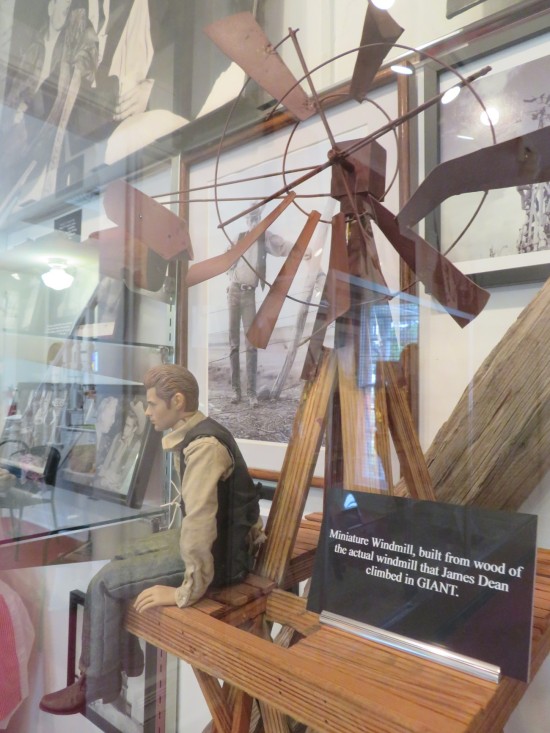 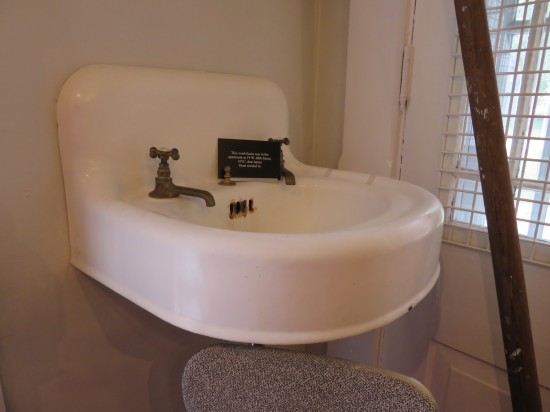 The actual sink from his NYC apartment.

Rebel Without a Cause script signed by several cast members including Natalie Wood, Jim Backus, and Dennis Hopper.

Dean never won an Academy Award, but was given one under the table by sources unknown. He later regifted it to Robert Hinkle, his dialogue coach on Giant.

The terrible, horrible news of the day.

But this was the Fairmount Historical Museum, not the James Dean Museum. Upstairs spaces were dedicated to close personal history of the town itself. We’ve seen similar sights in our previous travels. 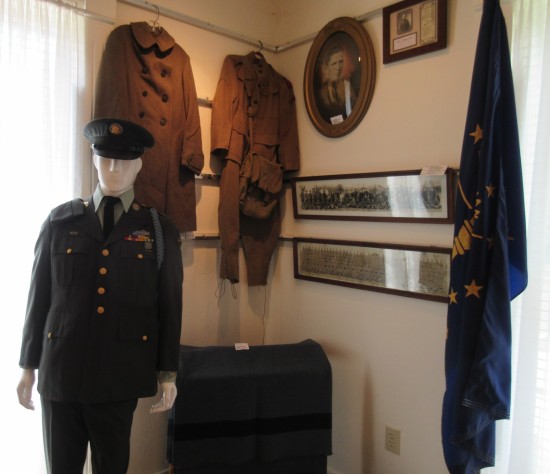 A look back at school bells of yesteryear, admittedly not an exhibit we’ve seen before.

Fitting in with our trip theme, naturally the museum devotes a room to our man Jim Davis. 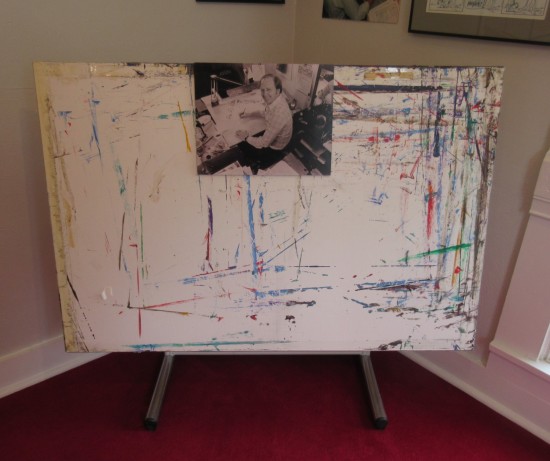 Davis’ own drawing board, back in the days before he had an entire company handling his creation. 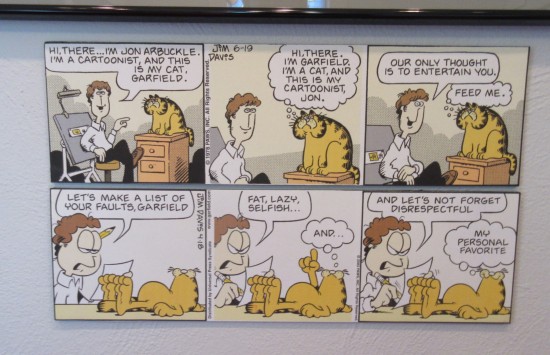 The first Garfield strip from June 19, 1978 (which celebrated its 40th birthday this year), compared to a strip from 2002, showing how the strip’s style has evolved under the various artistic hands at Paws Inc. 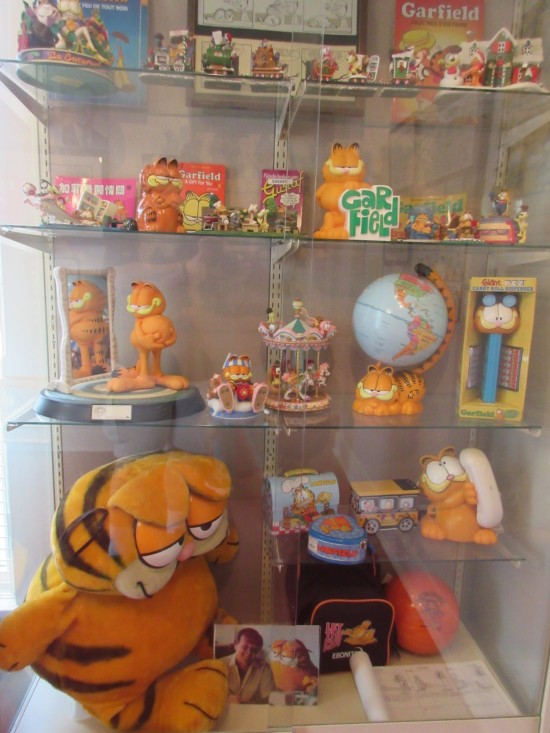 A fraction of the Garfield merchandise that was available in stores when we were kids. Once upon a time, he was everywhere. 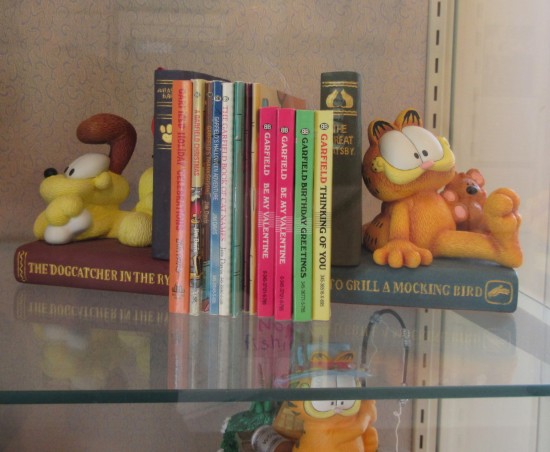 They’re not pictured between these bookends, but the original Garfield books were one of the first American comic strip collections to reprint every single strip in chronological order, from the beginning, and without skipping a single day. For aficionados of any comic strip, this was a pitifully rare achievement before 1990.

We made a point of perusing the gift shop. Leaving without adding at least one James Dean film to my library would’ve been criminal, or at least pretty rude. They had no Blu-rays for sale, but I was fine with picking up Giant on DVD. I’d previously read about director George Stevens in Mark Harris’ Five Came Back and have been curious ever since to see some of his post-WWII dramas, which I understand are a radical departure from his prewar comedies. We continued chatting with the staff and other friendly townspeople while they figured out how to work the credit card machine and waited for the 56K modem to do its job. More nostalgia atop nostalgia.

The gent who gave me the lowdown on James Dean’s motorcycle also gave us directions to Dean’s grave at the local cemetery. It was mildly tempting, but the exhaustion of the long day’s drive was catching up with us at last, and our appetites were finally returning. Next time we’re up that way on I-69 North, it might make a nice stopover. We’ll also have that twelfth M.I.A. Garfield in Van Buren to track down at some point, too.

(Fun trivia: if you’re interested in seeing Dean’s grave and more of Fairmount circa thirty years ago, the music video for Morrissey’s “Suedehead” was filmed mostly in Fairmount. Not only is the song itself a love letter of sorts to Dean, much of the video features Morrissey himself walking around town and indulging his own James Dean fandom. A few Indiana Easter eggs sneak into the frames as well.)

We said farewell to the museum, enjoyed the satisfaction of a side quest completed to the best of our abilities, and rejoined I-69 to head home to Indianapolis. Not even five miles later, traffic came to a complete standstill for several overlong minutes, then crawled along at a tricycle’s pace for over an hour. We were too far from any exits that might have made useful escape hatches. We were beyond the range of Fairmount’s surprisingly strong Wi-Fi coverage, which meant our phones were helpless to tell us what was going on.

This is what tends to happen to folks who dare use I-69, the worst interstate in Indiana. This is why I hate I-69 like Garfield hates Mondays.

…and then we eventually got home hours later than hoped, but before either of us had to turn cannibal. For those scoring at home, that’s eleven Garfields total, and that’s a wrap on this special MCC six-parter.

Thanks for reading! Lord willing, see you next birthday.