Portrait of a guy who won’t stop posting Badlands photos. Because he can. It’s either this or take on politics head-on. I’d rather jump down one of those canyons.

I said in our last chapter that I would probably save our remaining Badlands photos for the eventual outtakes section at the end of the miniseries. Ten minutes after clicking the “Publish” button, I wondered to myself: why wait? Let’s go wild with ’em!

See, this is the kind of arbitrary about-face that a writer can pull when his moods swing and he doesn’t have enough readers to question his choices or hold him accountable for his promises. I’m a loner, Dottie. A rebel.

Here at the junction where plains meets pits, the contrast between stone and grass naturally represents the Duality of Man. 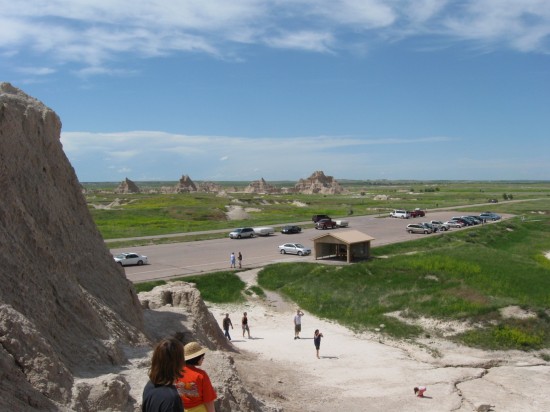 At Badlands National Park, they paved only small portions of paradise and put up parking lots. 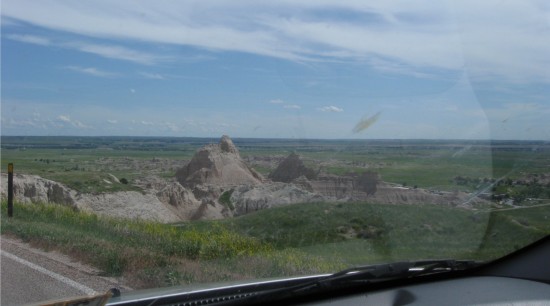 Badlands viewed through South Dakotan bug guts on our windshield. By the time we completed this 2500-mile 9-day journey our rental car was trashed on the outside, coated with the remnants of countless slaughtered insects.

The negative humidity isn’t conducive to Badlands forests, but a handful of copses find a way.

So. Them Badlands, am I right.

That’s me sharing ALL THE BADLANDS.

That name again: Badlands! Be sure to Badlands wherever you shop, work, or bank.

For those just joining us: Badlands. Because some readers appreciate a thorough recap.

Badlands: they’re not what’s for dinner. Badlands: because you deserve a break today. Badlands: Think Different. Have You Driven a Badlands Lately?

Honestly, sharing these is far more fun than that Pacific Rim: Uprising review I’m still procrastinating. How am I supposed to upconvert “Ehhhhhhhh” into a 1000-word fun essay?

Coincidentally, “Ehhhhhhh” was also my opinion of Samantha Bee before this week. Little has changed. except headlines gave me a couple more words to add to my Twitter “Mute” filter. Not sure I can milk all that for 1000 words, either.

Don’t get me wrong: I support free speech more than I do a lot of other Amendments. But that doesn’t mean I have to listen to all the free speech. Consumer choice and discerning readership are all part of my curation process for triaging my mass-media free time. 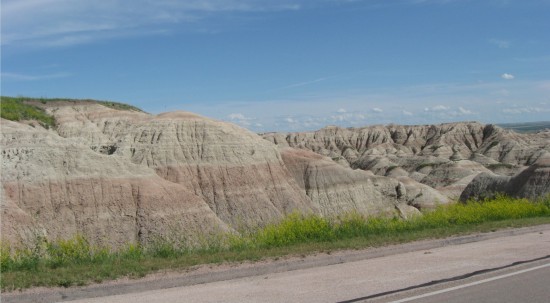 Frankly, it helps my emotional health to avoid some of those debates. If I thought other internet users were interested in true communication, meaningful dialog, and changing minds through actual logical persuasion, maybe I’d be entrenched more deeply in that fray . But no one’s out there trying to change minds for real. It’s all about the visceral satisfaction of punching the faces of the other side, then basking in the approval of their own side. Until they misuse a single word, inflame their own side, and get themselves devoured alive by instantly former allies for their fleeting misstep. That isn’t change. That isn’t activism. That isn’t a better world.

Because you see, we’re discovering in modern online communities and social media in general the deep, dark, awful, terrible, no-good truth about 21st century life: the real Badlands were the friends we made along the way.

It took a dozen or so miles before the breathtaking awe of the Lord’s beautiful design finally became a little tiresome. The park exit was another dozen miles beyond that point. We stopped hither and yon for a few more differently hypnotic sights before crossing the park border at last and heading toward the town of Wall.