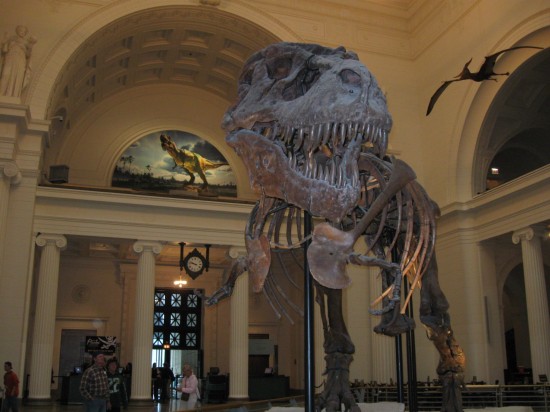 Sue the T-rex, like a rock star in the dinosaur fossil world, had a replica residing at our own Children’s Museum in Indianapolis for a while before we met the real thing in ’09.

Dinosaurs! Every kid loves dinosaurs! The one we brought with us was a teenager, but still.

Also in this episode: mummies!

Too bad we couldn’t really present you with a big crossover event featuring dinosaurs fighting mummies. Sadly, today’s museums have their limitations. Perhaps someday the technology and permissiveness will be there.

The hotel restaurant had rewarded us with free coupons for their breakfast buffet, but their employees weren’t motivated enough to open in time for us to eat in style and make our scheduled meet-up time with our intrepid Chicago guide Mindy. Instead, in the interest of revisiting old corporate ties, we ate at a flagship McDonald’s down the street from our hotel, located a few miles from the McD’s corporate HQ in Oak Brook, the next suburb over. It wasn’t serving simulated bistro cuisine like the world’s largest McD’s did for us in Orlando in ’07, but they tried to be special in their own way. 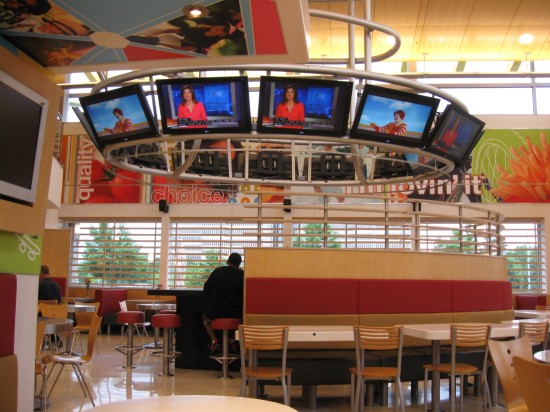 We returned to Riverside, met up with Mindy, and took the train downtown again because driving would’ve been next to impossible. Multiple streets were closed to accommodate a massive blues festival that afternoon and in preparation for a Kenny Chesney concert later that evening. Fortunately for us, Chicago is the kind of major city where, if one mode of transportation is stricken down, two more take its place. This is when Mindy introduced the three of us to a startling new concept: taxicabs.

Understand: we have taxis in Indianapolis, but no one uses them except airport tourists and 3 a.m. drunkards. Back home in Indy you have to call the cab company and ask them to send one directly to you. We have no such thing as “hailing” a cab unless we’re talking literal meteorological hailstorms. It’s cheaper and more practical to rent a car, or just depend on the hospitality of your local contacts. Chicago, on the other hand, is one of those real cities As Seen On TV. They don’t have nearly enough parking for all their tourists to clog up the place with extra cars, so their infrastructure has progressed to the point where you can actually hail a cab. And they stop. And they take you where you ask, though sometimes with an added detour just for the ambiance.

Even on a rainy, early Saturday morning, Mindy found us a cab and helpfully added a new experience to our repertoire. Feel free to sneer at us hicks, but we’d just never had a reason to use one before. In our emboldened orange chariot, we meandered around town, detoured through the spooky Wacker Drive tunnels that served as the backdrop for the explosive Batmobile chase sequence in The Dark Knight, which of course made Wacker the greatest street in Chicago in my mind.

At some point reached our first indoor attraction for the day: the Field Museum of Natural History. In the front lobby we had the pleasure of saying hi to Sue the T-rex, her teeth the length of human arm bones, and a host of other introductory exhibits. 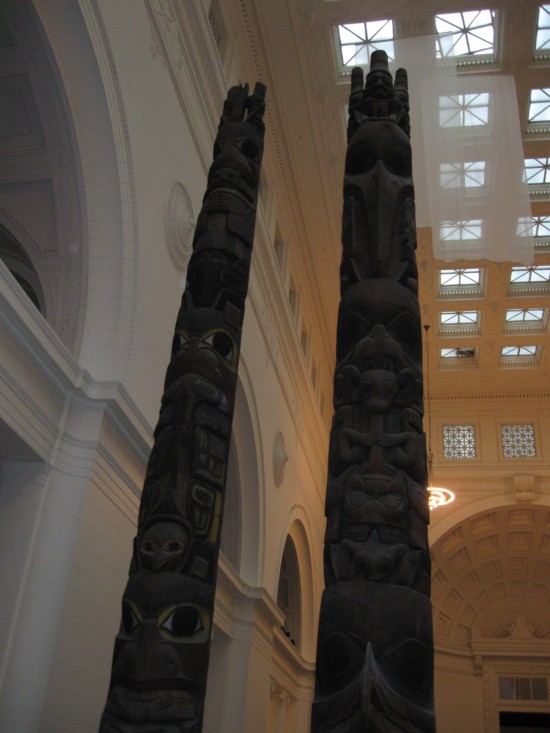 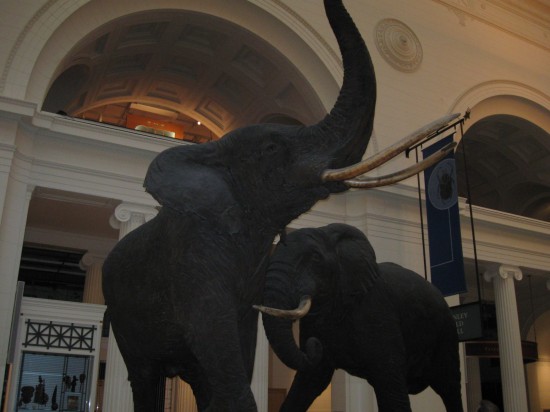 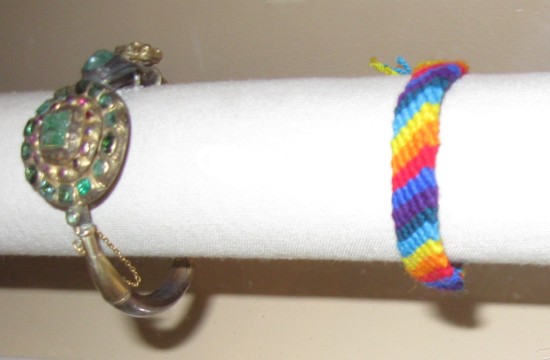 Bracelets from two different tribes: the Kabyle of Algeria, and the Deadheads of California. That last part isn’t a joke. Any sufficiently advanced fandom can be subjected to anthropological study. 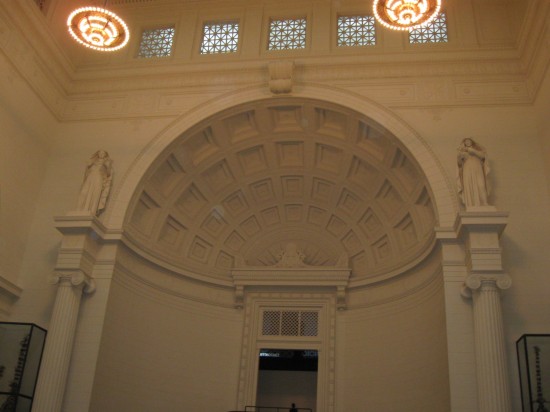 The mere architecture was an exhibit of sorts in itself, with or without artifacts or taxidermy in front of it.

Items viewed but not photographed included giant meteorites, intricate jade carvings, ancient gold jewelery, South Pacific tribal masks, a real outrigger canoe, and dead bugs. The women folk skipped away to go browse other, girlier exhibits — more jewelry, South Pacific objects, learning opportunities involving dresses, things like that. Meanwhile, the boy and I forged our own trail toward the dinosaur exhibit, where we saw displays of creatures with convoluted Latin names like “chondrichthyan”. And did you know that “parasaurolophus” is pronounced “pa-ra-sau-ROL-o-phus” with the accent on the “ROL”? All this time I’d been pronouncing it “PAIR-a-saur-a-LO-phus” like a common chump. I appreciated getting schooled on that. 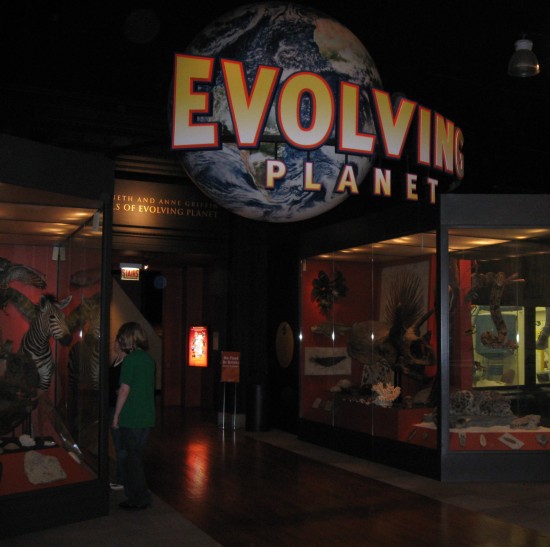 Creationists and evolutionists can agree on at least one thing: ancient Earth be different than current Earth. 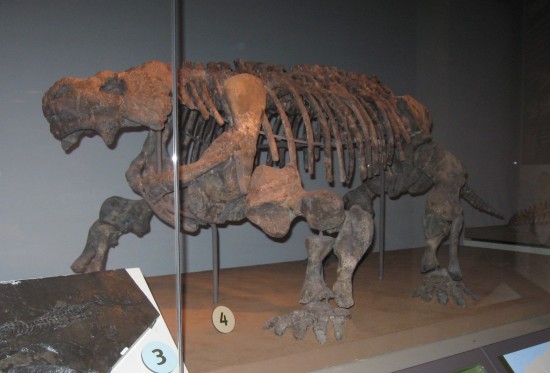 A large pareiasaur skeleton. I didn’t copy down the pronunciation guide on that one, only the spelling. 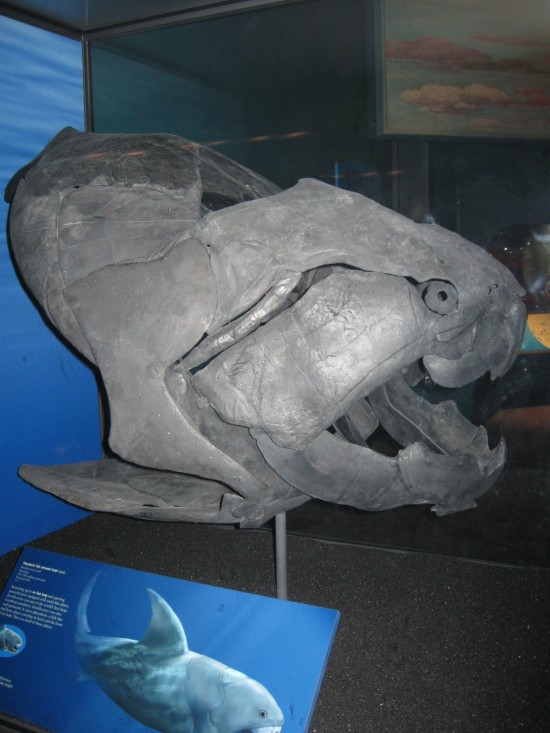 As of this writing, the Placoderm has yet to star in its own Syfy Original Movie. 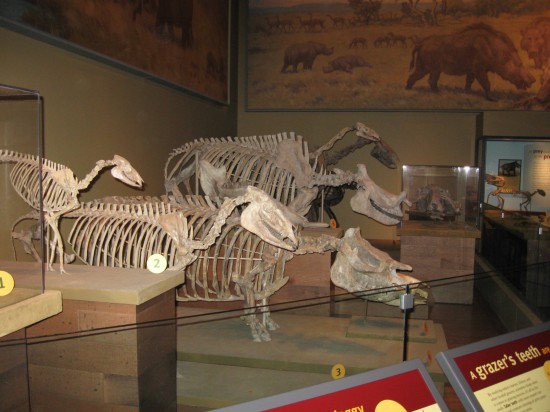 An army of herbivores lines up for inspection. They all pass. 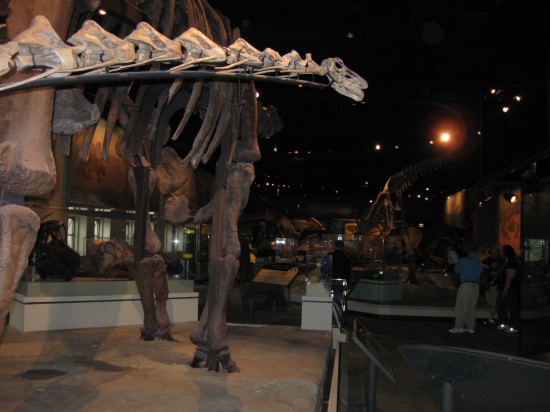 A stegosaurus gazes longingly at its neighbors. 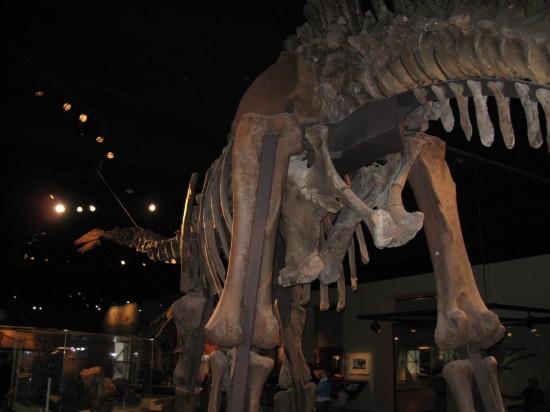 When we were kids, this was a brontosaurs. Now it’s an apatosaurus. Unless scientists reclassified it again, or decided it needed a longer and more euphemistic sobriquet.

We also dawdled at length at an ancient Egypt exhibit that got increasingly creepy as we walked further into it. 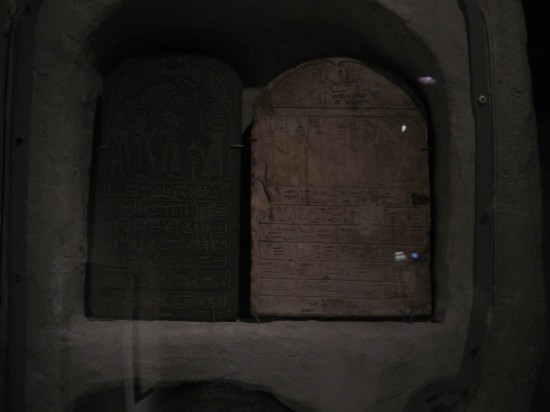 In those days, social media posts took days to carve, but they lasted for generations. They got by just fine without an “Edit” button. 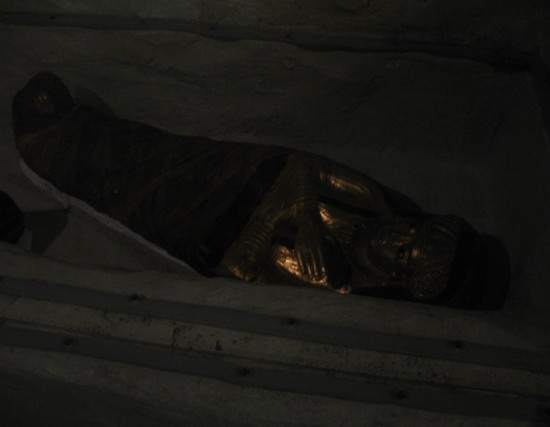 Classic sarcophagus in a dim corner. 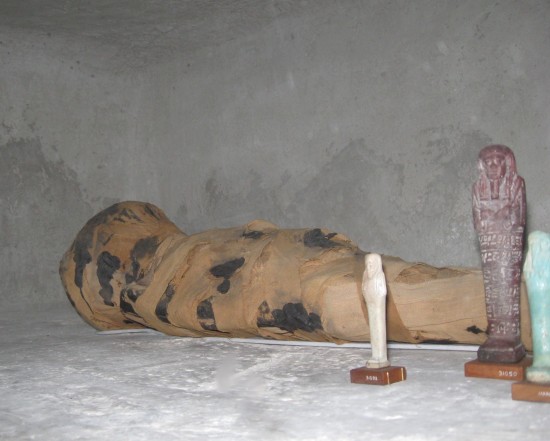 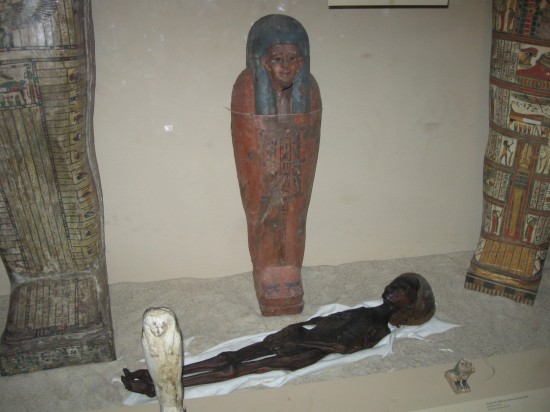 Right around here is when history got too real and disturbing.

The ladies weren’t sorry to miss that section. We rendezvoused, grabbed quick lunch at the museum café with mixed results, and prepared to find a way to our next stop: another giant-sized museum.

1. Taxicabs wouldn’t factor into our travel planning again until our 2016 return to New York City, when they were the only real way to get from LaGuardia to our hotel unless we wanted to drag our luggage around on the subway. I was tempted, but had to be realistic and not cruel with my family.

2. Sue the T-rex is presently out of sight for much-needed repair and restoration, but is expected to return to her educational position at the Field Museum full-time in spring 2019. If you can’t wait that long, you can follow her behind-the-scenes adventures and stream-of-consciousness soundbites on her official Twitter account, which I suspect may actually be handed by an anonymous assistant. I have no proof of my hurtful allegation, only a gut feeling.]