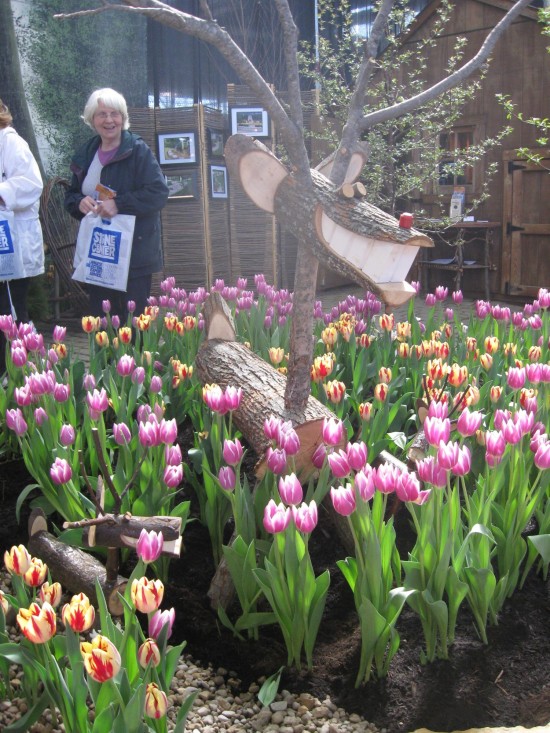 Shout-out to the wandering stranger who just had to stop and ogle the wooden reindeer at that exact moment.

Twice per year my wife Anne and I escort her grandmother to one of two special events at the Indiana State Fairgrounds. Each November we visit the Indiana Christmas Gift and Hobby Show. Each March the highlight of her month is the Indiana Flower & Patio Show, which features numerous displays of colorful flora, booths where gardeners and homeowners can peruse and pick out their new seeds, plants, implements, and accoutrements for tending and cultivating their yards in the forthcoming spring and summer. Assorted horticulturists and lawn care companies show off bouquets, sample gardens, and ostentatious flowers you’ll wish you owned.

[After the 2016 show] Mamaw…expressed some concern about how many more times we’ll get to share this outing. She’s 91 years old, isn’t beautifying the plots outside her house as much as she used to, and is finding the sensory overload more exhausting than ever. As long as she’s still interested in attending her annual Super Bowl, we’re happy to keep seeing her there.

Now she’s 92. Despite our hopes for a miracle or a superpower origin or even a monkey’s paw, she isn’t getting any younger. After her medical event last November we wondered for months if she would feel up for any more public outings. Neither Anne nor I wanted Mamaw to miss out on her favorite place in the springtime…but as of right now, our annual tradition is officially not happening.

Anyone who knows nothing about flowers but walks the show floor long enough will, at the very least, come away knowing what tulips look like. They’re everywhere.

Mamaw knows this year’s show kicked off last weekend, and continues this weekend. Even with me chauffeuring her in her wheelchair, as we’ve been doing the past few years, the prospect seemed too daunting for her. Earlier this month we even found that grocery shopping is more than she can handle at her present low weight and middling energy level. After she was released from the rehab center, she was given a walker for everyday household navigation. She’s still hanging in there and keeping busy at her own speed, but the Show is beyond her adjusted capacity for her adventure.

Hence tonight’s look back at some of the fun we’ve had over the years. All photos in this entry are from the 2009-2012 Shows, before I began posting about them on MCC. The time seemed right for a brief retrospective.

The Flower and Patio Show was where Mamaw had fun spending her birthday money, along with occasional funds that the grandkids would stuff in her purse when she wasn’t looking. It was where stocked up on dark chocolate candies from the South Bend Chocolate Company. It was where she pestered a particular jeweler to change the battery in her favorite watch. It was where she stocked up on Christmas sweaters and novelty sweatshirts to add to the room where she stacks decades’ worth of clothes, some of which are later sourced out as gifts to other womenfolk. It was where she fussed over every cute baby in her path, sometimes a little more up-close than the mom would prefer. It was where she’d share details of her health issues with any sales reps who ventured to interact with her beyond a basic greeting.

And it was where she once cornered a mayor. Thanks to her persistence, in 2011 we got the chance to meet Indianapolis Mayor Greg Ballard. He wasn’t an official guest. He and his aides were walking around the exquisite garden areas when the doors opened to the public, and failed to escape before we walked in and recognized him. She made a beeline right for him, intercepted his party, and…next thing we knew, we were in a free photo op. She was still fairly spry in her 80s. 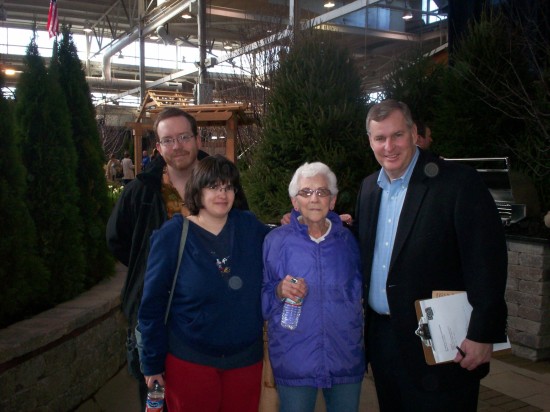 Thankfully his security guys were cool and gave acknowledging nods to the looks of “We’re really sorry about this” in our eyes.

We could attend the show without her, but it’s not the same. We’re terrible at gardening, and neither of us is as adorable as Mamaw. I mean, Anne is pretty close, but she would agree that Mamaw is next-level.

Regardless, we have our memories of the good times, the shared moments, and the cool things other people made and showed off in the name of outdoor decor and fresh-air enjoyment. 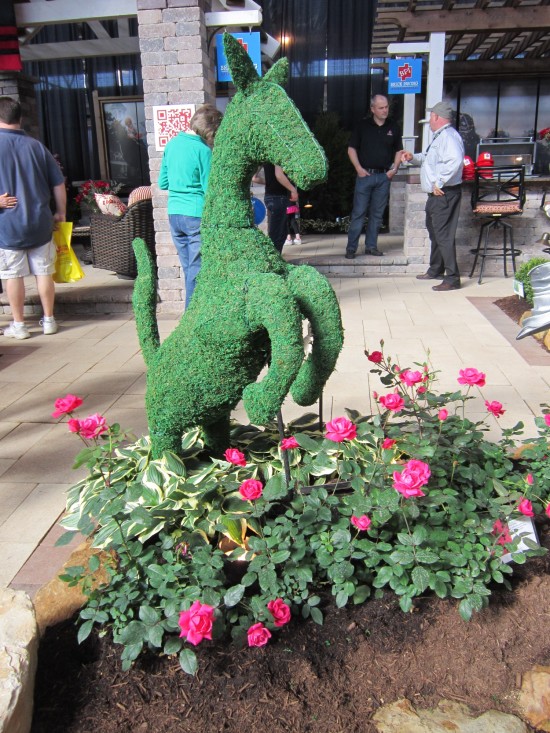 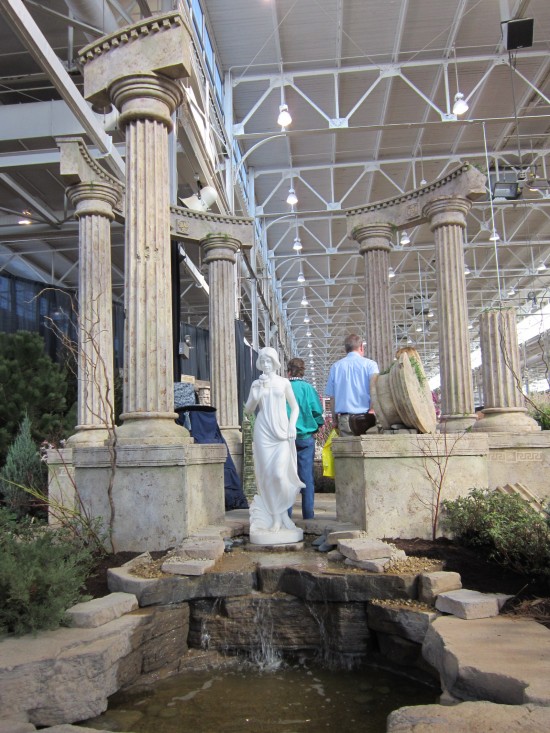 Roman architecture turns any ho-hum backyard from a colossal waste into a Coliseum. 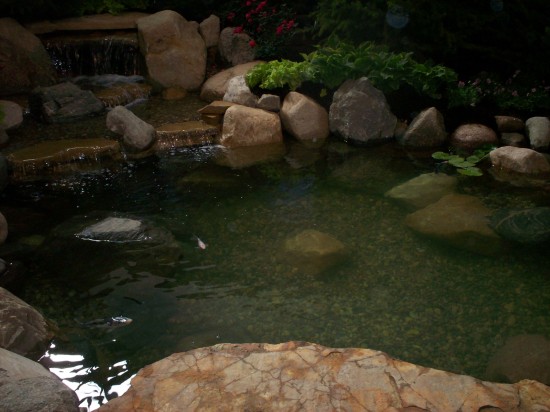 Or ponds are nice, too. 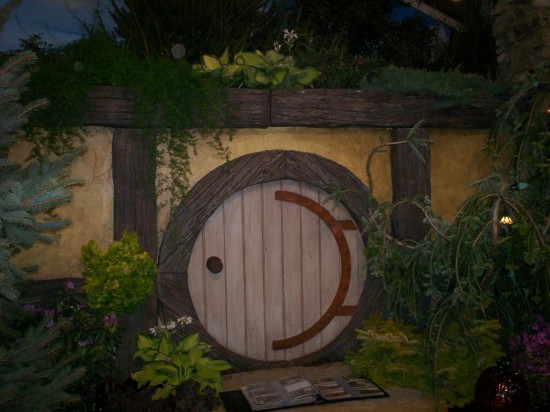 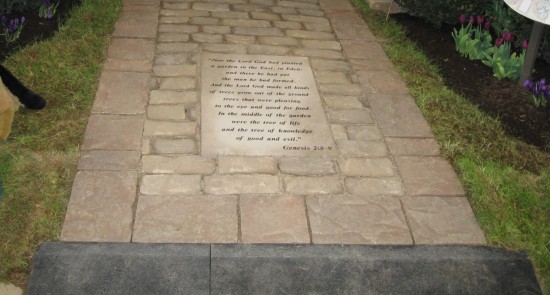 A walkway bearing Scripture attesting to the inherent goodness of gardens…well, except the one plant that turned out to be a gateway to Sin, mortality, and the aging process that separates wonderful ladies from their favorite places. That plant sucks.