An unlikely trio poses for the cover of their big debut album.

…and a few stops in Kentucky on the way back. It all comes down to this: our Sunday morning drive home, and a single planned stop before returning to Indiana.

When making our arrangements to check out Fanboy Expo’s “Totally Awesome Weekend”, I had hoped to place our hotel reservations in Lexington, the city closest to a halfway point between Indianapolis and Knoxville. Alas, ’twas not to be — nearly every hotel in the area was sold out. A major horse race, a University of Kentucky football game, a big arts/crafts festival, and other assorted autumn outdoor events converged on that same weekend. We ended up staying a bit farther south in the town of Berea — fewer commercial amenities, but a pleasant stay nonetheless. On the way home, though, our last stop would be in Lexington at a place we’d last visited in another state.

Cabela’s now has two Indiana locations, but they’re a recent encroacher on the Hoosier turf of Galyan’s, Gander Mountain, and Dick’s Sporting Goods. So far, knock on wood, no sign of Bass Pro Shops within 100 miles of home.

Also previously on MCC: on our 2006 road trip to Wisconsin and Minnesota, we first stepped foot inside a Cabela’s, a chain of sporting/hunting goods superstores that specialize in elaborate taxidermy dioramas throughout every department, three-dimensional examples of how You, the Hunters at Home, can put your kills to use as an interior decorating option. The animal arrangements at the Cabela’s in Owatonna were noteworthy enough to have their own entry in one of our odder travel guides. Eleven years later, here were again, but at the Cabela’s in Lexington, KY.

The first deer to greet us as we entered.

These deer look a little more uncomfortable than our deer door greeters.

The title bout I’ve been waiting for since childhood: Bullwinkle vs. Marty Moose.

More deer, and plenty of ways to take them down. Not pictured: the Cabela’s even larger “Gun Library”.

We weren’t here to shop much. Neither Anne nor I are accomplished outdoorspeople and have no interest in camping, fishing, hunting, or other “guy” activities of that nature, or in nature unless it involves breathtaking natural wonders and reasonable walking distances. But this Cabela’s provided one critical service that was as yet unmet on Anne’s to-do list: they had a smashed penny machine. Longtime MCC readers may recall Anne collects smashed pennies. I’m willing to go out of my way for the sake of her side hobby, which makes cost-effective travel souvenirs that shine rather nicely if she chooses her pennies wisely for the copper-smooshing process.

While she smashed and smashed, and then smashed some more, I availed myself of the grandest display of all, their centerpiece of dead animals coexisting on a mountainside retreat without slashing or eating each other. Separately they’re man’s prey, but together they’re nature’s supergroup, or at least would be if they had teamed up against us in the wild instead of being hunted, stuffed, and posed here for our amusement or bewilderment. 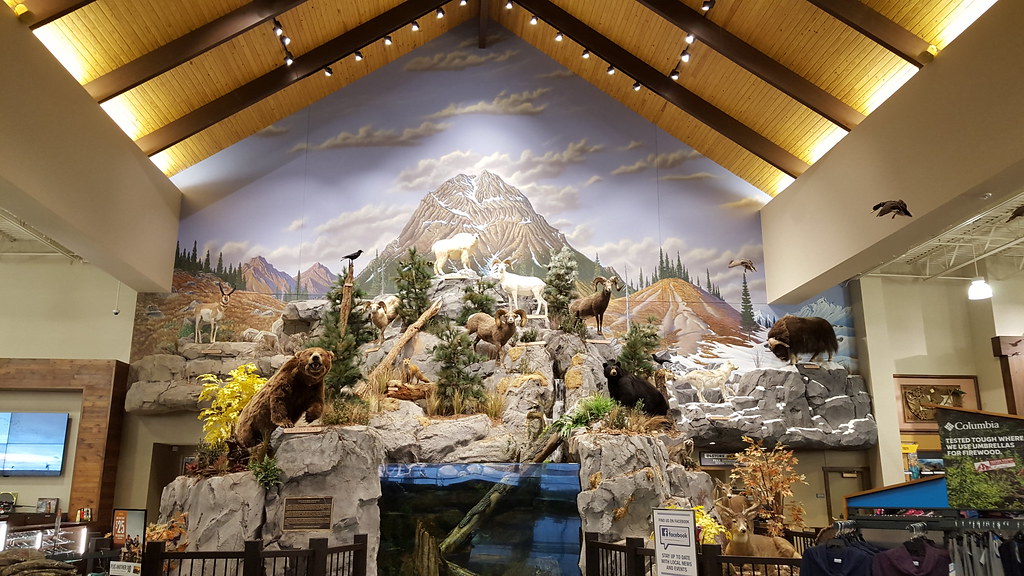 Cabela’s: when you want to see a lot of animals in one place but you don’t care if they’re moving and you hate zoo admission prices.

More wolves, who’ll chase after anything in horns.

A few animals are labeled for educational purposes, because not every kid is learning about raccoons from Mutual of Omaha’s Wild Kingdom or Guardians of the Galaxy.

Real live fish, not stuffed ones. I imagine fish taxidermy is a lot harder because dunking them in water would ruin all the shredded newspaper inside.

Scene from an alternate timeline in which Rocket J. Squirrel partners with Smokey the Bear after Bullwinkle dies in mortal combat against Marty Moose.

Anne got her smashed pennies, we picked up a bit of candy, and we fled.

Other than a couple of water towers and a nuclear power plant we didn’t know was there, the drive back to Indy was thankfully unremarkable. After the convention, the Flash, the Sunsphere, the dragon, the dead fireworks store, and the Colonel, we’d had ourselves a satisfying and fully packed weekend — to say nothing of our busiest convention year on record — and were more than ready to spend the rest of 2017 on downtime.

And with the clock nearly run out, we conclude this miniseries at long last, just in time for a new year and, Lord willing, an all-new series of fortunate events in 2018. Thanks for reading!

* Pedestrians Among the Not-So-Pedestrian
* Our Fanboy Expo Totally Awesome Weekend 2017 Photos
* Scales of Danger!
* Journey to the Heart of the Sunsphere
* The Art of a Downtown Knoxville Walk
* Slices of Life After the Tennessee Fireworks Fire
* Cumberland Falls in the Fall
* The Man Who Invented Chicken