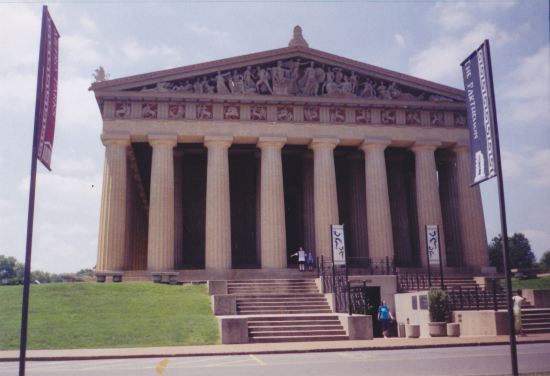 You won’t believe how we drove from Indiana to Greece in just six easy steps!

Welcome to the first installment of another special MCC miniseries, representing the original travelogue from our 2005 drive from Indianapolis to San Antonio, Texas, and back again in far too short a time. Some hindsight editing will be included along the way as part of the “special edition” processing.

Prior to 2006 all our amateur photography depended on cheap 35m cameras, which were an improvement over the camera I grew up with that used 110 film, or my grandma’s old 126. 2006 was also notable in that we took far fewer photos than usual by our standards today. Sometimes we preferred to enjoy the sights as a family and leave the cameras pocketed. At other points we simply didn’t give ourselves enough time to stop, think, and shoot. At least one site is nearly pictureless in our scrapbooks because we were disappointed with the exhibits.

As a result, you’ll notice most of these ten entries will contain more words than pictures. If that’s a drawback, stay tuned because we’ll have some awesome new convention cosplay photos coming in the next 2-3 weeks, we swear.

Eight states, seven days. That was our goal. For those who like to play along at home, you can make a fun exercise out of trying to retrace our footsteps on your own map collection. Alternatively, you can start your own office pool and try to guess how much we spent on gas for the whole road trip.

Step one required the acquisition of a really cool toy. Last year we’d learned the pitfalls of using our own car for long-distance transportation the hard way and decided to try renting this time. After considering the pros and cons and weighing the minutiae, I ultimately settled on Avis as my rental company of choice for three reasons: unlimited mileage; open on weekends; and conveniently located two blocks down from my workplace, unlike many other companies that prefer to flock around Indianapolis International Airport, which is a nice place but wasn’t nearby.

We were prepared to settle for a modest “full-sized” car, but an unexplained discount on Avis’ line of small SUVs swayed my thinking and saved us thirty bucks. The winning vehicle was a 2005 Hyundai Santa Fe, which at the time seemed like science fiction on wheels. From 1998 to 2011 my car of choice was a ’96 Chevy Cavalier that lacked such attractive bells and whistles as power windows, power mirrors, remote power locks, cruise control, sufficient trunk space, CD/cassette player, ergonomic adjustable seats, an LCD odometer, functioning A/C, functioning dome lights, and the capacity to intimidate any shorter and slower vehicles nearby.

Comparing the Santa Fe to my Cavalier, I fell in love at first gear. My son appreciated the spacious back seat, plusher cushioning, and numerous cup holders. Anne, a more sensible woman with no weak spot in her heart for shiny gadgetry, was more concerned with safety issues, especially since I’d never driven anything larger than my mom’s old ’89 Chevy Celebrity. Back in those days, every other SUV had widely publicized, deadly rollover issues. I assured her I had neither the required ineptitude nor the haphazard plan simply to roll the SUV all the way to Texas. She remained skeptical but open-minded.

I picked up the Santa Fe with a full gas tank on my lunch break. After breezing through the other half of an unremarkable workday, we spent the evening test-driving our trusty wheeled companion and running last-minute errands — doing a final laundry run, having our mail delivery stopped, and, most challenging of all, searching for someplace willing to sell us a pair of boy’s swim trunks in late July because my son’s own had somehow gone MIA. We accomplished everything but the swim-trunks purchase, adding it reluctantly to our on-the-road to-do list.

As we packed the Santa Fe at 6 a.m., we noticed that the right wheel tire on my Cavalier was somewhat deflated. A cursory inspection revealed a large screw embedded between the treads, a screw that would’ve dragged out our morning an additional two to three hours if we’d planned to drive my car to Texas. (Anne’s car, older and more cramped than mine, was not and will likely never be considered for such endeavors.) We figuratively patted ourselves on our respective backs for the rental idea and added the inevitable tire repair to our post-vacation to-do list.

After one hopeful but futile stop at my son’s mom’s house to search one last time for his missing trunks, we hit the open road. The first leg of our trip was a familiar and uneventful shot down I-65 South, crossing the Kentucky border less than two hours from Indianapolis. Our first stop was exit 76 near Upton for our first fill-up of the trip. Since I wasn’t too sure how much gas the Santa Fe held or used, I’d resolved to stop whenever the needle passed the halfway mark, which worked out roughly to one stop ever 200-250 miles, sometimes less for the sake of convenience. Not knowing the Santa Fe’s mileage capabilities had made it hard to budget for gas expenditure in advance, so I figured I’d just wing it, come what may. After an initial gas fix of $21.57, we navigated the rest of Kentucky without further incident or highlight unless you count the sight of a garish T-Rex statue at the Cave City exit advertising Dinosaur World. My son, the big dinosaur buff who could pronounce “pachycephalosaurus” at age three, demanded we return someday for follow-up exploration. (His wish was granted in 2007.)

Anne and I had last entered Tennessee in 2001 when we took an ignorant wrong turn on our way home from Metropolis, IL, but had only stayed long enough to stumble across I-65 and retreat. Today, then, was the first time Anne and I ever entered Tennessee on purpose. We stopped in Nashville for lunch in the first unfamiliar cheap place we found: a Jack in the Box. 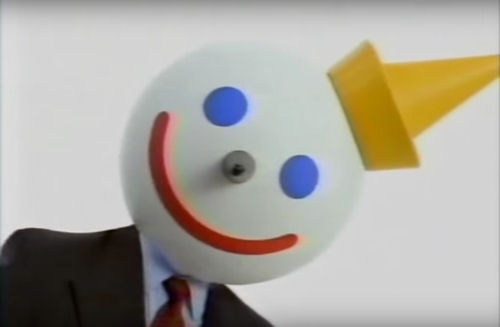 Would you buy a burger from this mascot and/or potential movie monster?

As of 2005, Indiana had not a single Jack in the Box franchise around, so we seized the opportunity to sample their wares. The menu seemed more diverse than I’ve come to expect from fast food (fast-food egg rolls? What a country!), but I was more disturbed by their mascot, a Mr. Bill doppelgänger whose much emptier visage was prominent in several wall hangings and fake portraits around the lobby. I hadn’t seen a fast-food joint hype its own spokesperson since Dairy Queen plastered Dennis the Menace all over its walls back in the early ’80s. The service was around the speed of Hardee’s, the price was near Fazoli’s level, and my Bruschetta Chicken Ciabatta — pronounced like “Chewbacca” but in an Italian accent — may be the most pretentiously named fast-food sandwich I’ve ever eaten. Regardless, we were starving enough not to sweat the details.

(Jack in the Box eventually penetrated the Indy market in 2012 with several locations. My two visits to the one nearest our place were unremarkable. Last weekend we noticed it’s now shut down and boarded up. I’ve no idea how the other locations are doing.)

A half-mile later down the road, it was time for our first official Tennessee tourist attraction. Graceland? The Appalachians? The Grand Ole Opry? Bah. Obviously nothing says “Tennessee” like Greek architecture. Dollywood, Schmollywood, I say. Hence, pictured above, the Parthenon. 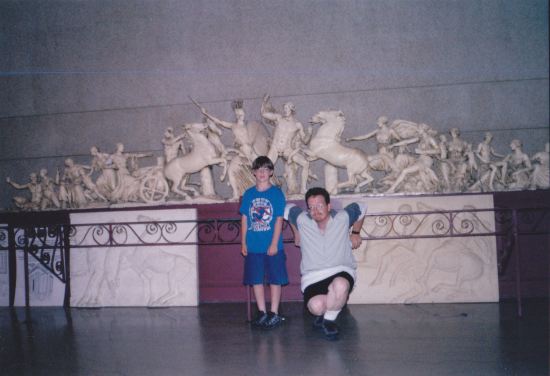 A frieze replica at eye level provides a better chance to admire the craft and labor hours that went into sculpting such intricate, faraway trimmings.

The near-to-scale faux-Parthenon was built in 1897 to commemorate Tennessee’s state centennial celebration. The intent/joke was a nod to Nashville’s alleged reputation as “the Athens of the South”, although none of the exhibits we saw explained how Nashville earned this nickname, whether as a reference to pervasive high culture, frequent Socratic dialogues, penchant for togas, predilection for gyros, or what have you.

The original construct was built on the cheap, but left to linger until the 1920’s, when someone got the bright idea of making it a permanent fixture in the Nashville landscape. It opened in 1933 and remains to this day a monumental city-park centerpiece as well as a public museum. Inside is a photo-gallery about the origins of this Parthenon as well as the current state of THE Parthenon, along with detailed and labeled replicas of the friezes atop either side of the building.

Their premier exhibition, though, is the statue of Athena. 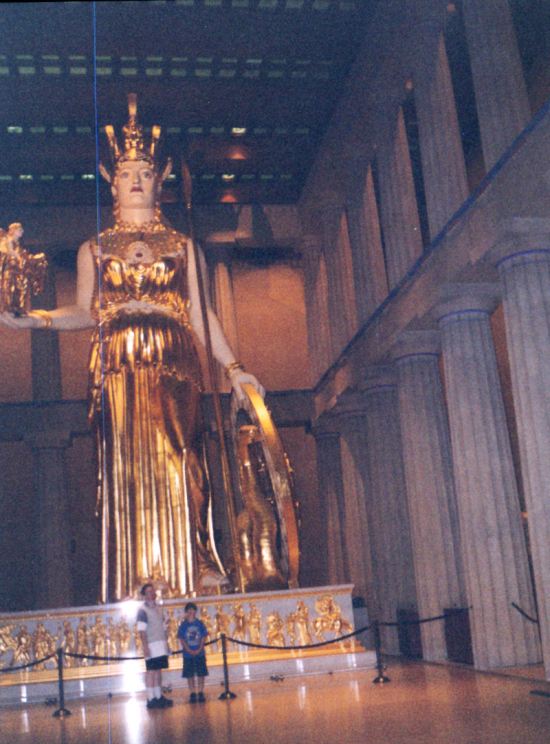 Now that is the sort of war goddess you can imagine leading vast armies to victory.

Forty-two feet tall and covered in bucketloads of gold leaf and ivory paint, she’s a copy of the original statue believed to have been on the Acropolis alongside THE Parthenon. Her aegis is adorned on both sides with pictographs (read: “old comic books”) of various confrontations that the Greek gods oversaw. The snake beside her is thought to be symbolic of Athens herself, which Athena of course personally guarded. In her right hand is Nike, the winged goddess of victory who is to this day owed several billion dollars in unpaid shoe royalties. 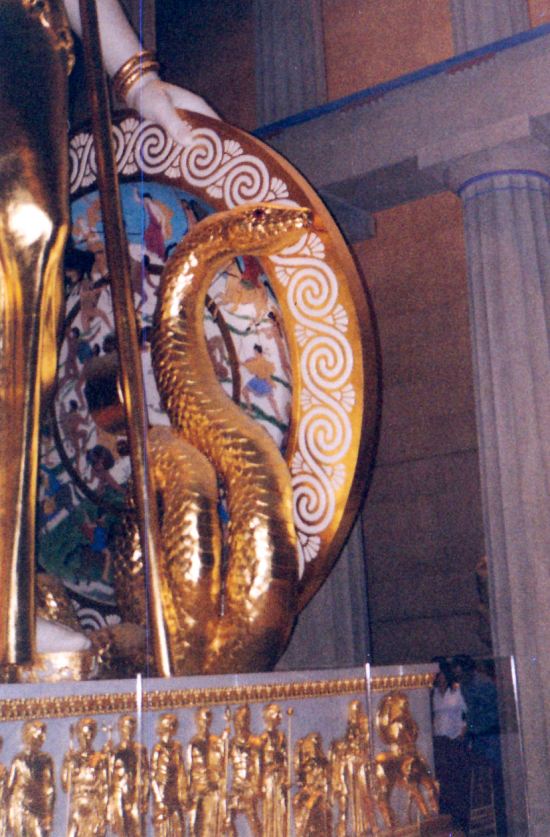 The other exhibits couldn’t hold a candle to Athena herself. A painting gallery included Greek homages, off-topic cowboy settings, and un-Greek local artists. A traveling-exhibit area showcased the assorted canine-based works of William Wegman, overt non-Grecian and prescient forefather of all your favorite modern dog memes. The gift shop was simple but appreciatively on-topic, helpfully offering copies of Edith Hamilton’s classic Mythology in lieu of the more popular Bullfinch. My son picked out an Athena-statue figurine whose teensy li’l pet Nike has a simplistic face uncomfortably reminiscent of the Jack in the Box mascot.