Scenes like this are why no one lets us design travel brochures.

Previously on Midlife Crisis Crossover: once upon a time in 2004, Anne and I got married and had a honeymoon! A week later, we (and my son) embarked on our fifth annual road trip.

Welcome to the first installment of another special MCC miniseries, representing the original travelogue from our first vacation as a capital-F Family: a drive northeast from Indianapolis up to see the watery wonders of Niagara Falls and its adjacent tourist traps. Some hindsight editing will be included along the way as part of the “special edition” processing.

Prior to 2006 all our amateur photography depended on 35m cameras, back in the day when finished film rolls had to be dropped off for developing and whose pics then had to be scanned using the terrible tech available on our low budget at the time, then uploaded via miserable AOL 56K modem. For years I hated hated HATED scanning under those conditions, which means our oldest internet friends who already read what Anne and I wrote have never seen any of the photos that’ll be newly shared throughout these ten chapters. Very little about these entries will approach 1080p quality. Back in our day, this is what history looked like. When these were first posted, they were as much about the writing as they were about the pics. That’s why two of the ten chapters will contain more words than pictures, if you need such an advance warning. They’re our stories to tell nonetheless, captured in our memories if not by our shutter clicks.

We’ve crossed into Ohio many times since childhood. If you stick around till Chapter 10, you’ll see why we no longer talk about it in glowing terms.

Having gone to church on Saturday night so we could get an early start, we headed off to our first destination: Erie, PA. After an hour in Indiana, four hours in Ohio, and another several miles or so through Pennsylvania, around dinnertime we arrived at a Fairfield Inn just off of I-79 North, behind a mall, right next to a Homewood Suites and a Dick’s Sporting Goods, neither of which did us any good.

We ate supper at a nearby Outback Steakhouse, which was scrumptious after the long drive except for the part where they tried to serve my son a blood-red cut of meat. His near-miss with E. coli notwithstanding, I was just happy to be eating anywhere except Subway. Over the previous three weeks I’d dined with my old nemesis for reasons of convenience and diplomacy, and hoped never to step foot in one for the entire vacation, perhaps even longer, Lord willing.

Since it was a rainy Sunday evening unlikely to provide us with impressive entertainment under such conditions, we spent the remainder of the day in the deserted hotel swimming pool. My son enjoyed trying out his new snorkel, goggles, and Nerf-based giant flotation “noodle”. When we all finally got out of the pool a few hours later, he decided that nothing else on the vacation could possibly be as fun as the hotel pool. His verdict would carry over for the next four or five vacations whenever our hotels had pools. For a while “pool” became a must-have during my reservation process, just for him. 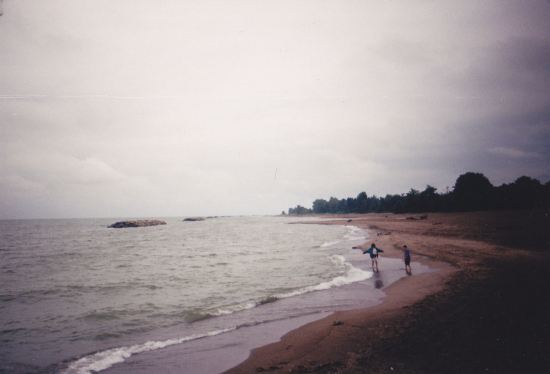 It was still raining Monday morning, but we headed undeterred to Presque Isle State Park, the premier Pennsylvania spot for sightseeing on scenic Lake Erie at its southeast corner. The skies through most of the week would stay dispiriting and blah and rendered 2004 one of our grayest trips on record. The rain was no deterrent to the boy, who set his mind to making the most of it. I’m sure he was thrilled just to be anywhere except stuffed in the back of my ’96 Chevy Cavalier.

…you can run along the lakeside, especially on a dreary morning when no one else in their right mind will be in your way…

(except for this one guy cruising on his ATV)

…or you can just take off your socks and shoes and prance about in the freezing water. Incredibly, he did not catch his death of cold.

Anne and my son wandered up and down the beach, at one point kicking off their shoes and socks and tiptoeing into the shallow part, ugly gray sky or no ugly gray sky.

It was the first real quality time for the first-time stepmother and her new stepson. 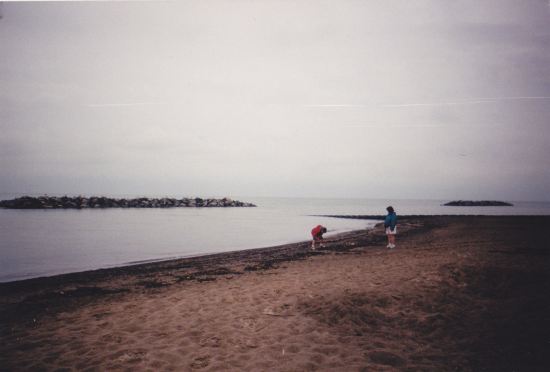 They’d known each other for years, but she was Dad’s best friend. Not the same thing.

I stayed ashore, holding an umbrella in one hand and my camera in the other, the better to collect archaeological evidence without catching pneumonia.

We ambled around a few hours’ worth of beaches, scarce buildings, and a few plaques proclaiming important moments in Presque Isle history.

The Presque Isle Light, an 1872 lighthouse on the National Register of Historic Places that wasn’t admitting visitors.

The Perry Monument, a tribute to War of 1812 hero Commodore Oliver Hazard Perry in his old stomping grounds.

We’d just missed the Presque Isle Days Festival, an annual three-day beach party. The aftermath lay all around us in the form of assorted sand-based creations left standing overnight on each of Presque Isle’s ten beaches. 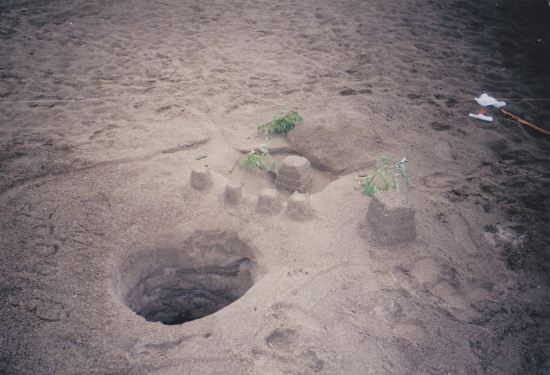 An entire sand town perched on the edge of a deep sand pit, possibly meant to house a baby Sarlacc. 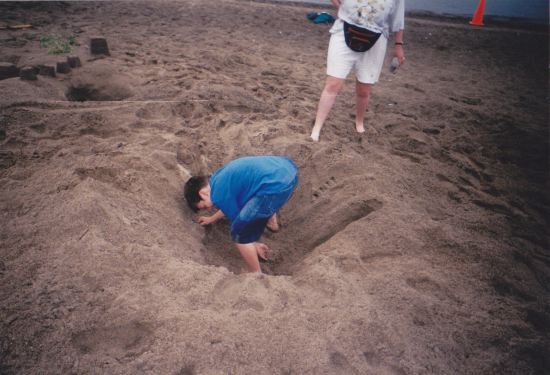 This larger, more shallow pit was like that when we got there, but the boy added another basement level.

Then we returned to the car, dried out, grabbed lunch at an unremarkable Arby’s, and headed toward our next hotel in Amherst. Soon we’d find ourselves on the brink of much prettier waters.