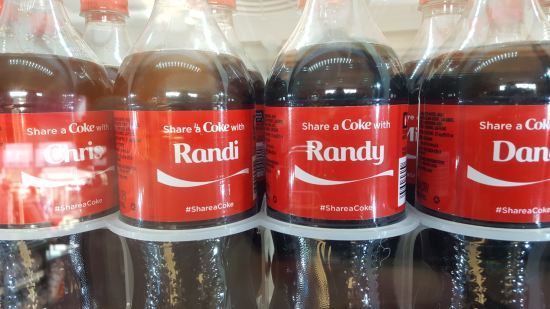 …I would try very kindly not to make a big deal because you’re one of the only six people on Planet Earth named “Randi”. Despite your rarity, whenever someone writes my name down on a form, application, sign-in sheet, Starbucks cup, or speeding ticket, your kind is the reason I’m too frequently asked, “Is that with a ‘y’ or an ‘i’?” I try to keep an open mind here in the 21st century, but I’ve been fielding that largely nonexistent dichotomy since the 20th.

Mom thought naming me after my dad was a fantastic idea. He wasn’t around much after my birth, so opportunities to confuse us were seldom and we never had to worry about coming up with paired modifiers — “Little Randy” versus “Big Randy”, “Young Randy” versus “Old Randy”, “Fat Randy” versus “Future Fat Randy”, and so on. For the first four years of my life he was one of only two other humans with a name like mine. The other was Randolph Mantooth, costar of TV’s Emergency!, who was the reason my first few schoolteachers had trouble accepting that my full name was “Randall” and not “Randolph”. Now that “Randolph” is near extinction, I take pride in how onomastic natural selection has favored my kind over his.

Namesakes were otherwise infrequent throughout childhood, though I was shocked when one of them moved next door to us when I was five, another Randy a year younger than me. The odds of having two kids named Randy in the same peer group are probably astronomical, but there we were as fate would have us. He moved away when I was in seventh grade, leaving me to hold down the fort on behalf of us. We met up again nearly thirty years later thanks to the magic of Facebook, and in hindsight it’s a shame we never took the opportunity to take turns shouting, “His name is my name, too!”

There was the other Randy I knew in elementary school, whose similarities to me didn’t reach much beyond that. There was ice skater Randy Gardner, never mentioned in a sentence in public without his partner Tai Babilonia. From the world of my comic-collecting hobby there was Dark Horse Comics co-founder Randy Stradley, inker Randy Emberlin, and idiosyncratic artist Randy DuBurke. Unfortunately the only Randy on my TV airwaves for a good while was the crude bully puppet from Pee-Wee’s Playhouse. When I grew up and found the internet, my dreams of using my preferred name throughout every website and social-media check-in has been hampered by the existence of a select few individuals who share my first and last name, including some guy who once wrote a book about Georgia tourism, which threatens to complicate authorship for me a tad if I ever decide to follow his lead.

Over the course of decades I’ve risen above the isolated rank of The Only Randy Ever to being one of many, neither interchangeable nor wholly unique. Switching to “Randall” might earn me a little more elbow room, but I don’t answer to it. In fact, it’s a quick way to judge whether or not I’m being addressed by someone who really knows me, like how close friends of Robert DeNiro call him “Bobby”. Rarely do we see a Randall out in the wild — attempted actor Randall Batinkoff; Randal Kleiser, director of the disappointing Big Top Pee-Wee, born missing an ‘L’ from his name; and Eagles quarterback Randall Cunningham, who I’d heard of only because people would sometimes jokingly shout “RANDALL CUNNINGHAM!” at me under the mistaken assumption that I knew sports and would laugh along, or appreciate it, or toss them the ol’ pigskin, or I don’t even know what.

Our scarcity would explain why I could never find personalized merchandise with my name on it as a kid. No “Randy” cups, no “Randy” mugs, no “Randy” keychains, no “Randy” magnets, nothing. Ditto “Randall” and “Randolph”, though my vain searches told me apparently “Ralph” used to be all the rage at one point in human history, possibly thanks to that dynamic duo of TV’s Ralph Waite and Ralph Malph. It goes without saying that nearby names like “Robert” and “Richard” had their every whim catered to by every knickknack manufacturer in China. But “Randy” was presumed emptor non grata or however that tenses up in Latin.

So it was a shock to me some time ago when I ran across the pair of Coca-Cola bottles pictured above, one with my name and one with the name of my imaginary Mirror Universe doppelganger. For once, a major corporation acknowledged my existence, validated my mom’s choice at my birth, and tried luring a few quarters out of my pocket in exchange for ten seconds of fractionally heightened self-worth. Of course I had to record the moment, one of those rare nods to this humble, unpopular nickname of mine.

…so anyway, by the time I stopped yammering on about me me me and decided to let you share a thought while we’re out having Coke, you might have noticed that I haven’t even opened my “Randy” pop. That’s because my 2004-2005 diet killed my tolerance for sugary soft drinks for all time and I can’t stand the stuff anymore. Desserts and baked goods, sure; sweet drinks, nope. So you’d be more than welcome to have mine to take with you even though it’s got my name on it and not yours. After all, the names may label the outside, but they don’t define the contents.