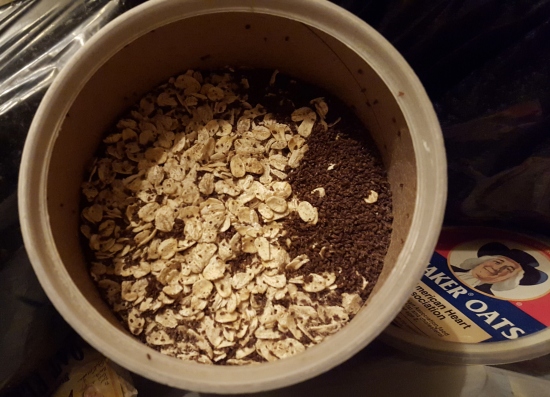 When I opened the lid on the oatmeal box, I stared long and hard, trying to make sense of what I saw. With a creeping sense of horror I realized I’d found exactly what I was looking for.

Over the course of summer weeks we slowly realized our house had a new bug problem. The sightings were isolated at first. An occasional stray bug would crawl up the monitor in evenings while I typed away at this very site, as if offering to proofread for me. An icky loner here and there would be seen wandering across the kitchen floor with impunity, safe in the knowledge that it was beneath the notice of our dog Lucky. They didn’t count on us squinting at them and destroying them each chance we got.

At some point my wife and I each realized separately that more than a few of the little living dots had taken to sunning themselves on our kitchen blinds. Eventually we compared notes and realized we shared the same disturbance. And we knew the famous saying. One’s an incident. Two is coincidence. Three’s a pattern. Ten is invasion.

There had to be a source. I poked around a few corners of the kitchen till I realized they had to be coming from the pantry. This wouldn’t be the first time insects have made our pantry their infiltration point. At least twice in the past nine years, armies of hungry, rude ants have tunneled their way in there through the baseboard corners and insinuated themselves into any open snacks they could find, showing a particular preference for my Whole Wheat Ritz crackers, even when I hadn’t opened the package yet. A combination of ant traps and heavy-handed caulking cut short their most recent reappearance in a previous summer.

We may look inside our pantry daily, but we don’t always examine every nook or cranny closely if we’re just reaching into it for those two or three items we need for a given meal. This time I concentrated on the out-of-the-way places and found myself face-to-face with their micro-beady eyes. Many of them were already dead because apparently our tucked-away ant traps kill them dead, too.

Not all of them were dead. Once I really focused, I couldn’t stop seeing them. A bit of frantic crushing commenced. A few of my targets were dirt. At least one or two were probably imaginary. Enough of them were real that I soon switched tactics, grabbed the vacuum cleaner, and proceeded to bring it on. Imagine that scene near the climax of Aliens when Ripley’s combination of machine-gun fire, grenade launcher, and optional flamethrower attachment are exploding alien eggs and huggers and slimy furniture fixtures in every direction around her. Now imagine if instead she’d been armed with a super-sized Hoover and was sucking them all into a giant bag like Santa’s on her back. Unlike Ripley’s screams, mine were mostly in my head, but to me the effect was pretty much the same.

I lost track of the minutes of small-scale carnage, but eventually I stopped seeing movement and I eased down. I replaced the ant traps with fresh ones from the hall closet, then set forth on the next potentially unpleasant task: inspecting any open food packages and tossing out the infected remains.

In the wake of my 2004-2005 diet we’d stockpiled a lot of ingredients that we used once or twice for weird recipes, but refused to toss the leftovers because we just never knew if I might start up again. Casualties of the Great 2016 Bug Hunt included oat flour, cornstarch, and baking soda, among others. Curiously, the bugs found no use for xanthan gum. On this point we agreed with them.

The last food item I checked stood in a back corner of the top shelf, a few feet beyond my wife’s reach without a stepladder. It was a seemingly innocent box of oats. I couldn’t tell you the last time we used them, but they made a nice visual backdrop behind the cookies and chips that always occupy the front row on that shelf. I pulled the box down, popped the lid, and just stared.

Several long seconds passed before my brain would process that all those black dots mixed in with the oats didn’t belong there. Those weren’t factory additives, or just dehydrated oats gone bad from neglect.

I knew now what I had to do: put the oats back on the shelf and set the entire pantry on fire. It was the only way to be sure.

Then common sense returned and I tabled Plan A for the time being. I showed the box to Anne, who confirmed that, no, that’s not what oats look like in any civilization. Not even artisanal oats, which I’m sure are a thing somewhere. Behind our backs this cardboard cylinder of healthy carbs had transmogrified into a surprise vermin farm.

I put the lid back on and calmly carried our freeloading guests out to the sealed trash can in the garage, where they could join their brethren from the emptied vacuum compartment until trash pickup two days later. I went back inside, scraped away the old layers of caulk around the baseboards, laid down some new layers and then some, killed another straggler or two in the meantime, and eventually remembered to resume breathing. Some judiciously applied bug spray made a nice lacquer over the caulk. I finished the purge with equal parts regret and relief.

We’re thrilled to have realized that over the past several days those nuisance sightings finally ceased. Once again the pantry was saved thanks to an incentivized tag-team attack of labor and panic. And we’ve learned important lessons. Leave no foodstuff forgotten. Seal everything. Inspect everything frequently. Toss what’ll never be used again. Clean, clean, clean.

Admittedly, after this incident it may be a long time before we buy oatmeal again. Or raw grains. Or recipe ingredients. Also, I’m keeping Plan A in my back pocket. If Batman or the DEO can hoard kryptonite in case of Dark Superman, we can start pricing flamethrowers in case nature gets any more wicked ideas.