“MUFASA WELCOMES YOU AND REMINDS YOU TO TURN OFF YOUR CELL PHONES.”

After plumbing the depths of Grant’s Tomb we had an afternoon appointment for our very first Broadway show: The Lion King. But first we had to get there. The trip down from 122nd Street to 45th Street wasn’t a short one.

We got off the #1 train at Columbus Circle, a roundabout overseen by the Trump International steel globe.

You may have noticed advertising is everywhere and everything in Manhattan. Even on our ascent from the subway station to the surface, the steps masked a near-subliminal plug for Harry Potter and the Deathly Hallows Part 2.

Our walk took us past famous Carnegie Hall, which, like too many other NYC sites, was under reconstruction.

We stopped briefly at one innocent-looking shoe store to see what we could do about my sneakers, which were turning into rags from the week’s extra mileage. I looked a few price tags, then backed slowly out the door. One of several dozen souvenir stores down the road had prices much more to our liking, but their merchandise didn’t include footwear.

Lunch was on West 49th east of 7th at an authentic Japanese nook called Sapporo that seated fifteen or twenty people and had a line out its short doorway to the street. Somehow we only waited fifteen minutes before being seated at the last table in the back. They handed us menus and a polished wooden box holding three durable pairs of chopsticks. No offer of American silverware was forthcoming. 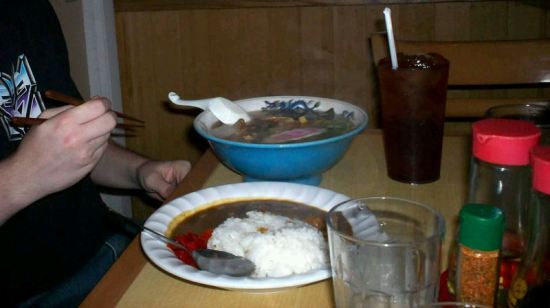 My son’s eyes were bigger than his stomach, leaving him with twice as much food as he could handle. For once his dad was too full to help him out.

Chopsticks weren’t cause for alarm or retreat, just a little unexpected. Directions were enclosed for proper finger placement, so we made the most of it. My son thought we elderly adults would be an amusing and pathetic source of comedy, not even noticing that I finished my tofu nuggets and seaweed salad before he was through one-fourth of his rice curry. Unlike him, I’m good with following directions. I’ll admit more than one nugget was lanced rather than pinched, but the majority of my meal was eaten by the rules.

After lunch we were off to the Minskoff Theatre for our big afternoon with Simba and friends.

Proud Manhattan home of The Lion King since 2006.

My wary preconceptions of a bizarre-looking overpriced Disney on Ice production were shattered within the first three seconds of Rafiki’s exhilarating clarion call that opens the production even more powerfully than in the original film. Complicated puppetry, large complex sets, spectacular vocal performances, lovely instrumentation from all directions (including balconies on either side of the stage, as well as the occasional parade down the aisles), intricate costumes — all imaginable production values were of the highest order. No photos were allowed in the theater itself, but Google has the details.

Bonus points to the Zazu, Timon, and Pumbaa puppets whose motions matched their performers’ beat for beat. Super double bonus points for the actor playing Zazu, who had a grand old time as the most comicky of comic relief, breaking the fourth wall more than once with references to the Mary Poppins revival down the street. Other favorite parts include the scintillating how-did-they-DO-that Mufasa’s-head starfield and the actor who played Scar with a smooth, muscular baritone 100 times more listenable than Jeremy Irons’ strained rasp.

We could only photograph as far as the foyers. Here, Anne finds a rave review.

My son had the kind of lower expectations he reserves for school field trips to homegrown productions of Shakespeare plays. It’s always heartening to see him being blown away by something. We now have the original movie on Blu-ray. I still think it’s one of the best Disney animated films, but it’s diminished in comparison now. (A glimpse of the Minskoff’s giant lion head appears in one of the Blu-ray featurettes, along with a newly animated rendition of “The Morning Report”, Zazu’s only musical number that was later deleted from the Broadway version.)

After the show we were so jazzed that we wished we could see another Broadway show. Alas, the lines at the TKTS booths — where one can pick up discounted tickets for any shows not already sold out — were infinite. Even if access had been easier, most shows end at a time of night that I didn’t care to experience inside the Port Authority.

Expressionistic take on a standard Port Authority bus stop. For our purposes they were handy if gloomy, not exactly inspiring us to stick around and say hi to the nightlife.

As we kept heading down 7th Avenue, I was stopped by a frantic young Italian man who asked me, “Subway?” Always happy to help, I pointed over his head and directly behind him at the Times Square subway station, whose signage has no neon but can still be seen blocks away. As one tourist to another, it was the least I could do. Back home I tend to be picked as Directions Guy for a lot of strangers. No idea why.

Random sights along our way south:

Mickey Mouse and friends, either working the tourists or in town for his own shopping pleasure. 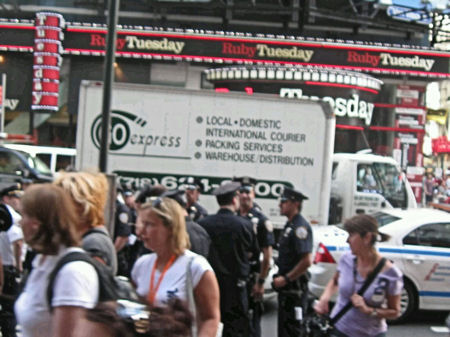 We understand once upon a time this area was a veritable strip mall of sin and pleasure palaces and reasons to keep your hands clasped over your kids’ eyes while you walked. As of 2011, a bit of a friendlier place, far as we could tell. 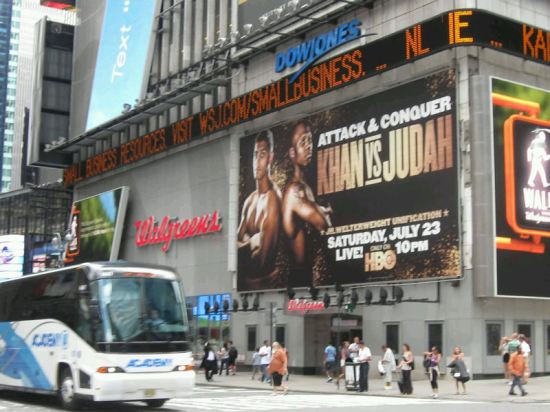 Here, sports fans, have some sports.

Literally a random shot. So. Many. Boring. ADS.

Next up was another bit of self-indulgence: a visit to a real live NYC comic book shop. Marvel and DC, the two largest publishers in the business, have always been prominent Manhattan mainstays, so it would make sense that New York would have the best comic shops. The two-story Midtown Comics, located off 40th and 7th on the second and third floors above a convenience store, fit the bill. I picked up the week’s new releases while my son tried to cover up the spot where he accidentally spilled some of his drink. The guy at the counter welcomed us to town and actually knew one of the shop managers back home by name. I didn’t have the heart to tell him I don’t shop at that particular chain any more, but I said I would pass his greetings along, next chance I got. (In a bit of cosmic irony, I found out a month later that their location four miles from our house closed its doors forever the very same week of our vacation. I wasn’t even in town for their farewell. Alas.)

I thought Anne had taken at least one photo of Midtown’s entrance, but our files say I’m wrong. I was too busy thinking, “NEW COMICS DAY! WOOOO!” to snap any pics myself. Every year I always write down the locations of all the comic shops closest to our vacation stops just in case one of them happens to be convenient on the Wednesday of that week, but this is the first time in years that visiting a shop could be justified as a tourist attraction. You can imagine my excitement.

For dinner I walked us over to the critically acclaimed Shake Shack up 8th Avenue, a bit north of the Port Authority, just in time for rush hour. Anne insisted she was still stuffed from bad breakfast buffet and the Japanese utensil challenge, so I figured I would take care of us males. The lines were long and the seats were full, though several tables seemed to be harboring mere loiterers. When our food was finished, we stepped outside and — with no benches in sight — ate standing up against the windows, loitering where the passersby could watch and dodge us. My wife was not happy with their coin-op unisex bathroom. My son was bitter not only from the walking, waiting, and standing, but also from being not remotely interested in having non-Asian burger dinner foisted upon him. Worst of all, my burger and fries were both made with equal amounts of meh, not even worth the hassle.

It wasn’t till days after the fact that my son finally informed me he wasn’t hungry at the time, either. Oh, the headaches I could have spared us all, had I known. Communication is key, folks.

The bus ride back to Weehawken was a quiet one, among other passengers as well as between us. Others around us were jacked in to their earbud parasite of choice, with only one old-fashioned newspaper reader in the seat next to me, scrutinizing or skimming various articles in a Japanese edition totally bereft of photos. Silly newspaper, photos are the best part. Unless they’re ads. Those photos are the worst.

1. All Trump references have been left intact with the original wording despite severe conscientious temptation to subvert them for exasperated 21st-century purposes.

2. That Mary Poppins production down the street closed in March 2013. I assume the show’s quick jabs at it had to be rewritten accordingly.

3. Our 2016 hotel was around the corner from the Shake Shack. We spitefully refused to eat there all week long.

4. Comics fans are aware DC Comics uprooted their offices in 2014 and moved to California to be closer to their Hollywood affiliates. Jerks.

5. Five years later, I still haven’t been able to pass along the greeting that was asked of me because I haven’t seen the guy since. Allow me to rectify that now: