This weekend my wife Anne and I attended the 38th annual Superman Celebration in the city of Metropolis, near the southern tip of Illinois. We’ve previously attended in 2001, 2006, 2008, and 2015. We don’t make the 300-mile drive every year, but we always try to leave room on our calendar if we can, just in case.

We cleared all other appointments once this year’s four big headliners were announced. Two of those gents are costars of DC’s fun TV version of Supergirl, a favorite of ours this past season. We previously met Melissa Benoist and Chyler Leigh at C2E2 last March. We couldn’t believe we already had the chance to meet two more from its cast — Mehcad Brooks, who plays a more mature version of James “don’t call me Jimmy” Olsen; and, as billionaire genius Maxwell Lord, Peter Facinelli, a.k.a. papa vampire Dr. Carisle Cullen in the Twilight series.

On Saturday shortly before 11:30, both gents showed up at the town’s world-famous Superman statue for photo-op misadventures with the crowd. I don’t normally do a straight photo gallery with zero captions, but they made it hard not to.

Facinelli was up first, crawling under the Man of Steel’s legs from behind and then striking a pose. 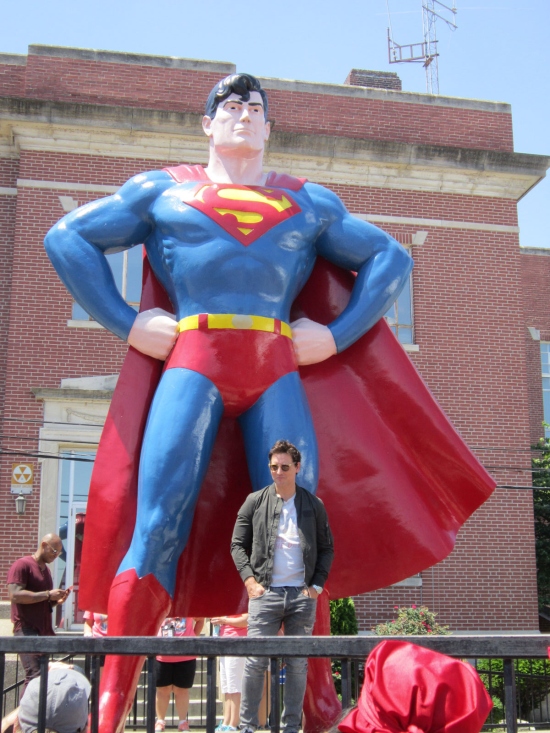 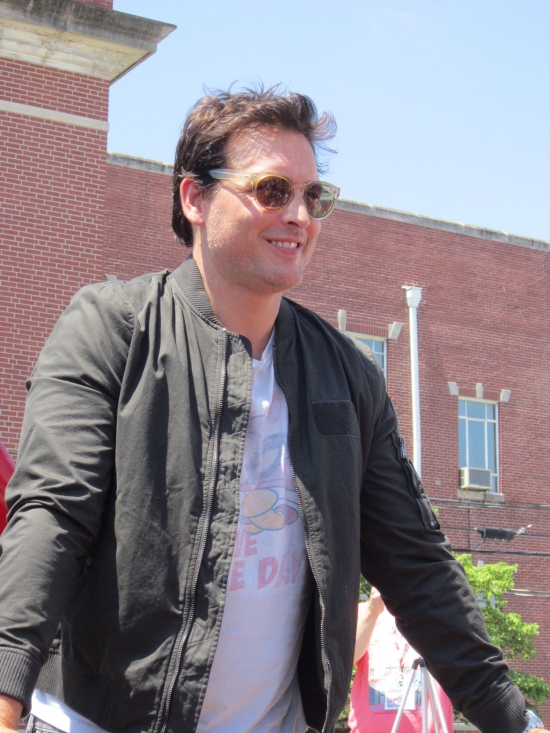 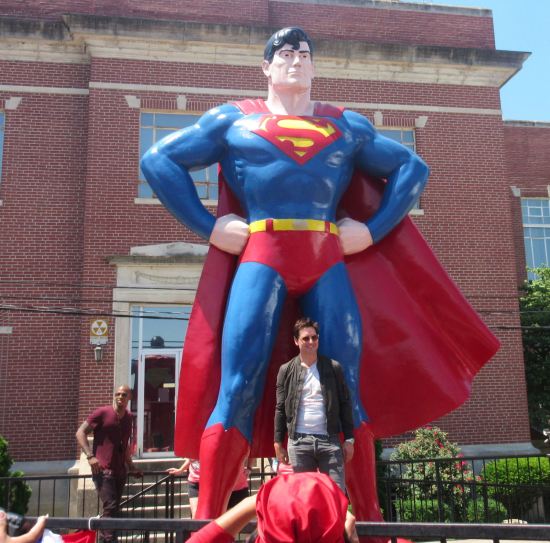 Then it was Brooks’ turn. He was a Calvin Klein model before he transitioned into acting in such series as The Game and Necessary Roughness, so the man knows his way around a room full of cameras. ‘Twas no simple task narrowing down all the photos to just a few greatest hits. Kara’s best friend James made this Superman Celebration look good. 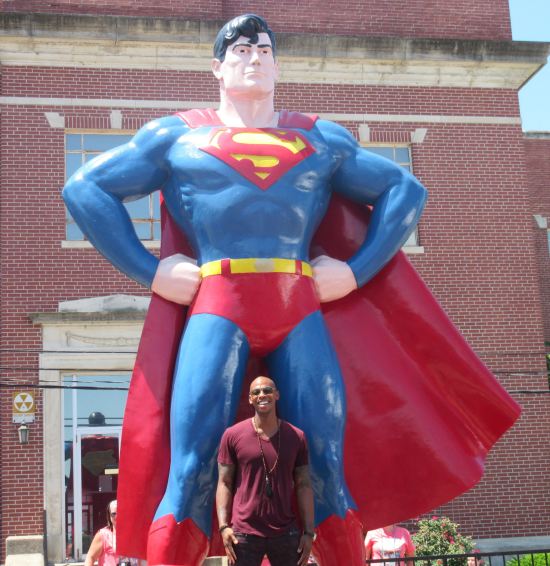 At one point a helpful volunteer got the smart idea of lending him a journalist-quality camera so he could pose as JAMES OLSEN, ACTION PHOTOGRAPHER. 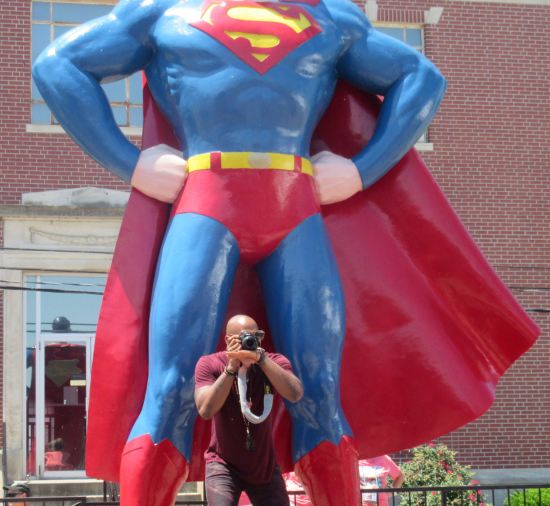 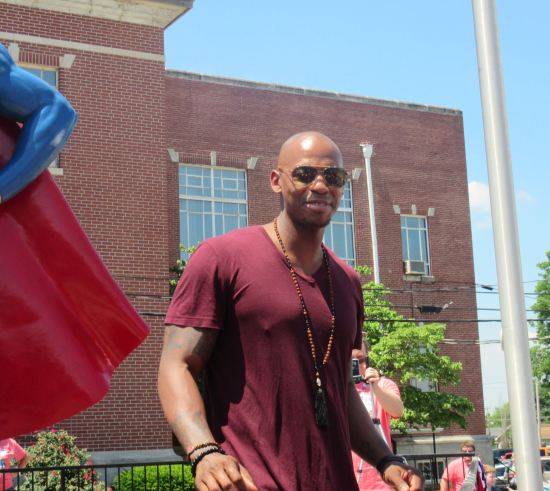 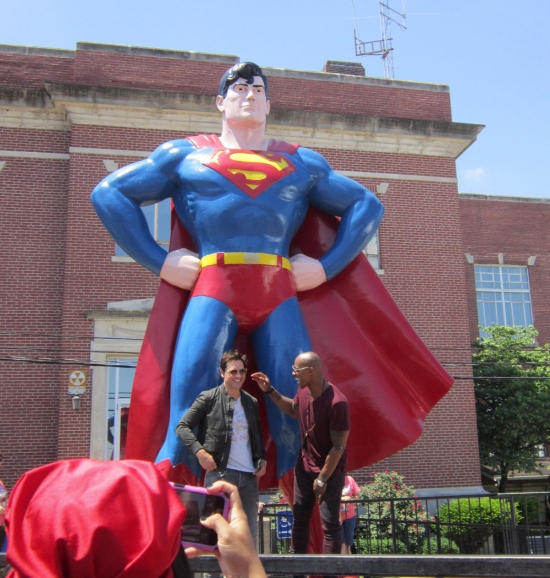 After our moment at the statue, Our Heroes adjourned to the main tent for a half-hour Q&A. Both men talked about the accident they had on set a while back, filming a scene in which Maxwell Lord has James captive and tied in a chair. Facinelli, tossing an ominous wrench from one hand to the other, lost his grip and watched helplessly as it nailed Brooks in the knee, sending him to the hospital and shutting down production for a few days. A deeply apologetic Facinelli later sent him a wrench set as a birthday gift. He was also asked what it was like working on Twilight, and what it was like playing a normal doctor on Nurse Jackie versus a much older vampire doctor.

When asked the common question about whether anyone plays pranks on the Supergirl set, Facinelli responded, “I like throwing wrenches at people. It’s pretty funny!”

One youngster asked if season 2 would see any Superman villains coming to National City. Brooks confirmed production resumes July 18th, but that the actors are powerless and know nothing about anything till the scripts arrive in their hands. A curious Brooks asked, “What villains do you want to see?”

Brooks, in a Serious Business tone like Santa taking requests: “I’ll see what I can do.”

Before all this came the fans’ photo ops with the stars. Session A was bright ‘n’ early at 9 a.m. We were there early to stake our place in line and catch their arrival circa 9:05, excited but feeling like some kind of amateur paparazzi.

Facinelli’s table was first. Nice guy, of course, nowhere near as scheming as that well-intentioned yet oft-vexing Maxwell Lord, though I was mid-pose and look goofy. 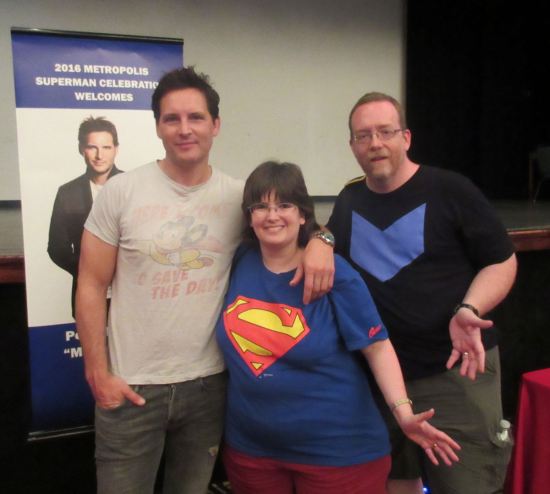 Next was Brooks. We gushed about the show and our appreciation for his version of the iconic Super-sidekick as an older journalist who’s been around for years, learned from his Metropolis experiences, and matured beyond the young gosh-wowie level that the character’s usually trapped in like amber. He responded with hugs…

…and then, in our own special fashion, we had to follow up with jazz hands. This is who we are and what we do.

They weren’t the only guests in town for this year’s Superman Celebration. And Brooks wasn’t the only Jimmy Olsen around. To be continued!

(Be sure to check out Part Two for pics of two more Jimmy Olsen actors plus other guests; Part Three for our epic-length cosplay photo gallery; and links to more chapters coming soon!)