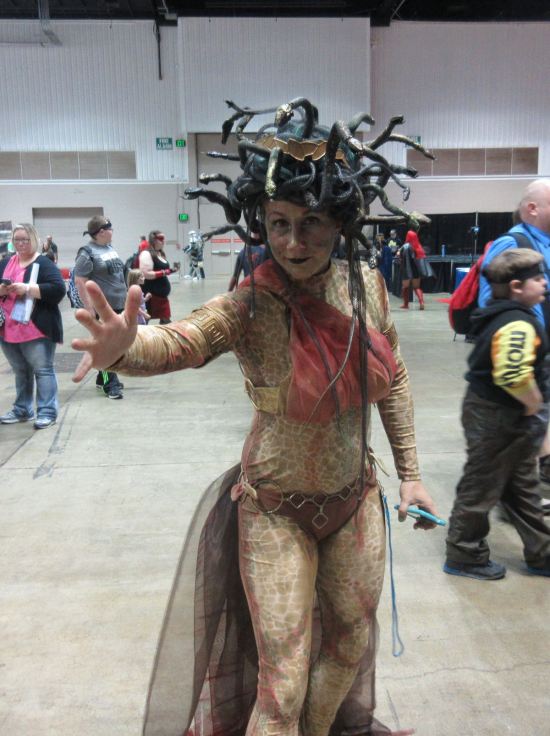 Best headgear of the year: Medusa from Clash of the Titans, giving me flashbacks to when I got scared watching the original at the drive-in.

Previously on Midlife Crisis Crossover: Friday and Saturday, my wife and I attended the third annual Indiana Comic Con at the Indiana Convention Center in scenic downtown Indianapolis. In Part One you saw every viable costume photo we took on Friday, with the emphasis once again leaning toward Deadpool because that’s what we’re running into, other than hordes of intricate anime characters we oldsters don’t recognize. Part Two was a Saturday selection featuring Bat-related characters and, one last time, all the Deadpools fit to print.

In today’s gallery: cosplay, cosplay, cosplay! All the other costumes we saw on Saturday that looked great and didn’t evade or outrun us. Obviously this is far from comprehensive and I’m still kicking myself with all my mental strength for missing one lady dressed as someone I recognized from the Authority. At one point I dwelt on this weird idea of renting booth space next year and offering to take free pics of any cosplayers who feel they weren’t photographed often enough, just for free posting here as a fun public service — no judging, no body-shaming, no rejecting just because Anne and I have no idea who they are. But I’m not sure how many cosplayers experience that kind of letdown at such shows anymore. Social media operating as it does today, every con probably now has ten “photographers” in attendance for every cosplayer. My idea was a fun pipe dream for the few minutes it lasted. Ah, well.

Regular readers won’t be shocked that I’m front-loading this entry with Final Fantasy. Welcome Lightning from FFXIII and Lightning Returns. 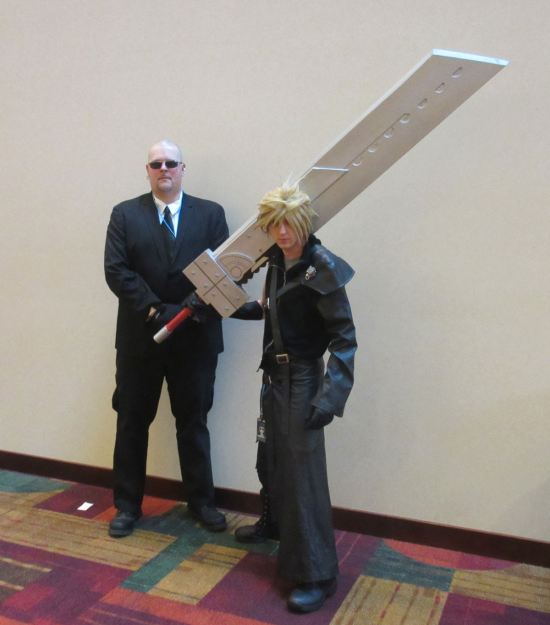 From Final Fantasy VII, it’s Cloud and Rude, who I had to think really hard to remember. Triple experience points to the guy for reviving that deep-cut supporting player.

Link, Zelda, Ganondorf, and li’l Midna from The Legend of Zelda: Twilight Princess.

The Portal debate rages ever onward.

The Red Skull wielding the Cosmic Cube. Or for you movie-only fans, the Tesseract. Whichever.

Fantomex, the only X-related character we tracked down.

Margaery Tyrell and Daenerys Targaryen from Game of Thrones. 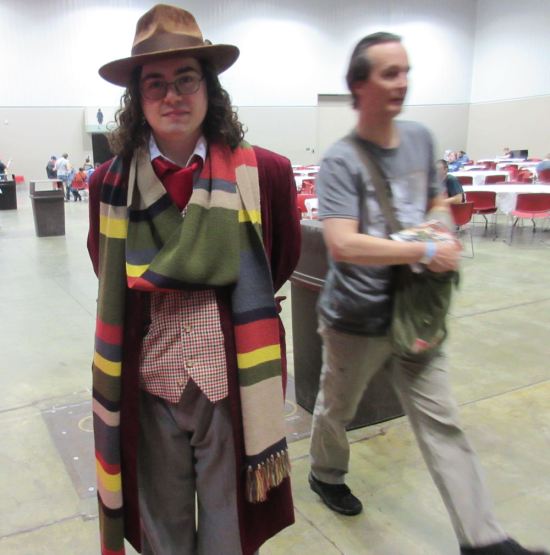 Naturally the Fourth Doctor was handing out free jellybeans. Non-poisonous and non-hallucinatory, I’m grateful to report.

At every con there’s always at least one unusual character whose caption is some variation on “looks cool who dis”.

Pennywise: every nightmare you’ve ever had.

Samurai! No, not the one from the Super-Friends, much to my wife’s regret.

Proof that there’s one reality in which Peter Pan and Captain Hook can just get along.

The section our friends have been waiting for: Star Wars costumes! Beginning with Rey, her probable Grandma Padme, and a Clonetrooper sidekick.

An encore performance from Rey and Padme, this time accompanied by the potential maternal missing link Endor Leia, some new Sith, and old Ben Kenobi hiding in the shadows and biding his time.

Sharing a photo-op line with us, this Emperor Palpatine rode around on some sort of gliding tech not unlike the Green Goblin we saw on Friday, so it looked as though he was using the Force to float around the con. Spookity!

I think it’s awesome that Rey was indisputably the most popular non-Deadpool costume we saw this weekend. This one’s accompanied by an inspired BB-8 that makes me want a set of Star Wars potholders in this exact design.

To be concluded! Next time: who we met and what we did…