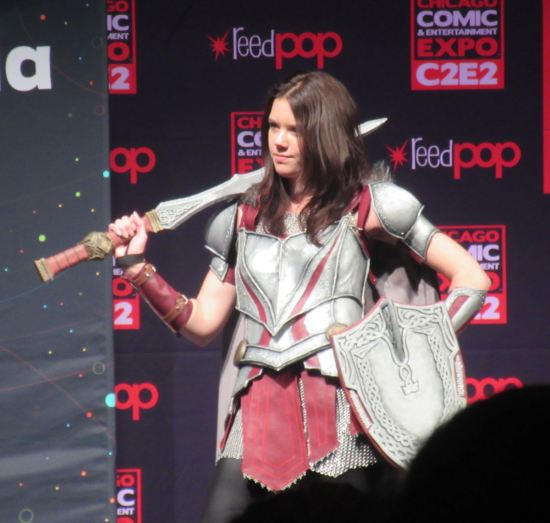 Thor’s best friend Sif took third place in the Comics division and won the special Fan Award, as voted on by any audience members who had a smartphone, any battery power remaining after a day of conventioning, and a working 4G/Wi-Fi connection. I was very happy for them, and especially for her.

As I type this, the sixth annual Chicago Comic and Entertainment Exposition (“C2E2″) is wrapping up this year’s three-day run, April 24-26, 2015. Each year C2E2 keeps impressing us more and more, inching ever closer to its goal of becoming the Midwest’s answer to the legendary San Diego Comic Con and other famous cons in larger, more popular states. My wife and I missed the first year, but have attended every year since 2011 as a team.

Over the next several entries, I’ll be sharing memories and photos from our own C2E2 experience, in all its splendor and difficulties. Caveats for first-time visitors to Midlife Crisis Crossover:

1. My wife and I are not professional photographers, nor do we believe ourselves worthy of press passes. These were taken as best as possible with the intent to share with fellow fans out of a sincere appreciation for the works inspired by the heroes, hobbies, artistic expressions, and/or intellectual properties that brought us geeks together under one vaulted roof for the weekend. We all do what we can with the tools and circumstances at hand. We don’t use selfie sticks, tripods, or cameras that cost more than a month’s worth of groceries.

2. It’s impossible for any human or organization to capture every costume on hand. What’s presented in this series will be a fraction of the sum total costume experience. That being said, please note MCC refutes the popular notion that every fan attends in costume. We appreciate those who do, but the general public believes it’s a mandatory masquerade and that cute but inaccurate perception is passé and declassé.

3. We didn’t attend Sunday. Sincere apologies to anyone we missed as a result.

4. Corrections and comments are always welcome, especially when it comes to any anime and/or gaming characters we elders-in-the-making didn’t recognize. I like learning new things, especially when I’m trying to write about characters and series that our generation misse.

First in line: the twelve winners and near-winners from this year’s C2E2 Crown Championships of Cosplay! Wikia and ReedPOP are conspiring to establish a corporate dominion over the cosplaying pastime, expand its increasingly formalized requirements into an international industry, and next year begin bringing overseas winners from conventions in India, Australia, Shanghai, and France in to Chicago every year for a higher-stakes world cosplay tournament. For the time being, thirty-two competitors faced off in four categories in front of three judges — a costume designer, a creature makeup artist, and a cosplayer who’s been on TV — for four-digit cash prizes.

(For MCC followers who’ll be sticking around with us after this special photo series has concluded, I’ll be revisiting some elements in that preceding paragraph at a later date.) 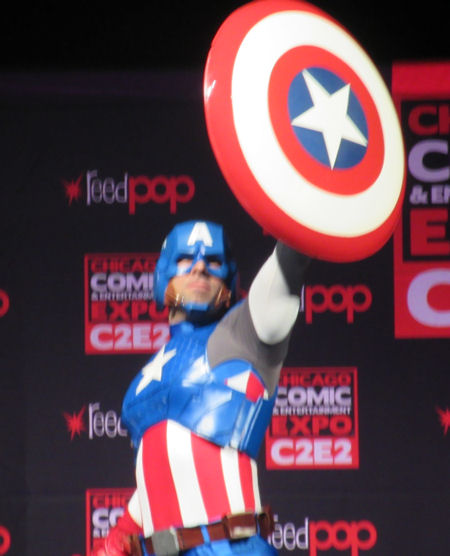 Comics division, first place: Groot. If the contestants had been allowed to speak to the audience, you can guess the complete text of his acceptance speech. 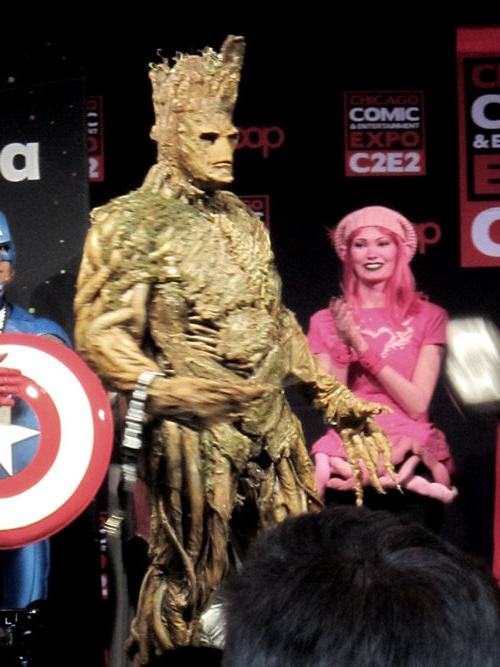 Anime/fantasy division, third place: the contestant’s own take on a Valkyrie of Norse myths. 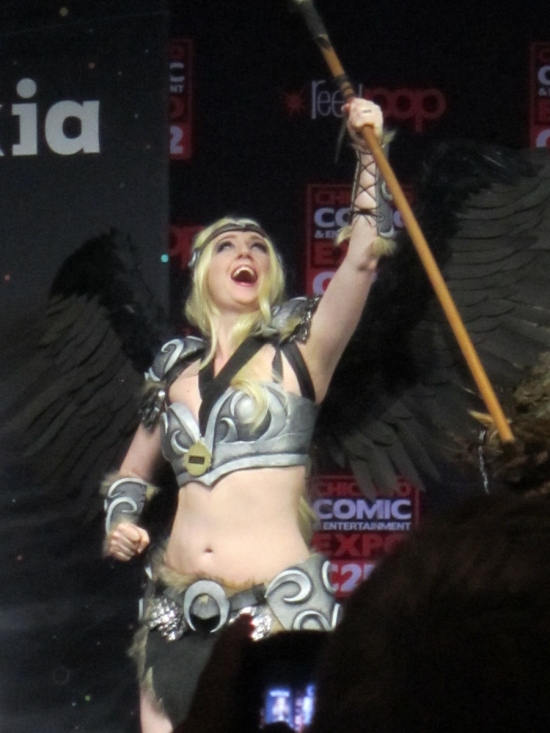 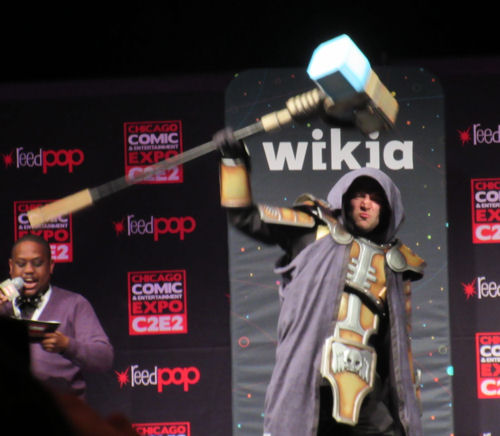 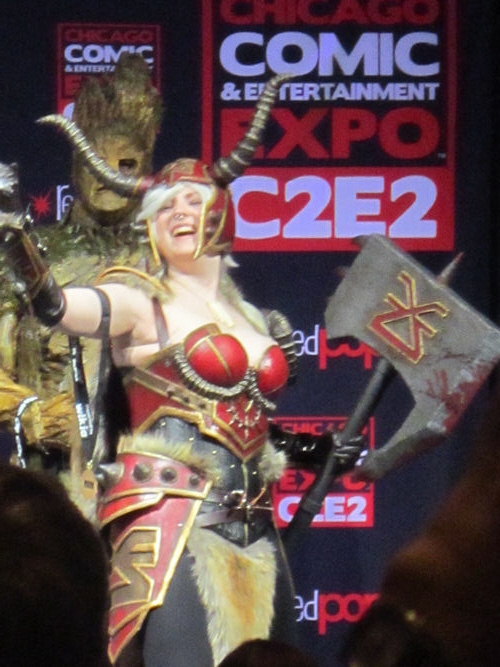 Video game division, third place: a Dovahkiin from Skyrim. After the contest she was sighted heading straight for the Hinterlands. 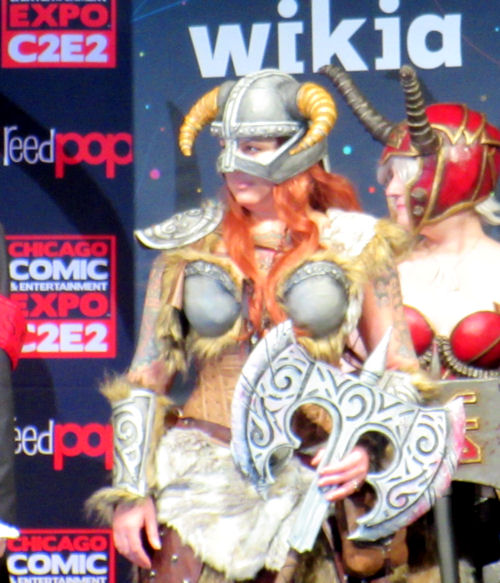 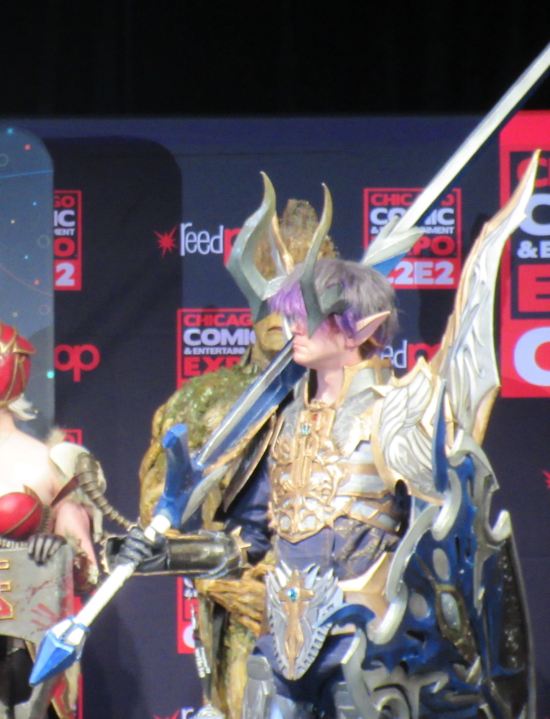 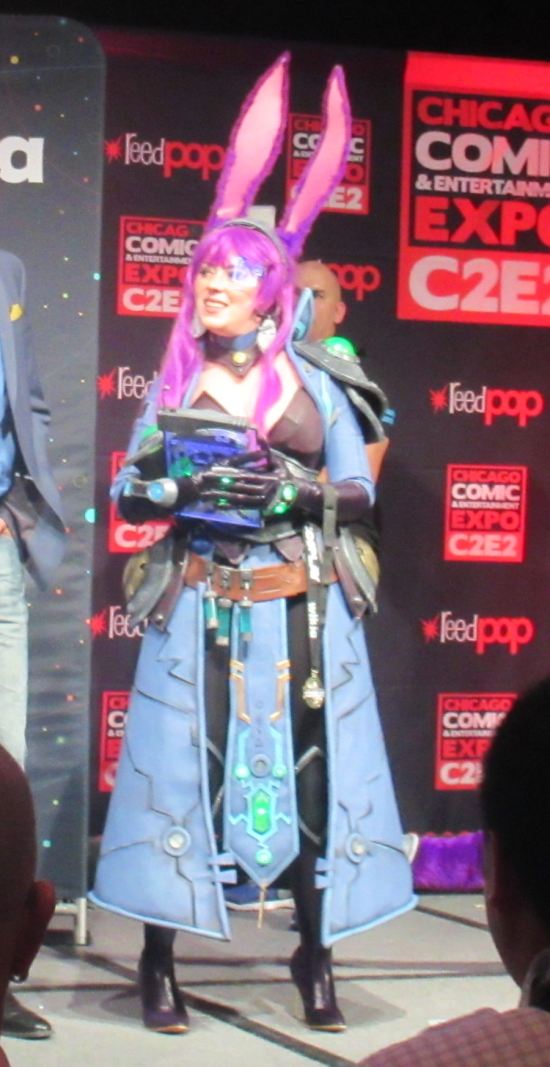 Movies/TV division, third place: Game of Thrones‘ Margaery Tyrell in her wedding dress. Her handler had to assist her onstage with her train and other complicated dress parts. 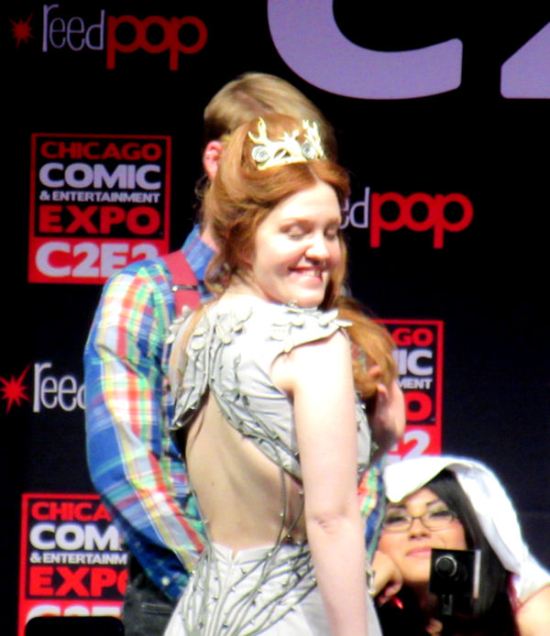 Movies/TV division, second place: Katniss Everdeen, who for some reason was not disqualified when she twirled around and her dress didn’t catch fire. 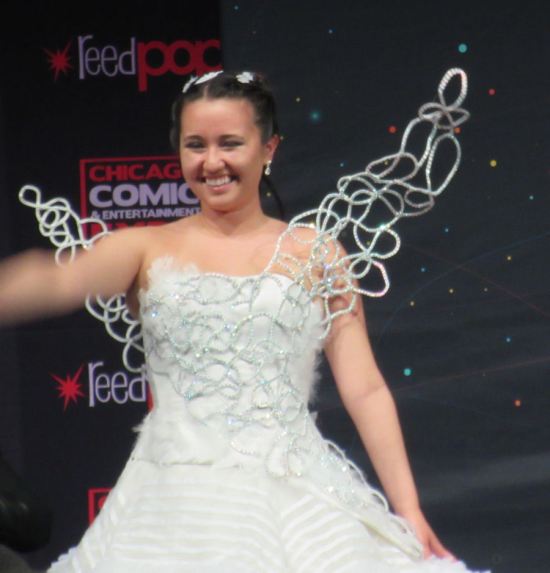 Movies/TV division, first place: a Silurian warrior from Doctor Who. She had the mask and the full-scaled makeup underneath. My wife and I totally approve. 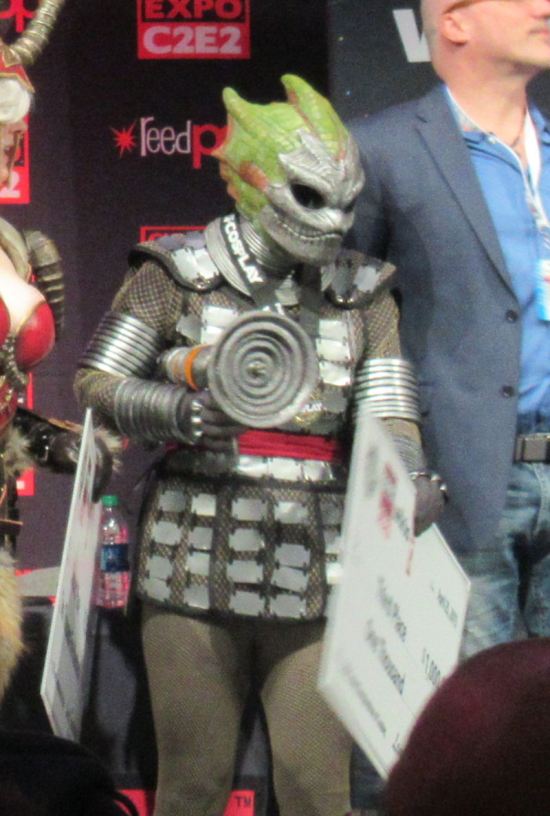 To be continued! Other chapters in the series: