A second round at the same breakfast buffet was a precursor to our long drive down I-35 North to the northern end of Minnesota. Along the way we zoomed past the official campaign tour bus of one Rod Grams. The Internet tells me in retrospect that he’s a former anchorman turned construction company president turned US Congressman who’s up for reelection this year, but at the time we didn’t know Rod Grams from Rod Flanders. Had I known, maybe we could’ve run him off the road and asked for an autograph. For want of a monster truck, a brush with greatness was lost.

Once again thanks to Roadside America, we didn’t stop till two hours down the road, a bit out of our way in the town of Cloquet, home of the only gas station ever designed by the one and only Frank Lloyd Wright. 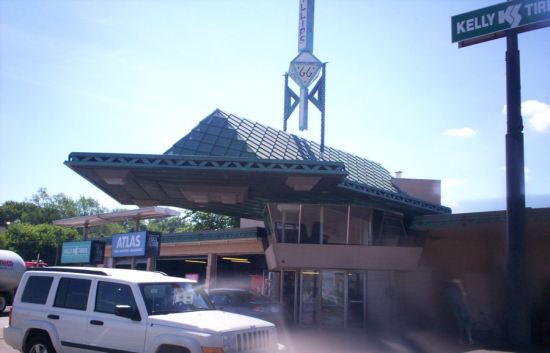 Suggested motto: “Get the right gas for your car at Wright Gas!”

I drove past the station twice because it didn’t have a neon road sign boasting its pedigree. The current proprietors don’t seem remotely interested in its off-kilter architecture (it’s got an observation deck! How superfluously cool is that?), or in tourists, or in kitsch, or even in the 21st century. Their pumps are decades old, as I discovered when I pumped my own gas without realizing this was a full-service station. We haven’t had one of those in Indiana in years. The Hoosier kids these days with their pay-at-the-pump conveniences missed out on this tradition. Time was, our gas station attendants didn’t just brew coffee and guard cigarettes. In the days of my youth, they came out to the car, pumped your gas for you, sometimes even washed your windows and checked your fluids. They could be knowledgeable and helpful about your car issues, and had more to offer than lottery tickets.

I saw no “Full Service” sign anywhere and didn’t stumble onto that secret till after I’d pumped my much-needed gas and walked into the station, searching in vain for the front counter and the cash register. The attendant, who’d been busy fixing something in the garage, came out to greet us, was slightly flustered that we’d already pumped our own gas, but cheerfully gave me change for my purchase out of his own pocket. I wonder if they’d even have accepted credit cards. I’m also not sure which baffled my son more, the whole “full service” concept or his dad’s insistence on taking photos of a gas station.

Afterward, onward, eastward, past two different Paul Bunyan statues we didn’t stop to gawk at, we drove toward the city of Duluth on the shore of Lake Superior. Just outside the city limits we stopped at a gorgeous rest stop on a hill overlooking the entire city as well as the edge of the lake and the bulk of Superior Bay.

I have no idea what this metal siding on sticks is supposed to be. Buy hey, that view.

Pay no attention to that dying grass between the pretty flowers and the prettier Great Lake!

If you ask the staffers at the desk for info about the city, they’ll hand you a heavy bag full of pamphlets, booklets, and coupons for just about every single commercial business in Duluth. I wish I’d had all of this info at my disposal before we’d left on vacation so I could’ve planned the day better. For whatever reason, I’d had almost zero luck finding anything to do in Duluth beforehand. We knew we wanted to see Lake Superior, but beyond that, we were near clueless. This gift bag was certainly generous, but not timely enough to be helpful.

Beyond the rest stop, we made our way to our only other intentional Duluth sight beside Superior: the Great Lakes Aquarium, yet another concession to my nature-loving son. More accurately summed up as a Great Lakes Historical Society and Eco-Advocacy Headquarters, most of the exhibits educate and expound upon the theoretical formation of the lakes, the lifestories of their indigenous species, the ongoing efforts to preserve and sustain the ecosystem, and other factoids and trivia most useful to the average social-studies class on a field trip. Also present in disturbing numbers are beaming tributes to local industries, as if they demanded equal space and time to rebut the mild finger-pointing in their direction. Beyond the petty inter-exhibit squabbling, the “aquarium” holds just enough fishtanks to justify their name according to FDA regulations, but the grand total of fish on display was on par with the Department of Natural Resources exhibit at the Indiana State Fair.

Sample aquarium fish. This was the best shot in our collection.

That being said, the Aquarium had its commendable highlights. A traveling exhibit called “The Abyss: the Great Unknown” offered a selection of spookity lifeforms from the depths thousands of miles below sea level and sunlight. Most eye-popping — in possibly more than one way — was the ratfish, born with an additional sexual organ on their foreheads. Ponder the ramifications and see how many SNL skits you can develop out of that one.

This is not a ratfish. This is a blurry jellyfish. This was our second best photo of the set.

A pair of cute widdle otters share a glass display with a small waterfall and all the snacks they can grab in exchange for performing for customers every few hours on cue. Contained in one thigh-level circular tank were a pair of small stingrays you could reach in and touch — in fact, the signs encouraged it. My son reached in and stroked one along its spine, just as instructed. It hissed at him. He was disappointed with marine life in general.

The aquarium also had an outdoor balcony that allowed pleasant views not only of Superior Bay, but also of the nearby architectural oddity called the Aerial Lift Bridge.

Bridges don’t normally excite us, but…I dunno. It was just different. Maybe because it basks in Superior’s glow.

Built many decades ago almost surreptitiously to circumvent a local zoning dispute between disgruntled neighborhoods, the bridge is unique in that — rather than split in twain like a pair of saluting ramps whenever ships need to pass in and out of the bay, just as most such bridges do in movies right before Our Hero uses a car or motorcycle to jump Knievel-style from one half to the other — the entire bottom of the bridge ascends as one solid section, an elevator the size of a city block.

The view from the other side. And a decorative anchor.

Admittedly, it’s more effective to see this happen live rather than to look at photos and try to imagine the big deal.

To be continued! Next time: the Lake Superior.

I deleted one superfluous, uninformed paragraph of wonderment at the Cloquet gas station’s full-service model. Not until later vacations would we learn that a few states such as New Jersey still have full-service gas stations and, in fact, have outlawed self-service. This is weird to us.]