This weekend our starstruck hometown of Indianapolis hosted the 46th edition of GenCon, one of America’s oldest and largest gaming conventions. Be it RPGs, tabletop games, TCGs, dice games, family board games, or (a smattering of) video games, your gaming preferences are tended to at GenCon. Try a new game, pick up supplies for your current campaigns, spar with gamers from other lands, or just wander the premises and soak in as much as you can.

Attendance in 2012 exceeded 40,000 — not quite DragonCon numbers and a far cry from the San Diego Comic Con, but it’s certainly one of Indy’s largest annual downtown events (GenCon is gunning for your title, FFA Expo), consuming not only the entirety of our Indiana Convention Center but conference rooms and miscellaneous spaces in several nearby hotels and other unused commercial structures. For four days every year, GenCon is everywhere downtown.

This was my fourth GenCon and my wife’s third, even though we’re not certified pro gamers. Some of our personal geek interests intersect with enough of the available exhibits, dealers, and special events that we’re rarely bored except in the occasional line, but those come with the territory. For extra family fun, this year was our first time escorting our nephew into the fray, letting the overwhelming sights and sounds puncture new holes in his mindset, pausing every so often to give him time to shop for new Yu-Gi-Oh! cards and accessories to augment his existing arsenal.

We begin our retrospective with (most of) the winners from GenCon’s 28th annual costume contest. Caveat for newcomers to MCC: some of our photos aren’t the greatest ever. The 500 Ballroom is always poorly lit before and after the contest, even moreso during. Flash photography was forbidden, largely to ruin the day for us well-meaning amateurs. I’m trying to content myself with the surprise fact that more of our shots succeeded than usual, as will be seen over the course of this miniseries. This is something we enjoy doing, to show our appreciation and awe for those with the flair for this particular aspect of the scene. We apologize in advance for the costumes we missed, and for the opportunities we blew because of our numerous limitations.

Comments and especially corrections are always welcome and appreciated. I’m not plugged directly into every single geek scene out there. Very few geeks are, even the famous ones with their own YouTube channels. If you notice any wanton acts of mislabeling, please don’t hesitate to call me out. I enjoy learning about new worlds and universes, giving credit where it’s due, and dispelling my old man’s ignorance.

Onward, then: this year’s Audience Favorite: Sarah Kerrigan and two Space Marines from StarCraft. They also won first place in the Professional Division. I have no idea how they moved or survived in those things.

Professional division, second place: steampunk Ghostbusters, several of whom we’re certain have graced this stage before, but now featuring Steampunk Zuul, Steampunk Possessed Dana, and Steampunk Sta-Puft Marshmallow Man. Yes, that’s a costume with a live human inside, not a stuffed carnival prize. Hacking into it to make s’mores was strictly forbidden in most cultures.

Pot luck, second place: Dave Stevens’ Rocketeer — one of two caught on the premises that day.

Pot luck, first place: the tenth Doctor Who and Captain Jack Harkness, quite the couple. (First in a series of our pics I’d like to subtitle, “I just assumed your version would come out fine!”)

In the Group Division, second place winners were an ensemble of steampunk characters starring steampunk robot.

Group Division, first place: an Inquisitor and his acolytes from Warhammer 40,000. At far right, Doctor Who #10 doffs his trenchcoat and peeks in for some much-needed focus. 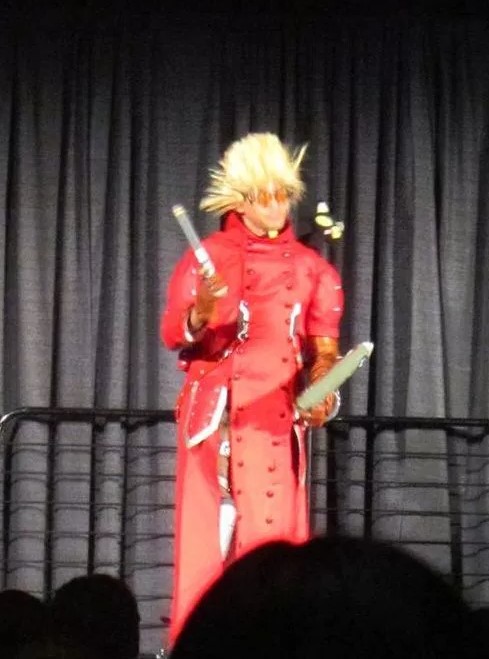 Fantasy/Historical Division, first place: Red Sonja. And all the Gail Simone fans in the world rejoiced.

Winners of the Golden Needle Award for excellence in fashion design: four members of the cast of Rurouni Kenshin, who also performed a Jerry Springer parody sketch.

Winners of the Staff Favorite award were the three wizards from Lord of the Rings. In reviewing our files, Saruman won Most Photogenic of the three. 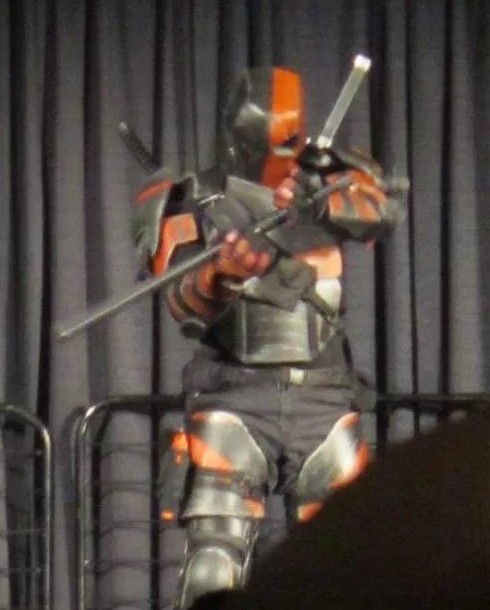 Kids Division, second place: the Wreck-It Ralph spoiler version of Princess Vanellope von Schweetz. Neat trick with this one: the Princess regalia was removable, revealing Vanellope’s plain-Jane attire she wore in the rest of the film.

Sci-Fi and Super-Heroes Division, second place: this living TARDIS, along with a large Dalek manned by a surprisingly young lad of age five or six. (Bonus costume for this entry at far left: a Fringe Observer!)

Sci-Fi and Super-Heroes Division, first place: Godzilla versus Gorghadra from the game Monsterpocalypse.

Listed for the sake of completeness are the other winners in these categories who successfully evaded our cameras. MCC management sincerely regrets the following omissions: