Autumn motifs are inevitable in Anne’s October birthday trips. Ironically, Anne isn’t even a huge Halloween fan (she saves her holiday love for December), but on our walk to go check out one of Corydon’s proudest monuments, we noticed the number of residents who’d decorated for the occasion well outnumbered the few pitiful celebrants on our own street back home. I admittedly took my sweet time setting up our own display this year, but at least we have one. It was nice to find the spirit of the occasion hasn’t been exorcised from all neighborhoods.

In addition to our annual road trips, my wife Anne and I have a twice-yearly tradition of spending our respective birthdays together traveling to some new place or attraction as a short-term road trip — partly as an excuse to spend time together on those most wondrous days, partly to explore areas we’ve never experienced before. We’re the Goldens. It’s who we are and what we do.

In October 2022 Anne turned 52. Indiana offers no shortage of tourist attractions for history aficionados like her. We’ve visited quite a few of those over the years, but this year we felt it was time to check off one of the Hoosier State’s biggest trivia answers: Corydon, our original state capital before Indianapolis… 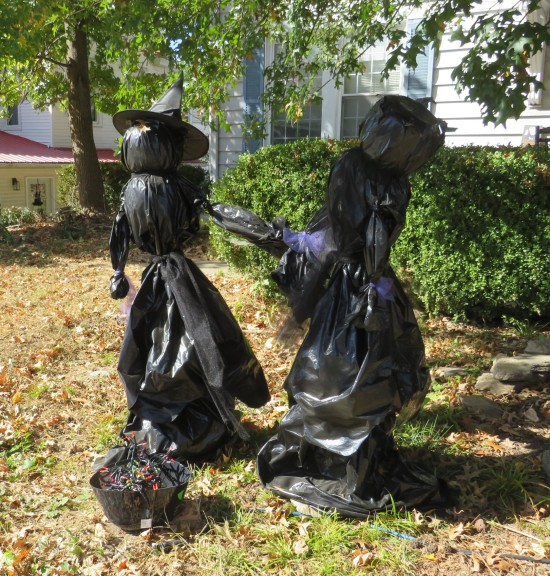 Trash bag witches a couple doors down from the Beetlejuice tribute.

Someone crash-landed on their broom.

Looking for spooky reads? The Harrison County Public Library has suggestions for kids.

The Beetlejuice yard shared the corner with another of Corydon’s historical markers, albeit one carved decades before the modern historical-marker format became the standard. The Indiana Territorial Marker sits on what was once the site of the log home of Harrison County’s first clerk, George Pope, circa 1809. Two years later the county bought the place from Pope for $500 and renovated it for use as a temporary courthouse. From 1813 to 1816 the same building would serve as the capitol for all of the Indiana Territory. When President James Madison promoted us to statehood in April 1816, the lawmaking functions shifted to another dedicated building, which we’ll get to in another chapter. 43 delegates from 13 of the 15 original Indiana counties then assembled in the old courthouse to write our state Constitution, much of which was copied over from the existing Ohio and Kentucky Constitutions. Among other forward-thinking components, it outlawed slavery and contained an education-related clause that effectively mandated the creation of Indiana University (simply “IU” to us Hoosiers).

The marker, which summarizes that entire previous paragraph, was low to the ground and hard to spot until we realized we were standing next to it.

Paraphrasing other people’s legal documents can be challenging work, especially when 43 different collaborators are fussing over the verbiage and calligraphy. The June weather got so hot in the pre-A/C era that they all agreed to leave the courthouse, walk down the street and continue their work under the shade of a large elm. In that very spot their work was finished and Indiana nabbed its statehood achievement trophy. In gratitude for services rendered, by which I mean all that cozy shade it gave, the newly dubbed Constitution Elm was commemorated ever after, revered as a symbol of the problem-solving collaborations that led to both our finalized groundwork of local democracy and avoidance of 43 cases of heatstroke.

Alas, tragedy struck when the beloved tree died of elm disease in 1925. At the time of death it stood fifty feet tall, five feet in diameter, and spread its branches out to a 132-foor canopy. Its soul moved on to the arboreal afterlife, but the townspeople refused to let its corporeal form wither away, apart from the limbs that beetles and other pests had already infested. The local chapter of the Daughters of the American Revolution, in charge of its preservation, had all the limbs removed and turned into souvenirs, had the still-formidably-sized trunk soaked in creosote, and threw a roof over it. In 1936 a sandstone monument was built over and around it. Thus what’s left of it remains today in Corydon, rechristened the Constitution Elm.

Lo, that mighty elm, within the solid rock it stands.

Here’s all five feet of Anne standing at its side for size comparison. I have no idea why the camera aperture spontaneously widened to give the appearance of a solar flare. 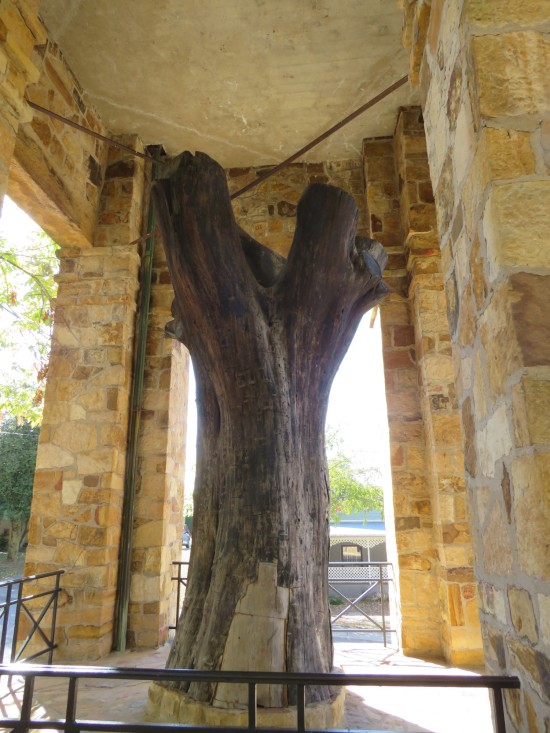 The rear view of the Elm. Its most recent renovation project was in 2012, in time for Indiana’s Bicentennial, so it’s fairly refreshed for the time being.

At the end of the street, Big Indian Creek runs past trees that seem to be resisting the call of autumn.

Parallel to the creek are unpreserved vestiges of the Corydon Scenic Railroad, a tourist attraction that shut down in 2003 among other casualties of the post-9/11 recession.

Behind the Elm stood yet another historical remnant. Built in 1807, the Westfall House is the oldest of all remaining structures in Corydon, a cabin owned by a tanner and War of 1812 veteran. It was later owned by Colonel Lewis Jordan, a commander at the Battle of Corydon, which we’ll cover in a later chapter. The Westfall House appears kept up on the outside, but its private owner lives in Ohio and hasn’t opened it for public tours.

With a little work and TLC, I bet this place could make an awesome Halloween haunted house.