Well, except during raging pandemics before vaccines are ready. Or when one of us isn’t in the mood. Last October when it was her turn, Anne wanted to keep her special outing simple — a single day spent together here in town.

We managed to find some pretty things for the occasion at Newfields, the institution formerly known as the Indianapolis Museum of Art. Last year they emptied out their top floor and converted it into a temporary, floor-wide installation with a very different approach to art. Instead of hanging paintings on the walls, they turned out the lights, turned the walls into projection screens, and filled the place with a rotating array of blown-up paintings. The montages emphasize the works of Vincent Van Gogh, but other Impressionists might be in the mix, along with works from at least one other continent altogether.

Welcome to the Lume.

The Lume, which was launched last year, is scheduled to end May 30th. I figured it was time to stop procrastinating and share these before it was too late. I blame our 2021 vacation pics for taking me too long to work through.

My original plan was to research and/or Google Image the paintings they used and identify them one by one, because I prefer giving credit where due. But I suspected the necessary time expenditure versus total number of readers who might genuinely appreciate the effort would be disproportionate.

I also couldn’t figure out how to break this into separate galleries. This entry is twice my preferred gallery size because of everything I wanted to include, such as this floor flower opening at my feet. 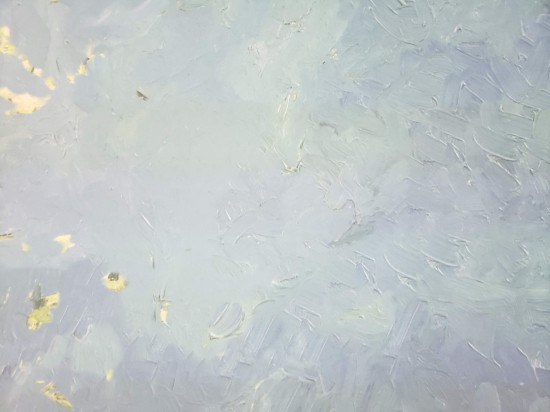 Or this closeup of artists’ brushstrokes writ large, like you’re an ant crawling across a dried canvas. 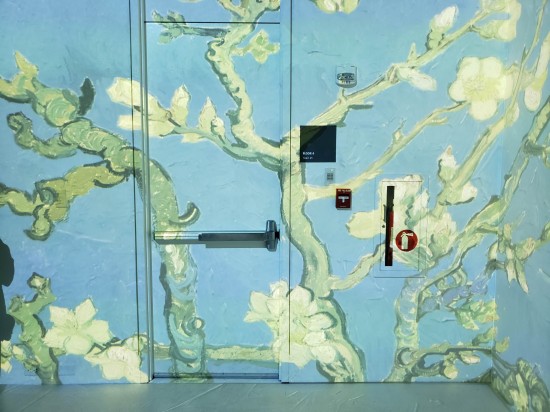 Even the emergency exit is suitably festooned.

The Japanese works likewise receive the closeup treatment, like examining techniques under a microscope.

Speaking of which: one of Van Gogh’s self-portraits, before the infamous lopping. 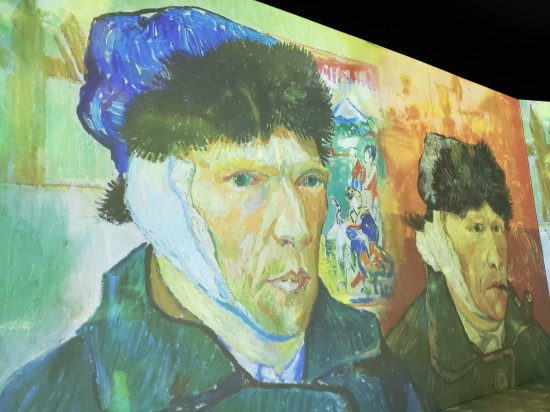 His “after” self-portraits took on new context when I recently watched Akira Kurosawa’s Dreams, in which a wounded Van Gogh is played by actor Martin Scorsese. 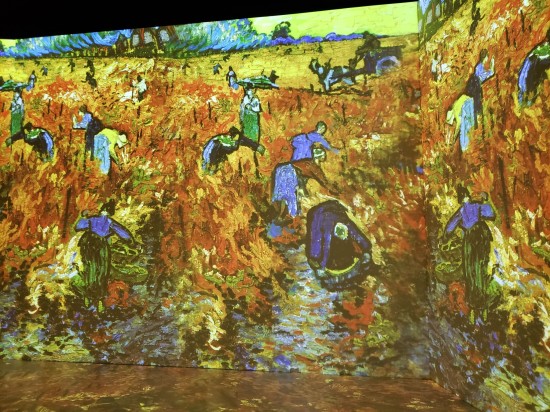 So yes these could’ve been shared in a more timely manner. If I could still get by on four hours’ sleep per night, my blogging to-do list would be far shorter by now.

My apologies for failing to research the credits — which Newfields themselves provided nowhere in sight — but now we can delegate that fun to You, the Viewers at Home! 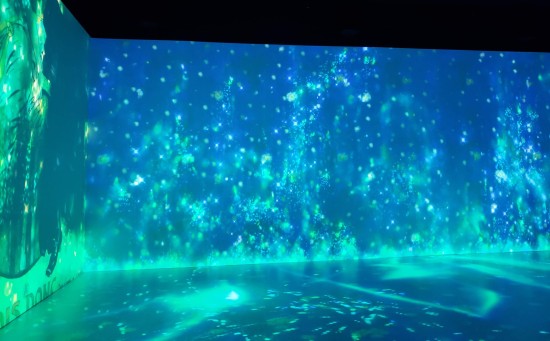 How many of these unlabeled paintings can you recognize? Name three or more, and you owe yourself a freshly baked cookie!

Sure, I could’ve posted some or all of these on Instagram. I shared one both there and on Facebook. Nobody cared. 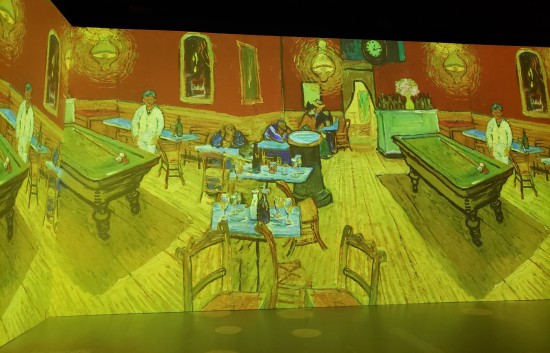 I grow weary of using hashtags to beg for attention from strangers out in the wild, but it’s even more wearying to do the same on Facebook with those who “know” you. So this gallery stayed bottled up. Until now.

Or I could’ve borrowed a shtick from other bloggers and simply blogged one photo per day here for months. Short entries have never been my style, though, not even back when I was posting every single day.

Hence the large photo dump. Because I can! The “smaller galleries” rule of thumb is mine to flex at will. 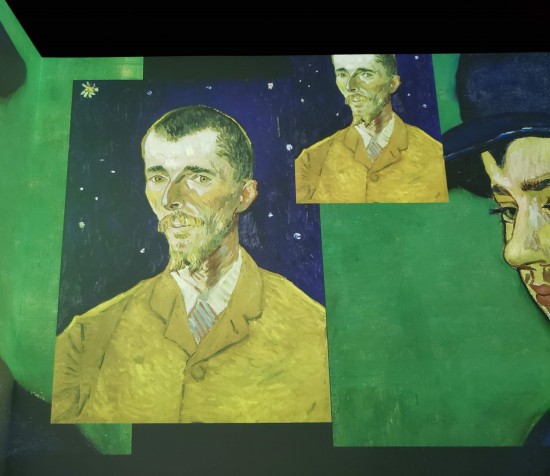 Today due to illness, Martin Scorsese has been replaced by Christian Bale.

In several shots not just the walls are our subjects. Silhouettes of other patrons reveal their reactions to total translucent immersion.

Some sped through at normal walking speed, like any ordinary museum. Some couldn’t put their phones down.

Some sat and dwelt in a transfixed euphoria.

Later in the path, a series of mirrors accentuate the carnival fun-house ambiance. 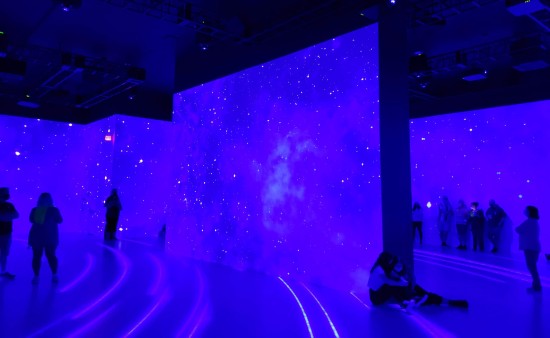 Not every backdrop was a painting. Cameos by actual nature were a sort of intermission between artworks.

Anne leads the charge down a hallway through a starry night.

Speaking of which, the feature presentation, by which I mean the one Van Gogh everyone knows, “Starry Night”. 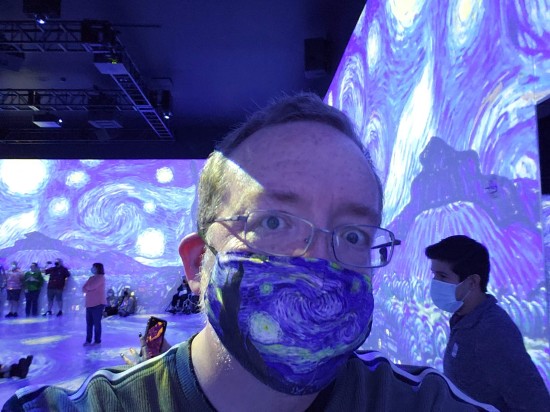 Masks aren’t required in the Lume as of May 2022, but they were as of October 2021. I accessorized for the occasion. 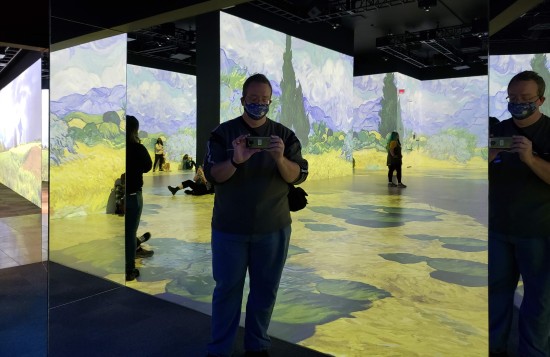 I also indulged in some selfie fun, which you’ll note is an extreme rarity for me on any site.

Perhaps “indulged” is too soft a word.

Portrait of the writer by his wife. 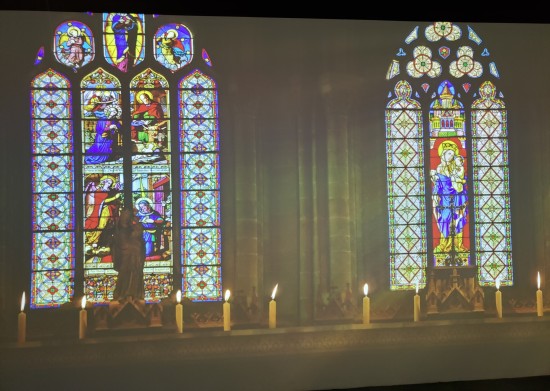 All told, quite the enjoyable experience to walk through aesthetics of a bygone century that persists unto today, remixed for future generations.

The Lume has certainly given Newfields a shot in the arm. I’ve never heard it come up in conversations quite so much as I have this past year. 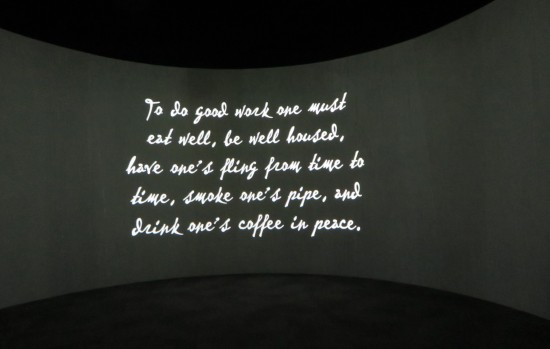 I’m unclear what comes next after this ends May 30th, whether they swap in a new set of paintings or trash the whole of it and go back to the old content. 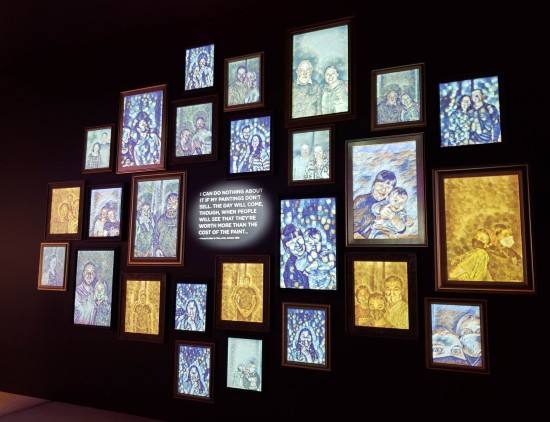 But wait! There’s more! Near the end, special cameras let patrons turn themselves into paintings, each momentarily displayed in a collage among others.

Sure, our phones and camera software have filters for DIY mementos, but sometimes it’s fun to enjoy freebies, despite the selfie ring light glare reflecting in our glasses.

Also at the end of the line: actual paintings! Such as Van Gogh’s 1890 “Sheaves of Wheat”.

A life-size diorama of Van Gogh’s three “Bedroom in Arles” paintings. We saw the second one in person in Chicago back in May 2019.

One more Van Gogh quote and some line art.